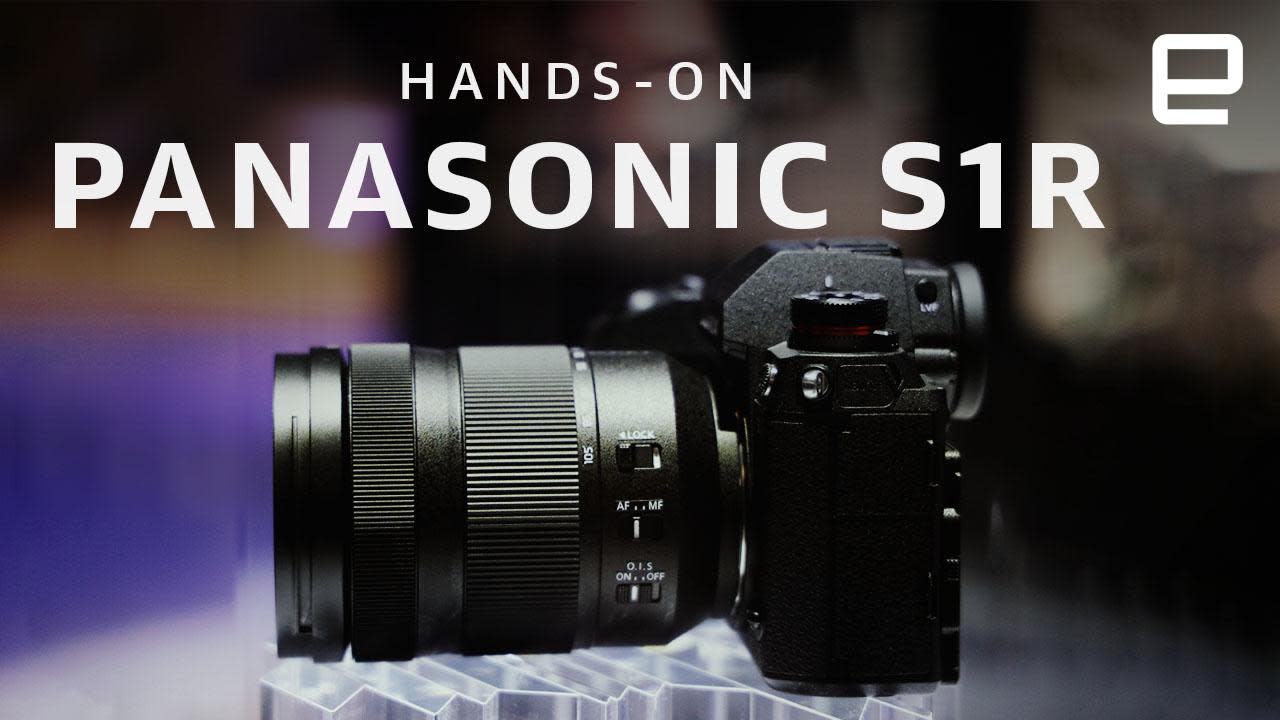 Yesterday, Panasonic made a big splash by announcing the L-Mount alliance with Leica and Sigma, and unveiling its first full-frame mirrorless cameras, the Lumix S1 and S1R. The 24- and 47-megapixel cameras, respectively, are still prototypes and the specs aren't final, but they look promising. Both have built-in image stabilization, a large, high-resolution EVF, triaxial tilt LCD for both selfie photographers and vloggers, the highest flash sync speeds on the market, and double slots for SD and XQD cards.

We were able to get our hands on the S1R, and although the camera was non-operational, the design and layout are nearly final. As such, I was able to check out the handling of the camera and compare it to Panasonic's flagship GH5. So far, in terms of dials and buttons, I prefer it to what Canon and Nikon have done. Where Canon tried some bold layout changes on the EOS R, Panasonic has stuck to a more traditional and more tactile layout.

The L-mount is 50mm, smaller than both Canon and Nikon's RF and Z-Mounts. Panasonic said that won't affect quality, however, and pointed out that L-Mount designer Leica invented the 35mm camera. It emphasized that both cameras will be great for video, though it believes that the 24-megapixel S1 will be more desirable for 4K shooting. With a 47-megapixel sensor, the S1R will handle video well, but will be more targeted to landscape, portrait and other photographers that need the extra resolution.

Video shooters get both a microphone and headphone jack, matching full-frame models from Sony, Nikon and Canon. The rear LCD is a "triaxial tilt" model, but a representative told us that it will be hinged and flip out as well -- a must for vloggers or selfie-takers. The viewfinder will be a very high resolution model, and Panasonic promised it will be one of the best on the market. The autofocus system is a contrast- and not phase-detect system, unfortunately. Panasonic said it will use "depth from defocus," which sounds similar to what Leica offers on its SL and TL mirrorless cameras. Panasonic supports both XQD and SDXC, but each card has a dedicated slot, so if you want to have a backup during shooting, you'll need both types of cards.

Though the S1R feels smaller than Panasonic's GH5, it's actually a touch bigger, and the control layout is slightly shifted. The joystick and dial controls for shutter and aperture are in roughly the same spots. However, mode dial and AF lock control are shifted to the left and there are fewer function buttons. The record button is now on the back, rather than the top. Finally, there's a top LCD that displays useful information, much like on Canon and Nikon's new models. These changes aren't too crazy, but will take a little getting used to.

Panasonic hasn't finalized the specs, so there are a few key things we don't know yet. For instance, it hasn't yet said whether video can be recorded externally or internally at 10-bit 4:2:2, like the GH5 and GH5s. Given Panasonic's history, I'd bet on that, however.

We also don't know, of course, the image and video quality, nor the autofocus performance and other key specs. As for the price, that's still up in the air, but the S1 and S1R strongly resemble the Sony A7 III and A7R III, which cost $2,000 and $3,200, respectively. Nikon's Z6 and Z7 cost $2,000 and $3,400, while the 30.1-megapixel Canon EOS R is $2,299. All those factors, obviously, are crucial to how the camera will be accepted by the market, so we'll reserve final judgement until we learn more and get a hold of the final product for a full review.

In this article: cameras, full-frame, gear, L-mount, LumixS, LumixS1R, mirrorless, Panasonic, photokina2018, S1, S1R, video
All products recommended by Engadget are selected by our editorial team, independent of our parent company. Some of our stories include affiliate links. If you buy something through one of these links, we may earn an affiliate commission.