The E Ink typewriter is now portable and a bit cheaper.

Many authors can attest that writing isn't as simple as just sitting down at a computer and typing. A typical day might go more like this: Check email, look at Facebook, tweet. You know, anything but actual writing. Astrohaus' Freewrite E Ink typewriter was designed to combat these distractions by removing the internet from your view entirely, though you could still save your files digitally. However, its clunky console had nothing on the portability of a laptop. But this spring the company will ship the Freewrite Traveler, a lighter clamshell model that lets writers easily take their craft wherever the mood strikes them.

The original Freewrite design had a squarish profile equipped with a mechanical keyboard on the front end and the e-ink screen toward its rear. The Traveler keeps the keyboard and the screen but packs them into a design that can be folded up and slipped into your bag easily.

It's also lighter: The Traveler is 1.8 pounds, down from the original's four. However, you'll still have to deal with a one-inch thickness, thanks to its keyboard setup. The smaller profile means that the Traveler couldn't keep its sibling's Cherry MX Brown mechanical keys, but the custom switches Astrohaus has packed into this new portable model still feel pretty good. Fans of the original will probably notice the difference, but that's the trade-off for increased portability. 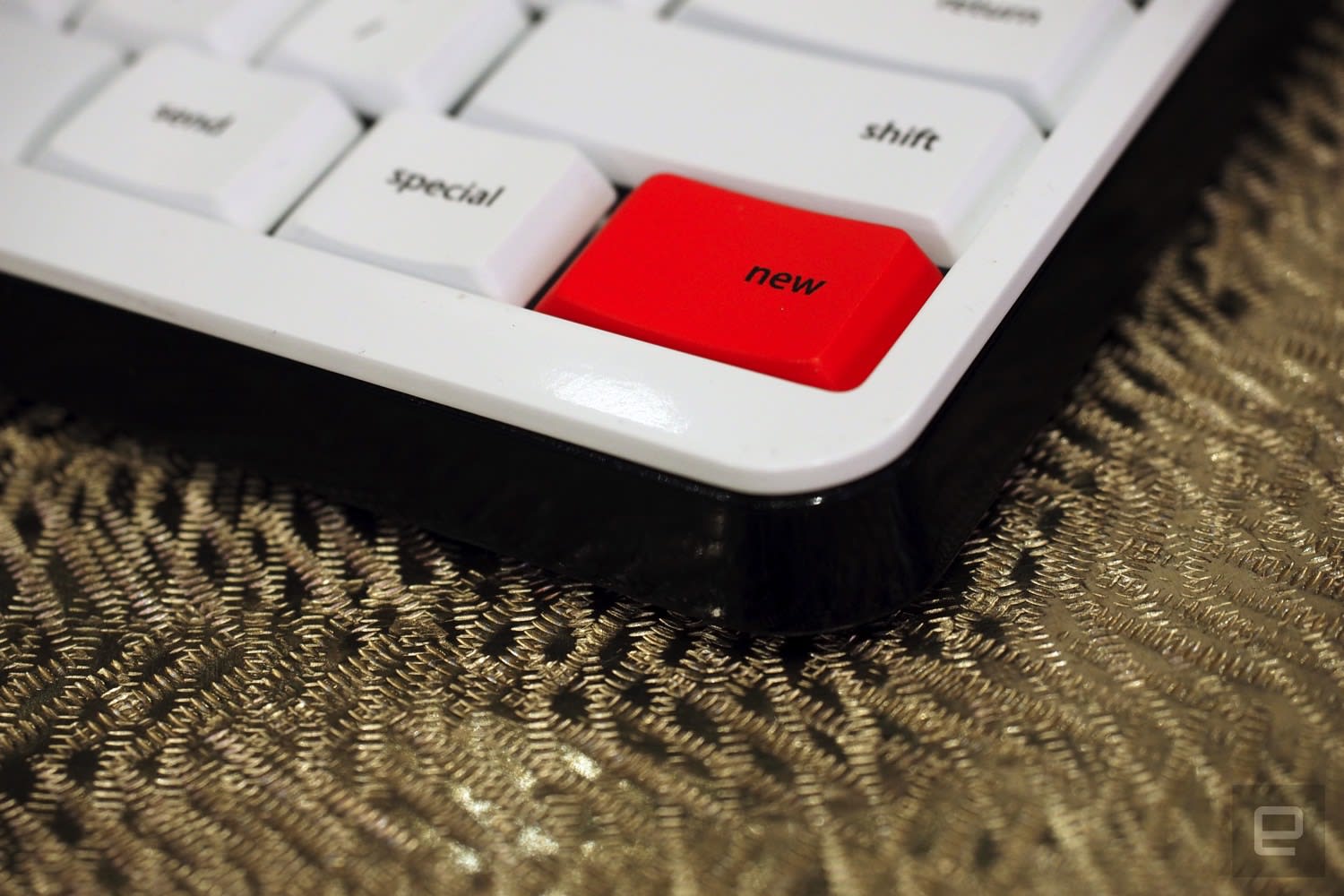 Fortunately there aren't many other sacrifices to be made. The giant switches that let you select file folders and toggle the WiFi on and off have been replaced with low-profile buttons, but the functionality is still there. And users can sync their files to a Postbox (Astrohaus' proprietary service), Dropbox, Google Drive or Evernote account. They can even sync files with an original Freewrite for those who own both and would like to switch between devices.

While the Traveler means more portability without any real downgrades, it also isn't a step up in specs or performance. The battery life still runs around four weeks, and the e-ink screen is the same size. Astrohaus co-founder Adam Leeb told me that a larger screen would have meant a bigger device or a switch to LCD. The latter would have hurt the battery life while also making Freewrite devotees who prefer e-ink for reading unhappy. (As a Kindle Paperwhite owner, I understand the preference.) 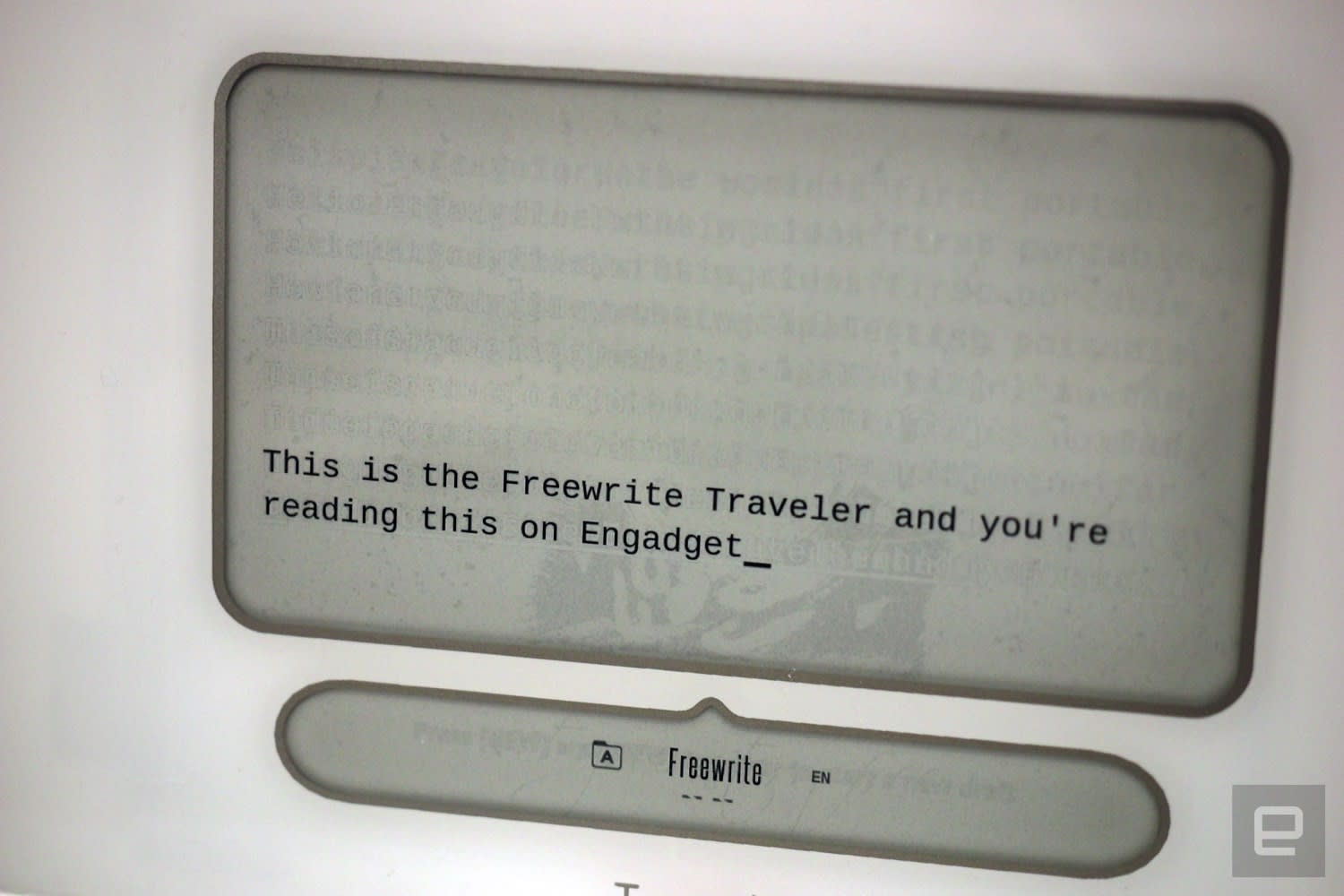 Unfortunately, e-ink is still a bit pokey. My fingers tapped out words far faster than the screen could display them. That meant I would make typos but not see them until I was already tapping away on the next sentence, forcing me to backspace a lot. It's a definite reminder of why we've moved on from typewriters.

While the original Freewrite used its design to prey heavily on people's nostalgia, the Traveler is more focused on pure functionality and portability. It's also a lot cheaper: While the Freewrite is a rather expensive toy at $499, the Traveler can be pre-ordered today for a more reasonable (though still pricey) $309. Sure, you could drop some cash on a copy of Scrivener instead, turn off the WiFi on your laptop and hope you get some work done. But when you inevitably cave and end up refreshing your Twitter feed for the 100th time, the Freewrite's spartan approach to writing might start looking pretty good.

All products recommended by Engadget are selected by our editorial team, independent of our parent company. Some of our stories include affiliate links. If you buy something through one of these links, we may earn an affiliate commission. All prices are correct at the time of publishing.
The Freewrite Traveler lets authors battle writer’s block outside
astrohaus
design
eink
freewrite
freewritetraveler
gear
hands-on
keyboard
personal computing
personalcomputing
typewriter
writing