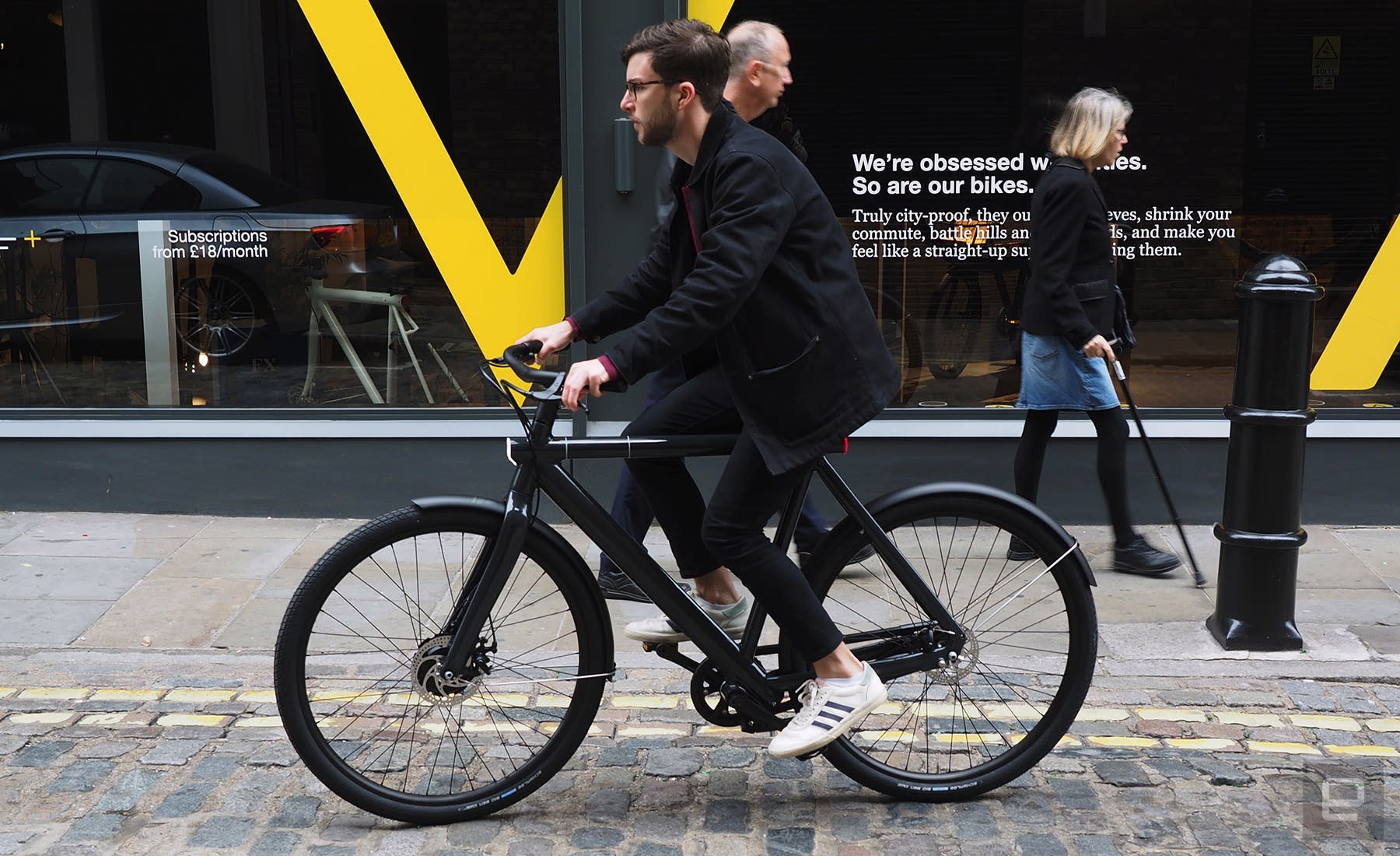 The rear-wheel 'stealth lock' is a stylish improvement over the original’s chain system.

VanMoof is almost ready to ship its next generation of electric bicycles. The Electrified S2 and X2 are vast improvements over their predecessors, with bigger batteries, nippier motors and smarter locking mechanisms. If you live in a city and fancy commuting on a bicycle, but fear conniving thieves and the potentially sweaty exercise required to reach the office, this could be your savior. During a two-hour test-ride in London, I was impressed with the S2's stylish frame, pedal-assisted power and integrated 'stealth lock.' It's not a cheap purchase, but few electric bicycles are at the moment.

Pedalling around Covent Garden, I was struck by the Electrified S2's speed. Both the S2 and X2 (aside from the shape of the frame, they're exactly the same) come with a new 250-500W motor built into the front-wheel hub. On the highest power level, the S2 was noticeably faster off the mark and kicked in more frequently as I coasted around the Seven Dials. The bike still tops out at 25 KMH in Europe and 32 KMH in the US -- these limits are set by local lawmakers -- but it requires less effort to reach these speeds. 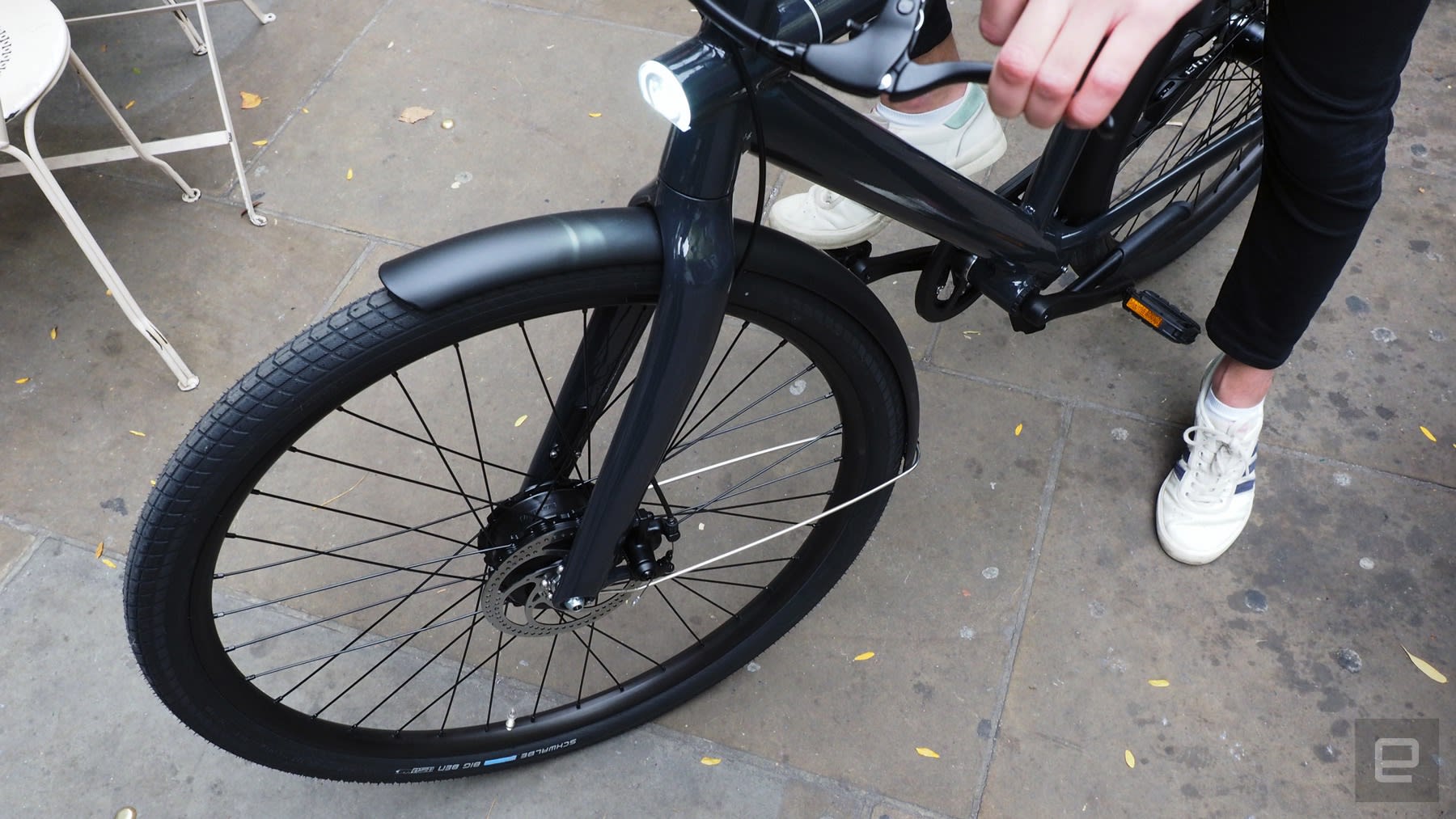 The S2 and X2 also benefit from a 504Wh battery. It's only marginally bigger than the 418Wh version that shipped with the previous models, however VanMoof says it can carry riders an extra 19 miles. That's dependent, of course, on the power level you've chosen and the number of hills you're hoping to tackle. The battery should take four hours to charge, too, which is a marked improvement over the Electrified S and X's six hours. Unfortunately, I couldn't test these claims in London -- an hour simply wasn't long enough -- but any advancements would be welcome.

The Electrified S2 is fantastic to look at. I rode the subtle Thunder Grey version, though a bolder Fog White option will also be available. VanMoof is a Dutch company, so of course the handlebars bend slightly toward you, promoting a more casual and upright style of riding. The battery is hidden inside the frame and there are integrated lights at the front and back. There's little here that makes the S2's electric capabilities -- and eye-watering price-tag -- obvious to the casual bystander. That's a good thing, in my opinion, because it accentuates the bike's stylish shape and discourages potential thieves from taking a closer look.

VanMoof has swapped the screen on the top tube for a 'Matrix Display,' comprised of 166 LEDs, which visualize your current speed and remaining charge while riding on the road. If you press and hold the button on the right side of the handlebars, it will also show and cycle through the four available power levels. It's a stylish system, though the LEDs can be hard to see in bright sunlight. I often caught myself cupping one hand around the display to better see what was happening. That's fine when you're standing still but potentially dangerous if you're riding through a busy street. 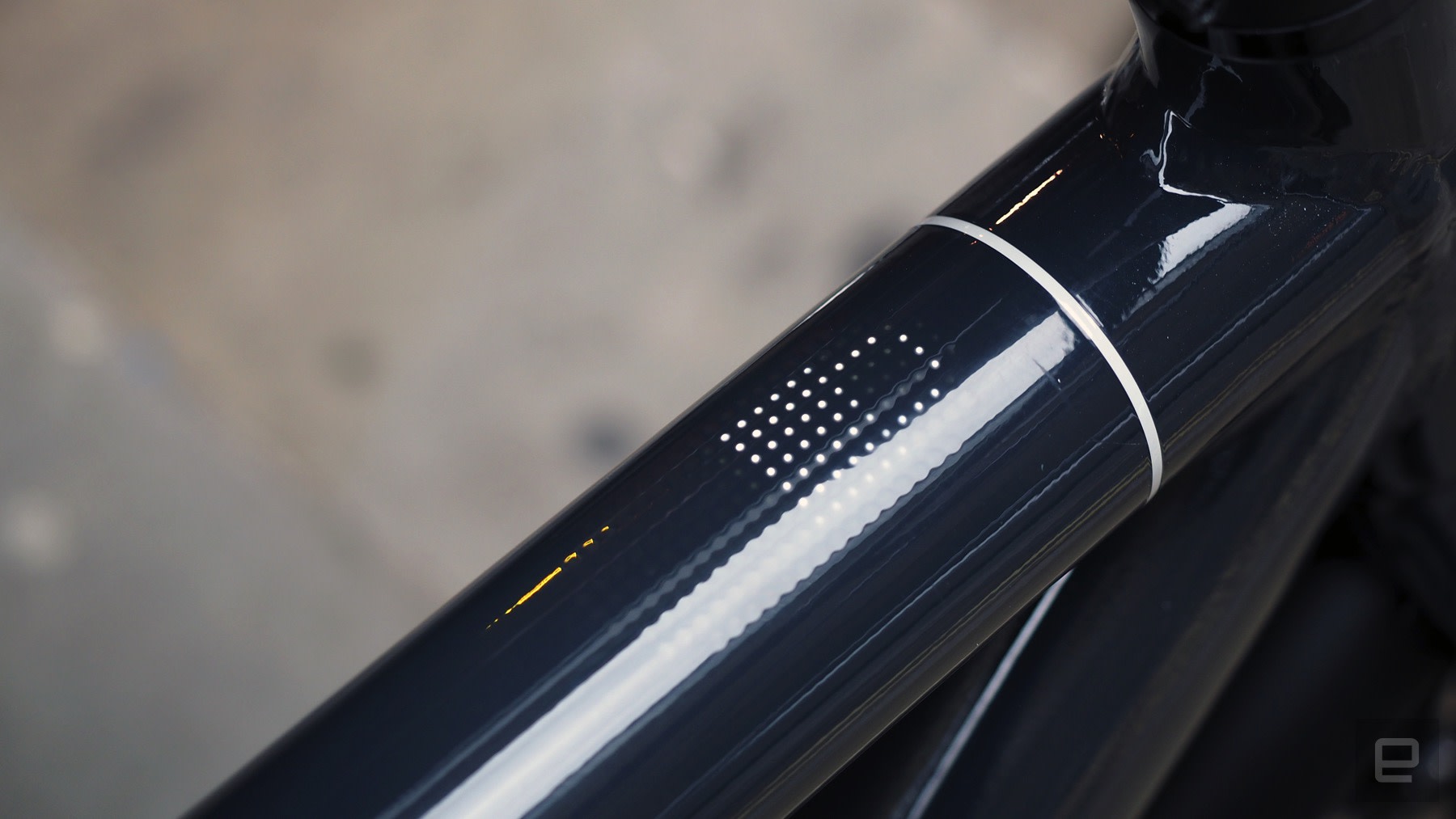 The biggest and arguably most important addition to the S2 and X2 is the rear-wheel 'stealth lock.' As the name implies, it's an elegant security feature that seamlessly blends into the bike's design. The original Electrified S and X, for comparison, used a bulky chain that had to be stored in a triangular pouch on the frame. The new solution is activated by lining up two little white lines -- one on the frame, the other on the hub -- and lightly kicking a small metal nub on the side of the bike. It sounds complicated but takes less than a few seconds to complete in practice.

The lock stops the bike from rolling more than half a meter forwards and backwards. If someone tries to take it, a short but loud alarm will fire from inside the frame. Continuous movement will trigger a louder and sustained sound, called 'phase two,' and eventually activate location-tracking through the bike's integrated GSM module. You can then notify the police or, if you have a Peace of Mind subscription, rely on VanMoof's Bike Hunter team to track it down for you. If they can't retrieve it within two weeks, you'll get a replacement that's of a similar or better age and condition.

The Electrified S2 can be unlocked in a few different ways. You can open the app, hit the padlock icon and roll the bike forward. Or tap a three-digit passcode with the left button on the handlebars. (To input 1-2-3, for instance, I had to tap once, wait for a beep, then tap twice, wait for another beep, and so on.) The third and final option uses Bluetooth to recognize when you and your paired smartphone are nearby. You can then walk up to the bike and tap the handlebar button once to disengage the stealth lock. 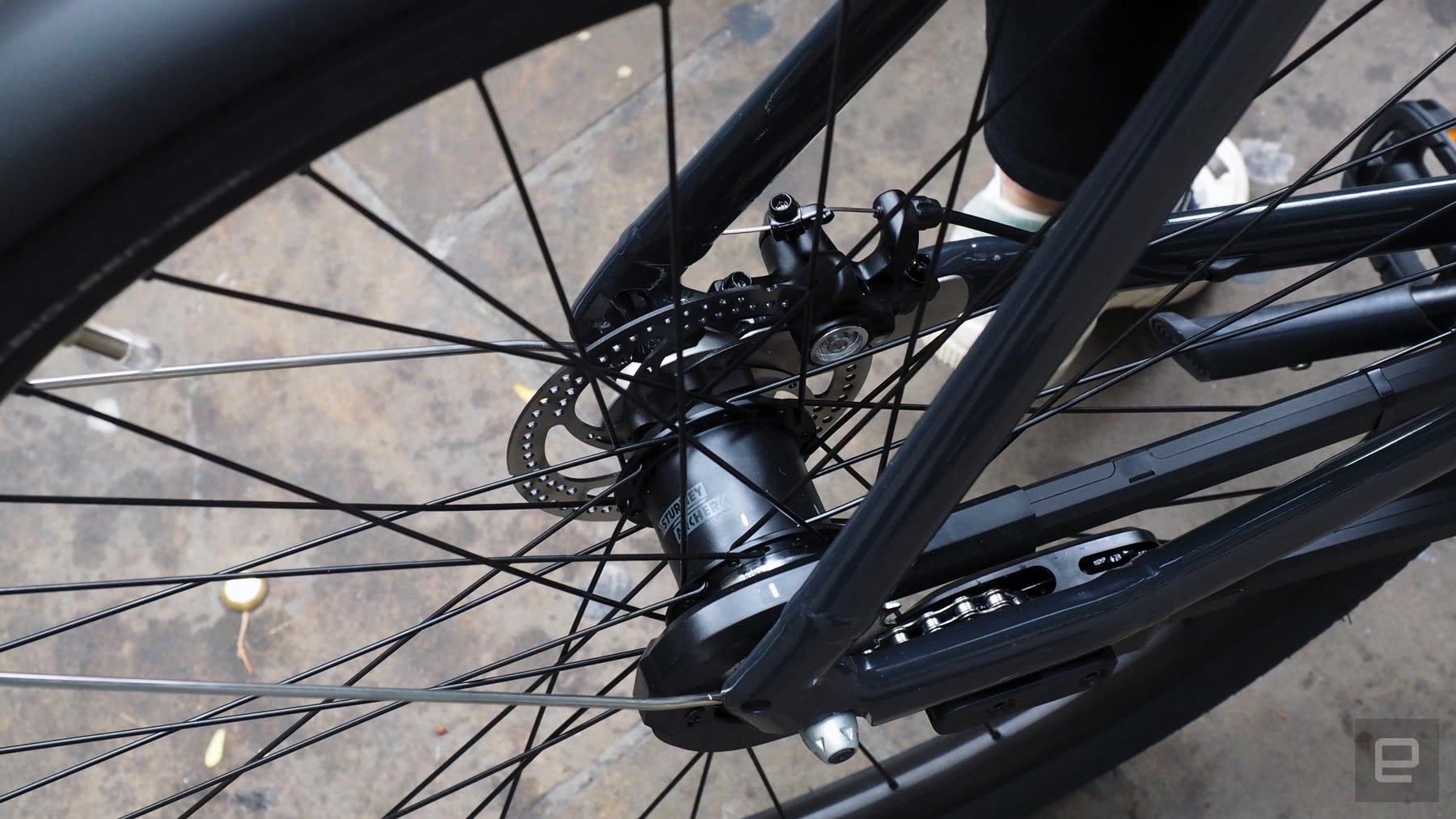 I found the Bluetooth solution to be a little unreliable, however. The three-digit passcode system was also a tad slow -- not unbearably so, but long enough that I considered taking my phone out and using the app-unlock method. Hopefully these problems can be fixed with a software update.

VanMoof is also promising a subscription option for cash-strapped riders next year.

You can, of course, ignore the smart lock altogether and use a traditional bike chain. If I owned the Electrified S2, I would probably carry one in my bag as a secondary form of protection. The hub lock, after all, doesn't stop someone from lifting the bike up and into a nearby truck. The alarm will sound, of course, and you'll be notified of its movement, but that's about it. Neither can replace the safety of a lock tied to a seemingly immovable lamp post. On the upside, the bike weighs 19KG -- 500 grams more than the original Electrified S and X -- which should make it trickier to pick up.

VanMoof's bikes are expensive. The Electrified S2 and X2 are coming to the US, Europe and Japan for $3,398/£3,198, though the company is offering an early-bird discount of $800/£800 at the moment. These prices, while steep, are roughly in line with other electric bikes offered by Brompton, Hummingbird and Coboc. VanMoof is also promising a subscription option for cash-strapped riders next year. The monthly fee is yet to be disclosed, but for reference the non-electric Smart X can be rented for $19/£18 per month with a one-time $98/£98 charge. A similar, or fractionally higher price could be a tempting alternative to monthly rail and bus passes.

/14
All products recommended by Engadget are selected by our editorial team, independent of our parent company. Some of our stories include affiliate links. If you buy something through one of these links, we may earn an affiliate commission. All prices are correct at the time of publishing.