It can empty itself and map your home -- but it’ll cost you.

Adulting is hard. But over the past 12 years, iRobot's Roomba made it just a bit easier for me by keeping my floors clean, no matter how lazy I felt. But while the company has steadily improved its robot vacuums over the years -- by making them more powerful, adding sturdy rubber rollers and integrating room mapping -- they're still very similar to the first model that debuted in 2002. That's why the $949 Roomba i7+ is such a huge deal: It can not only vacuum your floors better than before but also empty its dust bin into a Clean Base. It's the epitome of lazy cleaning technology: something that can do its dirty work without making you leave your couch.

Setting up the i7+ is a bit different than with past Roombas: You have to make some room by a wall or sturdy surface for the Clean Base. Past models relied on a flimsy plastic charger that could be placed almost anywhere. But the i7+'s base is 19 inches high and 15 inches deep, so it's tougher to find a suitable spot. (I placed it in front of my Blu-ray shelf.) Once that's ready, you just have to put the Roomba on the base and wait a few hours for it to charge. During that time, I connected it to the iRobot mobile app, which let me keep an eye on the growing battery level. 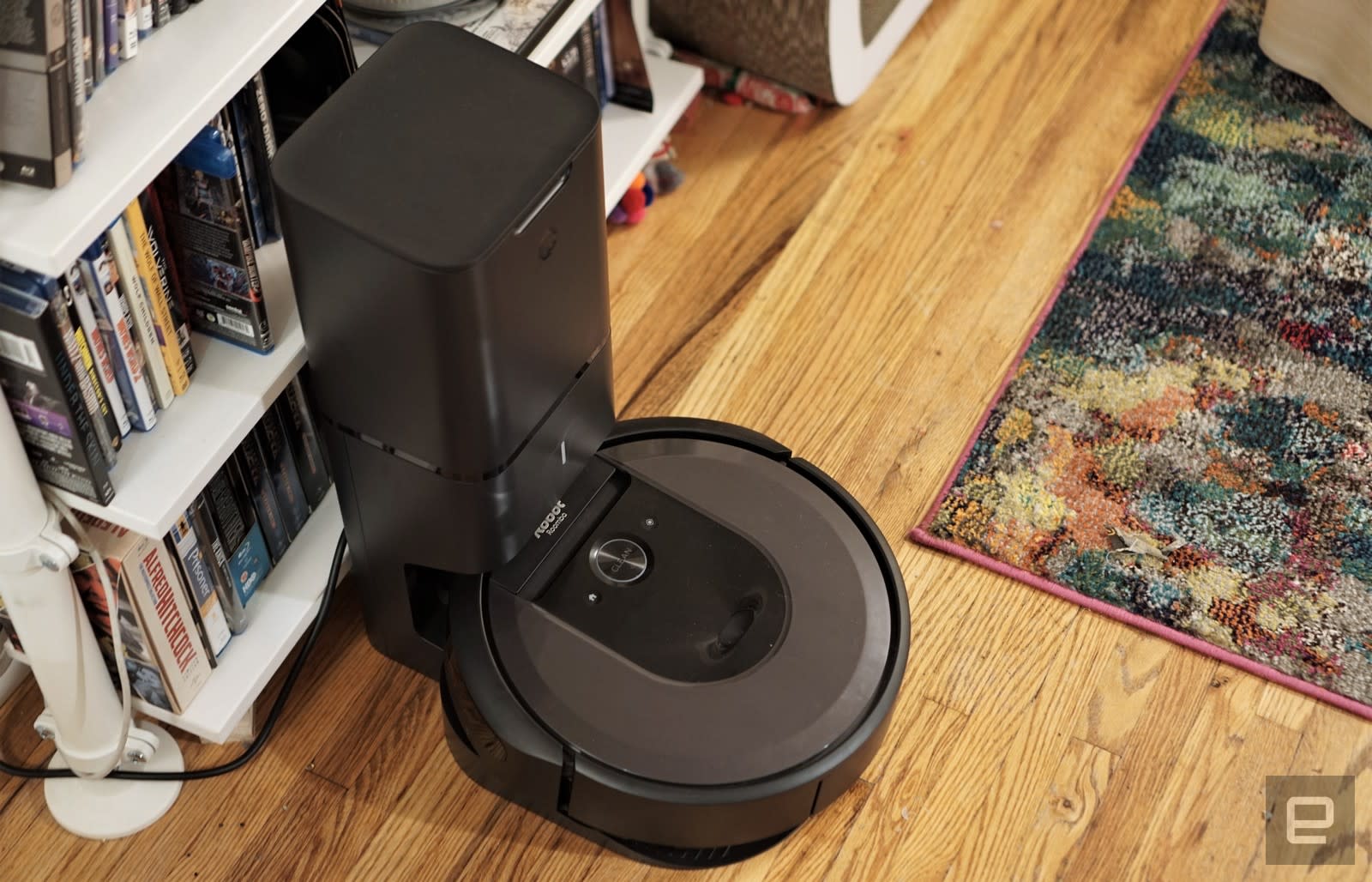 Starting a cleaning job is the same as always: Hit the huge Clean button on the Roomba, use the mobile app or tell Amazon's Alexa or Google Assistant to get things going. With my goal of peak laziness in sight, I shouted, "Alexa, ask Roomba to start cleaning," and it slowly backed out of the charging base, whirred its motor up and immediately set to work. It still relies on two rubber dirt extractors and a small sweeping side brush to clean walls and corners. The company also made a small change that has enormous benefits: It moved the vacuum motor out of the dirt bin and into the middle of the i7+ to cut down noise.

Almost instantly, I noticed how much quieter it is than the Roomba 980. At first, I wondered if the i7+ was actually sucking anything up at all. It sounds like a low hum, while its predecessor emitted an annoying high-pitched whine as it cleaned (and it got even louder when it reached carpets). While it doesn't help the i7+ clean better, the quieter experience is a huge quality-of-life improvement. Now I can enjoy TV shows at a normal volume while the Roomba does its job. (I'm sure it's learning to resent my sloth as it works tirelessly.) 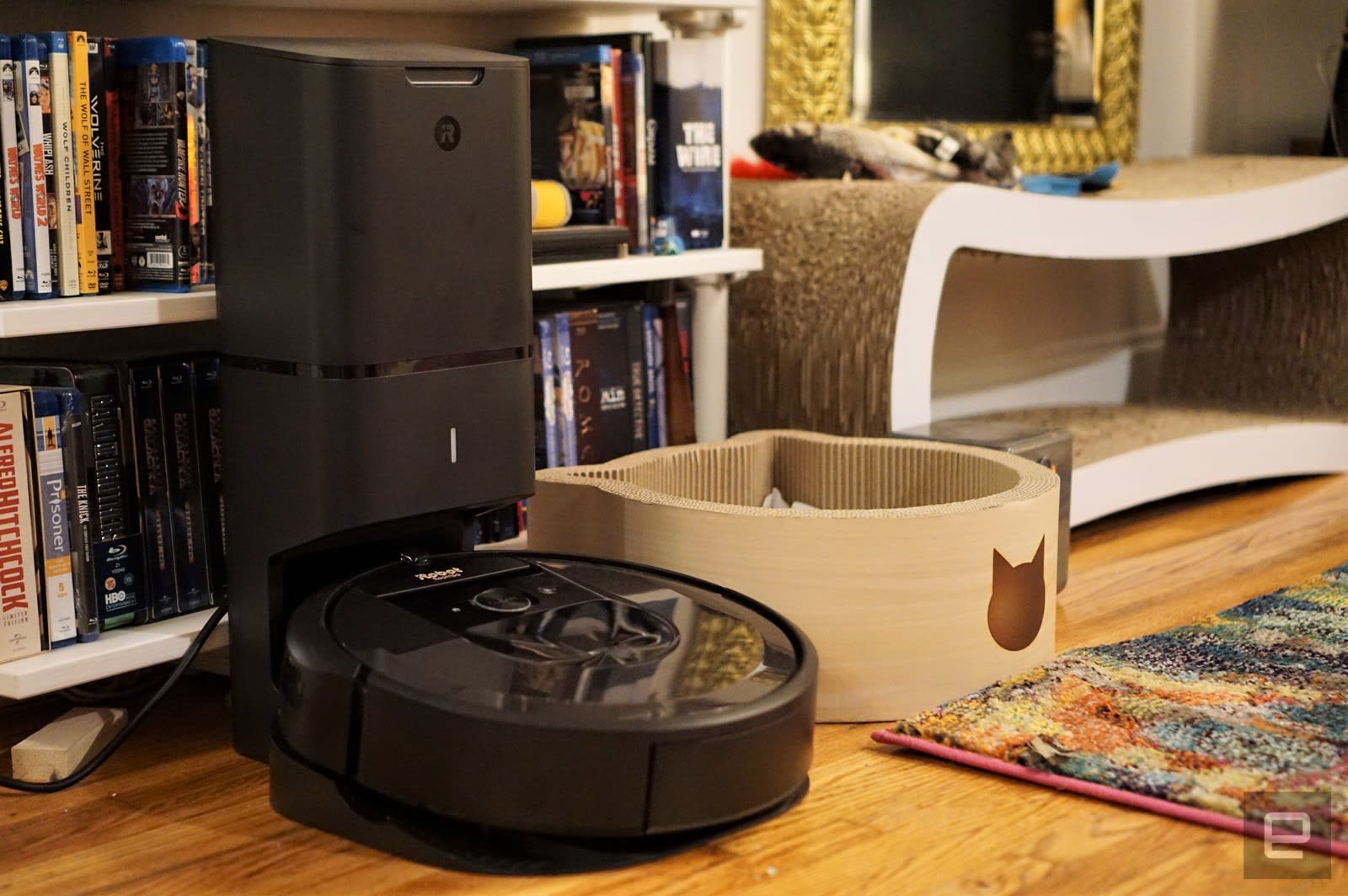 From what I could tell based on the amount of dirt in the bin, the i7+ cleaned up my floors and carpets just as well as the 980. iRobot says it has twice the suction power of the Roomba 960, but it lacks the loud Power Boost feature from the 980. That's not a huge loss, though, especially since the i7+ is something I don't mind running more often.

Its navigation and mapping technology hasn't changed, but it still does a solid job of avoiding obstacles and navigating along floors and walls. After one cleaning job, the i7+ had a basic sketch of my apartment's layout (which you can view on the iRobot app), but it took four rounds of work before it had a completed map (see below). Once it has the lay of the land, you can also label rooms, which lets you command Roomba (either through Alexa or the app) to clean a specific area. It took the Roomba i7+ 65 minutes to complete a full pass of my two-bedroom apartment. That might sound like a lengthy run, but it's the same amount of time that it took the 980. I'd much rather have a robot vacuum that did a thorough job of cleaning as much cat hair as possible, no matter how long it took, than try to race through my home.

The i7+ always managed to find its way back to its Clean Base when it was done, but for some reason it forgot to vacuum out the dirt bin after the first job. That's not a huge deal, since you can do that by hitting a button on the mobile app, but it was still annoying. Automated self-cleaning is the entire selling point of this machine, after all. I'll chalk that up as a first-run error, since the i7+ faithfully emptied itself after every future cleaning job. 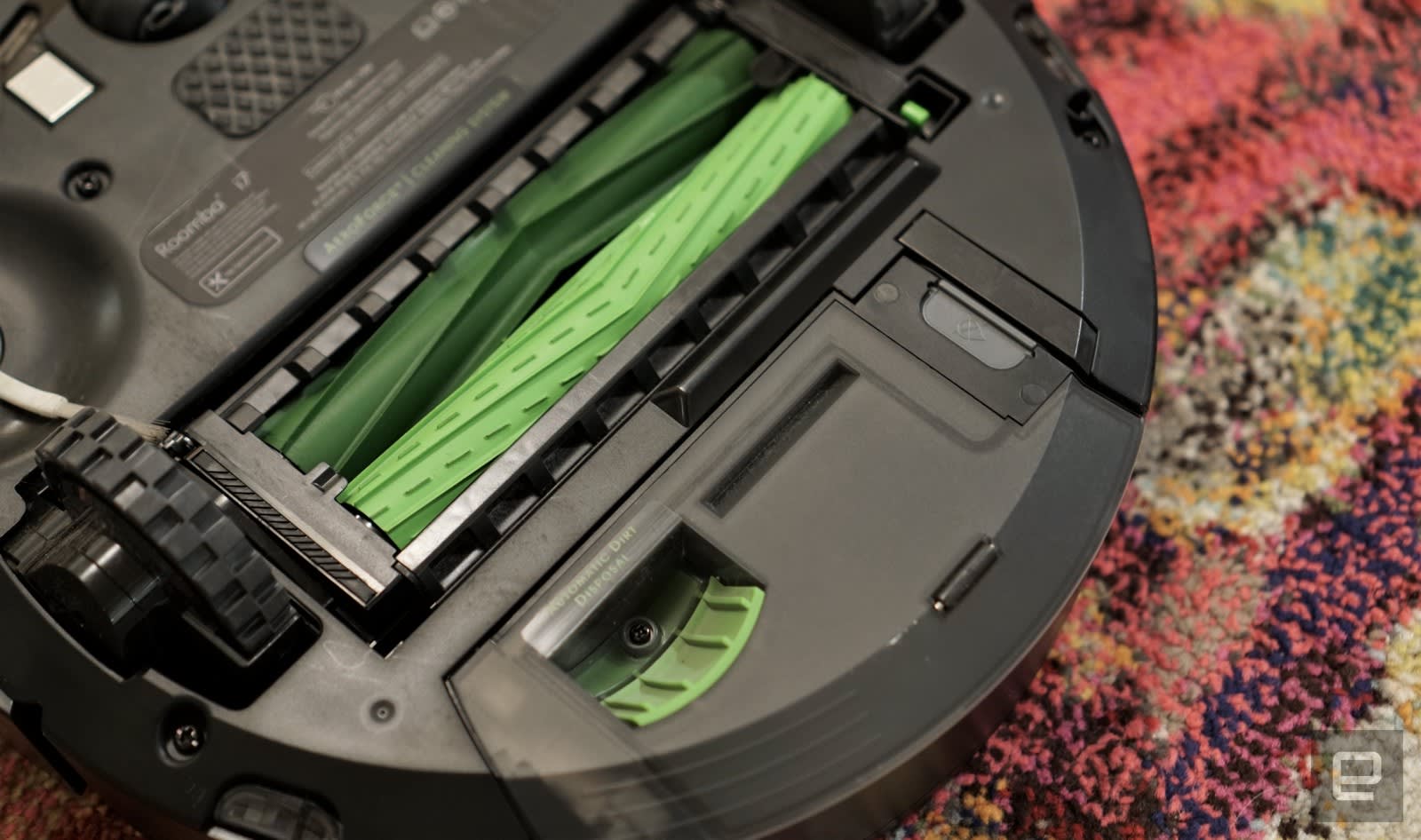 So how, exactly, does the i7+ clear its own bin? It's all about the Clean Base: iRobot placed a vacuum intake at the bottom, which connects to an opening underneath the Roomba's dust tray. You also have the option of manually opening the bin, just in case you're worried a piece of jewelry was sucked up. iRobot claims the Base's proprietary bag can hold up to 30 bins worth of dirt. Once it's full, you just have to open the top of the base and throw the bag in the trash. While it's a shame that such an expensive vacuum requires a constant outlay of cash for new bags (they're $15 for a pack of three), at least you won't have to change them often.

I've lived with the Roomba i7+ for a few weeks now, and in that time I've used it far more frequently than other robot vacuums. That alone is telling. The combination of quiet performance, smart navigation and automatic bin cleaning reduces most of the friction I've experienced with other models. I didn't even worry as much about toys and cables on the floor -- the i7+ is smart enough to untangle itself by running its rollers backward. Previous models needed constant babysitting, but this only got stuck once, underneath my dining table. 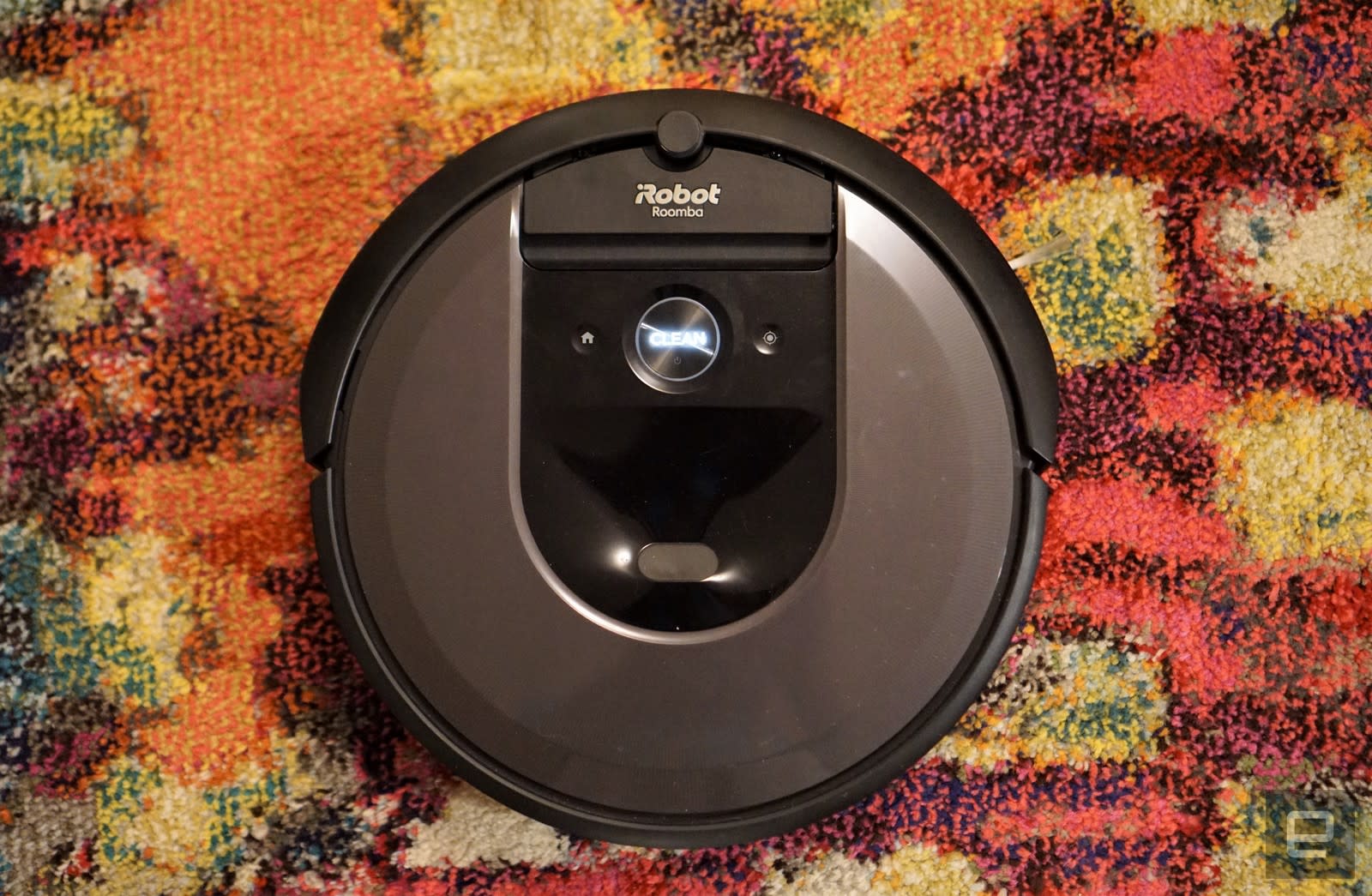 The only major problem, as with every high-end Roomba, is the price. The i7+ sells for $949 -- $50 more than the 980's launch price three years ago. But at least you're getting more for your money with this model: The i7+ includes the new robot as well as the vacuum charging case. You can also pick up the Roomba on its own (as the i7) for $699 and add the Clean Base later for another $299. If you're not ready for such a huge investment, the cheaper models are still compelling: The 960 goes for around $550 while the e5 is $450. Now that there's an even pricier Roomba around, those could drop further. There's also the 600 Series, which starts at $300.

Neato vacuums are another option, but in my experience they get tangled more often and don't clean as well. I haven't tried the Eufy RoboVac 11S, which is Wirecutter's current recommendation, but at $230 it's a worthy option if you're looking for a good deal.

No matter how you look at it, the i7+ is a luxury. For those who can afford it, it's the realization of everything iRobot has been working toward for the past 16 years. It'll be awhile before we see the humanoid robot helpers science fiction promised us. But for now there's finally something that can keep your floors clean without getting your hands dirty.