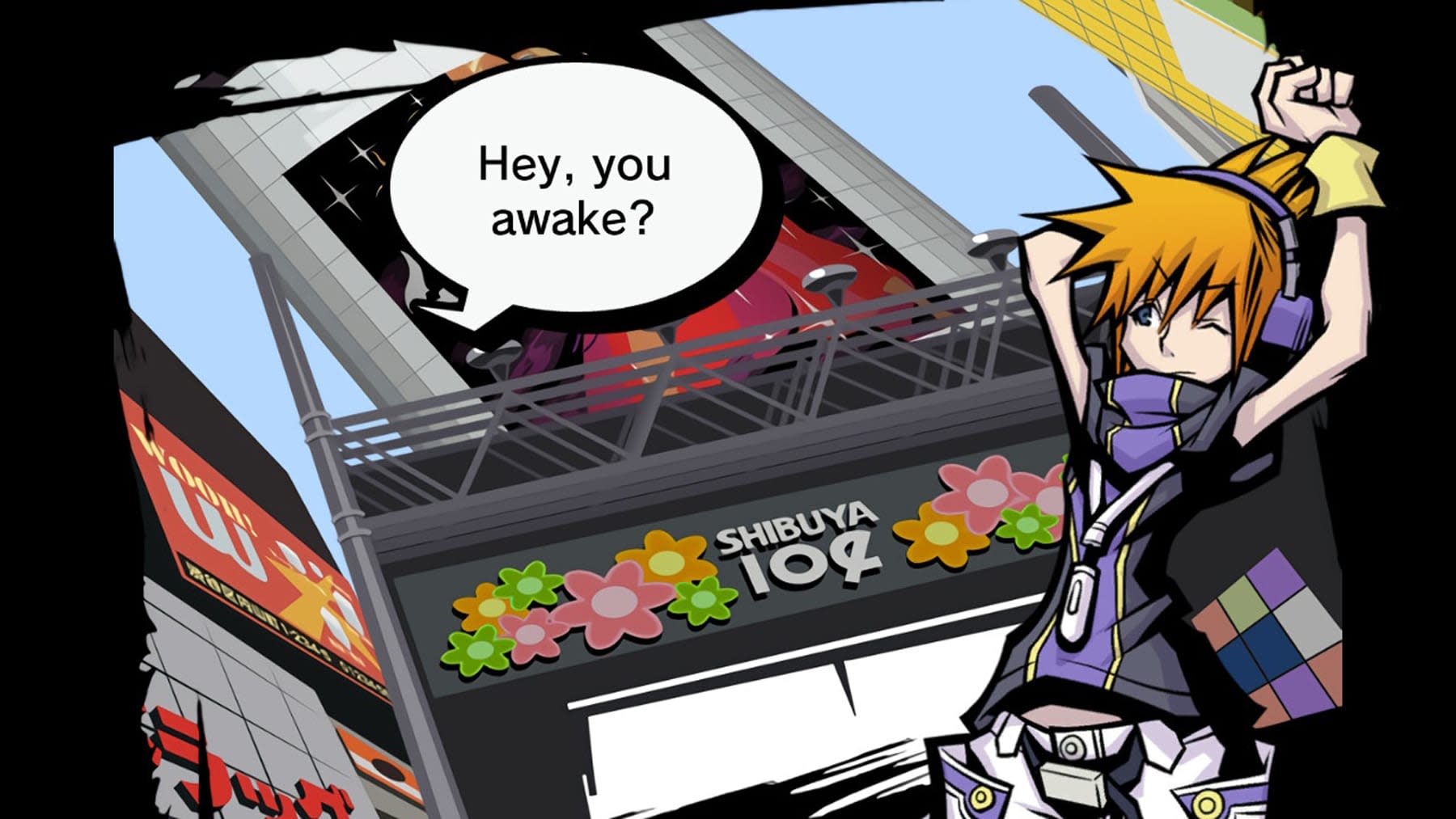 'The World Ends with You' shines on Nintendo Switch

The 11-year-old JRPG still holds up.

The World Ends with You is one of my favorite Japanese role-playing games. It was released for the Nintendo DS in 2007, when I was a moody teenager trying to make it through college. I loved the graffiti-inspired art style, eclectic soundtrack and unique touch-and-button-based combat. Most of all, though, I was enamored by the game's depiction of Tokyo. While many JRPGs take place in a fantastical land, The World Ends with You is set in modern Shibuya. Sprinting across the 'scramble' crossing and diving into ramen bars was a welcome escape from my daily bus rides.

I haven't played the cult classic or its mobile ports since. The new Switch version, which comes out today, tempted me however with its remixed soundtrack and bonus story chapter. With some apprehension I booted the game up earlier this week and discovered that, after 11 long years, it still holds up wonderfully. If you have any love for Tokyo and Japanese street culture, this is a near-essential title for Nintendo's hybrid console.

The World Ends with You focuses on a group of teenagers who have been swept up in a deadly Reapers' Game against their will. The only known way to escape is by deciphering and completing cryptic challenges sent to their smartphones each day. If they fail, or lose to ferocious monsters known as Noise, they'll be wiped out of existence forever. Scary stuff.

The 'death game' concept has been explored in movies, books and TV shows before. The World Ends with You has a unique take, though, that I found just as enjoyable second time through. The competitors, for instance, can use psychic powers tied to pin badges. They can't speak to anyone who isn't participating in the 'game' but they can manipulate their behavior by implanting thoughts and moving pieces on a ouija board-style game called Reaper Creeper. The only exception is Shibuya's businesses -- for some reason players can still walk in and buy clothes and food no problem.

Confused yet? In the beginning the teenagers are too. Thankfully, The World Ends with You takes its time explaining the design and sinister forces behind the Reapers' Game. The lore is complex but logical and gratifying to slowly piece together. Some of the plot twists are predictable and overly sign-posted, but others -- especially in the final third of the game -- will catch you completely off guard.

There are plenty of iconic landmarks to discover.

The competitors can be difficult to root for, however. I had forgotten how sulky and generally detestable Neku Sakuraba, the main character, is at the start of the game. Eleven years ago, I probably thought he was a super-cool loner type like Final Fantasy VII's Cloud Strife. In truth, he's a jerk that constantly criticizes his combat partner, Shiki, with snide thoughts like: "Ugh, stop laughing", "Quit worrying about everybody else" and "Okay, Captain Sappy. Roger that."

It's a slow and rewarding character arc that plays into the wider message of the game.

Thankfully, Neku realizes that he needs a partner, and deeper understanding of Shibuya's residents, to survive the Reapers' Game. It's a slow and rewarding character arc that plays into the wider message of The World Ends with You: that every person lives in a bubble, or 'world', limited by their experiences in life. If you stay open-minded and talk to different people, this 'world' will expand and make you a better, more well-rounded person. It's a heady concept, especially for a JRPG, but one that the game handles with a surprising amount of tact.

The World Ends with You has a beautifully stylized 2D art style. The characters were designed by Tetsuya Nomura, a legendary artist and video game director who has worked on multiple Final Fantasy and Kingdom Hearts games. They all have colorful outfits, weirdly narrow waists and thick, graffiti-inspired outlines. These make them distinctive and easily recognizable against the streets of Shibuya, which are portrayed in an equally grungy, manga-meets-tribal art aesthetic. It's not the most detailed rendition of Tokyo -- the game was originally designed for DS hardware, after all -- but it captures the atmosphere and major landmarks perfectly. 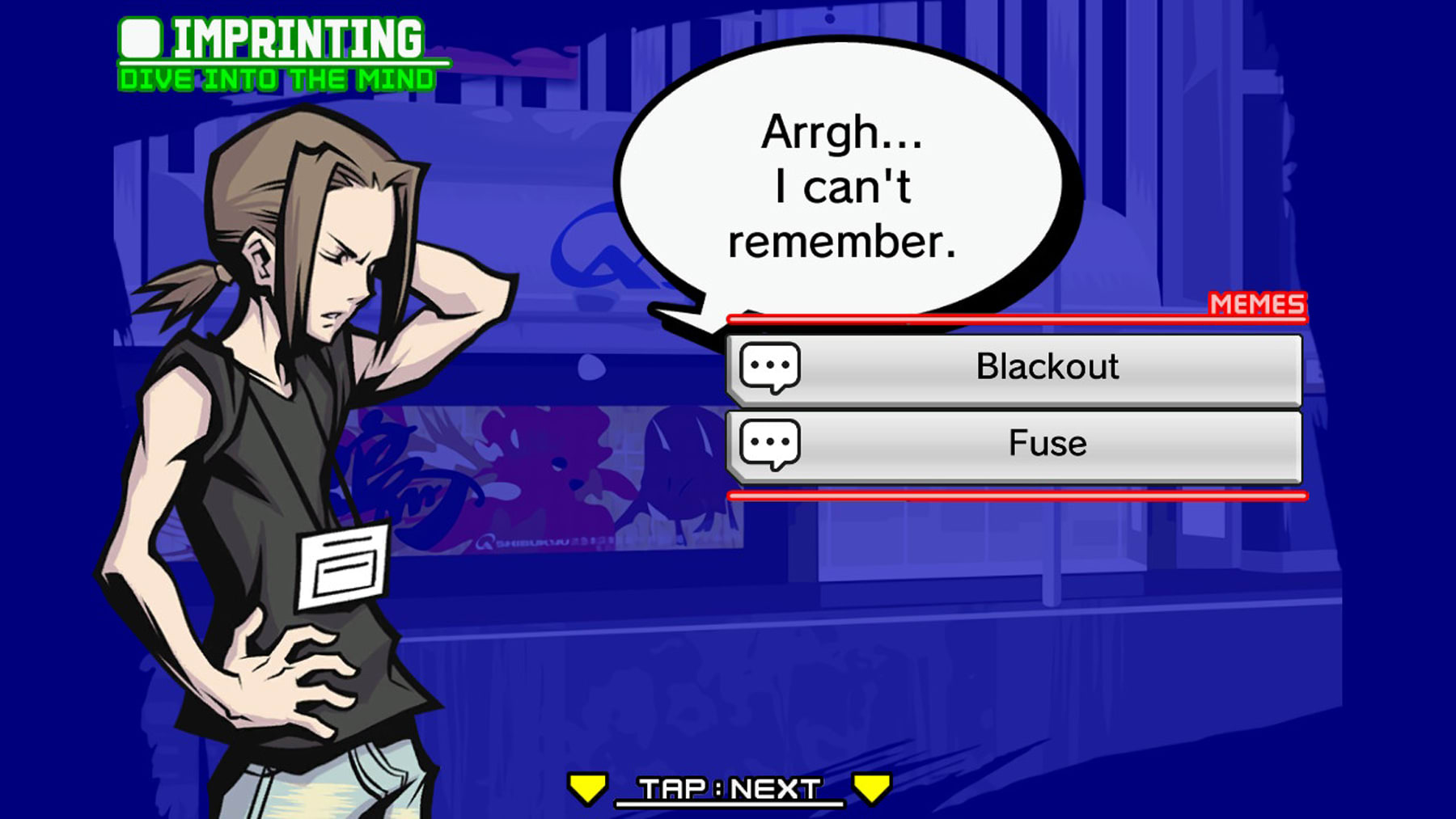 You can walk past the Hachiko statue, for instance, or up 'Spanish Hill' (Supeinzaka). There's also a bevy of stores with obvious real-life counterparts, including Towa Records (Tower Records), 104 (109) and AMX (HMV). Every type of fashion is represented in the game, including gothic, punk and vintage. Clothing can be equipped for stat bonuses that are affected by the area you're fighting in. At the Scramble Crossing, for instance, you can wear Tigre Punks for double damage and Natural Puppy for a 20 percent attack boost. Don a brand for long enough and it will also become more fashionable in that district.

Food, too, can be slowly consumed for permanent stat boosts. These systems encourage you to revisit stores, spend money and slowly build a rapport with their employees. Other video game franchises, including Persona and Yakuza, have recreated Tokyo with a similar focus on high-street commerce. The Worlds Ends with You is still worth checking out, though, if you've ever dreamt of living in the Japanese capital.

The game's diverse and youth-centric vibe is reinforced by its stellar soundtrack, which spans rock, hip hop and electronica. The remixed tracks are excellent but I prefer most of the original versions -- thankfully there's an option to switch between them in the menu.

The biggest difference between the Switch and DS versions is, unsurprisingly, the combat. The original game was unique because it split your attention between the two screens. You controlled Neku with the stylus while button-mashing combos with either the D-Pad or ABXY buttons (depending on whether you were right or left-handed) for his partner up top. On the Switch, your partner is reduced to a pin, or extra 'psych' power that you can utilize in battle. It's still possible to synchronize their attacks and enter 'Fusion' for massive damage, but the systems are greatly simplified.

If we never get a true sequel, this is a worthy send-off for Neku and friends.

You can battle the noise with your finger or a single Joy-Con. The latter uses motion controls to guide an on-screen cursor -- it works okay but I often found myself pressing Y or the left directional button to recenter the cursor. That's fine when you're grinding for experience but potentially catastrophic in the middle of a tense boss battle. The mode does, however, allow a friend to pick up the other Joy-Con and help you out in battle. I wasn't able to try this feature, however, because it only supports local multiplayer and I'm not dextrous enough to wave both Joy-Cons like a dual-wielding ninja.

If you love JRPGs and have never played The World Ends with You, I highly recommend the new Switch version. The story is compelling and running around modern Tokyo is a joy. The updated soundtrack and extra story chapter, meanwhile, are enough to pull in people like me who haven't played the game since 2007. The combat has suffered in the move from DS to Switch hardware, but it's still a blast to launch uppercuts and ice pillars with your finger. If we never get a true sequel, this is a worthy send-off for Neku and his street-savvy friends.

Synchronized psychs will eventually unlock a Fusion attack.
Many of the missions revolve around troubled citizens.
Shibuya is filled with colorful street art.
Clothes will boost your stats and unlock special abilities.
Neku starts out as an introverted jerk.
All products recommended by Engadget are selected by our editorial team, independent of our parent company. Some of our stories include affiliate links. If you buy something through one of these links, we may earn an affiliate commission. All prices are correct at the time of publishing.
View All Comments
'The World Ends with You' shines on Nintendo Switch