Like so many Harry Potter fans, I've dreamed of attending Hogwarts and learning magic with a wand, cauldron and bulging bag full of quills, ink and parchment. In the absence of real witchcraft and wizardry, I've visited movie sets and played countless video games of varying quality. While fun, none of these experiences capture the thrill of actually understanding and performing magic. There's a thrill, of course, to summoning a Patronus with a DualShock 4 controller. These spells rarely feels earned, however, because they don't require much practice or knowledge to pull off in-game.

That's why I was intrigued by the Harry Potter coding kit developed by Kano. The app forces you to construct each spell with logic-based pieces before waving a plastic wand in the air. It's not the same, of course, as the classes depicted in J.K. Rowling's award-winning books. But the process provides a similar sense of learning and satisfaction when you can finally wave your hand through the air and explode a box of chocolate frogs.

Kano's companion app works with Windows, Mac, iOS and Android devices. You use this to create a cartoon-ish avatar and explore a map-like overworld. I know what you're thinking, and no, it's not the Marauder's Map. Kano's version lacks the detail of the iconic Harry Potter parchment, such as the moving character footprints and magically complicated paper folds. While a tad disappointing, the map uses a clean and consistent art style to depict memorable buildings such as Weasleys' Wizard Wheezes, The Great Hall and the Forbidden Forest. Everything is also labeled in case you don't recognize Flourish and Blotts or The Daily Prophet's offices.

The plastic wand connects to your PC, laptop or tablet over Bluetooth. It contains a gyroscope, accelerometer and magnetometer that track its movement in 3D space. The 'tip' of the wand appears as a cursor inside the app -- a little like pointing an old Wiimote or Switch Joy-Con at your TV.

To perform a spell, though, you have to code it first. Kano's magic is broken down into lessons, or tasks, that are highlighted on the map as small orange circles. You can click on them manually or hit the 'next challenge' button in the top right-hand corner to teleport to the appropriate destination immediately. The challenges themselves revolve around a puzzle piece library, workspace and live preview pane. Drag blocks onto the canvas and the preview pane will update immediately, summoning, moving and transforming magical objects, or causing them to react differently to the movement of your wand tip.

Different spells require different block combinations. To levitate a pint of Butterbeer, for instance, you'll need a block that applies force to the glass once the wand has been waved correctly. Once that's in place, you'll want a piece that explains it should fly in a particular direction. Finally, you'll need two boxes that specify the low-alcohol beverage should head towards the X and Y position of the wand tip on screen. The wand connects to your PC or tablet over Bluetooth

Kano's app will highlight the correct pieces and where to place them on your workspace. There's also a series of text prompts that briefly explain the purpose of each block and its impact on everything else you've assembled so far. The idea, of course, is to subtly teach you the basics of programming while recreating some of the most iconic spells and moments from the books. Some utilize Quidditch broomsticks, while others revolve around owls, spiders and potion cauldrons. The art is quite simplistic but it's always obvious what the company is trying to depict in each task.

Once you've finished the code, you're free to activate the spell. Some can be triggered just by moving the wand or performing a quick upward or downward flick. Others require a specific gesture that you perform while holding the button on the wand. And yes, that includes the famous swish-and-flick that Harry, Ron and Hermione use for Wingardium Leviosa.

Kano's kit has been rubber-stamped by J.K. Rowling and whoever else manages the Harry Potter brand. I wish the company had licensed more from the mostly superb Warner Bros. movies, however. The music, for instance, is slightly different from the tracks and motifs composed by John Williams, Patrick Doyle, Nicholas Hooper and Alexandre Desplat. You never see any of the classic characters, or hear the actors who gave them so much life on the big screen. It feels like a missed opportunity after the sizeable voice cast that was assembled for Harry Potter: Hogwarts Mystery.

The kit doesn't have an obvious story, either. It would have been nice to play through the events of the first movie, or an entirely original storyline that knits the various challenges together. The puzzles could have been packed up as the opening term for a Hogwarts transfer student, for example, or some kind of revision before the all-important OWL exams. 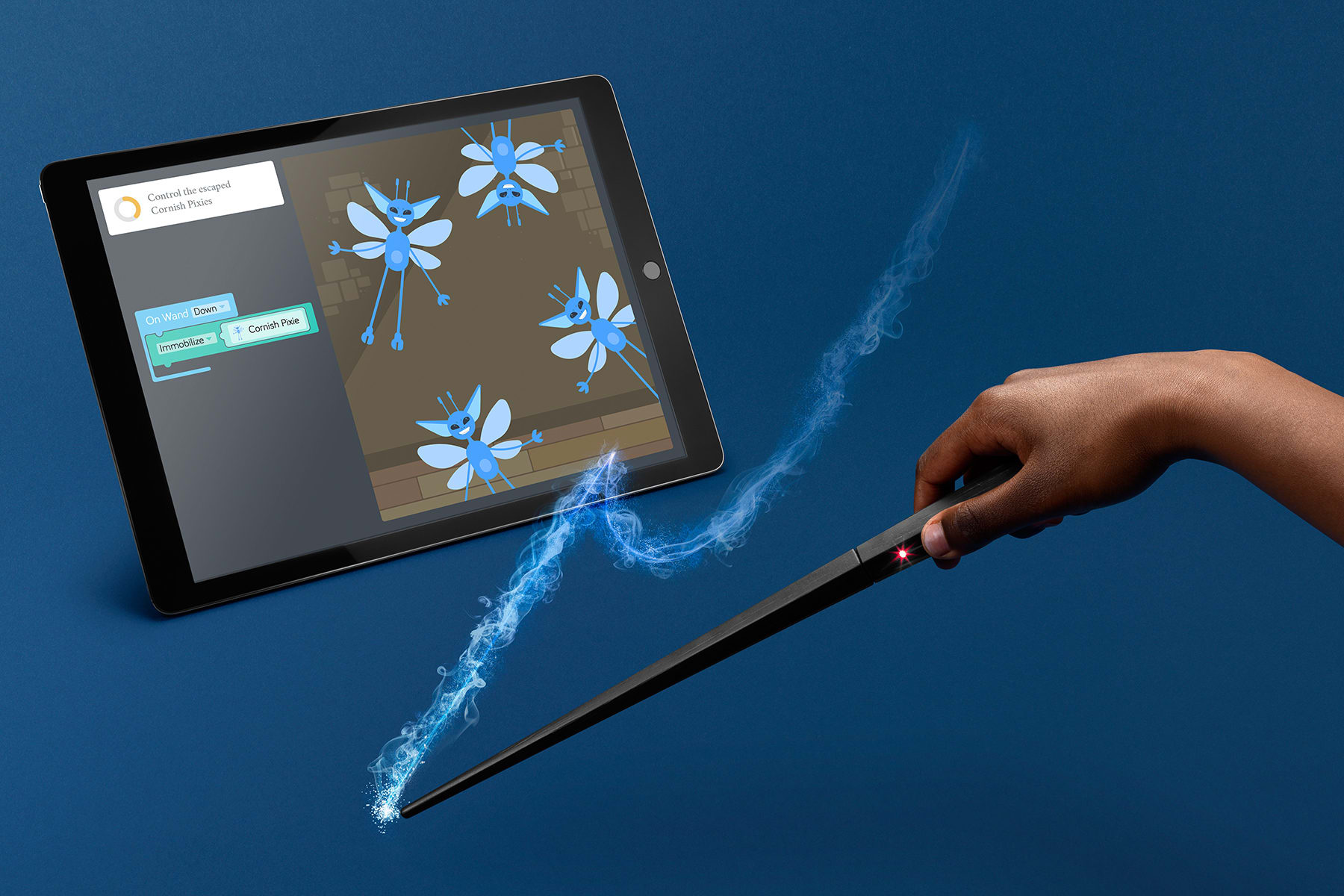 The saving grace is a game-like leveling and experience system that slowly unlocks new gear for your avatar. It's a simple premise but I was instantly hooked and wanted to collect all of my favorite pieces from the Harry Potter universe (I eventually settled on the classic 'H' sweater knitted by Molly Weasley, a time-turner necklace and the all-powerful Elder Wand.)

Running through the tasks, it's easy to fall half-asleep and grab whatever block the app has highlighted. To truly learn the fundamentals of programming, however, you need to read each text prompt and, ideally, experiment at the end of each challenge to understand the limits and capabilities of each block. If you don't, there's a good chance you'll struggle when the app produces a no-guidance puzzle. These are sprinkled throughout the 'campaign' and challenge you to complete a specific task with a small selection of logic-based pieces. Some are required for the solution, while others are optional or utterly irrelevant.

It captures the feeling of learning something that most mortals can't comprehend.

Completing the puzzles is hugely gratifying. They also encourage a slower, more methodical approach with the other tasks -- at one point I started taking notes to make sure I understood the cause and effect of a particularly complicated block.

This is where the feeling of tuition and development really starts to kick in. There's a genuine skill, or rather intelligence, that's required to perform magic with Kano's wand. Coding, of course, isn't part of the Harry Potter universe but it captures the feeling of learning something that most mortals can't comprehend. Because -- and apologies for what might be the cheesiest sentence I've ever written -- programming really does feel like magic sometimes. 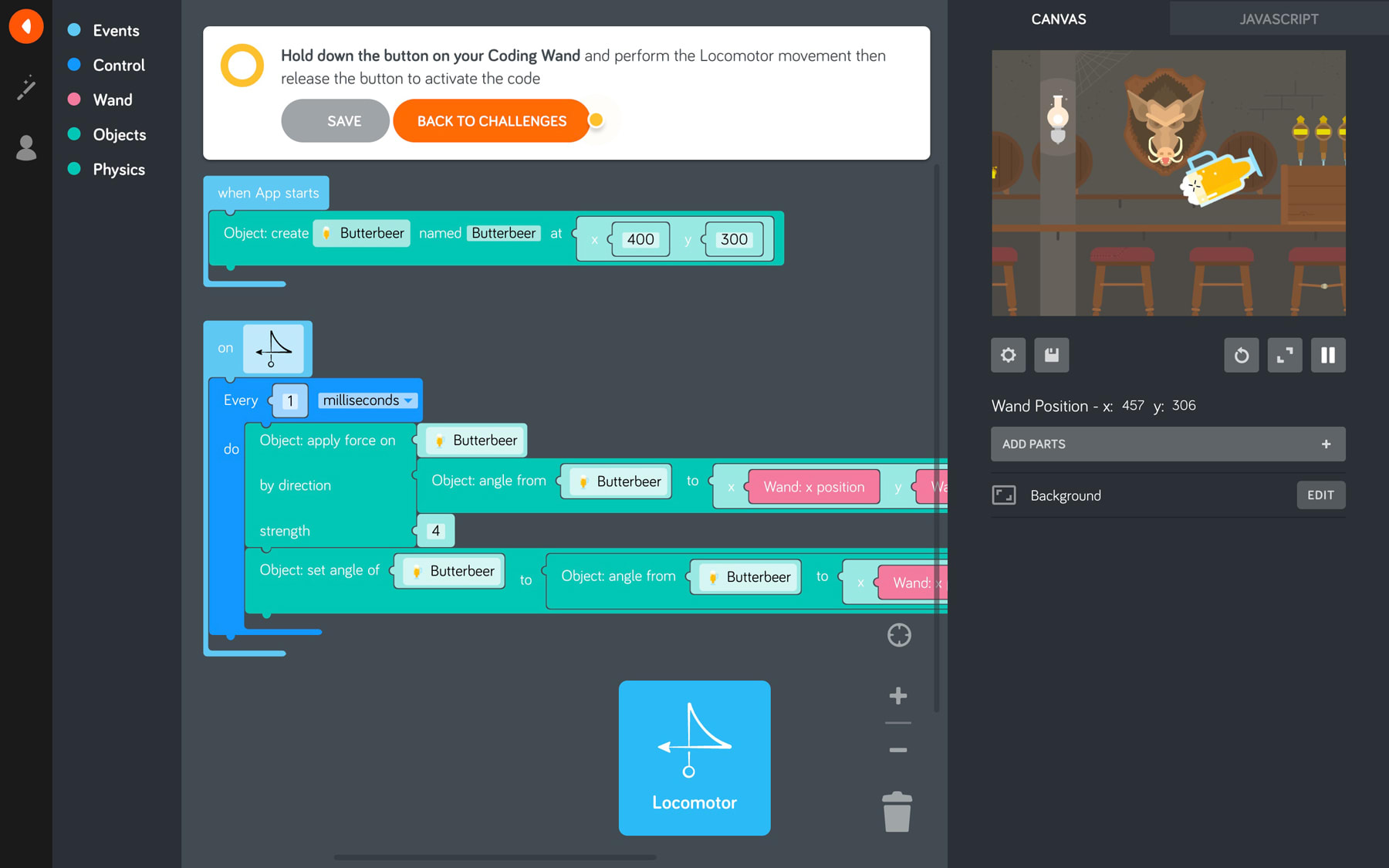 Sometimes the motion tracking is a little wonky

The experience isn't flawless, however. The wand relies on AAA batteries and doesn't have an obvious off button. I took a week-long break from the kit and found that the batteries had already depleted upon my return. Kano suggests removing the batteries in between sessions, which is simple enough -- a single button removes the cover -- but really shouldn't be necessary. I also found the wand tracking to be a little finicky. I frequently had to recenter the on-screen cursor and struggled with some of the more advanced spell gestures because the wand tip tracing was so inconsistent.

These are small nitpicks, though. Kano's $100 wand kit is heaps of fun and highly educational for people who have never tried coding before. If you know a Harry Potter fan with even the slightest interest in science or technology, this would make a great gift. The company's greatest achievement, though, is replicating the sense of accomplishment that Hogwarts students must feel while learning magic. Until I receive my acceptance letter (I'm assuming the owl got lost somewhere...) this is the closest I'll ever get to sitting in a classroom and practicing transfiguration.