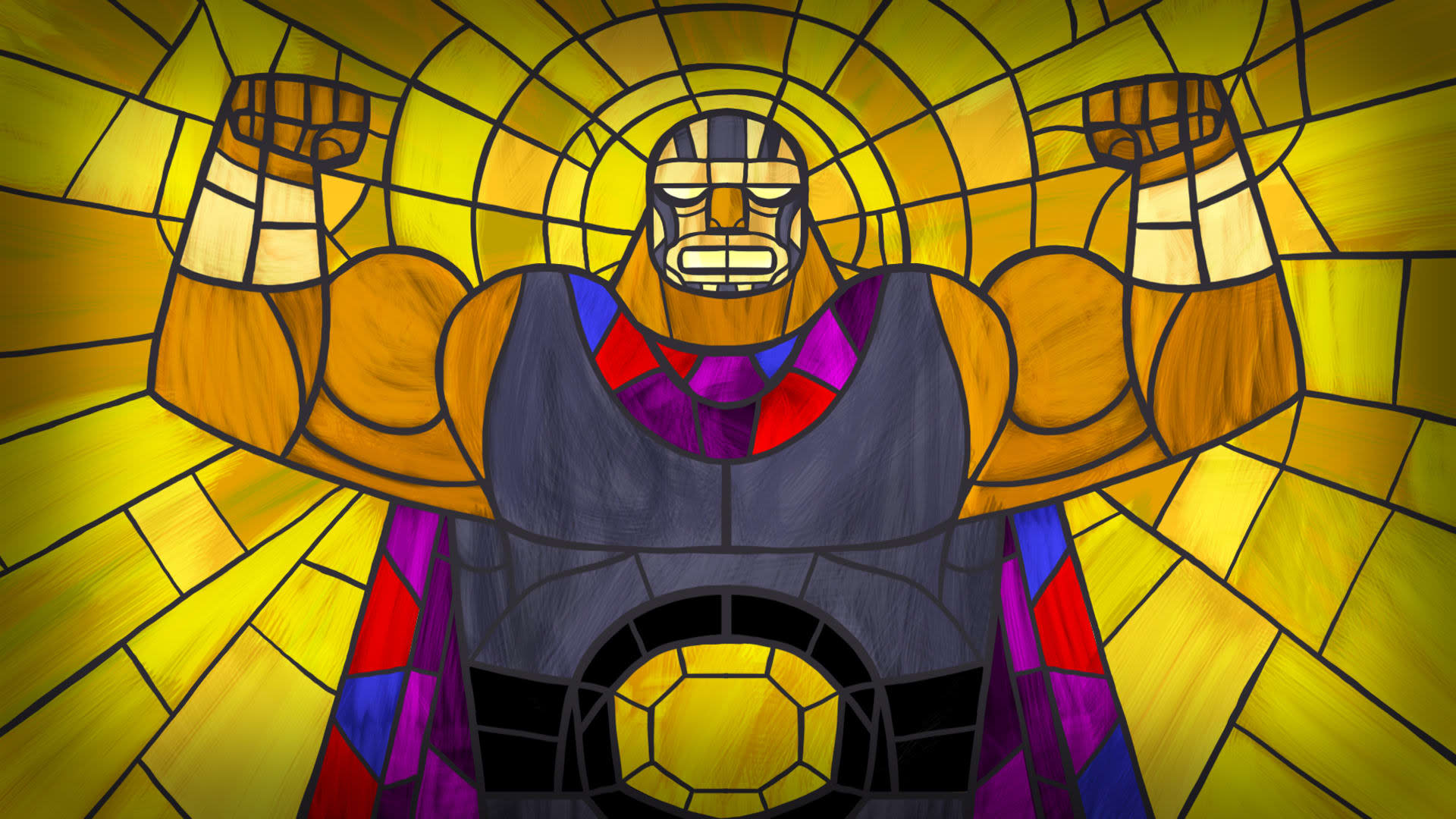 The world of 'Guacamelee! 2'

How personal stories brought color to a darker world.

Have you heard the legend of El águila y la serpiente?

In a dream, the gods told an Aztec leader to take his people into the wilderness of Central America to look for an eagle grasping a serpent on a prickly pear tree -- one creature that could freely travel between the sky and land consuming another that represented wisdom and rebirth.

They wandered, living off fleeting natural resources to survive the changing seasons. That is, until the day they saw an eagle perched on a cactus in the middle of a lake. It was eating a serpent. This was the sign they'd searched for -- the sign they'd found their true home, so the Aztec people built their nation, México-Tenochtitlán on that very lake. Today, we know it as Mexico City.

This symbolic battle between eagle and serpent is embedded in the center of Mexico's flag. You can also find it at the heart of Guacamelee! 2, the 2D action-adventure platformer from DrinkBox Studios.

Several years after the events of Guacamelee!, protagonist Juan Aguacate returns to familiar gameplay loops: directional special moves for both platforming and combat, dancing between parallel dimensions and, on this occasion, visiting alternate timelines. If players can manage the game's breakneck pace, they'll discover that the Toronto-based developer has invited them back not only to an electric Mexican fantasy but also deeper into the core influences and imagination that set the first game apart. It is, after all, a place where they can deliver messages between the living and dead, suplex demonic chupacabras, reach summits with a well-timed Rooster Uppercut and polymorph into god-like chickens.

Late in the sequel's story, an inversion of Mexico's national tableau is created as Juan enters the mouth of a giant stone serpent. "Eagles and snakes are emblematic figures in ancient cultures in Mesoamérica, and they were always in my mind when doing this game," said Augusto Quijano, the game's lead concept artist and animator. "Those kinds of things, they're invisible for people outside of Mexico. But that's the first thing that jumps out for people like me, from Mexico."

Graham Smith, DrinkBox's co-founder, and producer on Guacamelee! 2, gave examples of leftover ideas from the first game, like a nightmarish sentient cactus, Cactuardo, and giant snakes who chase the player but can also be jumped on, platform-style. The path to the sequel's climactic level, Templo de la Serpiente, is fittingly decorated with floating golden Eagle Hooks, which are a new means for players to slingshot around the screen.

"Those kind of things, they're invisible for people outside of Mexico."

DrinkBox pushed to make the sequel distinguishable from the original Guacamelee!, despite how visually realized it already was. For starters, only two veteran locations make an appearance. Their newest siblings are a change of pace from cliché gaming analogs like the lava world or water world. Instead, players visit Los Manglares, a lagoon-esque marsh inspired by Mexican mangroves. The more-water-than-mud variety of bog is intentional, too -- they're the kind near Augusto's home region.

The game's earliest climax, and site of its first boss, is Templo de Jade. Its custodial Jade Skeleton, originally a minor character in the game's first dungeon, inspired a massive redesign of the level post-beta. "There's this main center shaft. We decided we're going to put the skeleton in all the way through. Every time you pass by, the Jade Skeleton is chatting with you," said Graham.

"Jade is an important part of Mayan and maybe a bit of Aztec [culture], associated with water and many other things," Augusto said. He points out that while no legend of a jade temple exists, their anything-goes universe allows them to extrapolate small cultural details. "Take El Dorado, in Peru," Augusto said, "but what if it's different materials?"

The team frequently points to Templo de Jade when describing their re-realizing of Guacamelee!'s environment art. "A lot of the environments now have specific materials made for them," Graham said. "In one of the levels, it looks like there is running water going across the surfaces of the backgrounds. We have [a material] that looks like gold -- the lighting looks quite realistic."

Each substance imbues its titular temple with a hypnotic charm. Jade refracts light with deep hues of emerald and sage, while cross-sections of obsidian swirl under the influence of witchcraft. "We tried to make [Templo de Obsidiana] the starting point of dark magic in this mythology, in this world," Augusto said. Characters now respond to the improved atmospheric lighting, appearing more physically integrated into each level.

For a series that earned excellence in visual-art nominations from both the IGF and Indiecade, the sequel still had to form a visual identity of its own. The team found itself grappling with a denser visual language, compounded by comprehension issues DrinkBox learned from the first game. "Some enemies have colored shields. We had feedback that people who were color blind had issues telling some of the colors of the shields [apart]," Graham said. The solution, according to Steph Goulet, the game's art director, was designing different silhouettes and shapes. The studio also lucked out in bringing a color-blind designer to its team between releases, helping them catch potential design pitfalls sooner when additional colorful elements were introduced.

The new visual flares are at times tempered -- and informed -- by the needs of Guacamelee! 2's plot. With Guacamelee! 2, DrinkBox constructed an alternative "Mexiverse," in which the events of the original Guacamelee! went less favorably for Juan. "In the Darkest Timeline, Juan never survived the end of the first game," explains Graham. Gaming enthusiasts may recognize this as an homage to The Legend of Zelda: Ocarina of Time. In this world, Juan lost to Guacamelee!'s main antagonist, Carlos Calaca, inspiring another hero to rise up and finish the job.

Instead of bringing peace to rest of the world, the sequel's alternate hero, Salvador, descended into madness and created a rift in space-time along the way, now threatening to undo all of Juan's previous heroics. Guacamelee! 2's art direction reflects this world-building in a fundamental way. "We decided to make all of the background environments dark, to contrast from the first game, and to make it feel like you're in a different timeline," Steph said, a move that is reminiscent of Batman: The Animated Series' technique of painting its backgrounds on dark paper.

"It was important to show that the skeletons are fine, you know?"

Guacamelee! focused squarely on Día de los Muertos, the Day of the Dead, but with the sequel's multiverse, the narrative focus has shifted. "I actually made the living world art look less alive than the dead world," Steph said. A visit to Villachula confirms this, subdued by a slow drizzle and a more melancholy vibe. Revisit the town in the dead world, and the rain comes to a halt. Bright, colorful decorations seem to hang in the distance for miles. "It's actually better to be dead," Steph said. "It's nicer! People are happier!"

"The cultural aspect of the relationship Mexico has with death is very different from other cultures," Augusto said. "It's more of a celebration of life than something somber. It was important to show that the skeletons are fine, you know? It's as though they've retired, or are doing what they always wanted to do." Just like that, an idea comes to Steph -- though unfortunately a little too late. "We should have had a retirement home for the skeletons. Damn." A color key created for the Villachula locale.

Over time, as Guacamelee!'s dark sense of humor and playfulness with Mexican culture began catching people's attention, conflicted feelings were brought to DrinkBox's attention about whether a Canadian studio should be the one telling the jokes. "A lot of the genesis of Guacamelee! was seeing how Mexico had been represented before, as very drab and violent, and one-note. You always need somebody else to come to this lawless place to save them," Augusto said. "That was a completely different experience for me, as a Mexican. I wanted to show the other side of it. Mexico, Mexicans -- they love being represented in media because we are underrepresented."

Augusto reviews all the translations produced by the game's Spanish localization. Or, as Augusto puts it, "Mexican supervision! Sometimes, Spanish translations want to be neutral for Latin America. But this game cannot be neutral. It needs to be heavy Mexican slang," he said. "[The translators are] doing their job right, but you need to bias it towards making it sound extra Mexican. That takes time, but it's so important for the game and the story we're trying to tell." "Santa Marimorena" can be heard from gasps in a crowd, Augusto noted. "It's a slang way to refer to the Virgin of Guadalupe, which is a very Mexican emblem."

"Spanish translations want to be neutral for Latin America. But this game cannot be neutral. It needs to be heavy Mexican slang."

Any sign, billboard or storefront won't make it into the final game without Augusto reviewing it first. "I know how proud Mexicans are because I'm one of them," Augusto said. "'Everything was right, but you didn't put the right accent in this word.' You gotta double check those things. For me, that's part of the fun."

Exceptions aren't made for props devoid of text, either. "That's not how you hang a hammock!" laughs Augusto, recalling his response to seeing one in the game. He even asked his cousin for a photo of his own hammock, so that the artists could fix it in their next revision. "The interesting thing is that people notice these things," he said. Both games begin in the quaint town of Pueblucho, where the bottom-half of its trees are painted white. "That's a tradition in the peninsula where I'm from to just put chalk in water, so the ants don't climb up. That's very regionally specific, but then people go, 'Hey! That's how it looks in my town!'"

The team credits recent films such as Coco and The Book of Life for exposing more people to Latin American perspectives. Meanwhile, there are new depictions of Mesoamérica in games like World of Warcraft: Battle for Azeroth and Shadow of the Tomb Raider. "I get a lot of comments from a lot of people outside of Mexico -- Peruvians, French Guiana," Augusto said. "'I have all these stories from my childhood that I want to tell, and I didn't know it was possible.' It's very heartwarming to sort of see the social impact or inspiration."

Even amidst the chaos of Guacamelee! 2, its more poignant messages do not go unnoticed. In one instance, what lies between Juan and a magical calavera (a decorative skull) is a grieving daughter, protecting her long-lost father's belongings. Several trips between their two worlds later, the daughter learns to let go of the past, while the father gets to see his daughter smile again. Thanks to the player, the two are able to communicate across the void.

While discussing the symbolism of Mexico's flag, Augusto recalled the lake upon which Mexico City was built. He mentioned how the old Basilica de Guadalupe -- a church not unlike the one players will find on Guacamelee! 2's Isla Bonita -- began to sink because of it. Worrisome as that sounds, it also seems like a chance to preserve another part of Mexico's rich history. With every detail Augusto shares about his upbringing, it becomes easier to picture how they colored DrinkBox's latest game, and how his untold stories might inspire the next. Perhaps in another five years, we'll find out how many luchadores it takes to lift a chapel into the sky.

'Guacamelee! 2' is out now on PlayStation 4 and PC. It arrives on Nintendo Switch this December.