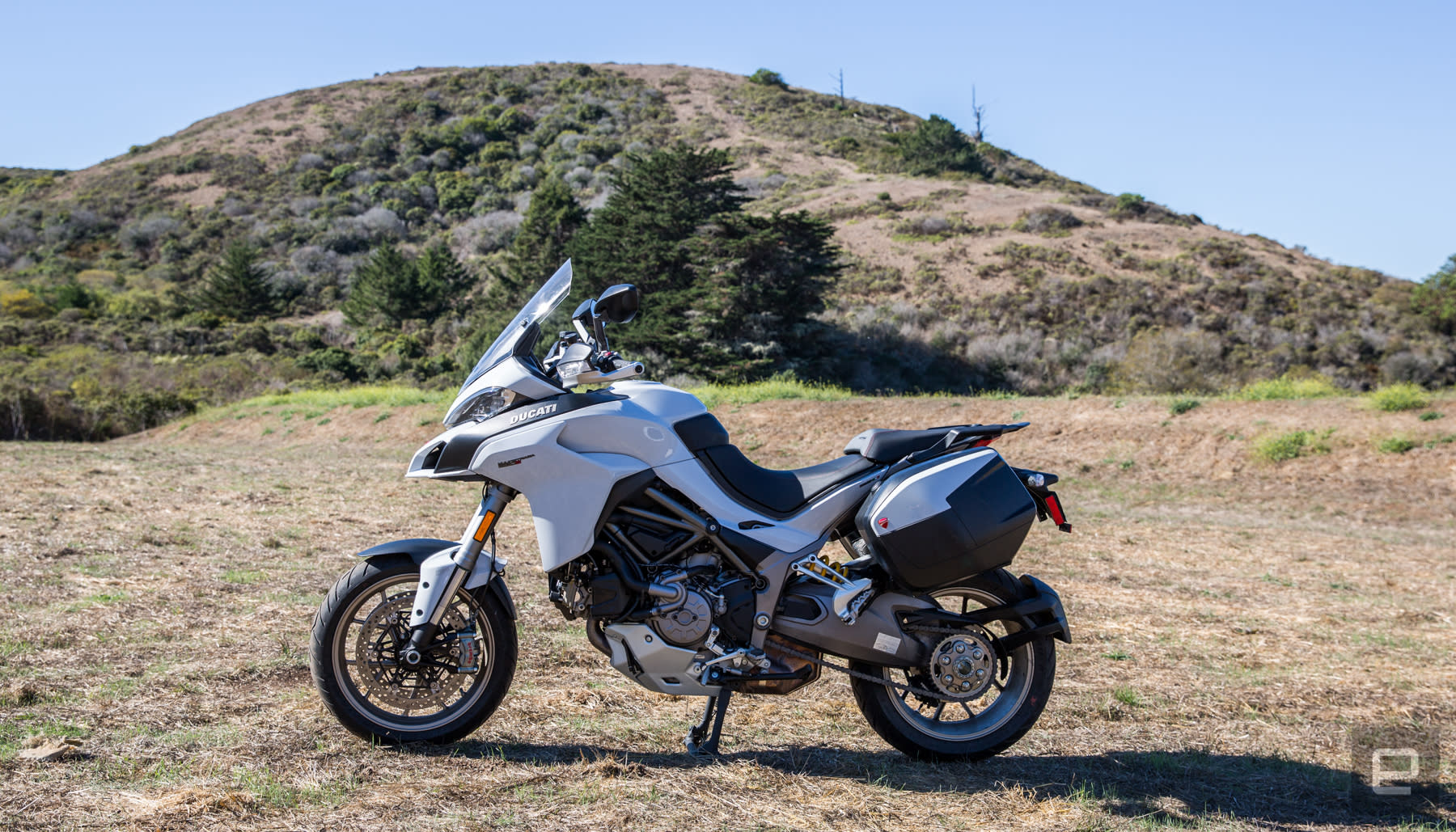 The Ducati Multistrada 1260S is ready for anything

"Let's go on an adventure," I whispered to the Ducati Multistrada 1260S.

For many, motorcycles represent something more than a simple means of transportation. It's everything from the idea of embracing a counterculture (the movie Easy Rider cemented that lifestyle) to the feeling of being closer to the world while traveling. You can get this from almost any bike. What the Multistrada excels at being is the bike you need in almost any situation.

The $21,195 Ducati Multistrada 1260S was built to handle most road conditions. It's right there in the name "Mulitstrada": It means "many roads" in Italian. Still, whenever something says it's built to do "many" things I immediately become skeptical. A "jack of all trades, master of none" comes to mind. After just a few hours on the back of the 1260S, though, I had to admit that maybe it's time to retire that figure of speech.

The Multistrada 1260S shines as a commuter bike and tourer. It can also handle most of the dirt roads riders will encounter on their travels. It does all this thanks to a ride-mode system that changes the characteristics of the bike. The available functions are: Enduro, Touring, Sport and Urban. Each comes with its own adjustments to throttle response, traction control, suspension, ABS (anti-lock brakes), wheelie suppression and a host of other features. 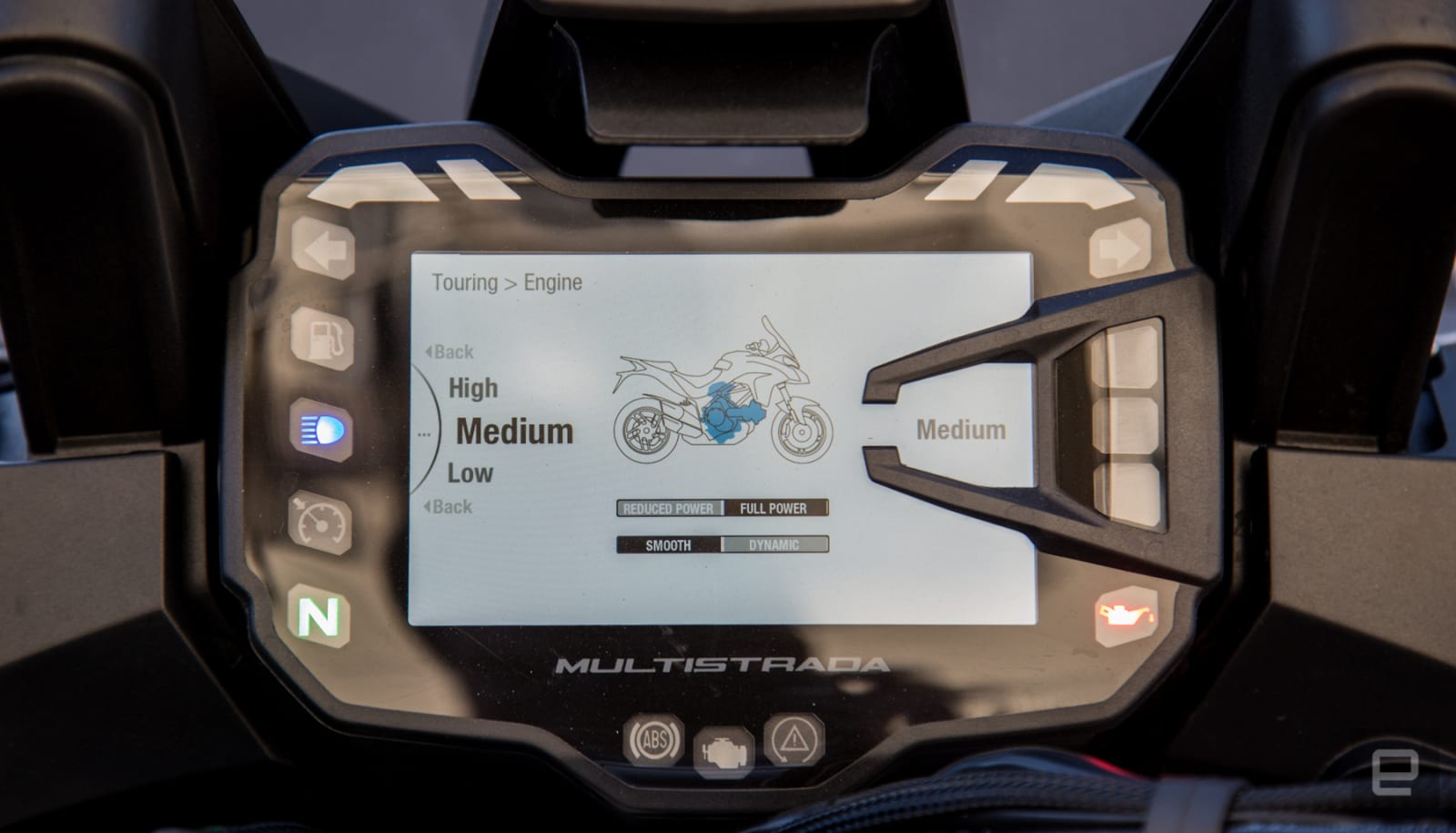 The idea is that it's four bikes in one. The reality is that it's actually four bikes in one. I spent most of my time with the bike switching between Touring and Urban. Commuting was easier thanks to the lower gears and suspension ready to tackle all of San Francisco's holes and non-stop construction. The Touring mode adjusted the bike for longer rides on smoother asphalt traveling at higher speeds. It made my trip to Big Sur a delight.

Enduro helped me navigate the smattering of gravel and off-road I could legally do in the Bay Area, while Sport was ready to unleash all of the Multistrada's 158 horsepower and 95.5 foot-pounds of torque. So yeah, it'll go fast when you need it.

Within each of these modes, riders can also fine-tune all the settings. If you want to go touring but would like a bit more throttle response or less traction control, you can adjust that on the bike to your liking.

All these features mean sitting down with the bike's 403-page PDF of the owner's manual. Simple things like locking the handlebars isn't so simple without some guidance. Trying to figure out how to configure the bike (and lock the steering) on my own was a fruitless endeavor. Mostly because I wanted to ride more than fiddle with settings. But it's time well spent and as bikes get smarter, get ready to set aside time to learn as much as you can before riding off.

While the on-bike buttons deliver what you want from, it's actually the Bluetooth-connected app's ability to build and save custom ride profiles that makes fine-tuning the experience so great. As you adjust settings, the app surfaces what each feature does so you're not changing things without an understanding of how the bike will react. 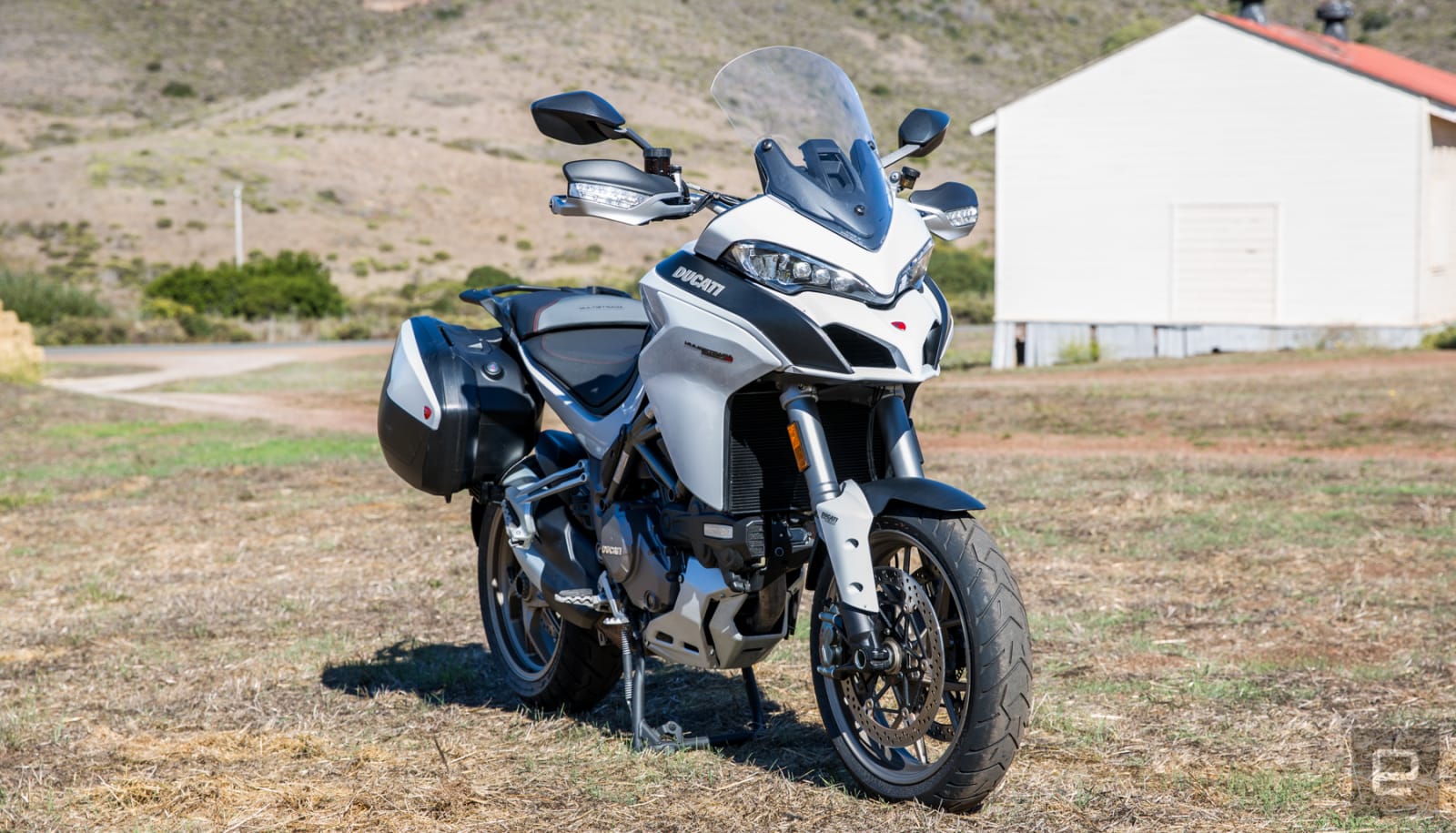 Riders then send custom profiles to the bike when it's turned on and within Bluetooth range and after being asked by the bike to approve the change, you're ready to ride. If you're someone that rides multiple types of roads and in multiple environments on a regular basis (like I do), it's wonderful to know that the Multistrada is ready to tackle each trip exactly how you want it to, instead of delving into the on-bike menu system.

While riding, the Multistrada felt stable at all speeds. Lane splitting on San Francisco's notoriously narrow roads and speeding through the switchbacks of the Northern California coastline were both achieved with ease. The bike has enough power to surprise you (and other drivers) when you leave the lights, and at high speeds I had no problem overtaking tourists on backroads or commuters on highway 101.

The Brembo brakes (one of the top manufacturers of brakes for cars and motorcycles) and ABS are outstanding. The stopping distance is so impressive I was surprised by how quickly the bike came a halt during my first ride. Fortunately, no one pulled out in front of me at the last second while I was testing the bike, but a few hard-stop tests gave me the confidence that at least I'd have a fighting chance if that happened.

The Multistrada also has a host of other features that add safety or convenience: In San Francisco, the vehicle hold feature (stops the bike from rolling backward when you're trying to take off on a hill) was a real wonder. As for the 5-inch display, it goes into dark mode when the sun goes down -- a nice touch for someone like myself with light sensitivity. The bike also has a keyless ignition system; you just walk up to the bike and start it. 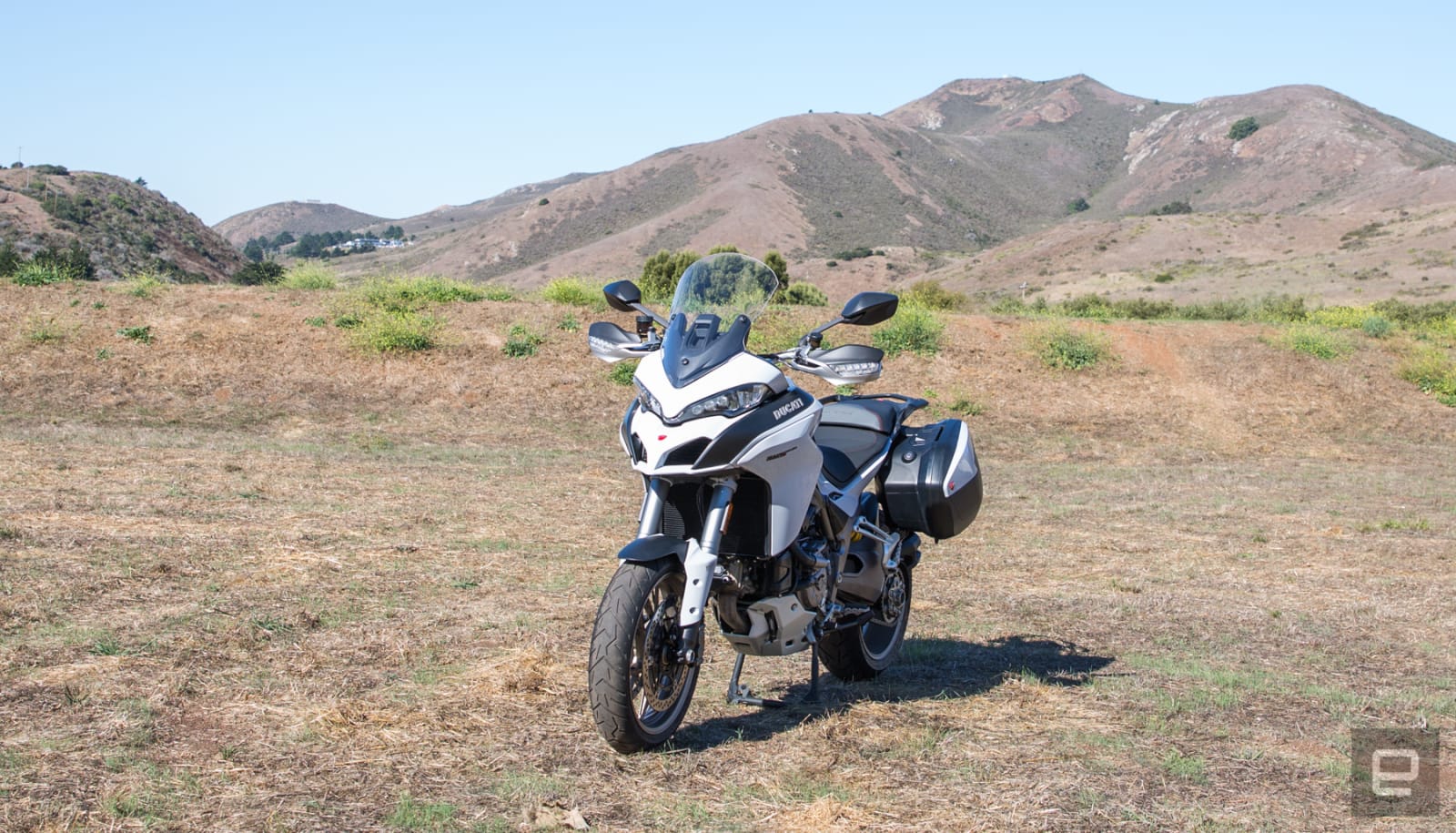 Meanwhile, the quick shift system (DQS) is great at getting you through gears well, quickly. Although, for some reason, it also meant I had difficulty getting the bike into neutral for the first week. It was a lot of shifting into first and second while trying to find the sweet spot at an intersection -- fortunately, you can turn the feature off. I didn't, because I finally got a hang of it after two weeks of nearly daily riding. If you're a weekend rider, though, it might take longer.

The weird inability to take the Multistrada 1260S out of gear aside, the motorcycle is an outstanding piece of technology and machinery. There's always a bit of a give and take for bikes. Usually, if a bike is great for commuting, it's not so great on long stretches. Or it's ready to hit gravel roads, but there's no way you're going to be taking sharp corners with any sort of enthusiasm.

Ducati went all in with the Multistrada (which explains the $22,000 price tag) making it something you'll be happy to ride in almost any circumstance. Take it on a long trip to a far-away city where you'll encounter some amazing switchbacks then have to navigate dirt roads to camp out. It's ready for all that. It's ready to take you on an adventure.

All products recommended by Engadget are selected by our editorial team, independent of our parent company. Some of our stories include affiliate links. If you buy something through one of these links, we may earn an affiliate commission. All prices are correct at the time of publishing.
View All Comments
The Ducati Multistrada 1260S is ready for anything