Custom-made smart glasses pick up where Google Glass left off

Earlier this month, Thalmic Labs announced it would be ending the production of Myo, a gesture-controlled armband that it's been developing for the past few years. The company has now changed its name to North and have decided to shift focus to an entirely different project. Today, it's finally ready to reveal what that project is. It's called Focals, a pair of smart glasses that uses holographic display technology.

"Focals are a pair of everyday smart glasses that are designed from the eyewear-first perspective," Stephen Lake, North's CEO and co-founder, told Engadget. "We realized that it can't be like previous approaches of smart glasses, where they try to stick a computer or tech on your face."

At first glance, Focals do look very similar to a regular pair of glasses. Look a little closer, however, and you might notice the end pieces at the sides of the frame are a little thicker than usual. That's because the one on the right houses a tiny projector that reflects off an element inside the lens and focuses the light back into your eye. The result is a holographic image -- one which is formed by the diffraction of light -- overlaid onto the real world that no one else can see. 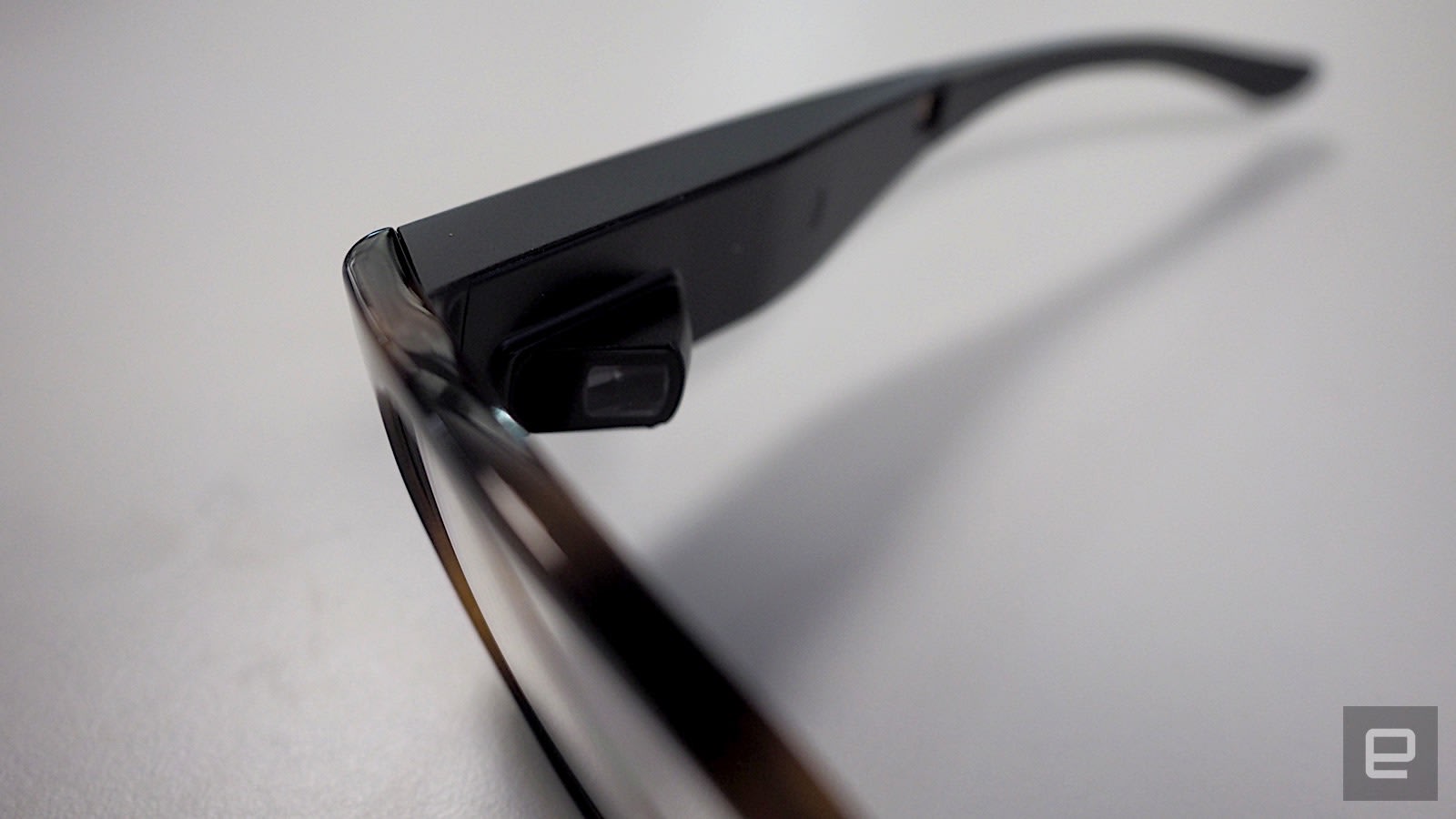 "Previous attempts at this took a little LCD screen, wrapped it around and put it in front of your eyes through some bulky optics," Lake continued. "They never got it small enough to fit in regular glasses. We invented a new technology from the ground up that would."

As for what kinds of holographic images, well, they're pretty utilitarian. Think basic information like the date and time, incoming messages, or your day's calendar appointments. Lake says that Focals aren't designed to be augmented reality glasses like Magic Leap or Microsoft's HoloLens -- you're not going to use these for gaming or project collaboration. In fact, Focals aren't designed for big images at all. Instead, Focals are for normal, ordinary use; sort of like a heads-up display for everyday life.

In a sense, Lake says that Focals are designed to take your head away from being buried in your phone. "The core philosophy of the product is about keeping you present in the world," said Lake. "It's subtle and designed around the human experience." 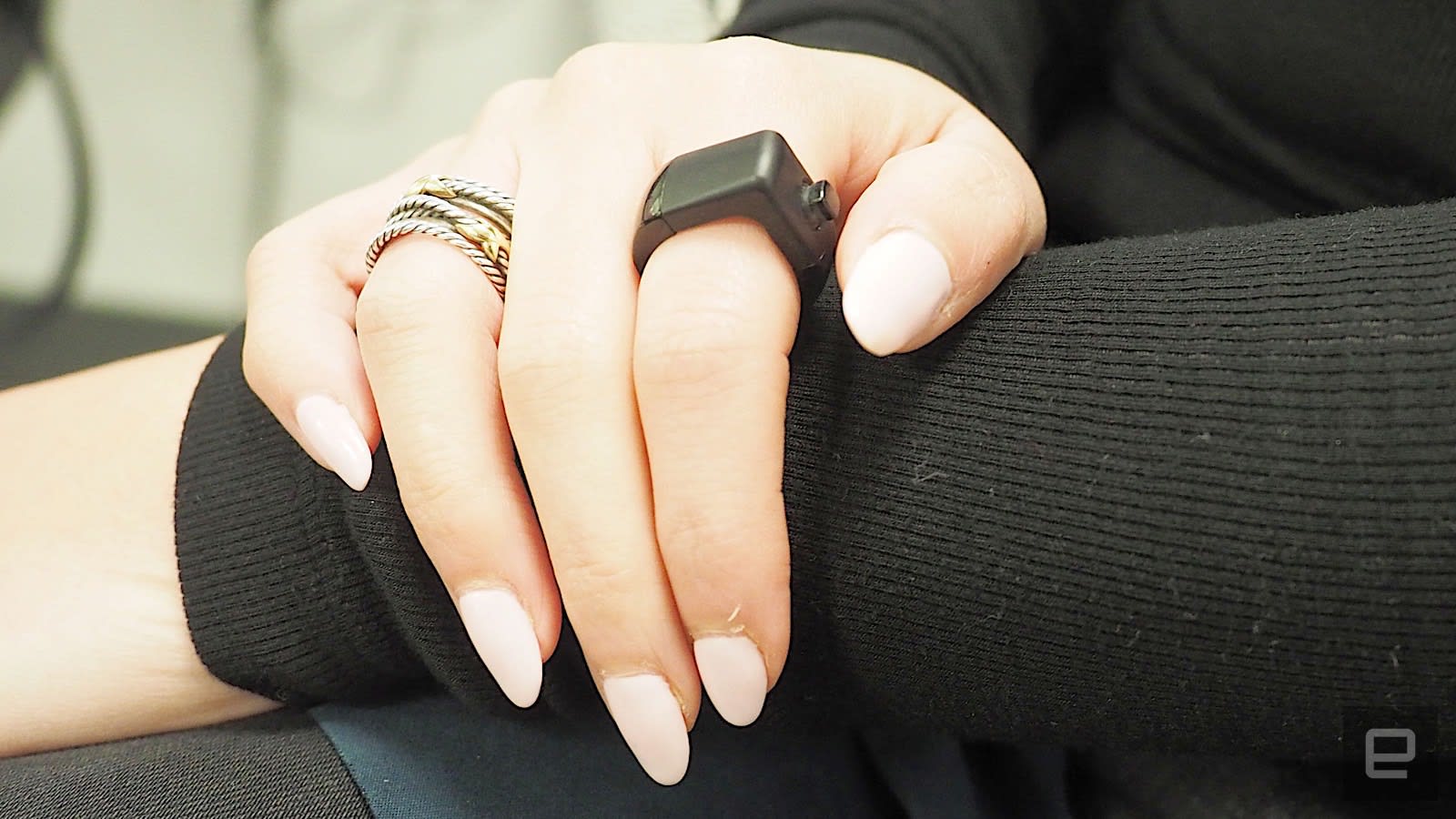 One of the ways it achieves this is by relegating all the controls to a ring you wear on your index finger. The ring is called the Loop, and it has a joystick as well as a little D-pad (That's why the Loop needs to be on your index finger, so you can use your thumb to manipulate the joystick).

"Some of the previous products with a tech-first approach, they were putting touchpads on your head," said Lake, an example being Google Glass. "And it was just awkward and weird, to be tapping at your glasses and talking to yourself during a meeting." Using Loop, on the other hand, is very discreet. You could be going through your messages with your hand in your pocket, without anyone ever noticing.

I should note here that you can't use Focals for making phone calls. "We're keeping the initial set of features carefully curated to experiences that would look great and feel natural on Focals," said a North spokesperson. "The UI on Focals is built around brief, glanceable interactions, and making calls via the glasses didn't fit that intent."

I had an early look at the glasses, and I was impressed at how normal they looked. Constructed out of what appears to be a high-quality polymer, the glasses are slightly chunky in a geek chic sort of way, and come in different styles and colors. There were round shapes, a more traditional D-frame style, and dark colors like black, a gray fade, and tortoiseshell. The Loop ring comes in matching colors, too.

Focals were designed by Marie Stipancik, an eyewear designer by trade, that had never worked in technology before. "We wanted styles and colors that are flattering and that feel comfortable on the face," said Stipancik, who joined the team three years ago. "We wanted the styles to look familiar." 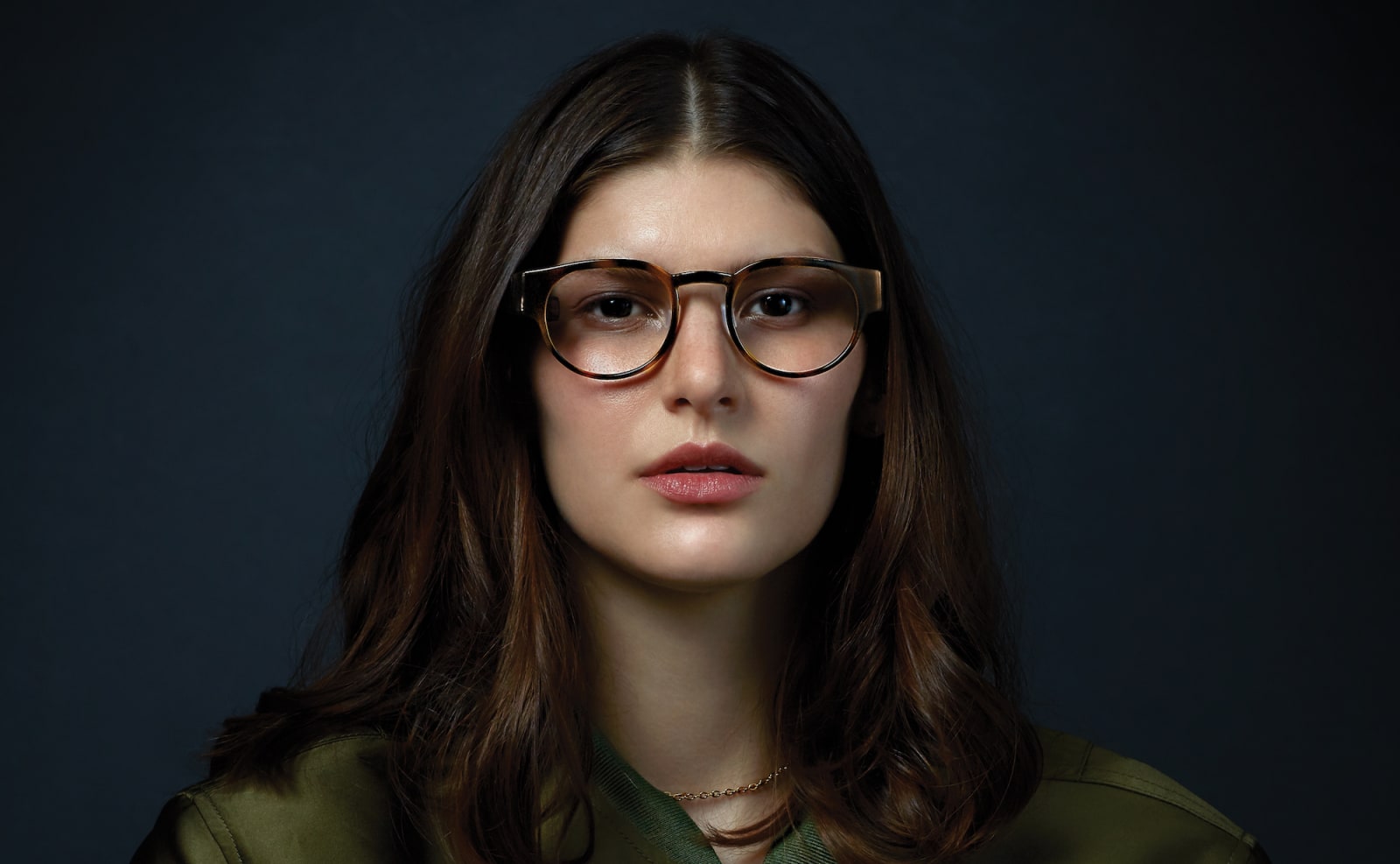 Of course, one of the problems with designing eyewear is that one size does not fit all. Every single one needs to be customized. So North will be doing just that, with a one-of-a-kind shopping experience. It's setting up two retail locations -- one in Brooklyn and the other in Toronto -- where customers can come in and have their face digitally scanned to find the perfect nose bridge and the perfect size. From there you'll pick your preferred color and style, and voila, you'll get your own custom smart glasses. "It's all done to your personal preference, and we hand-build it for you," said Lake.

Unfortunately, I was unable to undergo such a custom experience, but Lake and his team did bring a few different Focals samples for me to try. I wasn't able to find one that fit my face exactly, so I initially had trouble locating the holographic image. Stipancik said that this wouldn't be a problem in an actual retail environment because the display would be calibrated appropriately.

After a little futzing, I was able to see the holographic image floating in front of me. Instead of a rectangular screen, all I saw was the time in bright white numbers. Then, using the Loop's joystick, I flicked to the right to see messages, calendar appointments and the weather, and pressing the stick down dives deeper into each category. So if you select a message, for example, you can respond to it with one of several smart replies, similar to the ones you see in Gmail. Using the Loop felt really natural, and certainly a lot more discreet than having to tap on the side of your head.

Another feature is Alexa integration. With this, instead of using the Loop joystick, you can just say "Alexa, show me the weather" to see a five-day weather forecast pop up in front of you. Lake said that North is also working on a "Go" UI experience that'll integrate other apps like Uber, so you can request a ride with the glasses, or Maps, which can give you turn-by-turn walking directions. What I thought was especially compelling was the idea of contextual apps, like restaurant recommendations if you happen to be in a particular neighborhood, or NextBus integration to see how long the next train will arrive.

It was kind of incredible to be able to see these floating images and numbers, but also be able to have a conversation and talk to the people in the room. On the other side, as I was talking to Lake and Stipancik, I could hardly tell they had their holographic displays on as well. The only indication I could see was a tiny little reflection dot on their glasses. Like Lake said, I can see how something like this can make you much more present than glancing at your phone or a smartwatch.

That said, the holographic display isn't persistent -- it goes away after awhile. Which is a good thing, because I imagine that it would be pretty distracting if you're driving or doing an important task that demands your full attention. Lake said that the primary purpose of Focals is still to be your normal, everyday glasses, with the holographic display coming in only when you need it. To do that, just press on the Loop's joystick button and it'll pop up.

Plus, after several minutes using the glasses non-stop, I actually felt the Focals heat up on the side of my head. Lake said that's because the display is really not meant to be active for that long. Instead, it's designed only to be used in short bursts, like at a bus stop or while in a cafe. With normal usage, Focals should last around 18 hours between charges, and there's also a charging case that'll keep it topped up when you take them off. 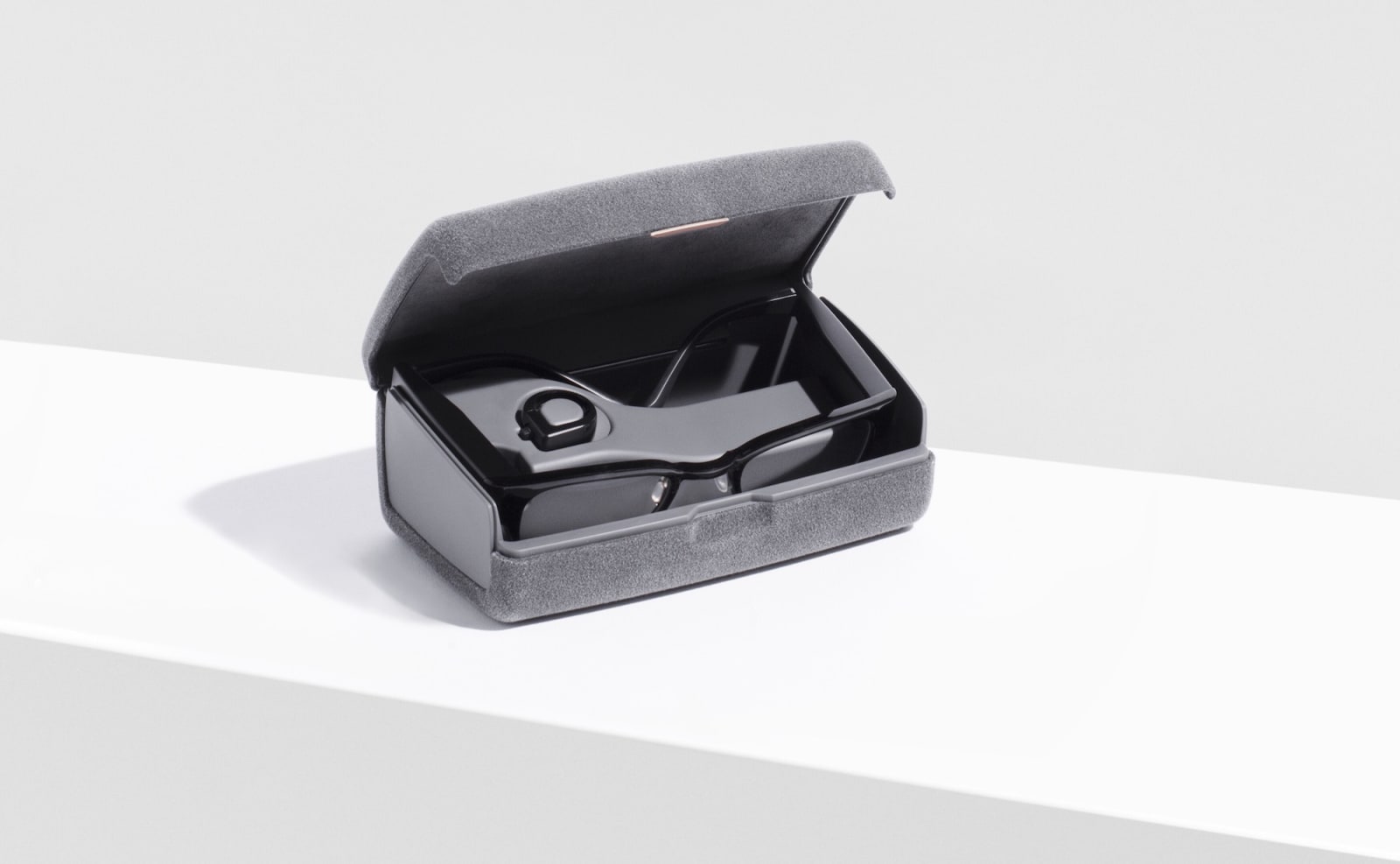 I also question the practicality of these glasses. I understand that phones and smartwatches take you out of the real world, and it's better to have something like smart glasses where you can be more present with your friends and family. But the glasses still demand some kind of attention, and I worry when the only way we can escape from technology is to throw more technology at it.

Plus, well, these glasses are not cheap. They cost at least $1,000 each. That does include everything -- custom-fit glasses, prescription coating, the Loop ring, a charging case, plus a pair of sun clips. But boy, that's a lot to swallow for a piece of tech that isn't really all that necessary.

If you do want to try these out though, you can do so soon. The North locations in Brooklyn and Toronto open in November, and you can schedule an appointment for your very own Focals fitting starting today.