Apple iPad Pro (2018) hands-on: Even closer to a computer

Maybe you can finally replace your laptop with one of these.

For years now, Apple has strongly suggested that the iPad represented the company's vision for the future of computing, and for years, that felt like a bit of a stretch. Sure, crucial updates like iOS 11 gave the iPad a much needed dose of functionality, and that was enough to get some people looking at Apple's tablets as potentially valuable alternatives to traditional laptops and convertibles. This year... well, this year is a little different. I just spent some hands-on time with the updated iPad Pro -- specifically the bonkers 12.9-inch model -- and it's starting to feel more like a proper computer than ever. That's partially because of its more angular, no-nonsense design but also because of all the stuff Apple packed away inside.

Actually, let's talk about design for a second: By embracing a new, squared-off look, Apple has crafted a meaningful visual differentiator for its tablets. The standard, no-frills iPad and the Mini that still persists despite not having really been updated in years are rounder and friendlier in that traditional Apple way. The new iPad Pro, meanwhile, sports an aesthetic that's more in line with the company's laptops. To me, at least, that's a clear indicator that the iPad Pro isn't just business as usual.

More importantly, this thing is almost shockingly comfortable to hold and use. I've used the 12.9-inch Pro in the past, and while I could cradle it in my arm and write on it with an Apple Pencil, the whole thing felt so cumbersome that I never wanted to. This year's Pro? I can pick it up with one hand and actually start using the thing with minimal hassle. The iPad Pro has always been about giving you the right amount of power (if not the most power) when you need it, and this cleaner, lighter design embodies that idea much, much better than before.

Part of what makes this feel like a huge step forward is the edge-to-edge display Apple adopted this year. It's a Liquid Retina panel like the ones we recently saw in the iPhone XR, but it retains the same high resolution as last year's big Pros. That was a long-winded way of saying that the iPad Pro's screen looks amazing. But that's hardly anything new here: I never had an issue with earlier Pros, and Apple's ProMotion screen tech still allows for a super-slick, 120Hz refresh rate.

In other words, this is the kind of display you'd expect from a premium iPad; there's just less stuff around it. Apple says the new Pros were engineered so you could pick them up and use them in any orientation, but that's not completely true: There's a FaceID sensor and camera wedged in the top bezel, and iOS will prompt you to uncover it if you pick the iPad up by the wrong end. 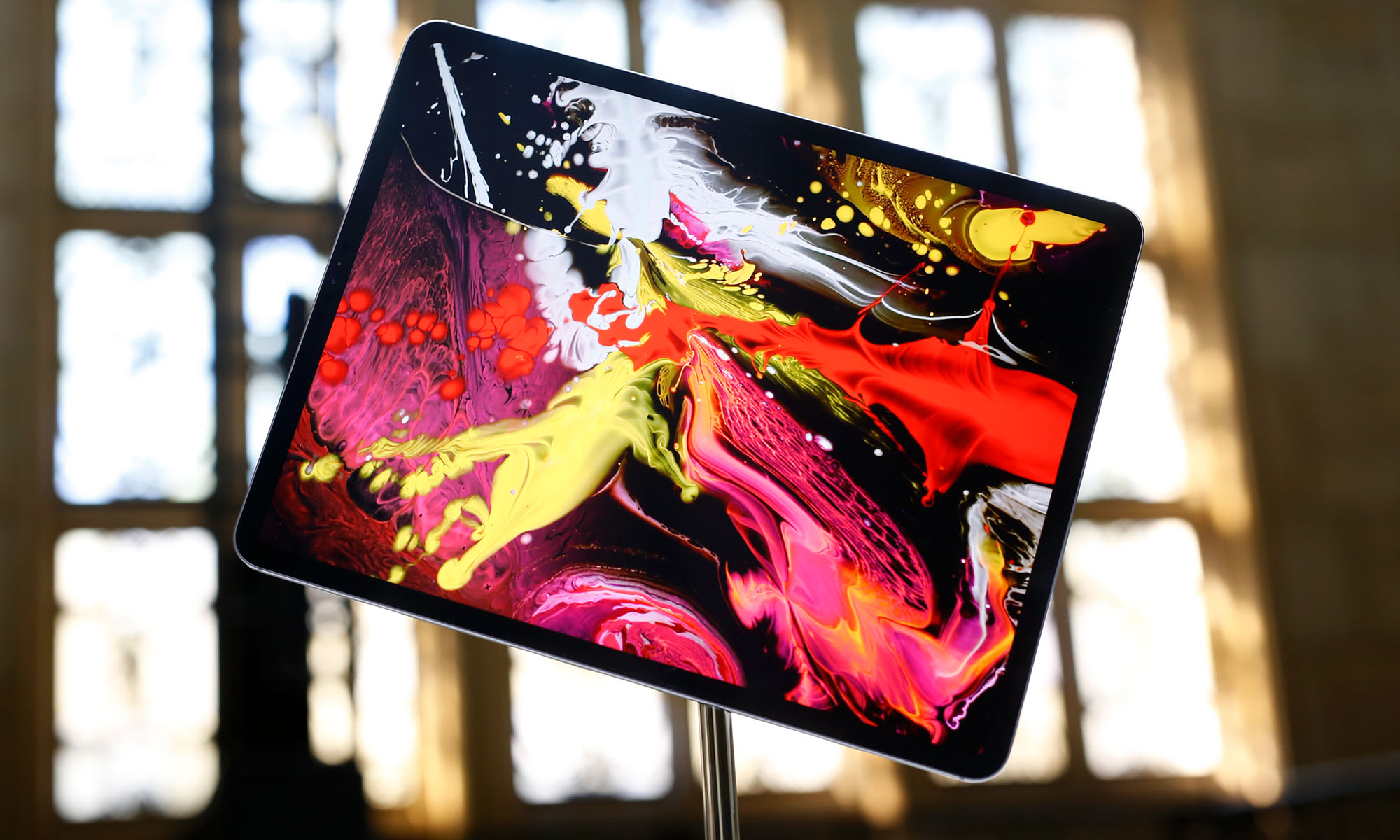 Much as I like this new design, there is one thing that rubs me the wrong way, and it has a lot to do with the mixed messages Apple is sending. In its presentation, Apple made it clear that music professionals like DJs have been fans of the iPad for awhile and that the new power afforded to them by the A12X Bionic chipset would help them spice up their performances. That's cool and all, but I wonder how those DJs feel about the iPad Pro lacking a headphone jack. Seems kind of important, no?

People who lean on iPad Pros to actually get stuff done should benefit from the A12X Bionic, a tweaked version of the chipset we first got to know in the iPhone XS. I haven't been playing with these iPads for too long, and it's difficult to tell exactly what kind of performance gains to expect based off these demos. That said, the handful of AR apps I tried out seemed smoother and more stable than ever, and a setup dedicated to visually lush DJ software looked appropriately rad. We'll see how they do in real-world testing soon. 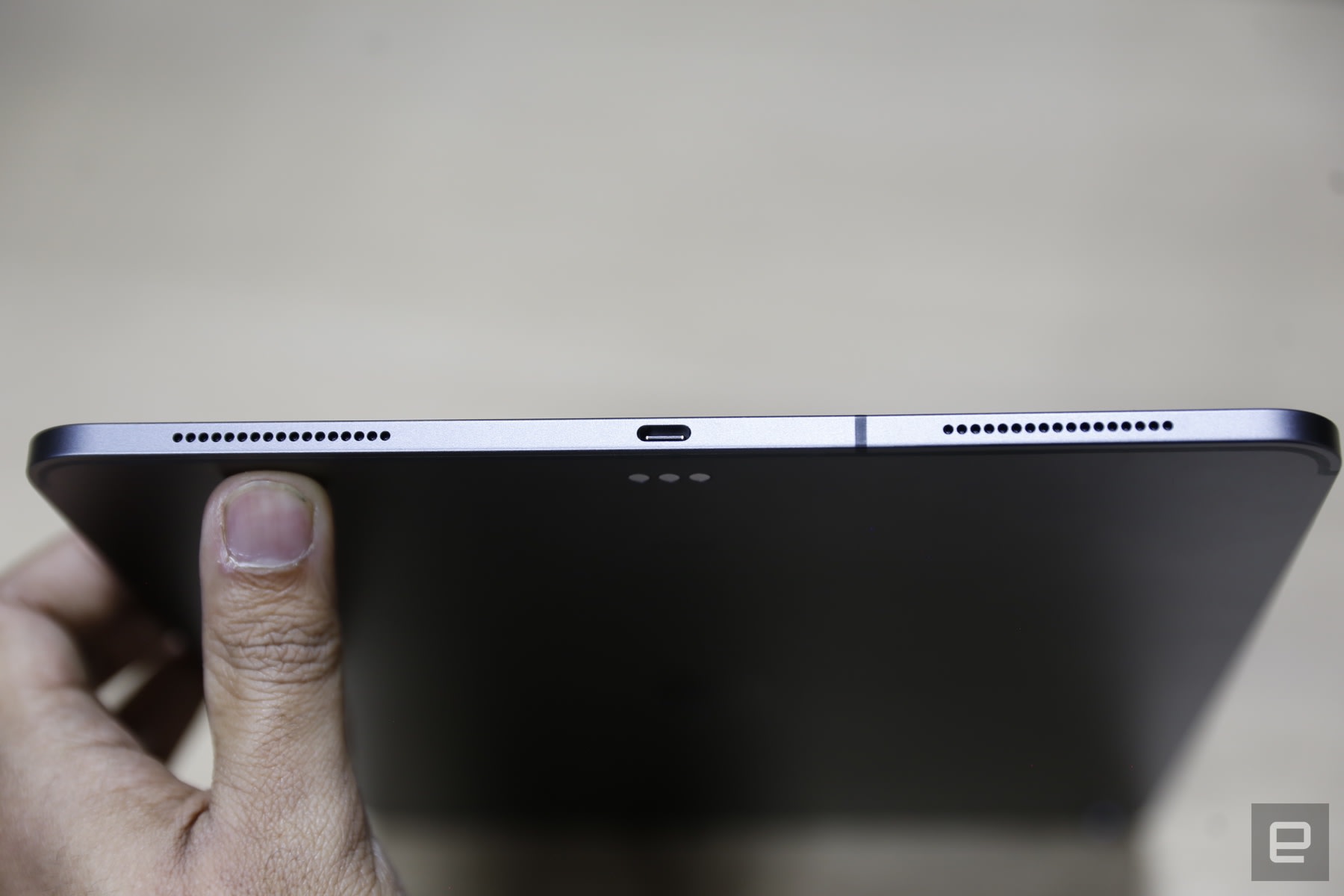 Speaking of important, how about that USB-C? The shift has been rumored for years, but it's finally here, and it stands to change the way people think about how to use iPads. In the past, if you wanted to hook other devices up to your iPad, you'd have to rely on peripherals and connectors to bridge the gap between Lightning and whatever else your hardware required. Moving to a standard USB-C port makes the new Pro line feel more akin to a proper computer, and Apple has already pitched several ways that professionals have been able to work these iPads into their daily flows. Unfortunately, we still don't have a great idea of what kind of external devices the Pros will play nice with; Apple has suggested you could connect a camera and save images directly to the iPad, but there's surely more at play here than we're currently aware of. (I'll update this story as I learn more.)

With that said, I did get to try a few accessories that don't use that USB port: the updated Apple Pencil and the magnetic Smart Keyboard. The former feels similar to the original, just with a flat side that you'll use to attach Pencil to the iPad's side for charging. (It's too bad that the magnetic latch and charger are only on the iPad's right side though.) Using it to wreck lovely pre-drawn bits of art in Procreate was about as fun as you'd expect, and the double-tap feature to jump between preset actions is legitimately great. Will it change the minds of people who weren't sure of the Apple Pencil in the first place? I sort of doubt it, but this is still a worthwhile update. 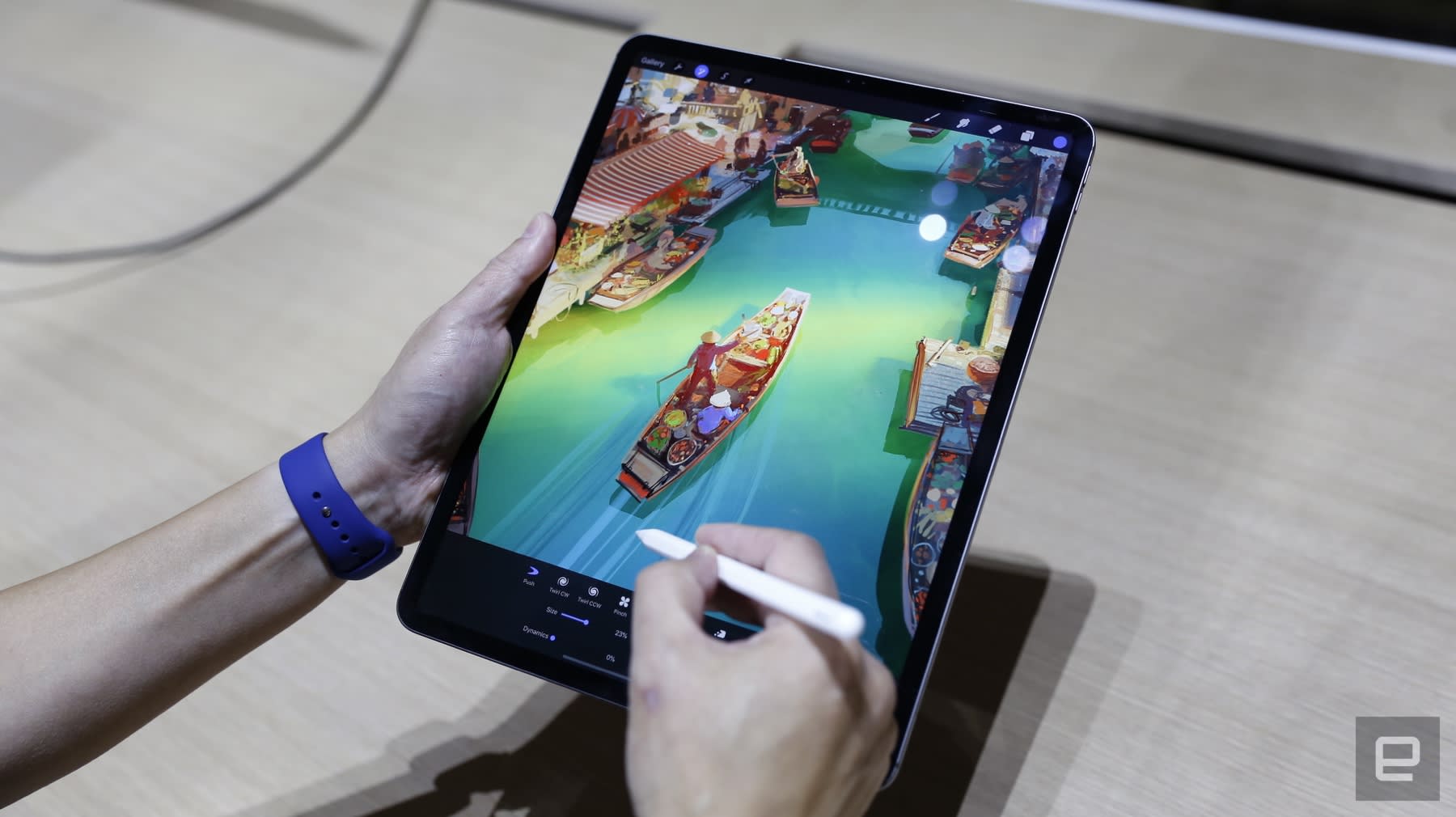 And then there's the keyboard, which now attaches to a smart connector sitting low on the iPad's back. It's still covered by a sort of spill-proof fabric membrane, but it now supports two angles -- one for when the iPad is on a desk and another for when it's on your lap. Again, this is one of those thoughtful updates that makes the accessory noticeably better, but I still wouldn't say it's a must-have.

So yeah, this version of the iPad Pro feels more like a computer than ever. I mean, just remember you can buy one of these things with a whopping 1TB of onboard storage. Overkill? For average users, sure, but it's not so crazy an idea if you're planning to load up a Pro with RAW files or CAD schematics like Apple suggests. Among the power provided by the A12X, the shift to USB-C, the massive storage options and the improved accessories, the iPad is better equipped than ever to take on -- and potentially replace -- devices like Microsoft's venerable Surface. The thing is, despite its many improvements, iOS still fundamentally feels like a mobile-first operating system, and there's a tendency for some people to take it less than seriously as a way to actually be productive. iOS updates are inevitable though. Perhaps more importantly, Apple's mobile hardware has finally evolved to a point where it's a viable rival to some of personal computing's best options. That's a big step all on its own.

All products recommended by Engadget are selected by our editorial team, independent of our parent company. Some of our stories include affiliate links. If you buy something through one of these links, we may earn an affiliate commission. All prices are correct at the time of publishing.
View All Comments
Apple iPad Pro (2018) hands-on: Even closer to a computer