Can the Peloton formula work for weight training?

I've been going to the gym regularly for a few years now, but mostly to spend some time on the elliptical and stationary bike. There are free weights but I've always felt a bit uncomfortable going anywhere near them; they tend to be used by guys who grunt a lot and drop the weights on the floor. I just feel so judged (even if they don't actually care). And I'm not the only person who wants to do some weight lifting but can't for reasons like inconvenience or embarrassment. Tonal, a home weight training system that uses electromagnets, is aimed at people like us.

Yes, electromagnets. Instead of lifting large pieces of heavy metal, with the Tonal you pull on cords attached to the system, which basically pulls back so you get the tension you need. The hardware is encased in a large black slab mounted to your wall with a screen on the front and two adjustable arms that you pull out from the sides and then position -- up or down, side to side -- depending on the exercise you're doing. The cords offer a variety of interchangeable grips and other attachments, including a bar. The system is actually pretty versatile, especially with the included bench. 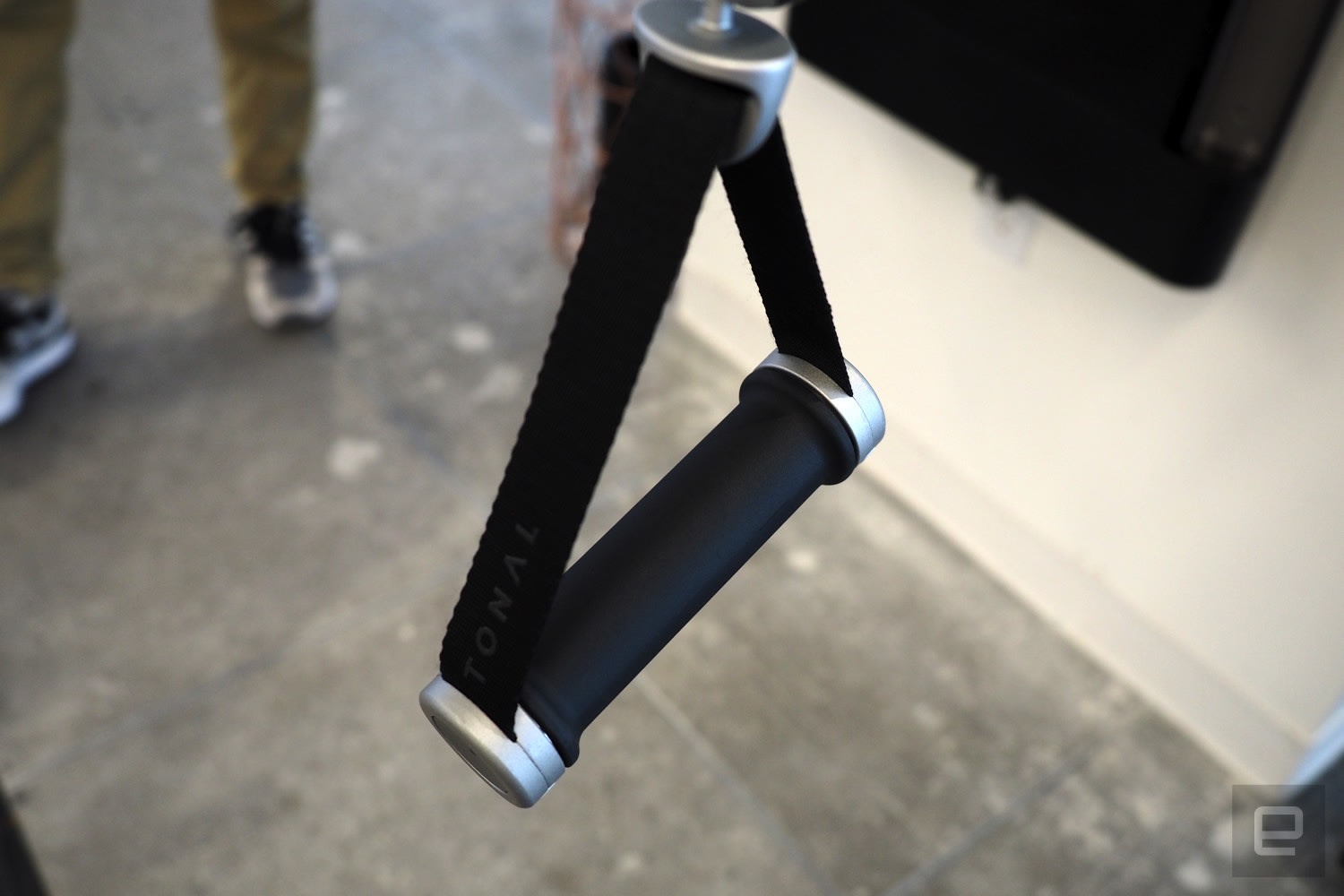 The technology is pretty impressive at at glance. Pushing a button on one of the grips activates the magnets, and suddenly the rather slack cord in my hand is pulling on my bicep. I tried various exercises, pulling in all sorts of directions in various sets of 10. The whole thing worked smoothly with no danger of me dropping weights on the floor... or myself. When I was done I could easily fold everything back into the black slab.

Calling it a black slab isn't doing it justice, though. It's really a giant touch tablet, one that lets you select from a variety of workouts and then watch the accompanying videos that will walk you step by step through each exercise. The system keeps track of where you're at, repeating sections of the video it notices you struggling with. It responds to how hard and fast you're pulling too: If it senses you're starting to flag because of fatigue, it will lower the weight accordingly so you can finish your workout. For example, when doing some lifts I started at seven pounds per arm, but as I continued I started to falter, and the system automatically lowered it to five. 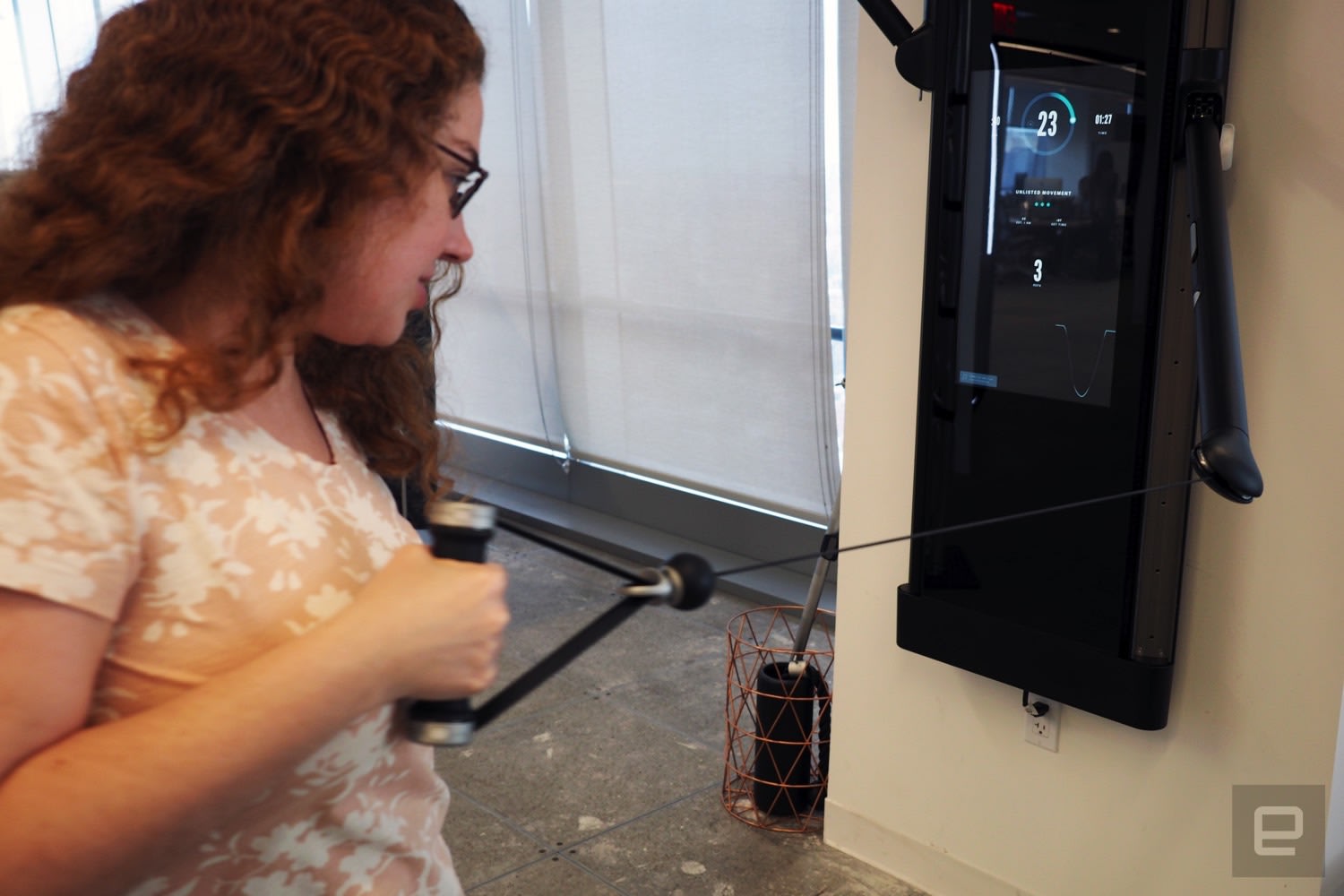 Tonal is meant to be as personalized as having your own personal trainer. When you first set it up you take a strength test that assesses your baseline strength. It's far from one-size-fits-all, as there are different programs based on what you want to achieve. Are you looking to build some muscle mass? Or improve your cardio? Or maybe you just need some body positivity. Tonal has videos and specialized routines written for all of these scenarios, each with its own real-life trainer who guides you through the material in a series of recorded videos.

It may not be a direct one-to-one connection, but it is responsive, in how videos will loop as many times as needed for you to get it right, and you never feel rushed (even though there's a timer). It's also constantly evolving: The trainers record new videos on a daily basis, creating a deep library of content that will hopefully keep you coming back. 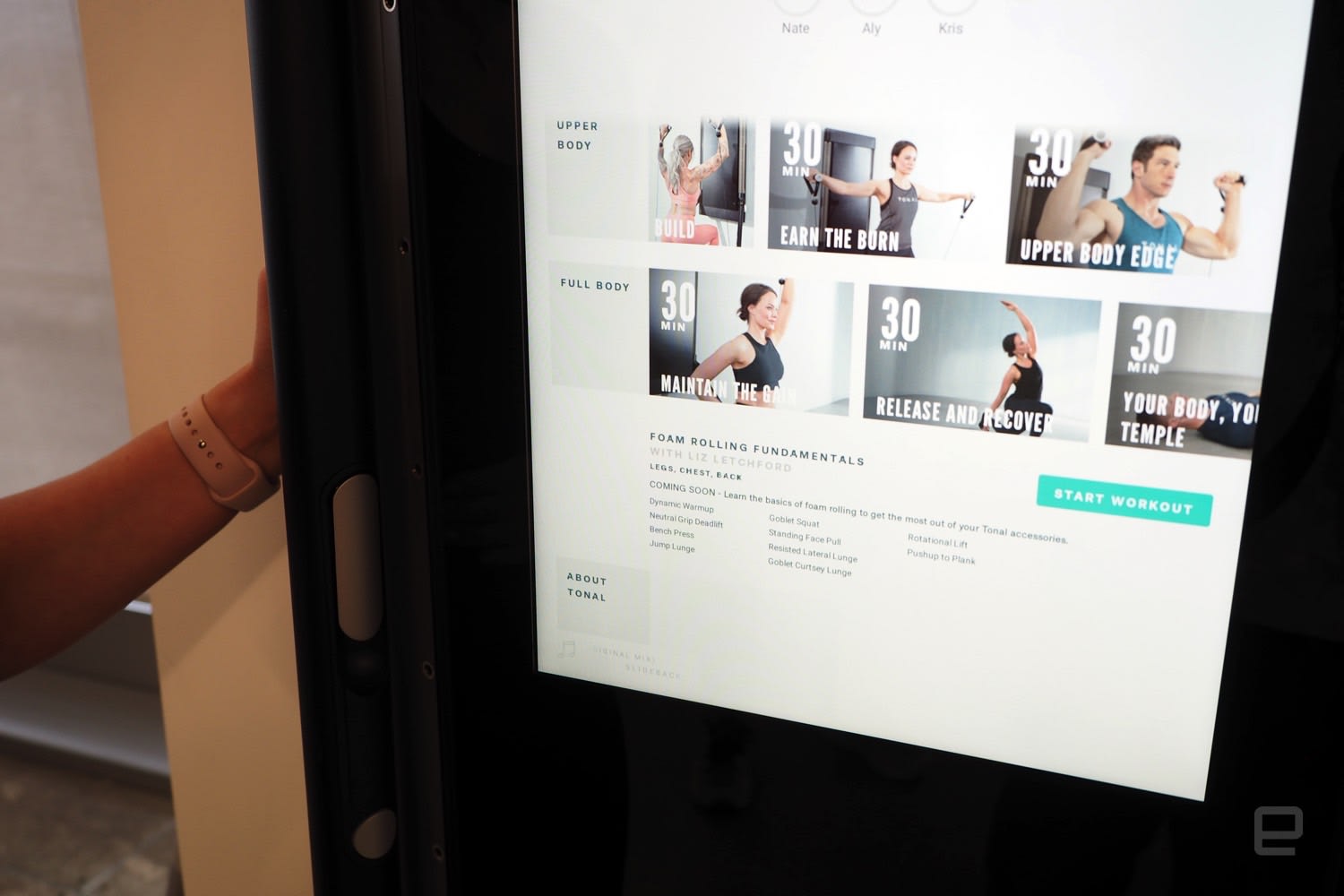 And they definitely want you coming back, because Tonal's programs are subscription-based, similar to Peloton's business model for its spin bikes and treadmills. You'll pay $2,995 for the system itself and then $49 per month for the service. Obviously this means a consistent revenue stream for Tonal, but it could have its advantages for users, too: All that content means you're more likely to find something that works for you.

Right now, Tonal is still rather light on programming, but it has potential. The company has plans not just to expand its content, but to send you your data as well. In particular, Tonal hopes to connect its services to fitness apps like Fitbit. And yes, there's an API for developers who want to hook their apps into the system. Tonal also wants to add programs that accommodate various events in your life, like injury and hopefully pregnancy.

They have some time to work on it, at least: Tonal is only available in the San Francisco area right now, with a showroom and delivery service that includes white-glove installation for $250. A nationwide launch is planned for next year, though, at which point we'll see if there's a market for the "Peloton of weight lifting."