Why are Long Island City residents upset about Amazon HQ2?

When Amazon announced it would build its secondary headquarters in Long Island City, NY, the benefits seemed clear. Amazon will be able to more easily tap into the country's media capital; The campus will be easily accessible by three major airports. Oh, and New York's state government will give the company over $1.5 billion in grants and tax incentives to set up shop in Long Island City, Queens. While that's not the most lucrative deal state governments have offered Amazon, it certainly didn't hurt. For Amazon, the move into New York is smart business.

The locals who gathered to protest yesterday at Gordon Triangle, a sliver of green within spitting distance of Amazon's future home, saw things a little differently. Many of them have called the area home for decades, and as the ramifications of Amazon's plans become better understood, they have come to see the company's plans as a herald of change, very little of it worth celebrating.

And to be clear, not all of the problems these residents foresee are purely because of Amazon. Instead, it's a mix of Amazon's unyielding ambition, New York's inability to get a better deal and a touch of governmental incompetence for good measure. 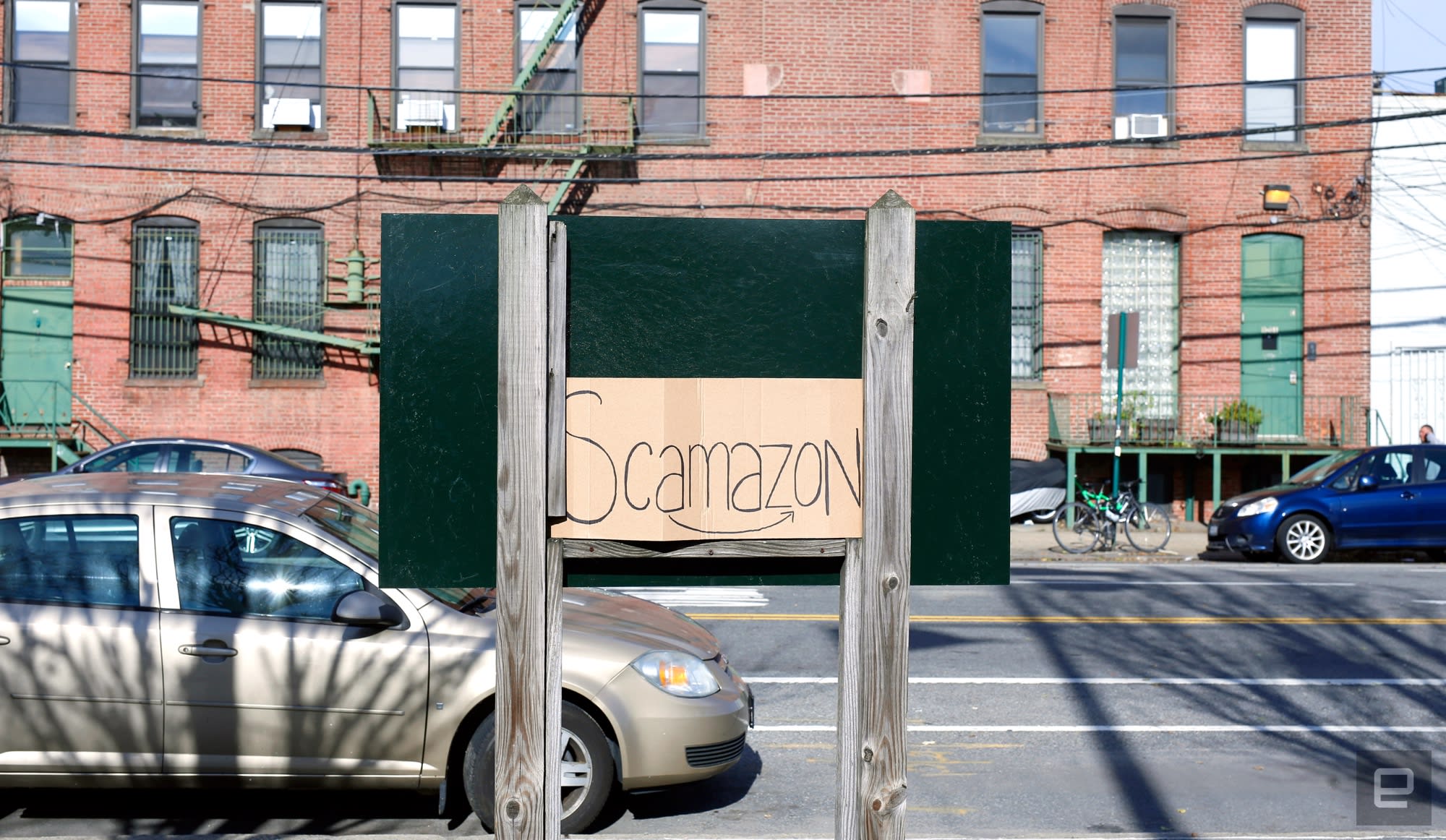 Clad in a bright yellow shirt and gesturing next to a display of frowny Amazon boxes, it was impossible to miss Ray Normandeau, a 74-year old retiree and Long Island City resident since 1973. Having spent much of his life in the Queensbridge Houses development, Normandeau has seen his share of big companies move in next door — think JetBlue, Citigroup and MetLife, to name a few.

If "Queensbridge Houses" sounds familiar, it might be because it's the largest public-housing complex in the United States. And as those titans of industry moved in, Normandeau said he didn't know a single Queensbridge resident they hired. As the New York Post pointed out recently, Amazon's move-in deal doesn't include any provisions for preferential hiring of NYCHA tenants, so the trend Normandeau spotted might continue for a while yet. Then again, Amazon eventually plans to put 25,000 employees in place at its Long Island City campus so it stands to reason the company will tap some locals to help flesh out the support services for these professionals. Even so, there was a distinct sense among protestors that Amazon's staff, flush with cash and itching for luxury, will displace the long-time residents that have built their lives in Long Island City.

Diane Hendry, 58, came bundled almost head-to-toe in warm violet fuzz, but her festive attire did little to lighten her spirits. After digging into Amazon's plans for Long Island City, she said she was struck by how little positive impact the move would have on the lives of people who have made the area home. And even now, she's trying to figure out if she and her husband will be able to stay in the home where they've lived for the past 28 years. 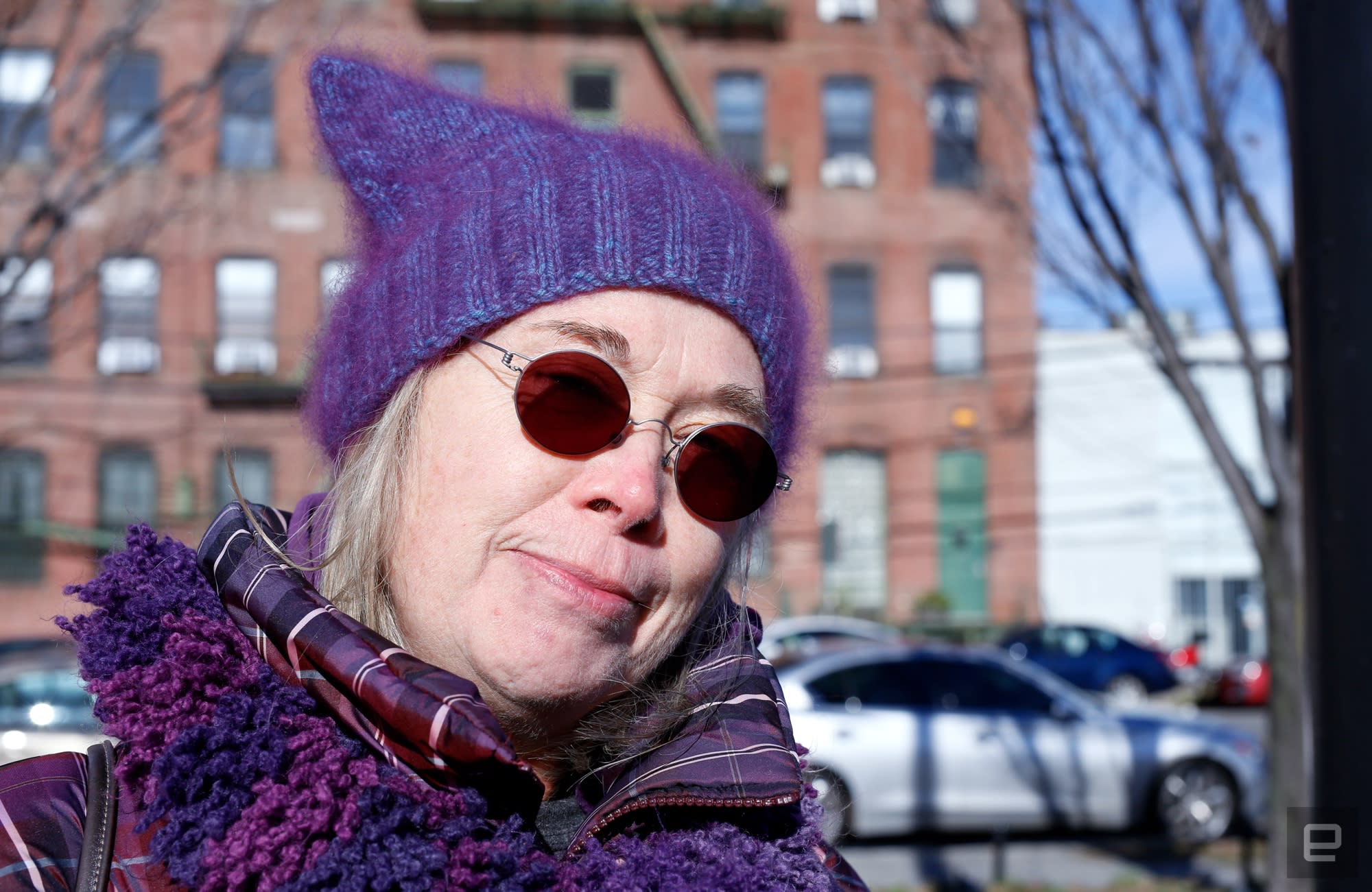 "Amazon will be bringing in people from outside," she told me. "It won't be for the people at Queensbridge. My husband is going to lose his business space because of this. And we may not be forced to move, but our taxes are going to go up to the point where I'm not sure we can stay."

While Hendry may leave LIC in time, she's still concerned about what she would leave behind. More than anything, she's upset the New York City government has been willing to play ball with Amazon while Long Island City's infrastructure continues to crumble.

"We're seeing sewage in day care centers, in community homes," she added. "The price tag from DCP [New York's Department of City Planning] to fix Long Island City's infrastructure is $2.5 to $3 billion dollars. We just got $180 million — that's just a drop in the bucket. I don't think we're going to see Jeff Bezos say 'let's pay to fix it.'"

Well, I can report there was at least one person with a "Welcome, Amazon" sign at the protest in Long Island City. pic.twitter.com/PCGtck5YXS

Not everyone gathered in the triangle came to denounce the e-commerce giant. Jim Dillon, 69, has lived in Long Island City since he was a child, and when he heard about the rally, he scribbled "Welcome Amazon!" on the back of the poster and joined protestors to offer his side of the story.

"Frankly, most of these people are upper-middle-class people," Dillon said of those assembled. "They have nice jobs. They don't know that there are plenty of working-class people still in the neighborhood, people who would be very happy with a security guard job or a janitor's job for $40,000 a year."

Dillon was also skeptical of Amazon opponents' subway argument. They claim that the subway is in dire condition as-is and that the city government was irresponsible for allowing a situation that would see additional strain placed on this failing system. Dillon, meanwhile, points out that traffic flows from outlying boroughs into the heart of the city morning — as such, affluent Amazonians who move to Manhattan will be able to get to Queens without dramatically overloading the existing subway system. With all that said though, Dillon still believes that Bill DiBlasio and Andrew Cuomo — NYC's mayor and the state's governor, respectively — "gave away the store" in its negotiations with Amazon.

It will be years before Amazon's plans to make a slice of Long Island City its own will come to fruition, and only time will tell whether these concerned residents were right to be afraid. For now, at least, local leaders remain cautiously hopeful that the right kind of pressure could make Amazon better citizens of Long Island City. Jimmy Van Bramer, New York City Council member for the district that will eventually house Amazon, urged people to write letters and pressure lawmakers to take a tougher stand on Amazon's ambitions. With any luck, he said, there will enough "sunlight shined onto this deal" that "it could collapse under the weight of everyone watching."