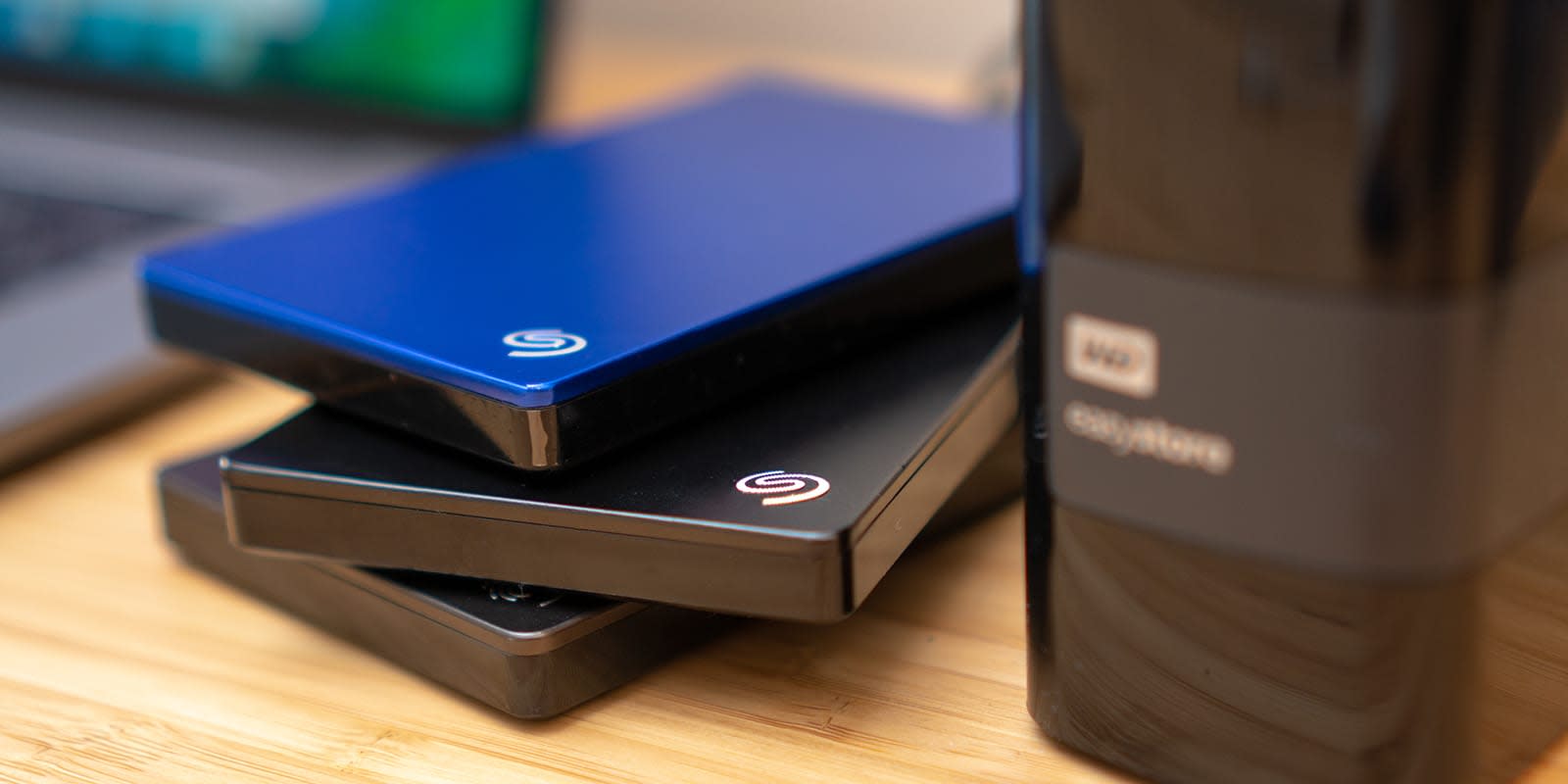 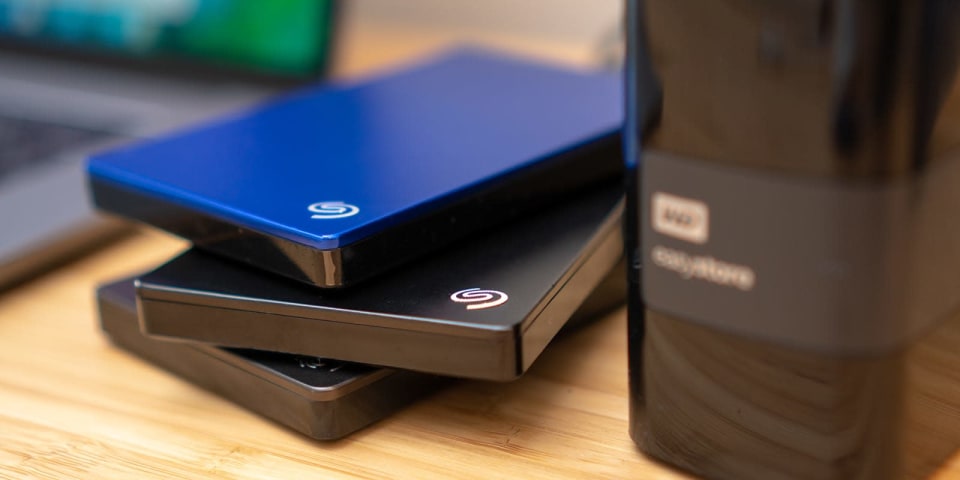 We've spent hundreds of hours researching and testing external drives to find the best options for any use and budget. If you want a dependable external drive that has plenty of storage space for documents and photos and is easy to take on the go, get the 2 TB Seagate Backup Plus Slim. But we also have recommendations if you want more storage space, if you want something more reliable or even faster, or if you need to regularly move large amounts of data from one computer to another with an external drive.

The most convenient drive for backups: Portable hard drive

Who this is for: People who frequently move between locations and want a hard drive to back up important documents and photos from their laptop.

Why we like it: The 2 TB Seagate Backup Plus Slim is one of the lightest, thinnest hard drives we tested in our guide to the best portable hard drives, and it was consistently faster than the competition in our multi-file music and photo transfer tests. More important, it's reliable—the tried-and-true Slim has been one of our picks for four years, and has an acceptable 9 percent reported failure rate across nearly 2,701 user reviews on Amazon. Seagate includes handy backup software, too. 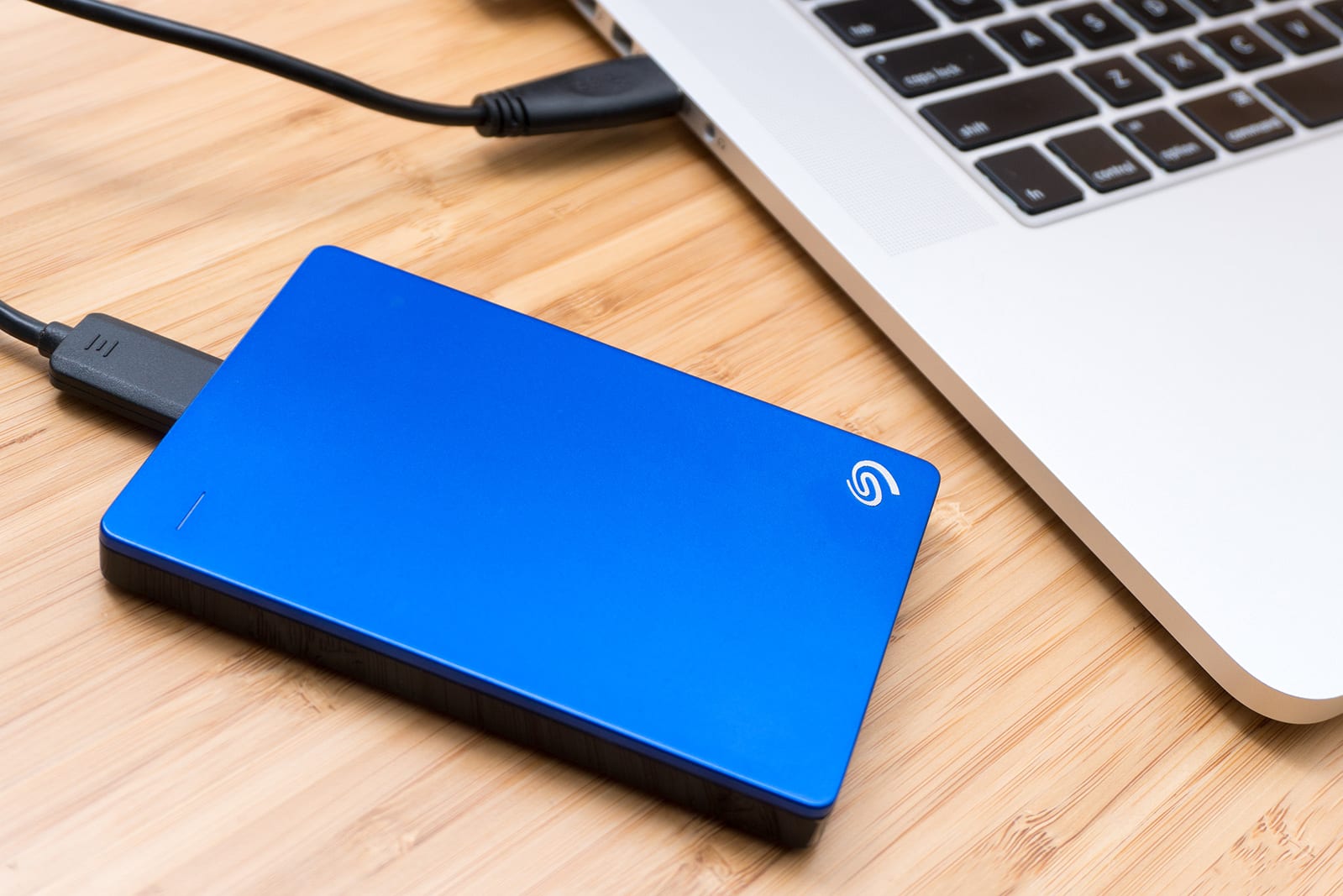 The 2 TB Seagate Backup Plus Slim is reliable and has fast transfer rates. Photo: Kyle Fitzgerald

Flaws but not dealbreakers: The Backup Plus Slim's USB port wobbles when pressure is applied to the cable. If you break the port, you won't be able to access your data until you find a new enclosure. The Slim has a two-year warranty that's a year shorter than that of Western Digital's drives, and we've read some complaints about Seagate's customer service on Amazon, but we don't think either of these issues are dealbreakers.

Learn more in our full guide to the best portable hard drives.

If you spend most of your time at one desk: Desktop hard drive

Who this is for: People who spend most of their time working in one place and want to keep their important documents and photos safe on a higher-capacity, faster, and more cost-effective hard drive.

Why we like it: Western Digital's 4 TB My Book is very reliable—we found it had a 6 percent failure rate across nearly 400 reviews on Amazon—and it offers the best balance of speed and price. It was about as fast as its competition in all of our tests, it's the least expensive drive we tested, and it has a longer warranty (three years) than the other contenders. Plus, 4 TB should be more than enough space for your future storage needs. 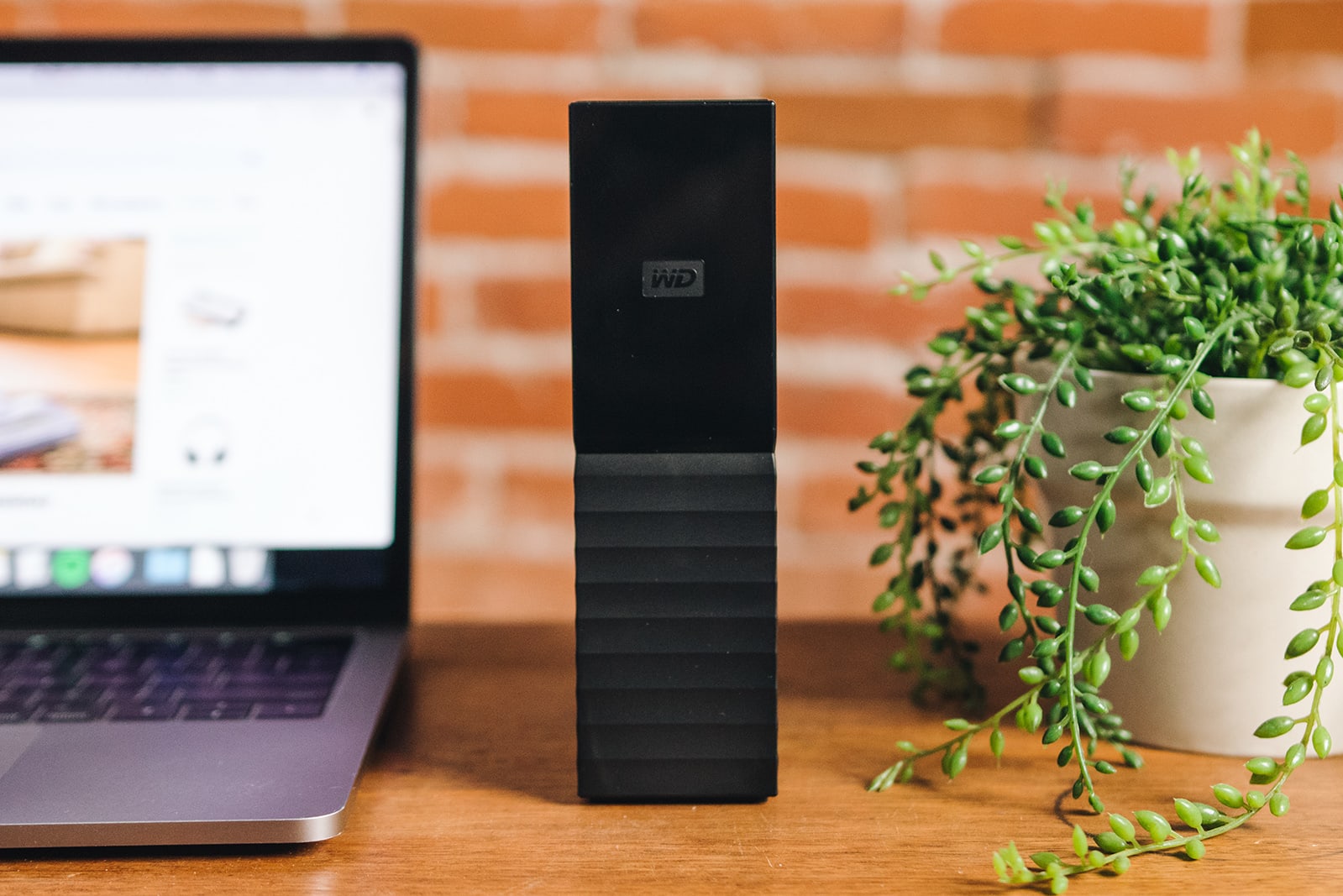 A great external desktop hard drive should be reliable, fast, and inexpensive, like the 4 TB Western Digital My Book. Photo: Rozette Rago

Flaws but not dealbreakers: All of the desktop drives we tested were good, and we found the speed differences between them to be small. Because they perform so similarly, we recommend getting the cheapest desktop hard drive you can find from a trustworthy maker. Right now, that means the 4 TB Western Digital My Book. If you find a drive we've tested that costs less, go for it: WD's Elements and Easystore drives are just as fast and reliable as the My Book, and Toshiba's Canvio drive is another good option if it's on sale.

Learn more in our full guide to the best desktop hard drives.

Who this is for: Photographers, creative professionals, and people who don't mind spending a lot per gigabyte to get a compact 500 GB drive that's between three and five-and-a-half times faster than portable hard drives or desktop hard drives.

Why we like it: The 500 GB Samsung T5 Portable SSD works reliably, and it was consistently faster than other portable SSDs in our tests. The Samsung supports faster, USB 3.1 Gen 2 speeds with a Type-C port, and it includes AES 256-bit hardware encryption to protect your sensitive data. The T5 is about as expensive per gigabyte as other external SSDs, and it's one of the lightest and most compact. It has the most straightforward software to navigate, which makes it a breeze to set up encryption or check for updates. Plus the T5 has an indicator light that lets you know when it's connected. It comes with a three-year warranty. 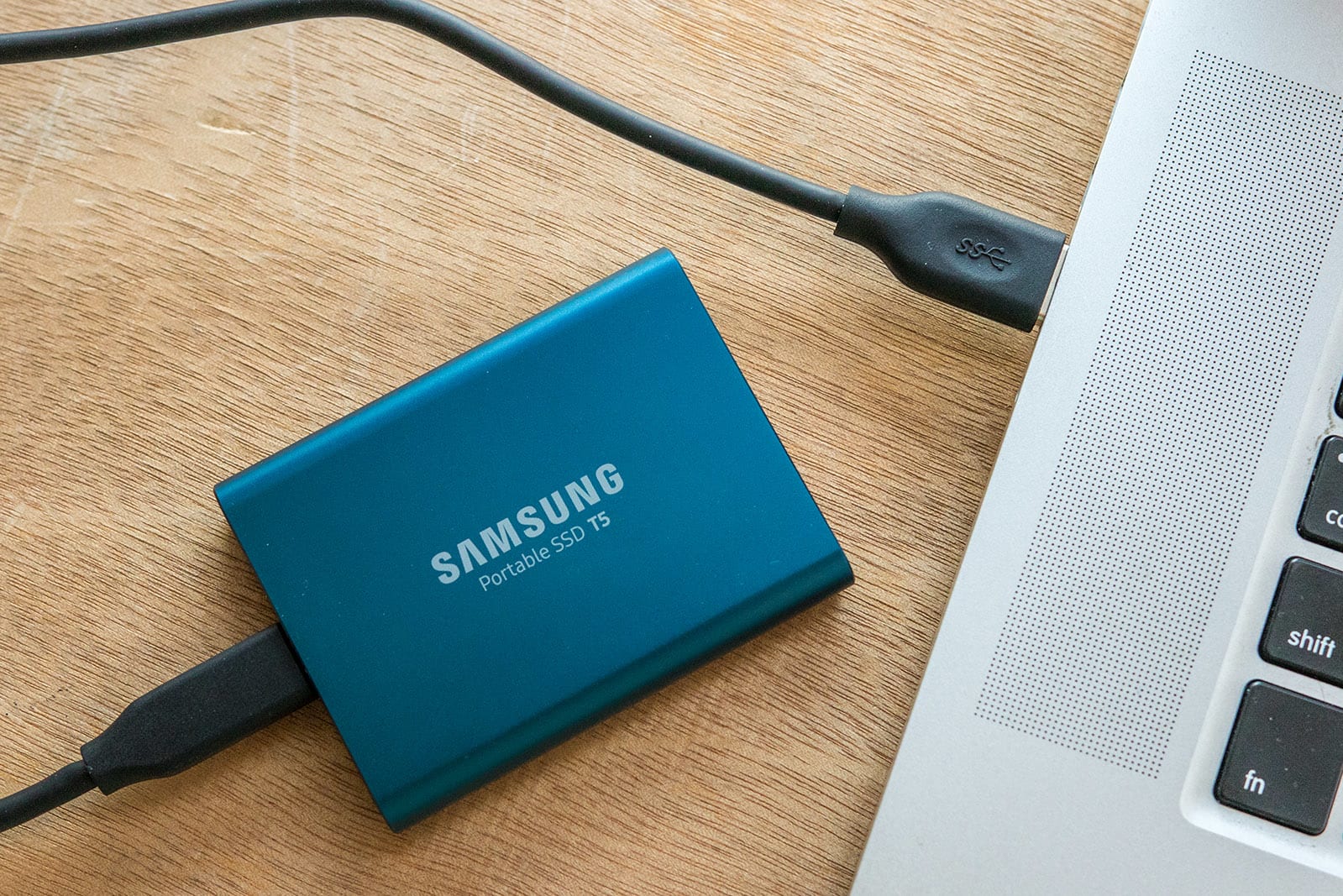 Flaws but not dealbreakers: Compared with hard drives, the Samsung T5 Portable SSD is extremely expensive. But if you're willing to shell out the cash, you're safe doing so because it doesn't have any major flaws.

Learn more in our full guide to the best portable solid-state drives.

If you have a large media library: Network-attached storage (NAS)

Who this is for: Network-attached storage is ideal for people who have large media libraries, because you can store your files in one place and stream them locally to other devices. It's also useful for backing up multiple computers to a single location. You could also use a NAS if you have too much data to store in Dropbox or Google Drive, or if you don't trust your data to a cloud storage provider.

Why we like it: The Synology DiskStation DS218+ is the fastest NAS we tested, and it offers powerful hardware for around $300 (plus the cost of hard drives, around $250 for a pair of 4 TB drives or around $500 for a pair of 8 TB drives). It also includes AES-NI hardware encryption acceleration for added security, has upgradable RAM, and comes with flexible software that's easy to understand and works with a wide variety of third-party apps, such as Plex, BitTorrent Sync, and GitLab. You can use the DS218+ as a home backup device, a media streamer, a mail server, a website-hosting device, a BitTorrent box, or a video-surveillance recorder. 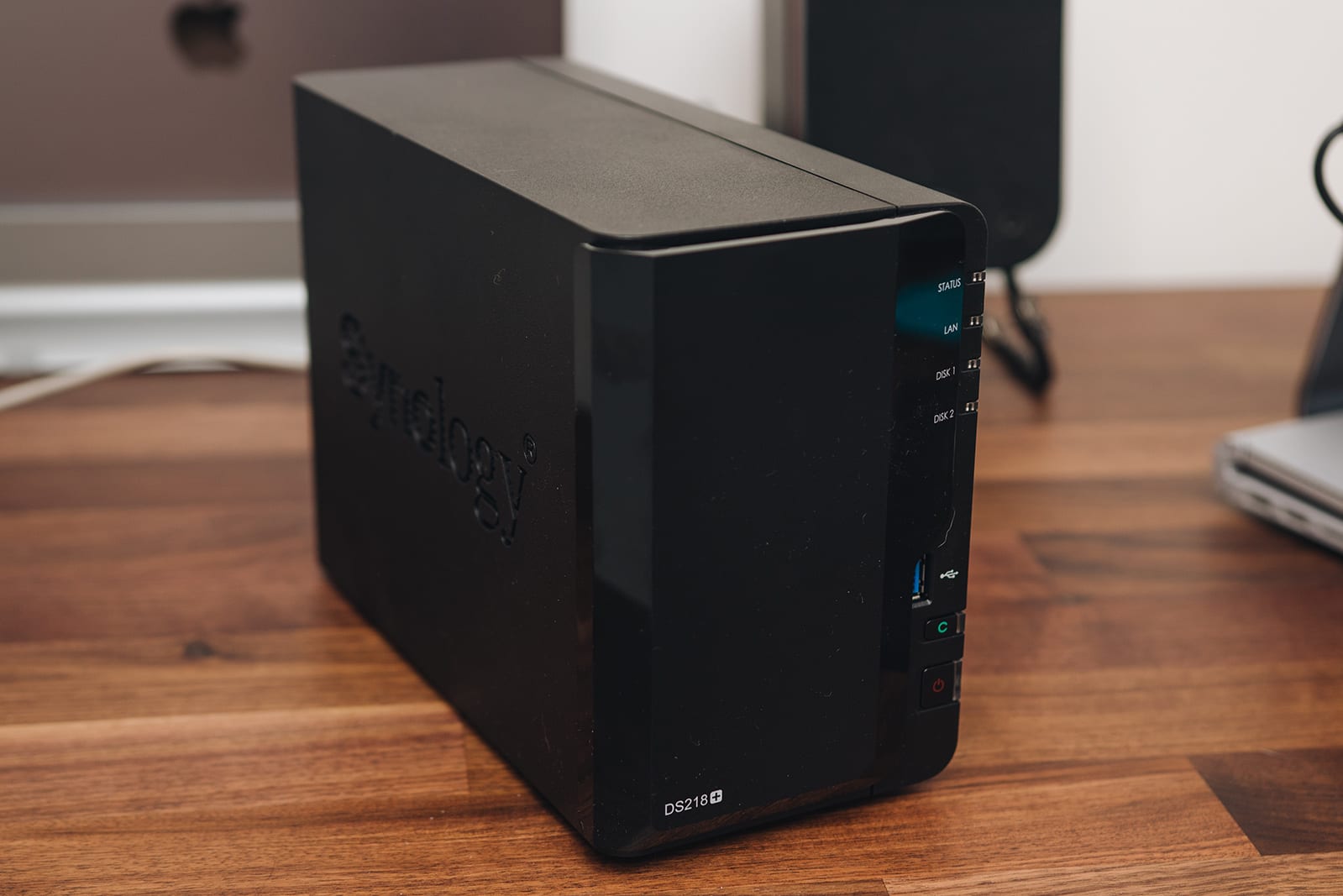 The DS218+ was the fastest, most powerful NAS we tested, with more security than other models, and easy-to-use software. Photo: Kyle Fitzgerald

Flaws but not dealbreakers: A NAS is larger, bulkier, and pricier than other external drives we recommend, and it requires setup and management, as well as a dedicated Ethernet line.

Learn more in our full guide to the best network-attached storage.

If you frequently move data between computers: Flash drive

Who this is for: People who need to quickly move large amounts of data often—large media files like raw photos and video—from one computer to another, without relying on the Internet for convenience, speed, or privacy.

Why we like it: The SanDisk Extreme Go USB 3.1 Flash Drive was the second-fastest flash drive we tested in its price range. (The fastest has been discontinued.) Although the SanDisk's write speeds in benchmarks were lower than we expected, in our actual file-copy tests it outperformed drives with better benchmark results, and it was more consistent in maintaining high transfer rates. The SanDisk Extreme Go comes with a limited lifetime warranty. 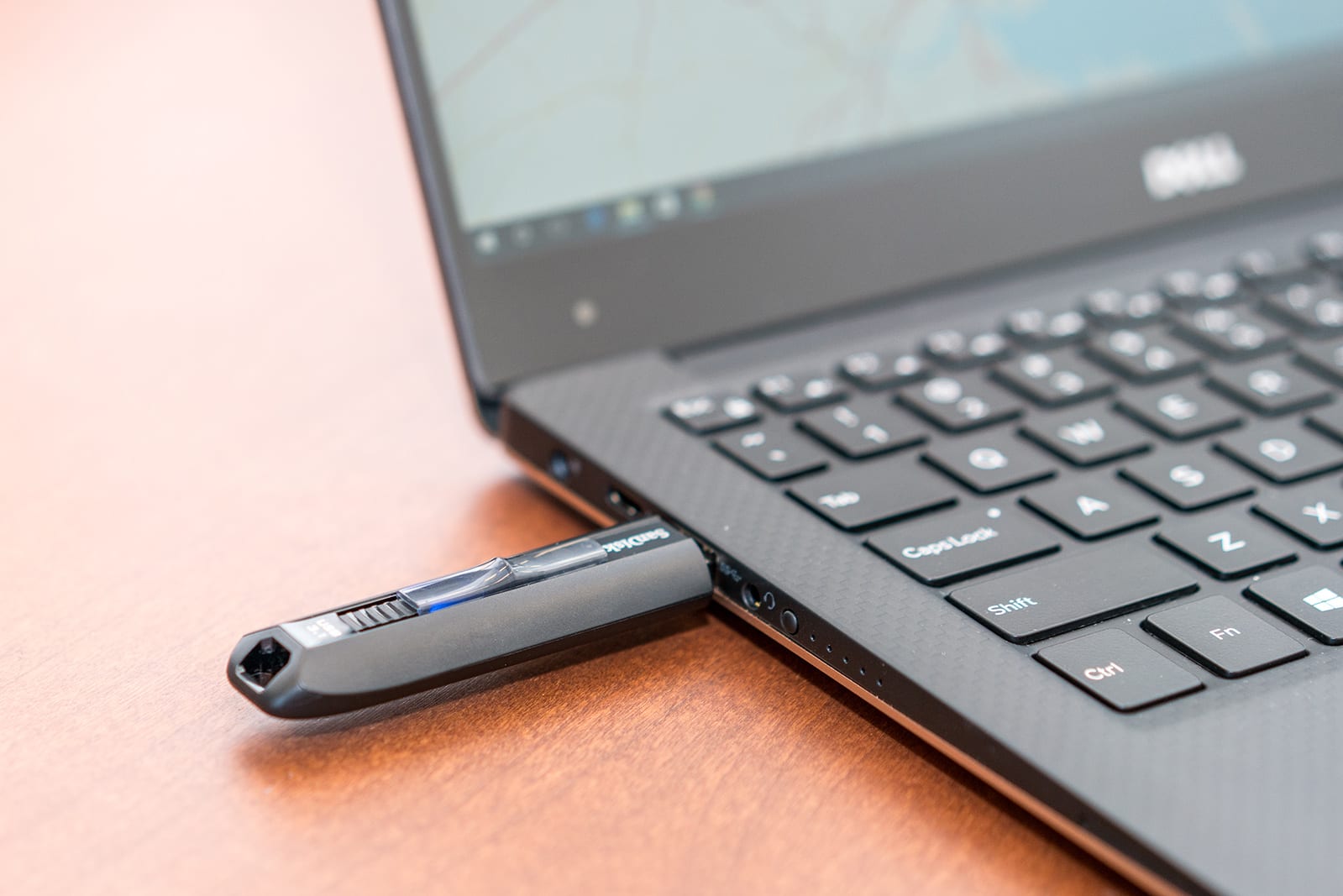 SanDisk's Extreme Go had faster transfer speeds than nearly every drive we tested. It's affordable, too. Photo: Michael Hession

Flaws but not dealbreakers: The 64 GB Extreme Go isn't meant for backing up large file archives like larger-capacity external drives are. Its tiny physical size means it fits nearly everywhere—though its oblong shape means it's a bit snug in closely spaced ports—but it's easier to misplace than other external drives, and more expensive per gigabyte.

Learn more in our full guide to the best flash drives.

If you'd like to learn how to reformat your external drive to work with your operating system of choice, check out our guide.

When was the last time you backed up all of your important documents and photos? Check out our step-by-step guide to backing up your computer for an easy way to get started.

In this article: ExternalHardDrive, gadgetry, gadgets, gear, HardDrive, partner, samsung, sandisk, seagate, syndicated, synology, thewirecutter, wd, westerndigital, wirecutter
All products recommended by Engadget are selected by our editorial team, independent of our parent company. Some of our stories include affiliate links. If you buy something through one of these links, we may earn an affiliate commission.