Amazon may have defined the smart speaker category with the Echo and its successors, but many competitors have the company beat in one specific way: audio quality. Amazon says the No. 1 activity for Echo users is playing music, but anyone who has used an Echo knows that the sound quality is nothing to write home about.

Amazon must have recognized this, because improved speakers in the new Echo Dot and Echo Plus were a major talking point when they were announced in September. Reading between the lines, it seems safe to say that Amazon believes its Echo speakers can be the centerpiece of a respectable home-audio setup. How else would you explain the new $129 Echo Sub, a device that does nothing aside from wirelessly pair with another Echo device to bring the bass?

The good news is that Amazon largely succeeded in what it set out to do. I tried the new Echo Dot ($50) and Echo Plus ($150), both in single-speaker and the new stereo configurations, both with and without the Echo Sub. In every case, I found myself surprised at the quality of the audio I heard: There's no question these are the best speakers Amazon has made for music playback. But there are a lot of different ways to configure all these speakers, and they hit a variety of price points. So hang tight here as I break down what you get for your money and how these new Echo speakers stack up against options like the Sonos One, Google Home Max and Apple HomePod. 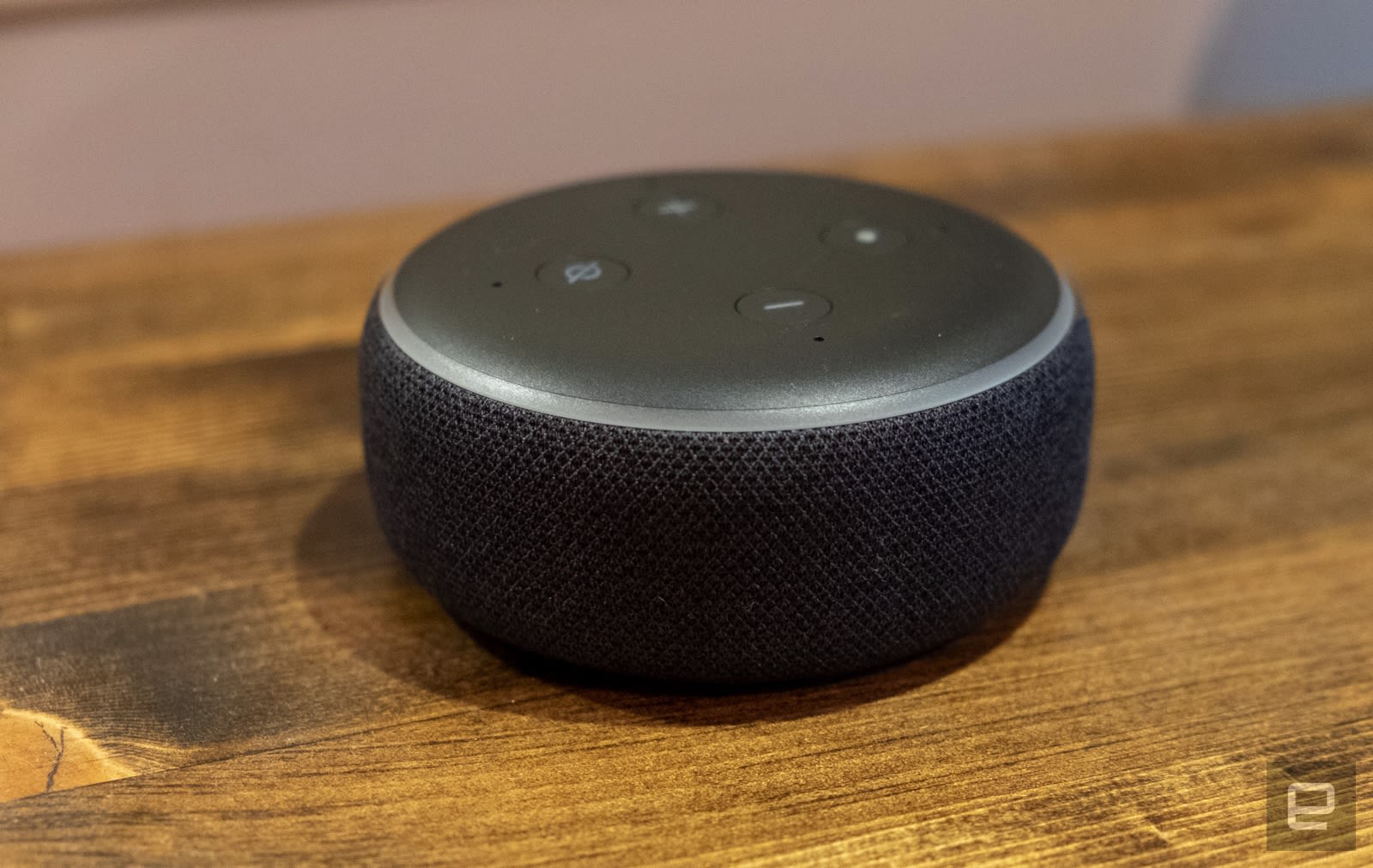 The cheapest and smallest Echo speaker on the market is the Echo Dot -- and while the original model was a fantastic gateway drug into the Alexa world, it sounded tinny, distorted and generally unpleasant. But this year, Amazon made the device slightly bigger and redesigned the internal speaker. Suddenly, the Dot became a viable option for playing music in your bedroom or other small space. It still doesn't have the power to compete with bigger speakers like the Echo Plus or Sonos One, but the lack of distortion when compared to the earlier model makes a huge difference. It's also significantly louder than the original, and the new 1.6-inch driver does indeed bring out some semblance of bass.

Even more surprising was how good two Dots sound in stereo. Setup through the Alexa app on my phone was pretty simple. The app recognized that I had two Dots active on my network, asked me to pick which one was the right channel and finished the pairing automatically. And if you want to separate the speakers, all you have to do is press one prompt to split them back up.

The stereo pair adds more volume, of course, but even more impressive is the increase in clarity. My usual mix of guitar-driven albums (think Soundgarden, Death Cab for Cutie, Cursive) sounded quite nice, as did the latest albums from synth-heavy indie pop musicians like Chvrches, Mø and Now, Now. The intricate details found in string-heavy film scores like Howard Shore's Lord of the Rings got lost a bit, but overall the Dots provided a solid balance of decent audio quality and volume. 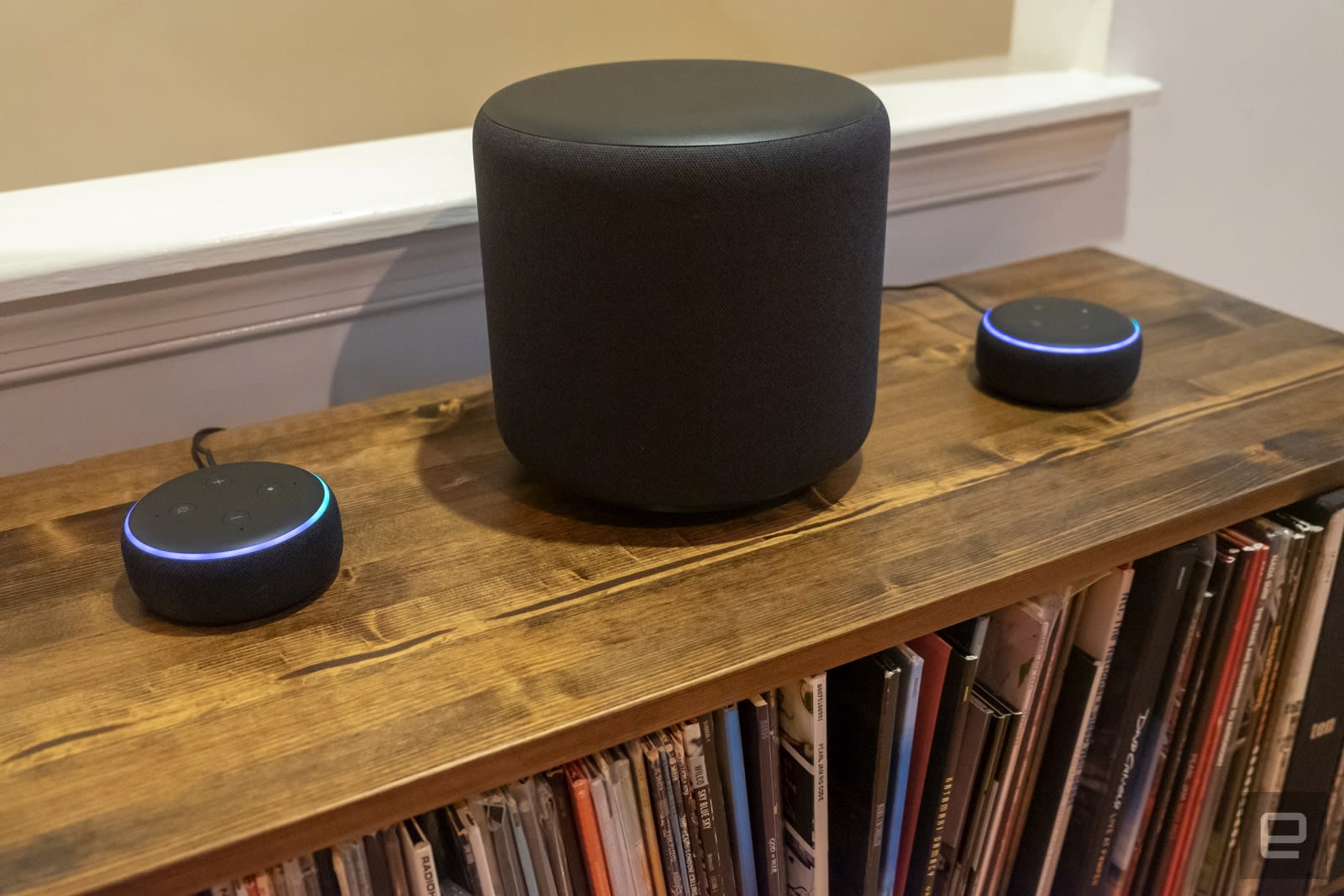 Finally, adding the Sub gave the Dots more space to focus purely on mids and highs -- the Sub was more than powerful enough to take all low-end duties. While there's no doubt that this was the best-sounding combo, I have a hard time imagining anyone spending $229 to buy two Dots and an Echo Sub. Spending $200 on a single Sonos One doesn't offer stereo separation or loud bass, but it's undoubtedly a more balanced and pleasing speaker to listen to. Anyone who wants to go to the trouble of adding a subwoofer or getting a good stereo pair of speakers will almost certainly rule out the Dot. But for everyone else, a single Dot delivers a significantly more pleasant experience than what Amazon was selling a month ago. 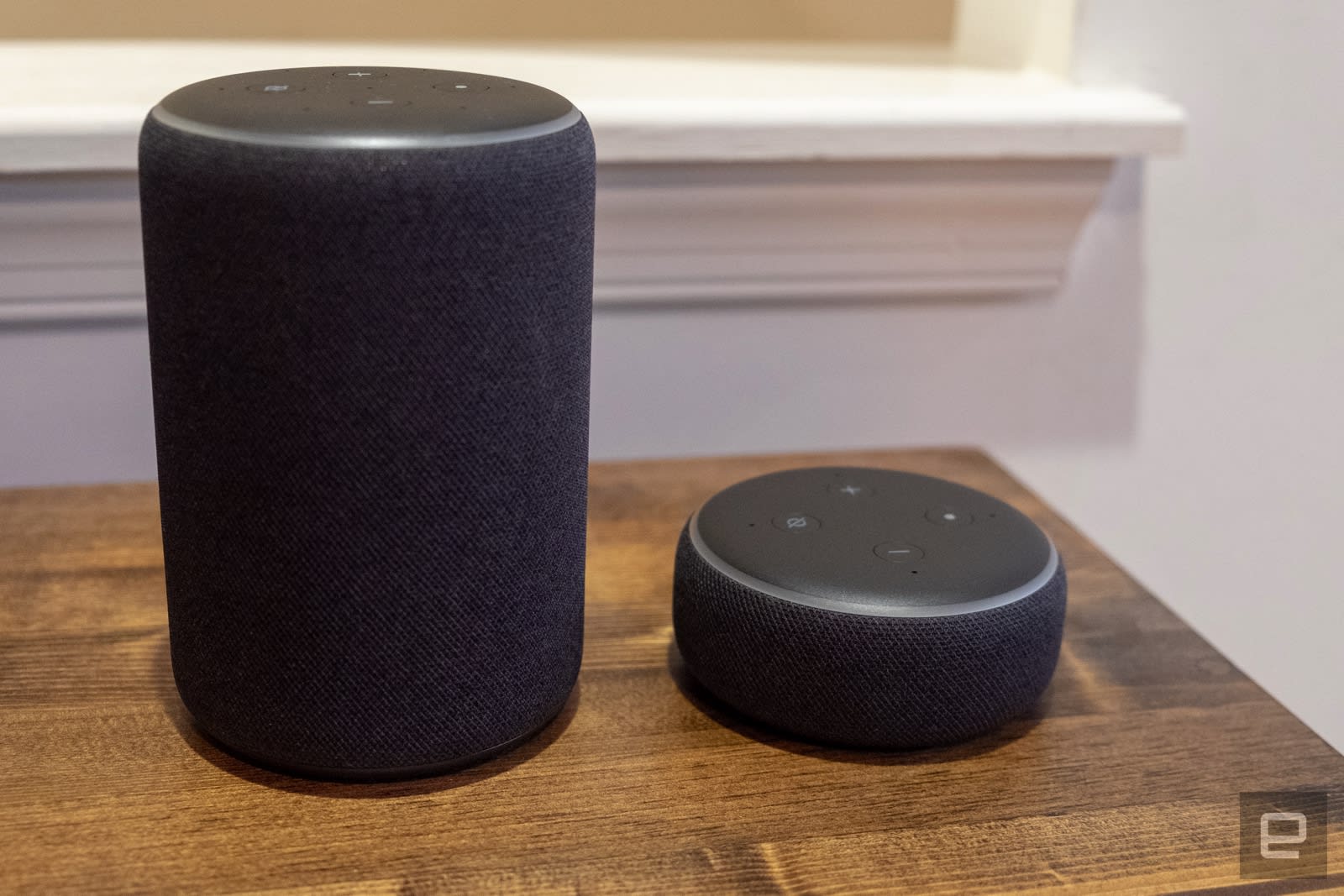 Test #3: Echo Plus, on its own and in stereo

The Echo Plus was another surprise performer. The improvements over older Echo devices are immediately obvious: No longer would I recommend music fans avoid Amazon's speakers. The Plus is far better than the original Google Home as well as any other Echo speaker I've listened to before. Its three-inch woofer delivers prominent bass, especially at higher volumes. I didn't expect to feel bass vibrations on my desk from a relatively compact speaker, but the Plus delivered. Mids and highs were much less muddy than what I heard from both the new Dot and the older Echo Plus. Overall, anyone looking for a smart speaker who wants better audio than you can get from the tiny Dot should give the new Plus a look.

Pairing two Echo Plus speakers together in stereo is an expensive but impressive proposition. I was again taken aback by both the bass performance and overall quality of the experience. In fact, the dual woofers made me wonder if adding the Echo Sub was necessary. Bass heads might disagree, but two Echo Plus speakers provided the oomph I was hoping for as well as additional clarity and stereo separation over the single-speaker setup. While a pair of Sonos One speakers or a single Apple HomePod are probably superior options strictly from a music standpoint, a couple Echo Pluses are a great alternative. Music lovers will find the sound quality to be solid while the built-in smart home hub will be useful for people adding more connected devices to a household.

The grand finale: Two Echo Plus speakers and the Echo Sub 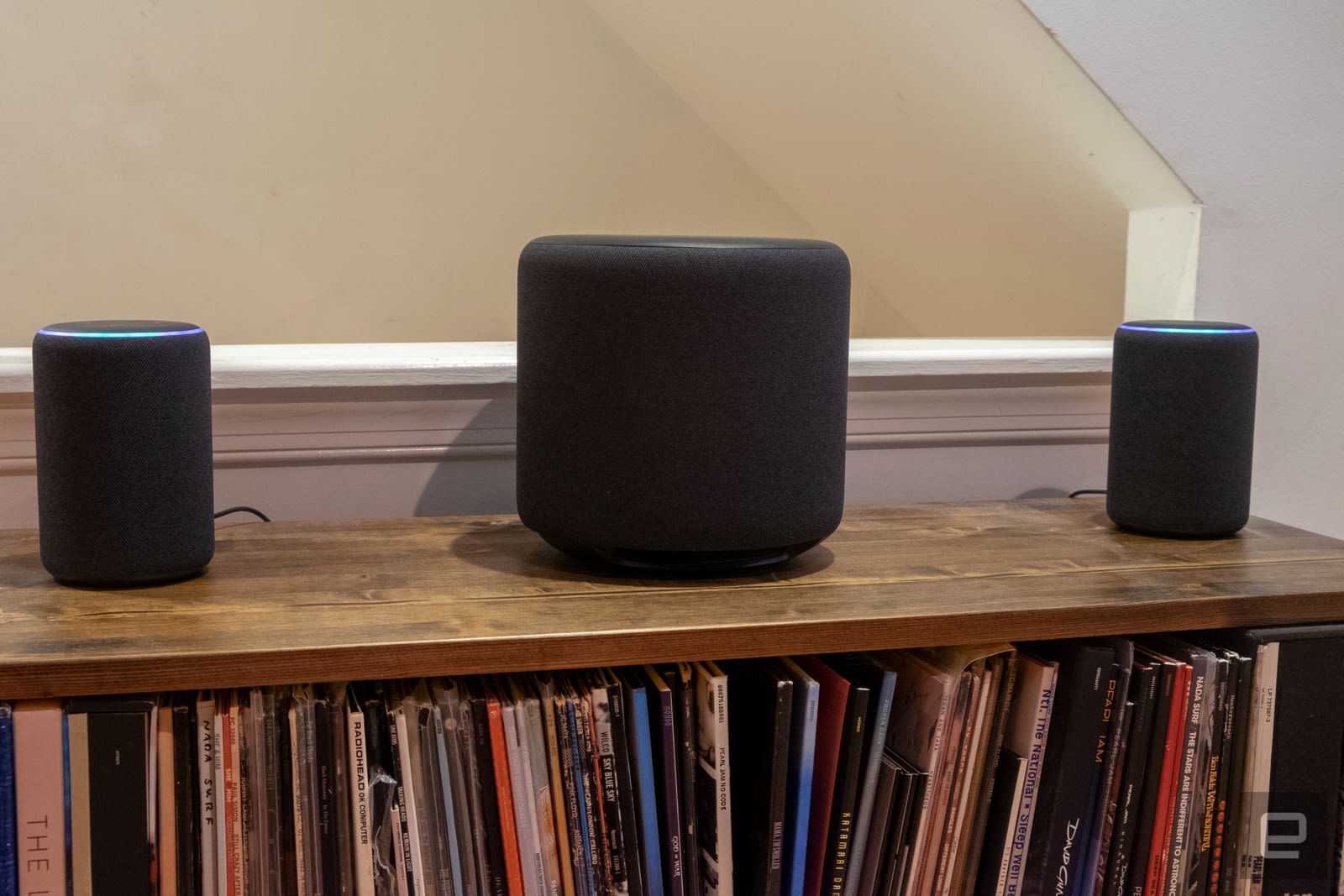 My last step was connecting the Echo Sub to the two Echo Plus speakers I had been testing. This $429 setup is the pinnacle of what you can build with Amazon's own hardware, and while I'm not quite convinced that there's a market for this setup, it does sound pretty great. Again, the Sub lets the two Plus speakers shine in reproducing mids and highs, making the whole sound profile more distinct and less muddy. There's volume to spare and the bass is loud, but everything is well-balanced. It's a high-quality music experience all around, although the Echo Plus still isn't quite as precise as other speakers like the HomePod or Sonos One. 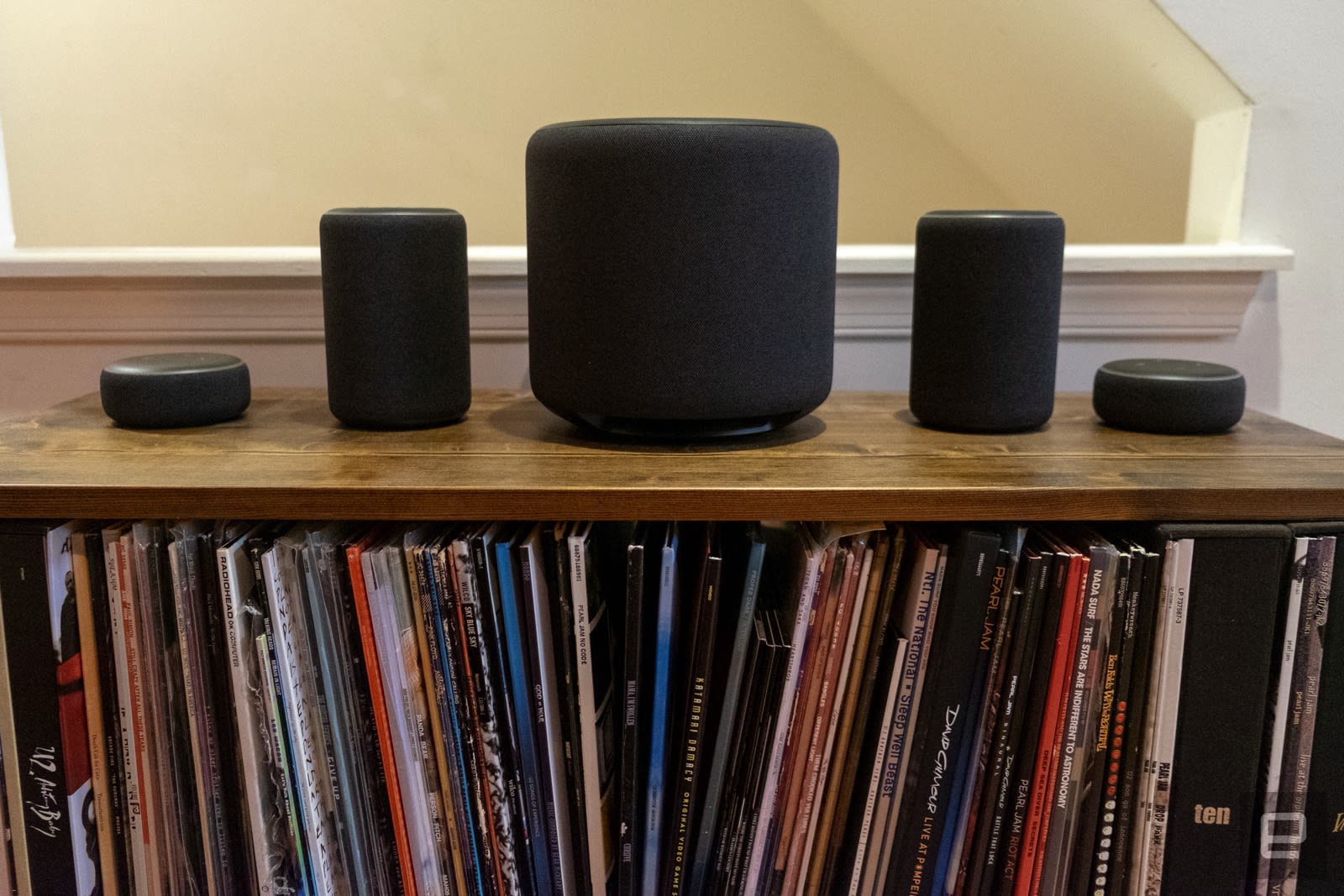 Ultimately, there's no question that the Echo Dot and Echo Plus are going to continue to sell: They're important products for the company, and these new models are dramatic improvements over their predecessors. Fewer people will buy two specifically to pair them in stereo, but there's no reason not to offer that feature. For $100, you could do a lot worse than a pair of Echo Dots, especially because their small size means they can be moved easily.

But I don't imagine many people specifically buying pairs of the Echo Dot or Plus specifically for stereo music. Anyone thinking about that is likely considering better speakers than Amazon sells. This all makes the existence of the Echo Sub even more puzzling. Amazon must have heard from customers that they wanted more bass, but I have a hard time imagining someone plunking down $129 just to add bass to an Echo speaker.

Don't get me wrong: All these new options sound good. The Echo Plus and Echo Dot feature notable improvements and are two of the best smart speakers on the market. The Echo Sub, on the other hand? Don't be surprised if Amazon lets that one quietly fade away.