Expect to see some of this in Vauxhall's 2019 Corsa.

Vauxhall and Opel, the Anglo-German car maker, joins a number of companies suddenly rushing to embrace electrification. As part of a wider shift away from gas-powered vehicles, it has built the GTX, an all-electric concept that serves as a mission statement for its EVs. You won't see this car popping up in showrooms, but this is the shape, broadly, of things to come.

If you're not into cars, then the names might not spring to mind, but both were GM's sub-brands in Great Britain and Europe for a better part of a century. Opel technically owns Vauxhall, but both sell the same vehicles to their respective territories under different names.

In 2017, Vauxhall was the UK's third-biggest car brand, behind Ford and VW, selling 195,137 models across the year. Two of its cars were in the top 10 for the year, with the Corsa selling 52,772 vehicles and the Astra selling 49,370. Both are affordable, sporty and cheap cars ideal for small families and novice drivers.

But popularity does not equate to a glittering reputation amongst the automotive cognoscenti, sadly. When The Grand Tour host Jeremy Clarkson was ordered to review the 2016 Vauxhall Astra, he chose to devote the column to complaining about his busted iPhone.

In early 2017, GM sold the concern to France's Groupe PSA, owner of Peugeot, Citroën and Chrysler Europe. In order to disentangle itself from GM, Vauxhall needs to redevelop all its cars from scratch, though. That's because GM holds the licenses for its existing models, but they'll expire at some point in the future. So, over the next few years, a whole new range of Vauxhalls will emerge, all of which will be available in both gasoline and electric versions. The GTX concept is an SUV, but built on to the chassis of a compact car, so while it has a high ride profile, its footprint is tiny. Measuring in at 13.3 feet (4.06 meters) by 6 feet (1.83 meters), it's built on the same platform that will underpin the 2019 Vauxhall Corsa, coming in both ICE and EV models. Adding to the look are four custom-made 17-inch tires with hubcaps designed to make them look much bigger.

Opel's engineers went all-out with the styling, using a white wraparound for the cabin and a dark-gray hood and roof. That's complemented by a neon yellow flash that you can spot along the roofline and around the wheels. Open the coach-style doors and you'll find there's no central pillar to support the roof; all the better to show off the wrapover windshield.

Preferably without bumping your head on the sharply-angled windshield, you'll be presented with the cockpit. The design has clearly drawn subconscious cues from Knight Rider's KITT and is a swing away from, say, the single screen in Tesla's Model 3. Here, the screens stretch from behind the wheel and around the driver to form a continuous control scheme called the Pure Panel.

The right-hand side of the screen will enable you to control the GTX's (intentionally minimal) in-car infotainment system, full-screen navigation and climate controls. When you've found your destination, you'll be able to then follow along in the GTX's heads-up display. One amusing touch is the low-res webcam embedded in the display, which is connected to a dash-mounted Quink printer. A couple of presses and a snapshot will shoot out the bottom of the dashboard for... some reason.

In place of wing-mirrors, the GTX has two (LG-made) LCD displays connected to cameras that pop out from the edge of the hood. The displays are mounted on the edges of the dashboard to match our instinct to look over when planning a turn. Expect to see more companies adopting this technology -- Audi already has them on the E-Tron SUV -- in the near future. No wing mirrors reduces drag and, perhaps more importantly, makes it easier to park in tighter spaces.

Vauxhall has also gone in hard on the use of LCD displays to cheat little flourishes on the car. On a Rolls Royce, the steering wheel and hubcap insignia remain level due to the inclusion of complex gyroscopic equipment. Here, Vauxhall used little screens to give the look of that (with gentle movement) without any complex engineering. There's also a small LCD battery indicator on the rear driver's-side door to let you know, as you approach the car, how charged it is.

The other big thing that the company is shouting about is the new Visor grille, which will be common across all new Vauxhalls. This five-sided grille will hold the LED headlights, turn signals, the automaker's light-up badge and, where available, the sensors for autonomous driving. Well, kinda -- the company says that it'll focus only on Level 3 self-driving for its production cars.

Inside, you'll spot that the vehicle's four seats are mounted on a single column running through the cabin. The two forward seats are electrically-adjustable, with the driver's seat altering height depending on your eye-level (as seen by a camera on the steering wheel). Nestled between each of the seat backs and headrests is a Bluetooth speaker, which could theoretically be removed for an ersatz rave. 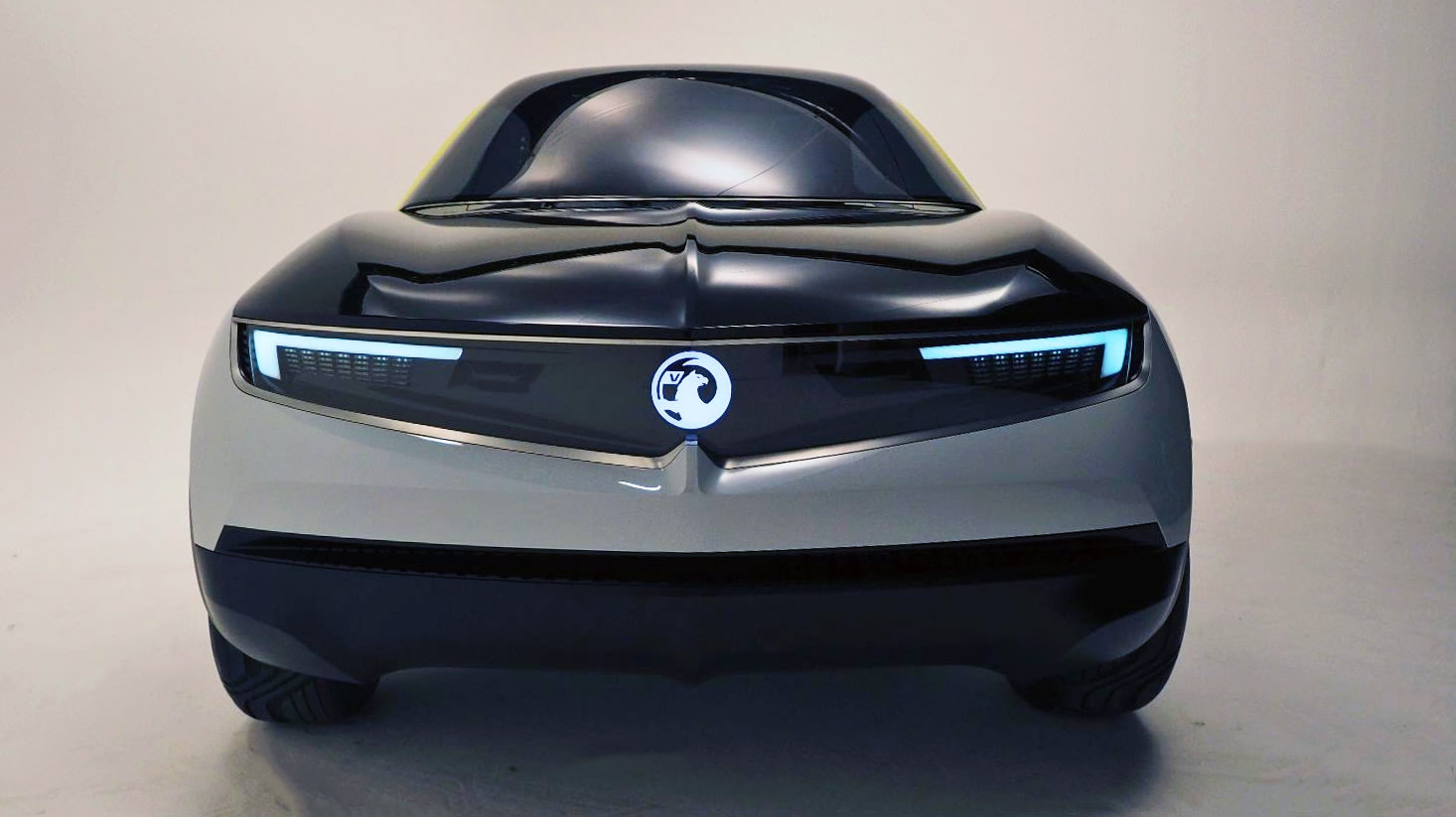 So, how does the GTX handle? I don't know. Sadly, the vehicle stopped accepting a charge and wouldn't move by the time I'd reached Vauxhall's testing location. The company's engineers said that the GTX wouldn't be representative of how Vauxhall's new EVs will drive, anyway. You can make your own jokes about Vauxhall's reputation for reliability in light of the latest surveys.

You can use the GTX's specs and design to guess at how Vauxhall's future electric vehicles will operate. The company included a 50 kWh battery in the GTX, laid out "skateboard style" along the base of the chassis. Weight loss, including shaving plenty of ounces from key components, has also been a big focus for Vauxhall's engineers.

These loose specs suggest the company is aiming for a range of around 200 miles for cars built on the same platform. The 2018 Nissan Leaf has a 40 kWh battery and has an EPA-rated range of 151 miles. The 2018 Chevy Bolt has a 60 kWh cell and is rated by the EPA for a range of 238 miles.

So, the future of Vauxhall is electricity, efficiency, weight reduction and an embrace of a more futuristic-looking design language. It'll be interesting to see how many of these concepts trickle down into its production models. And that will all start with next year's Corsa.

All products recommended by Engadget are selected by our editorial team, independent of our parent company. Some of our stories include affiliate links. If you buy something through one of these links, we may earn an affiliate commission. All prices are correct at the time of publishing.
View All Comments
Vauxhall's GTX concept teases the future of mass-market EVs