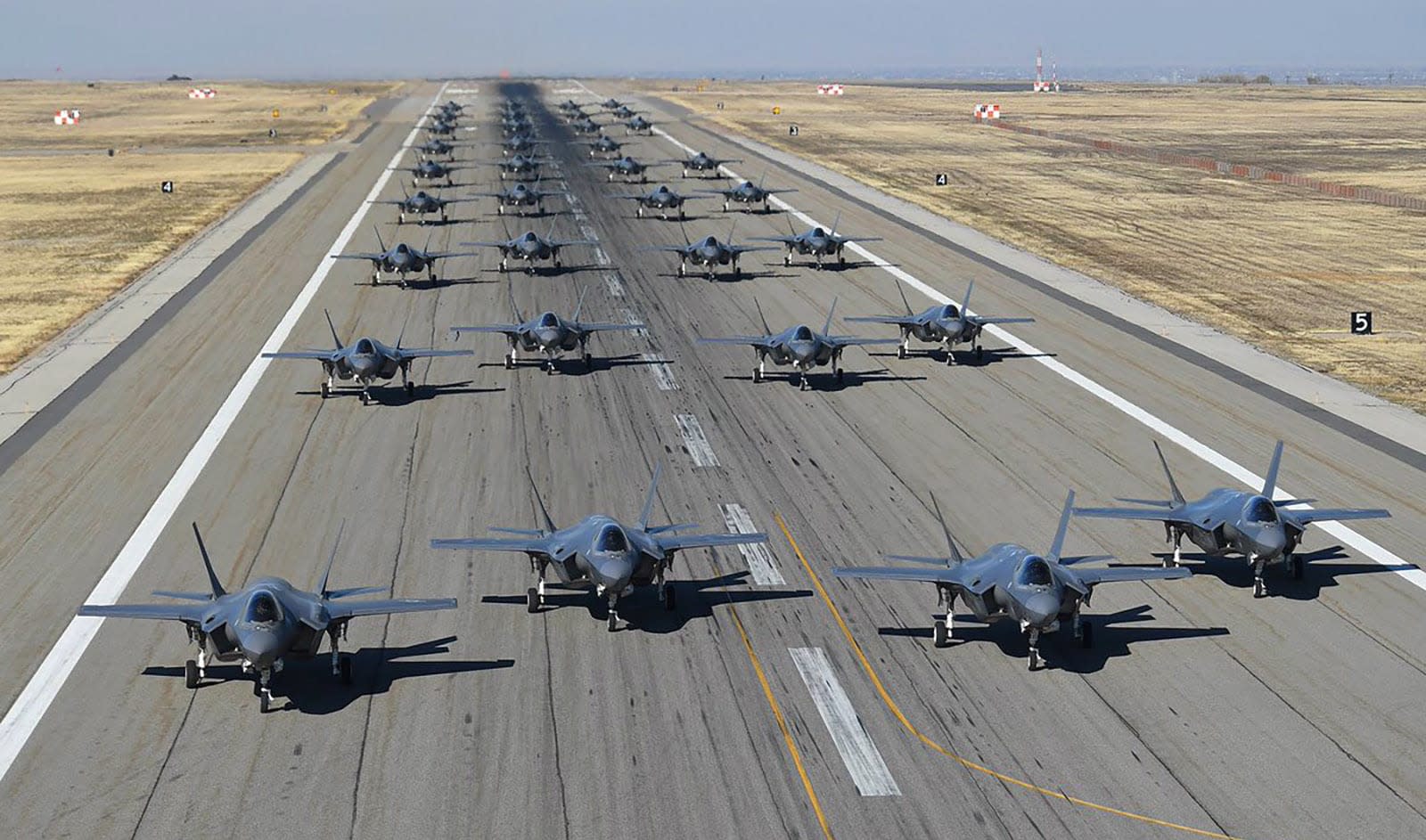 After years of cost overruns and criticism, the US military has started to deploy its stealth-enabled F-35 fighter jet. To communicate that message in no uncertain terms, the Air Force's 388th and 419th Fighter Wings carried out combat exercises meant to test the capabilities of their F-35As. The drill started off with an "Elephant Walk" that placed 36 of the jets (one is missing in this photo) on the runway all at once, worth $3 billion, at least at the current $90 million per airplane price.

Apart from creating an intimidating photo, the Air Force wanted to confirm its ability to quickly mass a force against air and ground targets, while showing off the F-35A's lethality. Both are the first combat-ready fighter wings with the jet and need to be able to deploy anywhere in the world at the drop of a hat.

As intimidating as the F-35As look on the ground, it's on another level to see them do a flyby (below). Launching at 20 to 40 second intervals, they flew the planes in multiple formations like flocks of incredibly violent geese, with all 36 airborne in just 11 minutes. "We are ready to fight tonight, and exercising with multiple squadrons of F-35s can demonstrate our ability to defeat potential adversaries wherever they may arise," exercise leader Major Caleb Guthmann told the Standard-Examiner.

We heard you! Here's a courtesy video for those patriots and aviation enthusiasts who just can't wait. Thanks for your support! 💪🏻🇺🇸 @thef35 @388fw pic.twitter.com/uTATVHJVnw

There are three main variants of the F-35, also known as the Lightning II. The Air Force's F-35A is the smallest and lightest (and cheapest) version, and lands conventionally. The F-35B, meanwhile, is the short takeoff and vertical landing (STOVL) model, much like the Hawker Harrier Jump Jet. It can't carry much in the way of fuel or armaments in vertical takeoff mode, so it's generally designed to do short landings. The F-35C is essentially a beefed up, foldable wingtip version of the F-35A designed for the rigors of carrier service.

The jets have been plagued by cost overruns and cancellations by international partners, including Canada. The program's cost is expected to hit $1.5 trillion, a mind-boggling number that generated a lot of criticism. Lockheed took the brunt of that and vowed to cut costs. For instance, it will replace the jet's main processor with one that's a quarter the cost and 25 times faster.

"As production ramps up, and we implement additional cost savings initiatives, we are on track to reduce the cost of the F-35A to $80 million by 2020," said Lockheed F-35 general manager Greg Ulmer earlier this year. "That is equal to or less than legacy aircraft, while providing a major leap in capability."

In this article: ElephantWalk, F35, FighterJet, gear, security, thebigpicture, thenewbigpicture, transportation, USAirForce
All products recommended by Engadget are selected by our editorial team, independent of our parent company. Some of our stories include affiliate links. If you buy something through one of these links, we may earn an affiliate commission.