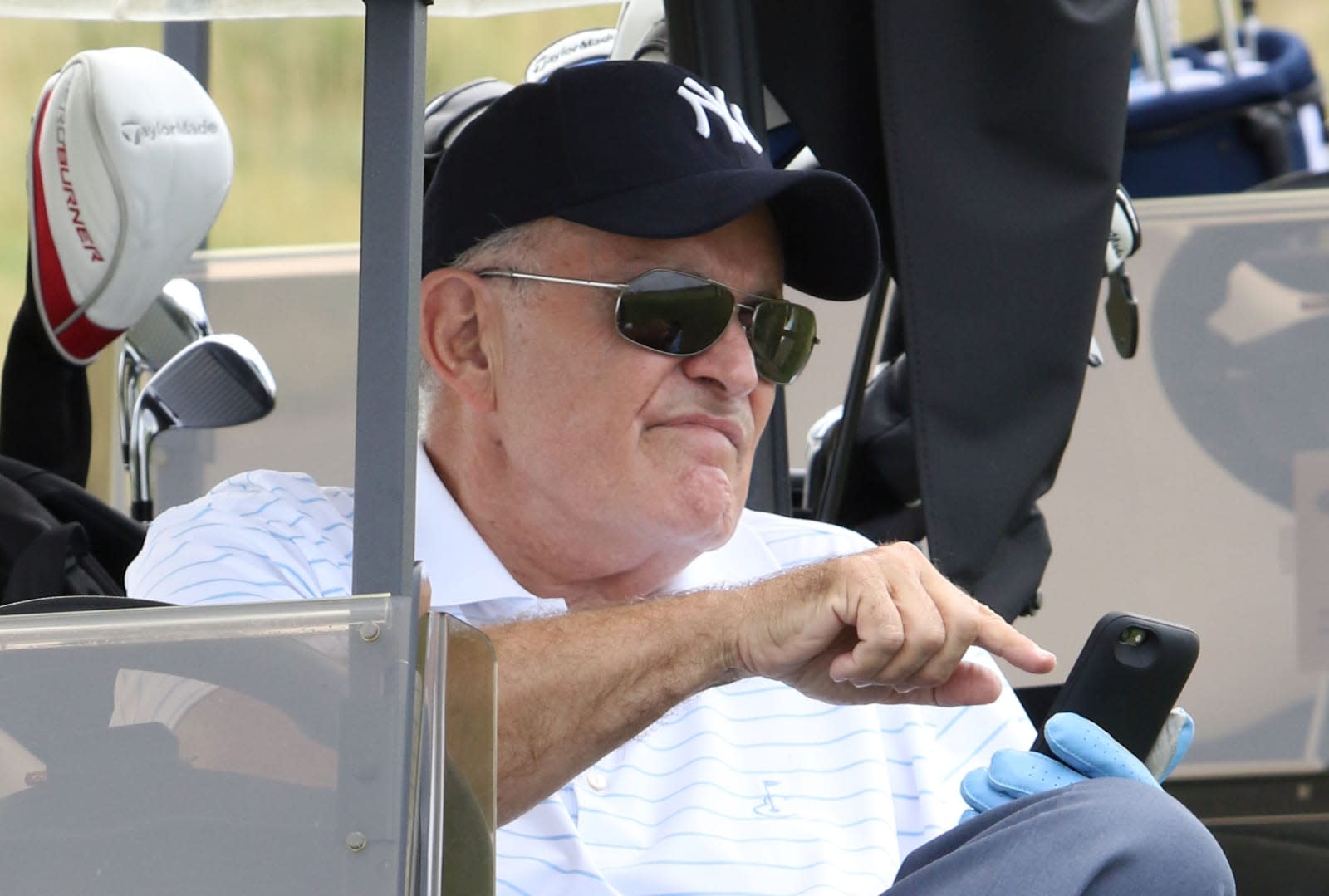 Rudy Giuliani, once Trump's "cyber advisor," has again demonstrated his lack of even the most basic internet knowledge. In part one of a three-act blunder, he tweeted about special counsel Robert Mueller, but left out spaces between the sentences, accidentally creating the random link "G-20.In." (Twitter automatically generates clickable text out of valid links.)

Web designer and comic Jason Velazquez noticed the gaffe and pounced, purchasing the domain and posting a message: "Donald J. Trump is a traitor to our country." He had a limited amount of time to act (needing to go onstage for an improv show) but it took all of 15 minutes, he told the New York Times.

Mueller filed an indictment just as the President left for https://t.co/8ZNrQ6X29a July he indicted the Russians who will never come here just before he left for Helsinki.Either could have been done earlier or later. Out of control!Supervision please?

It could have ended with a good chuckle there, but Giuliani decided to triple-down on the typo. With no facts or justification, he blamed Twitter, saying employees there are "cardcarrying anti-Trumpers." Trump and other Republicans have lodged similar "liberal bias" complaints against the site before, so Giuliani was echoing his boss.

To bolster his argument, Giuliani noted that his second "period no space" error ("Helsinki.Either") didn't generate a link. Unfortunately, that showed he wasn't aware that there are a limited number of top-level internet domains and that while "In" (for India) is one of them, "Either" isn't. In any case, a Twitter spokesperson said that it can't edit user's tweets, and "the accusation that we're artificially injecting something into a tweet is completely false."

Twitter allowed someone to invade my text with a disgusting anti-President message. The same thing-period no space-occurred later and it didn't happen. Don't tell me they are not committed cardcarrying anti-Trumpers. Time Magazine also may fit that description. FAIRNESS PLEASE

Giuliani has actually made this mistake before. He failed to put a space between "collusion" and "So" in this tweet, so someone bought "collusion.so" and redirected it to Lawfare under the topic "The Russian Connection" (Lawfare itself didn't do this). There, you can find many, many articles about Mueller's Russia investigation and the Trump-related discoveries thereof.

While he now works as a legal advisor to the White House, Trump originally brought Giuliani in as a cybersecurity advisor. He ran a security consulting firm for 16 years, but as many a Twitter jokester noted, clearly wasn't the cyber brains of the operation. One noted that while websites can be technical, "Rudy doesn't even know how spacebars work."

Update 12/5/18 9:37 AM ET: Lawfare's managing editor, Quinta Jurecic, told Engadget that Lawfare itself didn't purchase the domain "collusion.so" that appeared by error in Giuliani's tweet and redirected to its site. "We have no idea who did that and didn't realize it until someone else tweeted about it! (It is funny, though)," she said on Twitter. The post has been updated with the corrected information.

In this article: BiasComplaint, Domain, gear, ignorance, mobile, politics, RudyGuliani, Technology, Trump, Twitter
All products recommended by Engadget are selected by our editorial team, independent of our parent company. Some of our stories include affiliate links. If you buy something through one of these links, we may earn an affiliate commission.