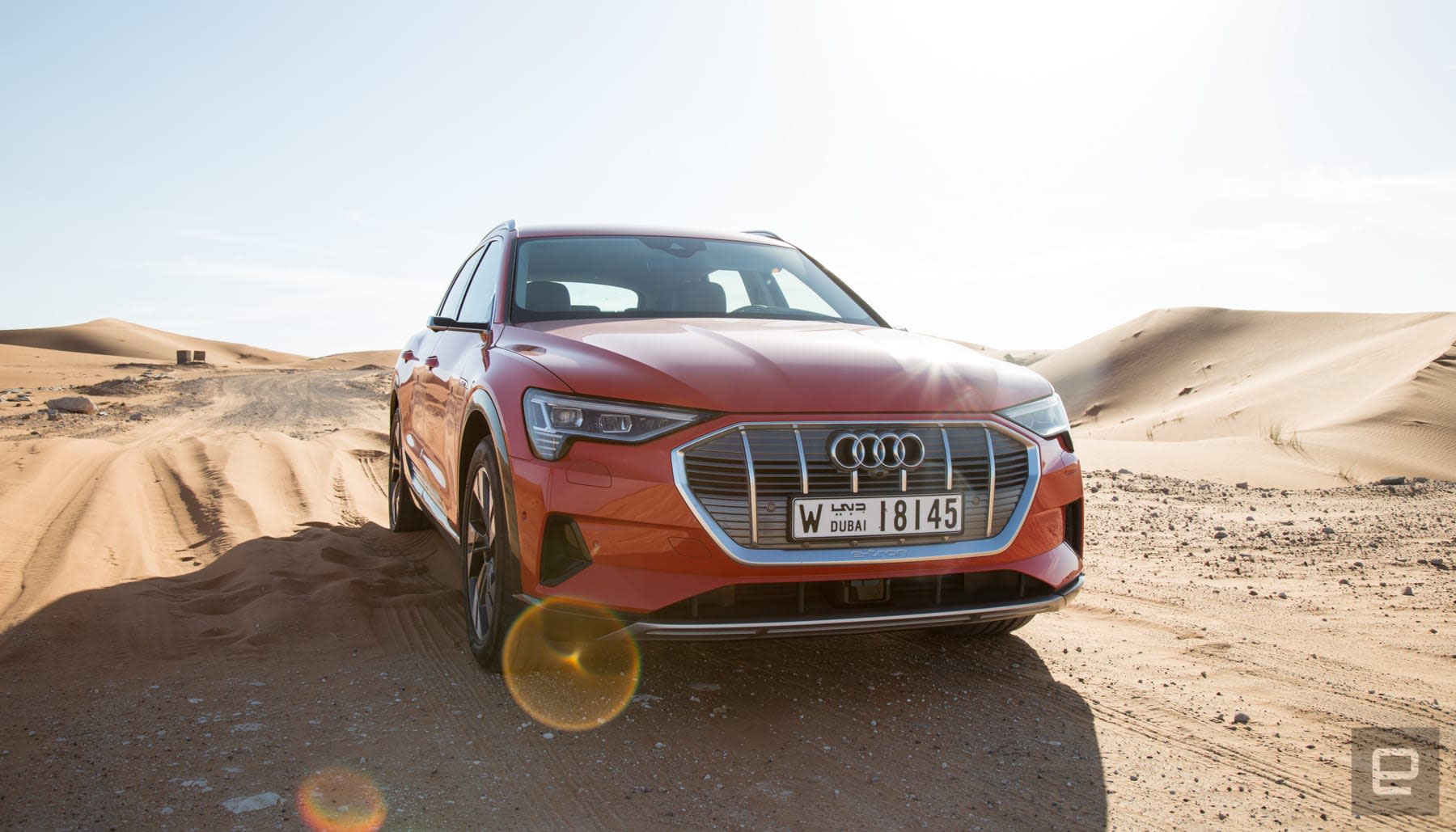 We've already seen the first pure-electric Audi in teaser images, under QR-code camoflauge and even unveiled under a barrage of lights accompanied by a DJ set from Diplo. But no amount of pomp and circumstance, sly marketing or famous DJs matter until you get behind the wheel. Good news then, that I finally had the chance to drive the Audi E-Tron in a barren desert, about as far as you can get from a well-orchestrated launch party.

The Audi E-Tron will land in the second quarter of 2019, in an increasingly crowded electric-SUV segment. But its main competitors will be the Tesla Model X and the Jaguar I-Pace. Both are outstanding vehicles and the German automaker needed to make sure it could compete with those and rival SUVs coming from BMW and Mercedes-Benz. So far, it looks like Audi pulled it off and the E-Tron is a great debut into the EV world for the automaker.

This isn't the first Audi E-Tron though -- the Audi A3 hybrid gets that honor. But that will be the last E-Tron with a gas tank. The new SUV (starting at $74,800) with its two electric motors ups the ante of the E-Tron brand and paves the way for the upcoming E-Tron GT sedan (announced at the LA Auto Show, coming in 2021). While the 2019 E-Tron shouldn't be expected to perform like a sports sedan, it does give us a peek into what we can expect from Audi. 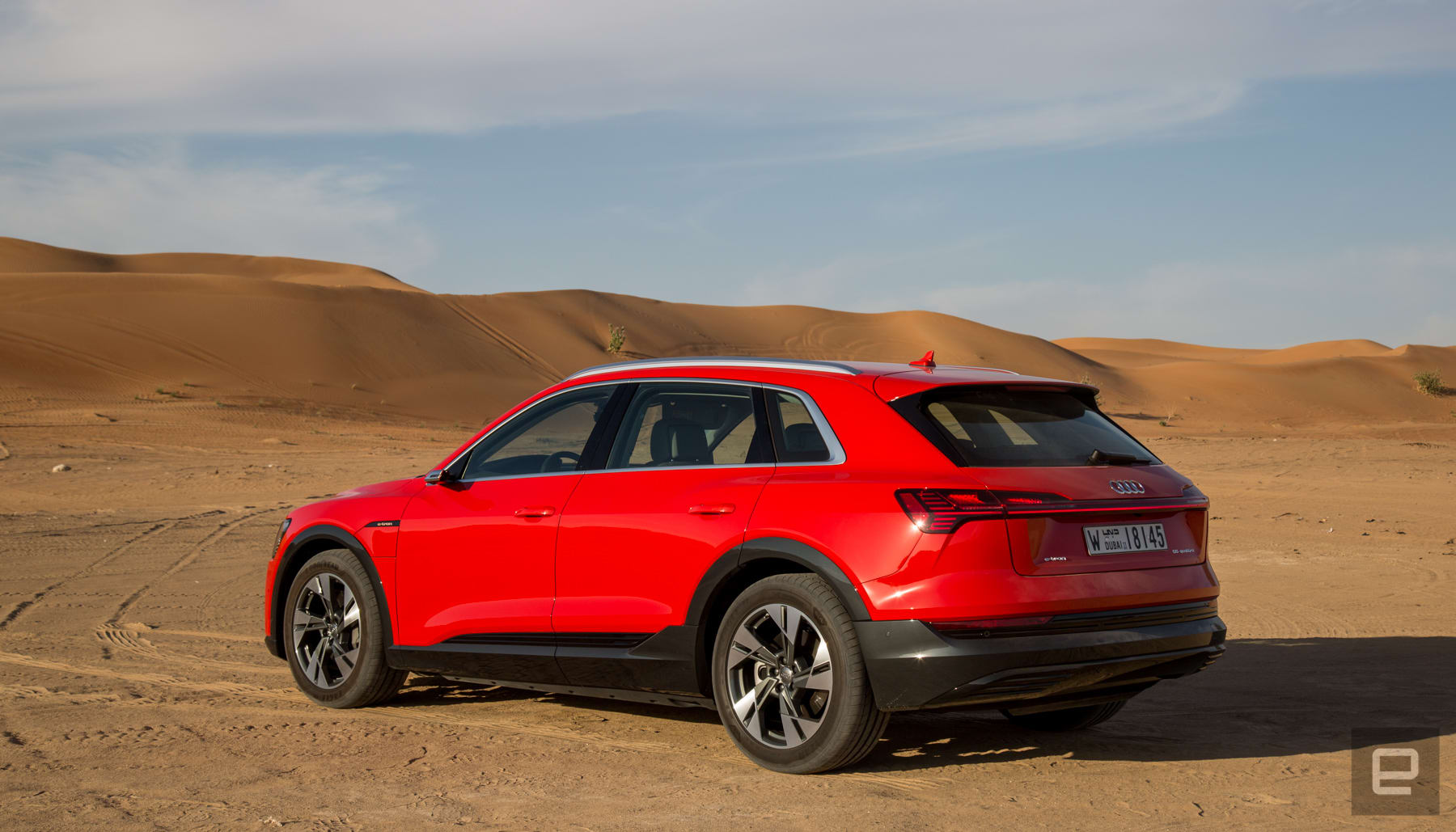 The new E-Tron comes with Audi's all-wheel-drive "Quattro" system, which is powered by two electric motors, which are powered by a 95kWh battery under the floorboard. That array of cells will comes with an eight year/100,000 mile warranty and if any of the modules go bad, Audi says the entire battery setup can be removed and the offending cells can be replaced. That should ease the minds of those concerned about what happens when part of a battery goes south.

That battery pack provides about 400 horsepower and 489.7 foot-pounds of torque. On straightaways and highways, I overtook cars with little effort for an SUV -- Audi says it'll do zero to 60 in 5.5 seconds. The acceleration won't impress your friends that much (especially if they've been in a Tesla), but it's more than adequate for 99.9 percent of your daily driving.

Audi gave me the opportunity to take the vehicle on some dirt roads heavily dusted with desert sand. The Quattro system did a great job making sure I stayed on the road and not get stuck in the loose sand. Audi was quick to point out that it's not a robust offroader but my drive suggests it will be capable enough for most on dirt roads (without too many ruts) or out in the snow. 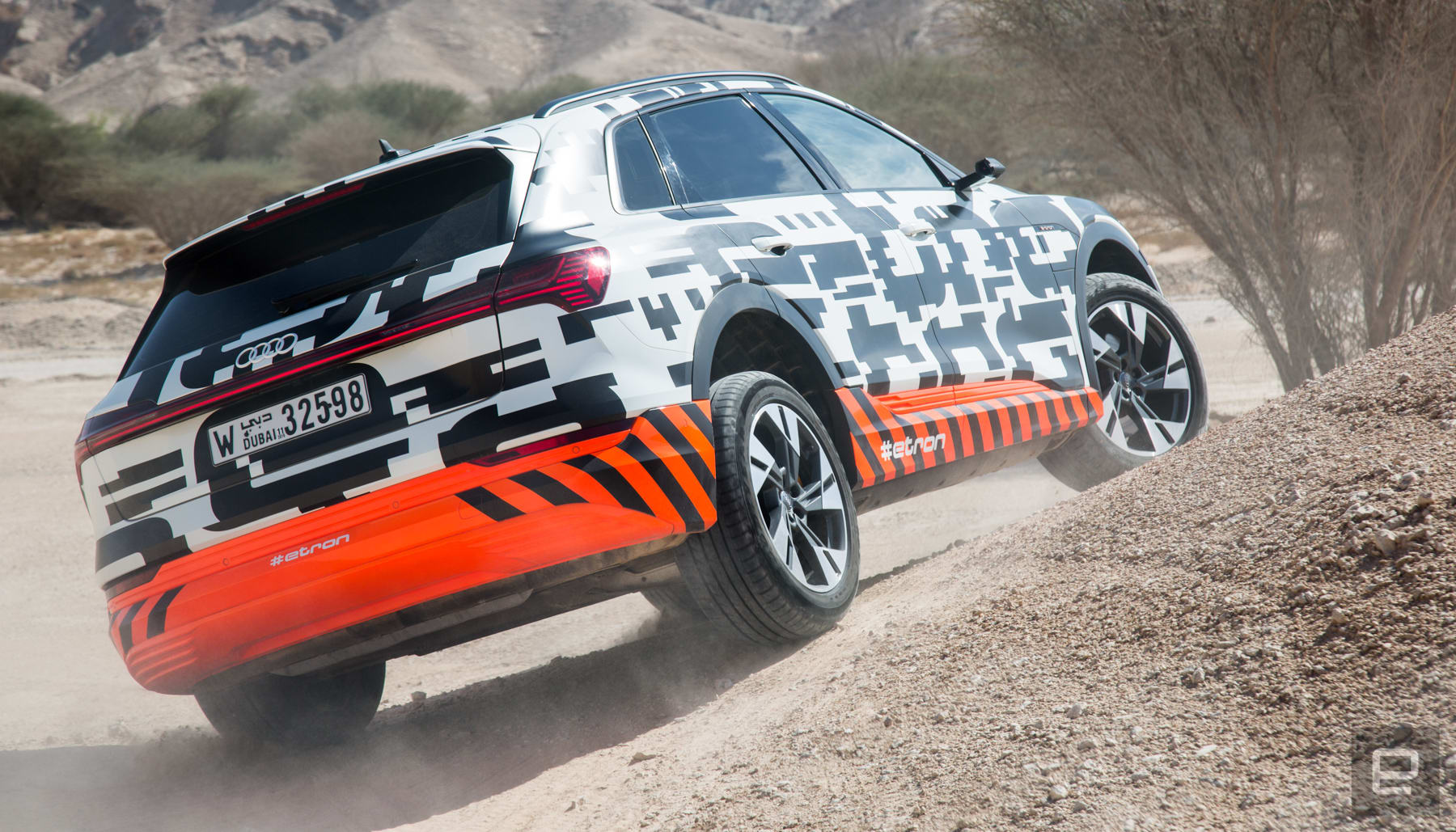 Cornering was fine on dirt and sand roads where ruts and drifts can lead a vehicle to a bad situation pretty quickly. On asphalt, it's more than adequate to make highway on-ramps and measured drives through mountain roads enjoyable. It corners better than the Model X, but not as precisely as Jaguar's I-Pace. That's to say, it'll get you to your chalet during dry and snowy conditions with no problem, just don't expect too much of it while going around actual corners.

There's regenerative braking here, too. Testing it on the mountain roads in the United Arab Emirates, I was impressed by how quickly I could generate battery power -- you can even control the level of regeneration while coasting with the steering paddles. The highest setting was enough to slow me down from a moderate speed to get around a sharper-that-usual corner.

The brakes are the real technological feat here. The first 0.3 G of deceleration (light braking) is handled by the two motors, that then feed that energy to the battery. Anything more than 0.3 Gs and the traditional hydraulic brakes take over. Like most electric vehicles, you can also adjust your driving behavior to extend the range and see real-time results in the display in the dash cluster. 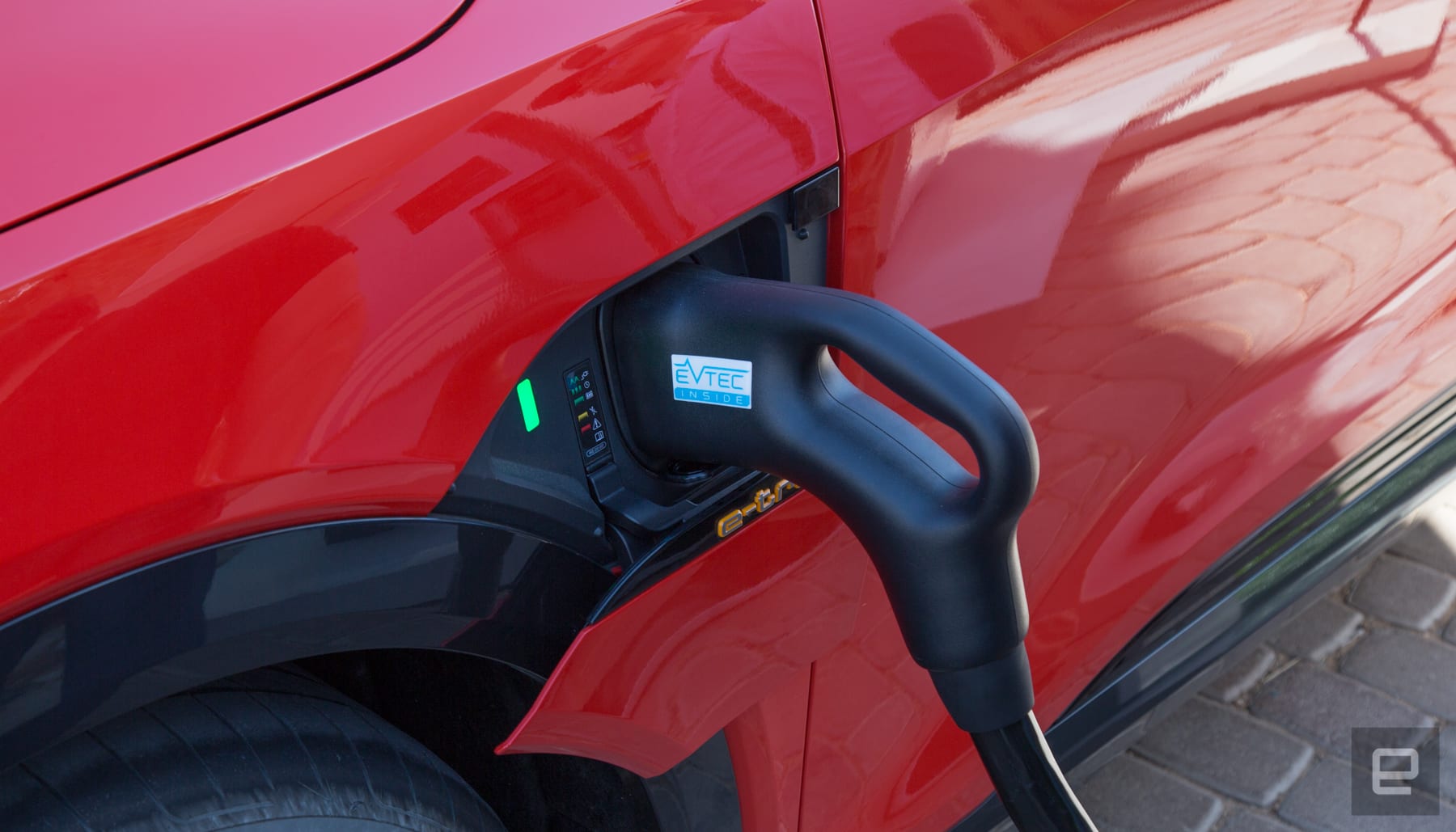 There's also the traditional charging setup. The vehicle ships with a DC fast charger port and can accept up to 150kW of power. Unfortunately, it's tough to quantify that into range per minute of charge. It's fast, but the automaker still needs the EPA to give it a proper rating for the United States. The European WLTP test gives it a range of 248.5 miles but the EPA's more stringent tests should be less than that. That information should be available closer to the release of the car in the United States.

Meanwhile, the in-car tech is powered by Audi's new MMI infotainment system. Like the system found in the A7 and A8, it's a great update and a frustration-free experience. Even the climate controls which use the second display (below the main one) are easy to use and because Audi places the shifter near the system, you're wrist can rest on the housing and you can quickly build up muscle memory to adjust the temperature.

The adaptive cruise control and lane-keep assist are also new and are carried over from the sedan line. I noticed that the centering was a bit tighter on the E-Tron than on the A8, but that may be due to the well-maintained roads around Abu Dhabi. They are far nicer than the roads around Big Sur where I drove the Audi Sedan.

Another small update to the system is the capacitive touch detection that senses if your hands are on the wheel -- a first for Audi. As long as I was touching the wheel, I didn't have to periodically wiggle the steering (to produce a bit of torque the car could register) which is how the system reminds you to put your hands back on the wheel. It's a pleasant upgrade that should please anyone that does a lot of long-distance driving (or is stuck in gridlock on a regular basis).

One feature I thought I'd like more were the side cameras and displays that replace the side mirrors. They're not allowed on US roads, so the chances of people experiencing them here are slim. The side-view displays are situated in the uppermost corner of the front doors just below where you would look with a traditional side-view mirror. To adjust the view angle, the driver's side is a touchscreen that you tap and drag to move the virtual mirror. They're slick but after a day of using them, I'm not really a fan. As with anything new, you have to train your brain to not stare at the tiny cameras attached to the side of the car and instead look down a few inches to see what traffic is doing around you. 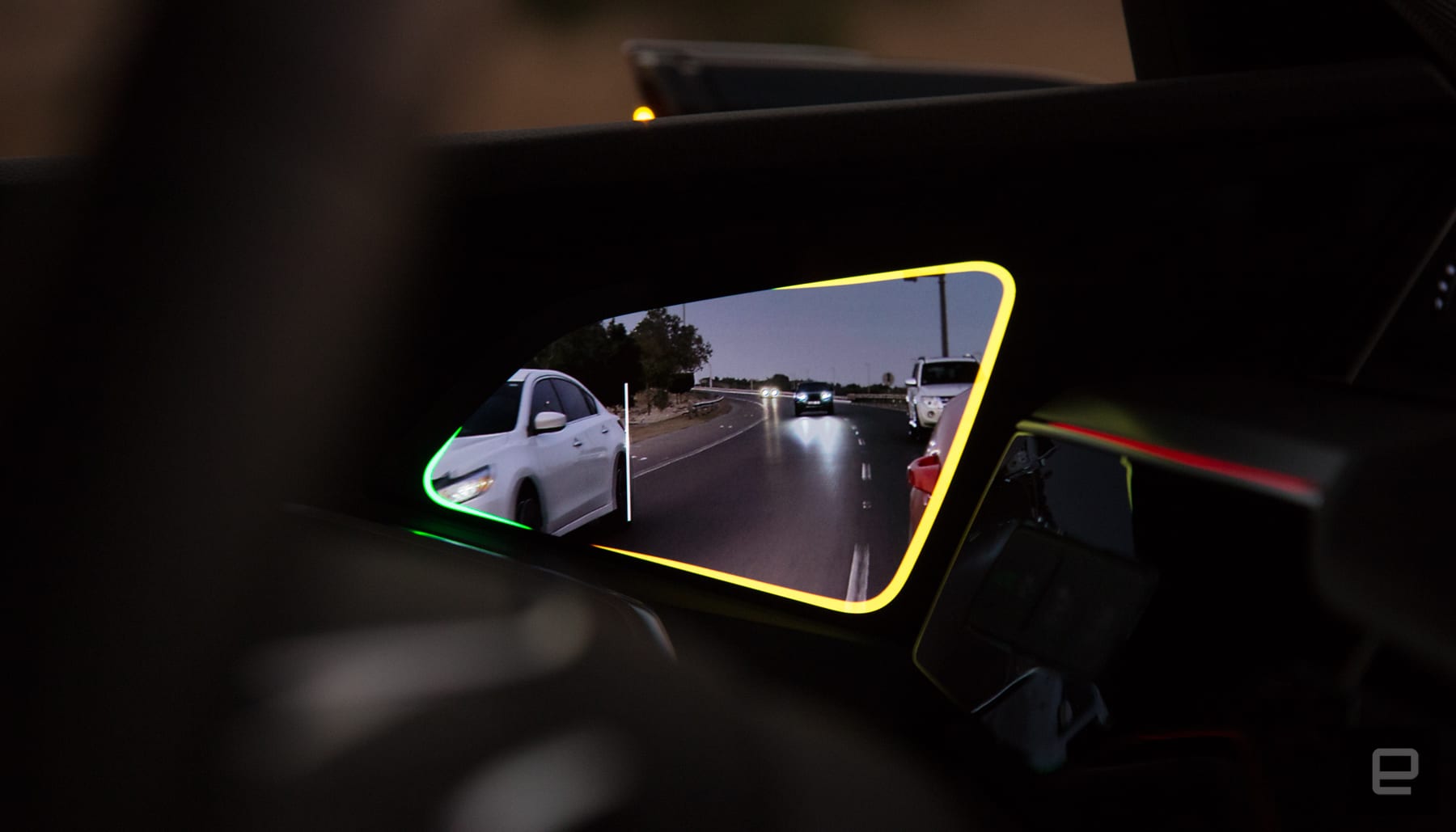 The problem is, other than making cars a bit more aerodynamic, there isn't much value in adding more displays and cameras to a car when a mirror does the same job. I did like that the edge of the display glowed yellow when a car was behind me, but you could add that to a mirror.

Maybe if I get the car for a week, I'll come away a believer in a side camera and displays instead of mirrors. But that's unlikely since any car brought to the United States wouldn't be allowed to have the system. And since they're not allowed in this country, my thoughts on their usefulness have no real bearing on the car overall. I would have preferred a rear-view camera like the one found in Cadillacs and Chevy Bolt.

Crazy new side-view technology aside, the E-Tron is an outstanding Audi that just happens to be electric. It has all the usual Audi luxury and if you like the company's SUVs, you'll like this. Probably even more so because it's quiet, the torque is great and the fast charging means if your town has the infrastructure (which Charge America is hoping to roll out quickly) you can quickly charge while out and about. The biggest disappointment is that we have to wait until the middle of next year to get it. 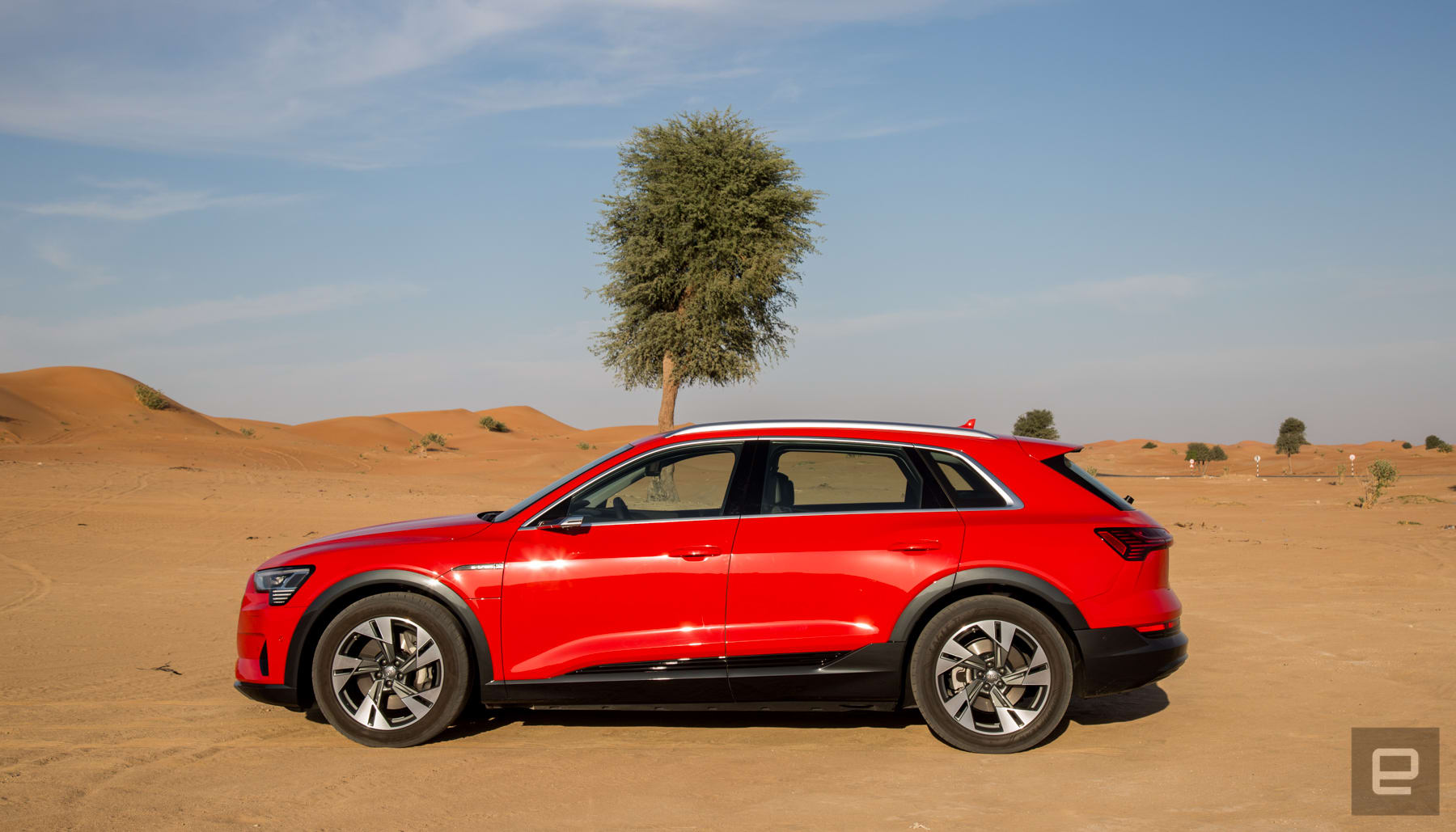 The E-Tron, like the I-Pace and Model X, shows that electrification and utility are not mutually exclusive. And if you can get some luxury in there are the same time, you might as well pamper yourself while doing your part to reduce your carbon footprint.