Google Maps can find you a nearby Lime scooter or bike

It only works in 13 cities for now, with more coming soon.

Google Maps is always ready to help you get where you're going, and the latest addition to its list of features is a tie-in with one of those electric scooter companies that have left their machines laying all over. Now, if you've looked up a route on Google Maps and have decided that walking is too slow and other means of transportation won't work, it can direct you to nearby Lime scooters or bikes.

Starting today in 13 cities (Auckland, Austin, Baltimore, Brisbane (AU), Dallas, Indianapolis, Los Angeles, San Diego, Oakland, San Antonio, San Jose, Scottsdale and Seattle), a navigation option shows how long it will take to reach the machine plus an estimate for the cost and time of the ride. 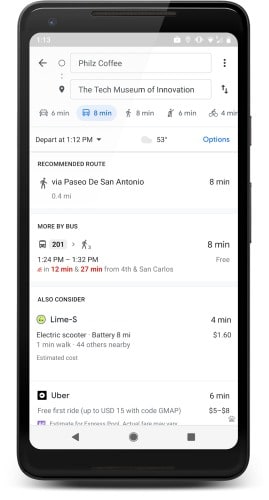 If you choose Lime as an option, then it will switch to the dedicated app, or hop over to your phone's app store (on iOS or Android) if you don't have it installed. It shouldn't be too surprising that Google picked Lime for the first scooter integration we're noticing in Maps -- along with Uber, its parent company Alphabet recently made a sizable investment in these scooters. Right after that deal closed Uber started offering Lime rentals via its app, and now Google is following suit. Being so visible in Maps will give Lime an edge over competition -- we'll see if anyone launches a similar tie-in with Apple Maps, or if other mobility services join the recommendations on Google's Maps.

Turn on browser notifications to receive breaking news alerts from Engadget
You can disable notifications at any time in your settings menu.
Not now
All products recommended by Engadget are selected by our editorial team, independent of our parent company. Some of our stories include affiliate links. If you buy something through one of these links, we may earn an affiliate commission. All prices are correct at the time of publishing.
Google Maps can find you a nearby Lime scooter or bike
ebike
gear
google
googlemaps
lime
mobile
scooter
scootersharing
transportation
uber