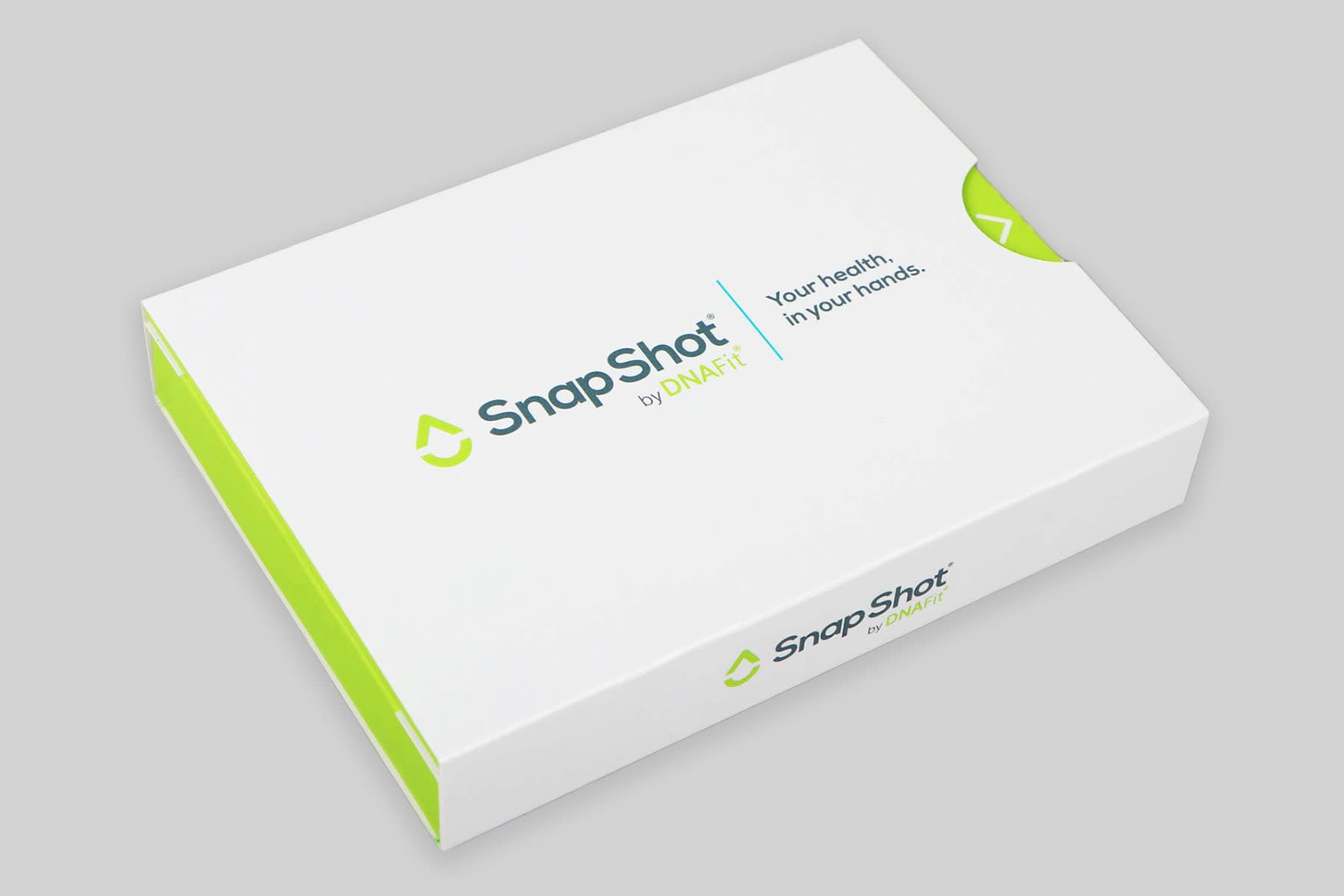 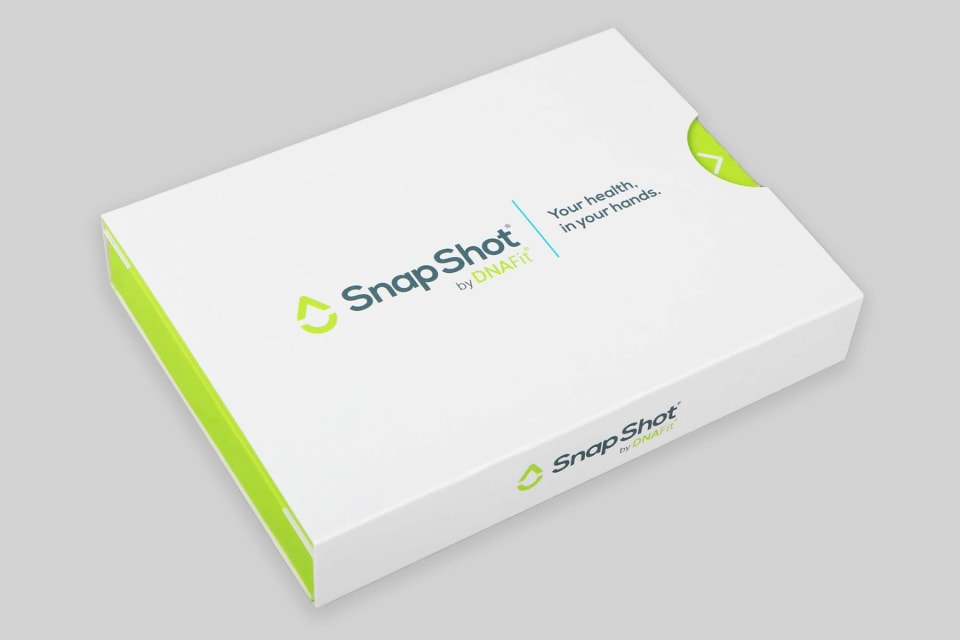 What do you get the amateur athlete who already bought the fancy shoes, had their gait analyzed and owns a too-tight triathlon onesie? Genetic testing, of course. It's in this field that weekend warriors are now looking for ways to shave seconds from their times. Peeping at your genes can only tell you so much, which is why companies like DNAFit are expanding.

Snapshot is DNAFit's second product, a blood testing kit that examines your liver function and inflammation, as well as your vitamin, iron and lipid levels. The at-home kit enables you to fill a small vial with blood, and once you've sent it back, you'll wait just three days for the results. As well as the numbers, you'll receive a series of helpful notes from a doctor to explain them.

Inside the Snapshot box you'll find everything you need to take a blood sample from the comfort of your home. That includes a test tube, blood lancets to break the skin, alcohol wipes and plasters for your fingertips. Immerse your hand in warm water for two minutes, and then stab a digit or two, letting the resulting blood drip into the vial.

Only the ultra-squeamish need to worry about the quantity of blood being removed from your body. If you've ever had a finger-prick blood sugar test, then you'll already know the score, albeit this deals with larger quantities. Snapshot requires 400 microliters, or around 10 drops of blood for a test, and if you're ham-handed, your kitchen table will look like a crime scene by the end.

DNAFit already has my genetic information on file from when I tried the service in 2016. Back then, my DNA told me I had a high predisposition toward cancer, and my body didn't produce certain antioxidants to fight it. It meant that I had to radically reduce the number of bacon sandwiches I ate, and vastly increased my consumption of green vegetables.

Since then, I've tried to eat one portion of cruciferous vegetables a day, including a fistful of spinach with my lunchtime salad. I also cut my bread intake (I'm at high risk of coeliac disease) and take Omega-3 supplements. The report also said that I had a skewed fitness profile, and I should concentrate on endurance exercise (rowing, cycling) over high-intensity training.

DNAFit's Sebastian Corpe, Snapshot's Product Head, offered to guide me through my results. That was paired with commentary from Dr. Senthil Sundaram, Professor at Wayne State University and CMO of Prenetics. To my surprise (and delight), the vast majority of the tests came back normal for someone of my age, gender and ethnicity.

What was concerning were my cholesterol levels, how well my liver was functioning and how much Vitamin D was in my system. My overall cholesterol level is 5.15 mmol/L, just over the recommended limit of 5 mmol/L. More specifically, my LDL cholesterol levels are too high, as is my triglyceride to HDL ratio, which is "raised." Clearly, I need to be doing more for my heart -- a fact highlighted during the writing of this article, when my mum had a small stroke of her own.

"ALT is an enzyme that enables a chemical reaction to take place in the liver," wrote Dr. Sundaram. "When these cells are damaged or die, due to liver disease, the ALT leaks into the blood." It's a worrying indicator of liver damage, which could be caused by hepatitis, cirrhosis, cancer, hemochromatosis, mononucleosis or pancreatitis.

This result is concerning, if only because I'm not a big drinker, in fact since my son was born, I've probably had one drink in five months. I don't believe that I've got hepatitis, which makes me worried that I've got something more serious lurking inside me. And I've booked an appointment with my doctor to hopefully find out more.

The final red flag was my old enemy, Vitamin D, which was well below the lower level of 50 nmol/L, at 31.7 nmol/L. Corpe did, at least, try to cheer me up by saying that Vitamin D's half-life is so long that I'll need to take supplements for years before I'll see an increase. Not to mention spend more time -- ugh -- exposed to sunlight.

I'm still not entirely sold on the wholesale benefits of this sort of private medical testing for health and fitness. Most of the remedial advice is the same you'll have been told from the moment you left the womb. Get more exercise, eat food that is better for you, in smaller quantities, don't drink as much, get lots of sleep, et cetera.

But, the fact that these tests are available for a relatively small fee may help those who want to take control of their health. And if you're a weekend warrior looking for a fresh marginal gain, it helps to identify where exactly you need to direct your attention. I'm grateful that DNAFit also offers a plain PDF of your results for easy sharing with a doctor.

Corpe said that he expects around a third of DNAFit's existing customers to try Snapshot, but you don't need to. If you fancy the idea of getting your blood work in isolation, you can do so even if you haven't laid down cash for the other test. And, if you want to lean into this, the company will let you take the test once every three months to track your progress.

During my call with Corpe, the conversation inevitably turned toward Theranos, which has muddied the water for all blood-testing startups. "What we can do is fall back on evidence," Corpe explained, adding that DNAFit will only offer tests with a high level of scientific validity. He said the company works closely with doctors to ensure that only valid advice is offered to users.

Corpe also said that Theranos' plan to use a single blood drop from the finger was always going to be a risk. He explained that "there's a drop-to-drop variation" in capillary samples that's only cancelled out in aggregate, "which is why you need volume." According to Corpe, Snapshot's 400 microliters is a small sample, but more than enough for what's being tested.

Already available in the UK, Snapshot costs £64 (around $80 including sales tax), and it's hoped that a US-based lab that can do the same tests will be found in the near future. And that's not the only thing that we can expect to hear more on at some point next year, since DNAFit is looking at opening up its APIs. That will have the potential benefit of letting fitness trackers add genetic guidance to smartwatches.

Further down the line, there's a plan to develop meal kits that will help folks eat right according to their genes.

As for me, I think that the end of the year is a good time to take a moment to plan for my future. I'm pleased that the bulk of my results are normal and that I'm not as terribly unhealthy as I had initially feared. But a trip to the doctor to examine my ALT levels is coming, and I will probably need to resolve to do better in 2019. Perhaps Snapshot will inspire more people to do the same.

Image credit: DNAFit
In this article: Blood, BloodTest, DNAFit, Fitness, gear, medicine, Snapshot
All products recommended by Engadget are selected by our editorial team, independent of our parent company. Some of our stories include affiliate links. If you buy something through one of these links, we may earn an affiliate commission.