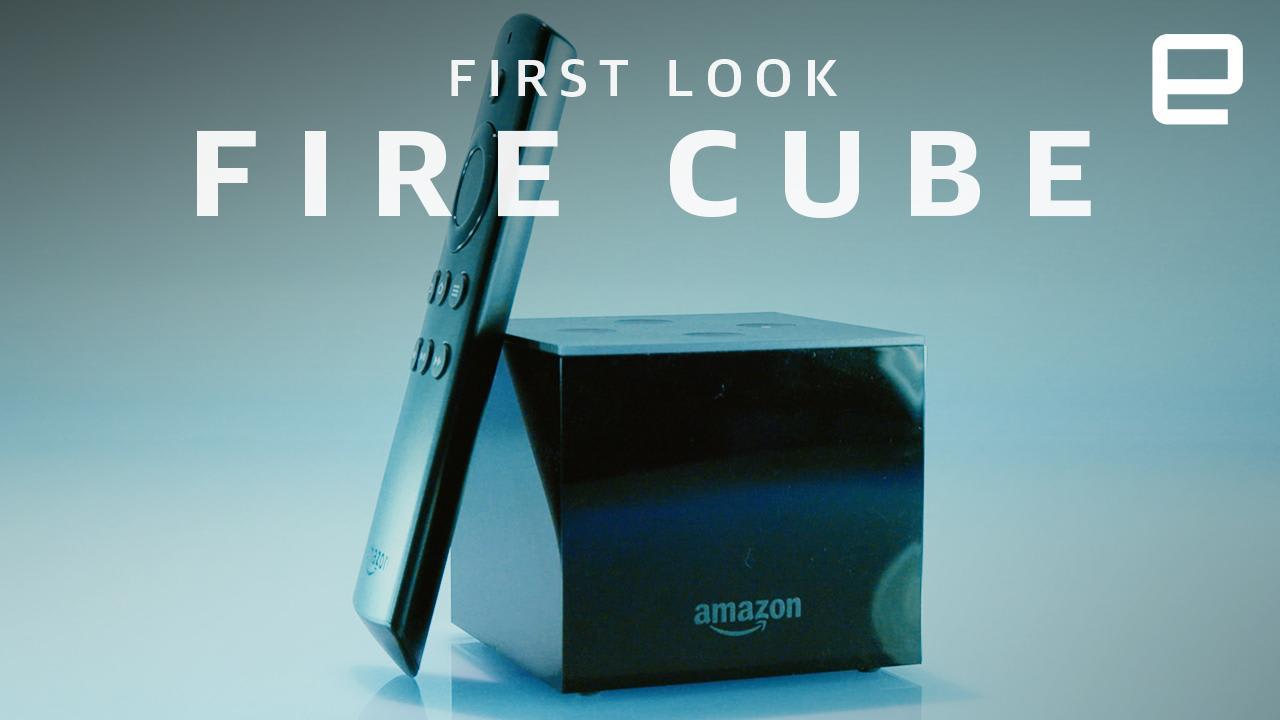 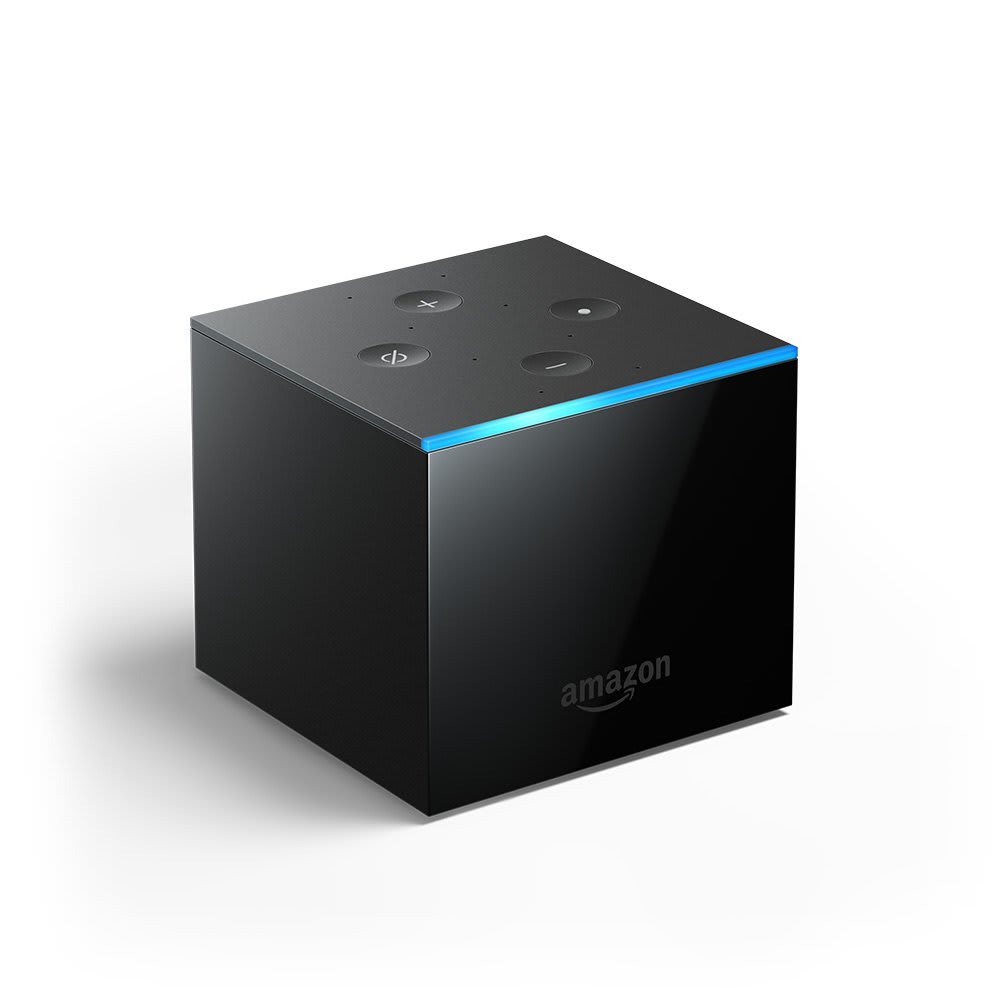 Update: While we originally planned to do a deeper dive into the Fire TV Cube, several days of testing didn't reveal much more about the device. We've updated our first look with a new conclusion, and have assigned it a review score.

When you consider the popularity of Amazon's virtual assistant Alexa and the company's Fire TV streamers, it was really just a matter of time before the folks at the Everything Store decided to mash them up. In fact, Amazon already has, sort of: The company started down that path last year by giving Echo devices the ability to pass commands along to a Fire TV or Fire TV Stick. With the new Fire TV Cube, though, Amazon is trying to break down the wall between Alexa and the content you want to see altogether.

Gallery: A closer look at the Fire TV Cube | 10 Photos The Fire TV Cube is a glimpse at where voice controlled TV viewing is going — but it’s not quite the future yet. Some voice commands are genuinely useful, but you’ll likely be frustrated by the things it can’t do. Most people would be better off with a Fire TV and a separate Echo Dot.

Be the first to review the Fire TV Cube?
Your ratings help us make the buyer’s guide better for everyone.
Write a review

The Fire TV Cube itself is a glossy black box that, aside from the blue ring that lights up when Alexa is listening to you, looks about as nondescript as a bit of home theater kit can be. (It's also not strictly speaking a cube since its sides are different lengths — what gives, Amazon?) I'm not much of a fan of the glossy finish, but it's here for a reason: There's an omnidirectional IR blaster inside that gives the Cube the power to control some of your more traditional, non-smart home theater equipment. You'll find an HDMI-out around back alongside a port for an IR extender and a microUSB port you can use to connect a full-sized ethernet adapter. There's also 16GB of storage inside the box, which is double what you'd get from any other Fire TV.

While most Amazon Echo devices use an array of seven far-field microphones, the Fire TV Cube has eight. The extra mic is said to be helpful for listening for Alexa's wake-words because the Cube is meant to sit much closer to your television and sound system and probably has to deal with more ambient sound than a standard Echo. Amazon says its voice recognition algorithm has been tuned to be more "hostile" to the sounds of movies and television shows, and so far, the Cube has done well at hearing wake-words I've uttered from across the room.

There's a traditional Fire TV remote in the box, but Amazon seems fairly insistent that you can get by just fine without it. So far, that mostly seems to be the case: Once you've breezed through the setup process (complete with jaunty music and a friendly video), you can ask Alexa to play specific shows, search for results within certain genres, switch between multiple inputs and turn on extra hardware like sound bars or receivers. Those latter commands are a great argument for why the Cube needs to exist — it allows for more nuanced control over the mechanics of your TV set.

The interface here looks just like it does on any other Fire TV, but Amazon modified it a bit to make it a little more voice-friendly. If you've asked to see something specific — like, I don't know, dramas — Amazon's search results will appear with numbers you can verbally select them with. (Think "Alexa, play number two.") In general, Alexa handled the thankless task of helping me sift through a see of content surprisingly well, but it becomes clear after a little while that this whole thing could use a little more fine-tuning.

For me at least, the trickiest part of the Fire TV Cube learning curve is figuring out how to get Alexa to do what you want. That's not necessarily a knock against Amazon, either — at this early stage, some streaming services are better equipped to deal with Alexa voice commands than others. In my experience, Netflix, Hulu and over-the-top TV services like PlayStation Vue have performed the best, allowing you to call up specific shows and jump between live channels without much trouble.

Note the word "much." Some fairly basic commands, like fast forward for instance, aren't supported by every app. Even Netflix, which has generally been the most receptive to voice commands, can't quite figure out what to do when I want to jump ahead ten minutes. Amazon's own Prime TV service isn't immune to these lexical limitations either -- asking it to play the next episode of The Grand Tour worked just fine, but Alexa often floundered when I asked it to play the previous one. At least for now, it might be a good idea to keep that remote around just in case.

At $120, the Fire TV Cube is a bigger investment than the $70 Fire TV, which is a very capable video streamer. And given that the Echo Dot currently sells for $35 and works better as a standalone Alexa device, it might be a smarter purchase alongside the Fire TV. Don't forget that Alexa devices can also route commands to Fire TVs, which is almost as convenient as the Cube's built-in voice functionality.

There are a few other things you should probably know about the Fire TV Cube:

In fairness, all these movies and television shows (not to mention the specialized vocabulary of home theater gear) are new territories for Alexa, and it'll take time for Amazon's assistant to get really good at dealing with everything. At this point, the Fire TV Cube is off to a decent start, but it's not quite a must-have device yet. Instead, it's a glimpse at what media streamers could be if they had a bunch of microphones and could understand voice commands.

In this article: alexa, amazon, amazonfiretv, av, cube, firetv, firetvcube, gear, HomeTheater, review
All products recommended by Engadget are selected by our editorial team, independent of our parent company. Some of our stories include affiliate links. If you buy something through one of these links, we may earn an affiliate commission.