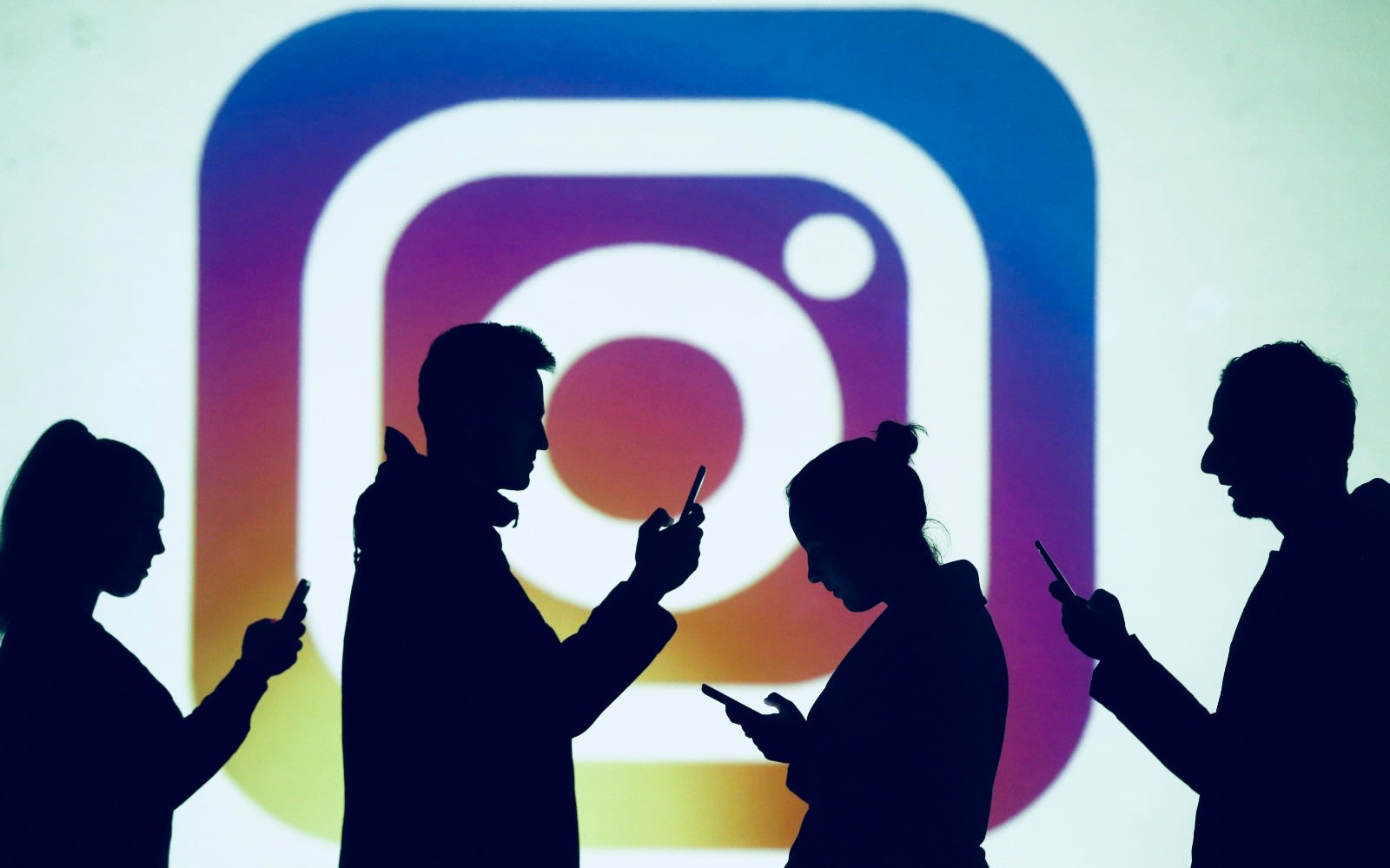 Ahmed Simrin, 15, is one of the millions of teenagers who uses Instagram. He doesn't post pictures on his page every day (there are two total), yet somehow he's managed to get nearly 3,000 people to follow it. That doesn't make him a social media influencer, by any means, but his Instagram page quickly stands out when you realize one of the photos has over 22,000 comments and 4,000 likes. This type of engagement is typically only seen on accounts from celebrities. His viral picture, posted in October 2017, isn't anything out of the ordinary, either: It's Simrin simply standing next to his friend, each staring directly into the camera, with a caption that reads "Fresh out the oven." But then you look at the comments, and it would appear that poor Simrin is no longer with us. There are thousands of users telling him to rest in peace. "RIP, you'll be missed." "RIP, bro." "You died way too young." "I can't believe you're gone." The list goes on and on.

He just thought it would be fun to trick people into thinking he was, so he decided to start leaving comments on dozens of Instagram accounts telling others to go comment RIP on his pictures. His hope, he told Engadget in an interview, was to go viral. And that he did: "Hey guys, can u guys comment RIP in my most recent pic because i want my gf to think i'm dead, my family and i recently moved and she wants to keep that relationship, i really want to move on, it was a toxic one." That comment from Simrin has turned into a trend that's being copied and you can see variations of it all over Instagram, especially on celebrity accounts, which are heavily trafficked and give users the sense that their prank has a higher chance of succeeding. 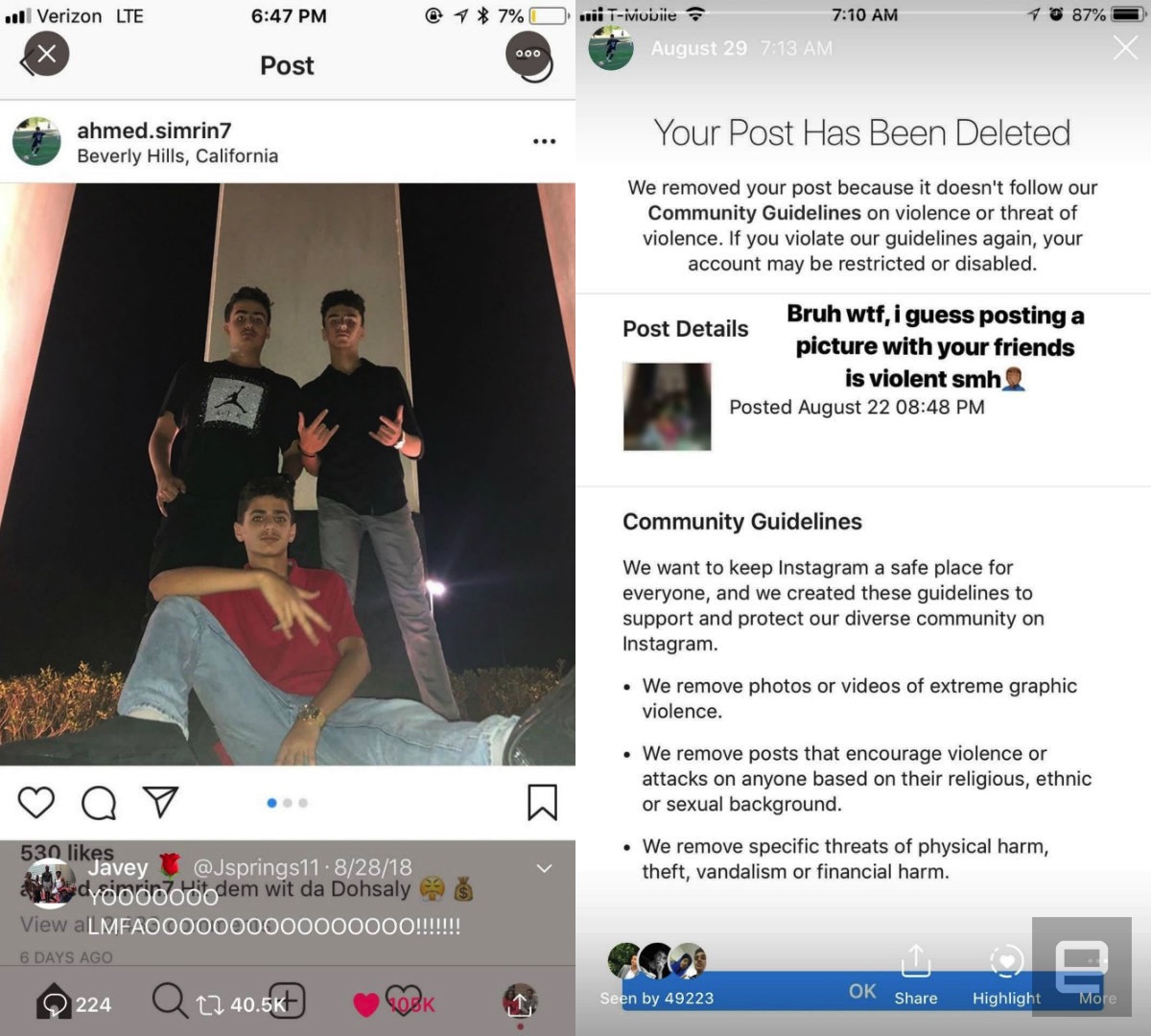 Simrin said he actually had another picture with more than 10,000 comments, but that Instagram removed it for violating its Community Guidelines "on violence or threat of violence." He said this happened because two Twitter users made a meme out of him on August 28th, after seeing his comment on Rapper Travis Scott's Instagram page, which has 12 million followers. What those accounts did was take screenshots of his Simrin's trick comment (he wasn't really in a toxic relationship) and then mocked the fact people were actually going to his pictures to say RIP. One of the tweets alone has racked up more than 300,000 likes and 150,000 retweets, and Simrin said they're ultimately the reason his last picture on Instagram has so many likes and comments.

Between August 24th and August 30th, Simrin's Instagram page was discovered by 250,000 other users and his profile was visited 316,000 times, according to screenshots he shared with Engadget. Simrin said people are still commenting on his pictures, though not as much as when those tweets helped him go viral for a few days. "The idea just popped up in my head," he said, adding that he wasn't aware of anyone doing the "RIP thing" before he started to spam accounts on his own. "I decided to start doing it because why not give it a shot [and] do something new that [you] can entertain yourself with?" Simrin said. "People get famous from doing anything these days."

"I decided to start doing it because why not give it a shot [and] do something new that [you] can entertain yourself with. People get famous from doing anything these days."

Not everyone gets the same reaction as Simrin did, but that doesn't keep people from trying to go viral themselves. If you go to Kim Kardashian's latest Instagram photo, one of the first comments you'll see is from a "benittoferretto" account, who seems to have copied and pasted Simrin's prank in hopes of getting people to go his most recent picture and say RIP. So far, though, that comment has a single like.

Another comment, on the "sneakernews" Instagram page (which has 7.5 million followers), "riccardomancaa" said, "Can y'all comment RIP on my latest photo so people think I'm dead and so I cannot go to school." A lot of the replies to these comments seem to be "stop" or "this shit getting corny" (as user "boobaveli" put it), which indicates people are seeing it often across Instagram.

Like with many memes, it's tough to figure out where exactly this one originated. Actress Dove Cameron tweeted about a similar trend in 2014. "The 'comment rip on my photos to scare my friends' trend on Instagram is really, very not OK," she said at the time. "Death and loss should never be disrespected." Simrin said he wasn't "really into social media" back then, but he would like to take credit for the hundreds of people who are joining in on the trend by leaving similar comments on accounts like Drake's and Kim Kardashian's. Not all of them are teenagers, either: We reached out to dozens of Instagram users who are doing it, including people in their 20s and 30s, but the majority of them refused to speak on the record out of fear of being judged.

Pranks aren't anything new, but now they have the power of social media behind them, so their effect be amplified by how quickly they can be seen by millions of people instantly. 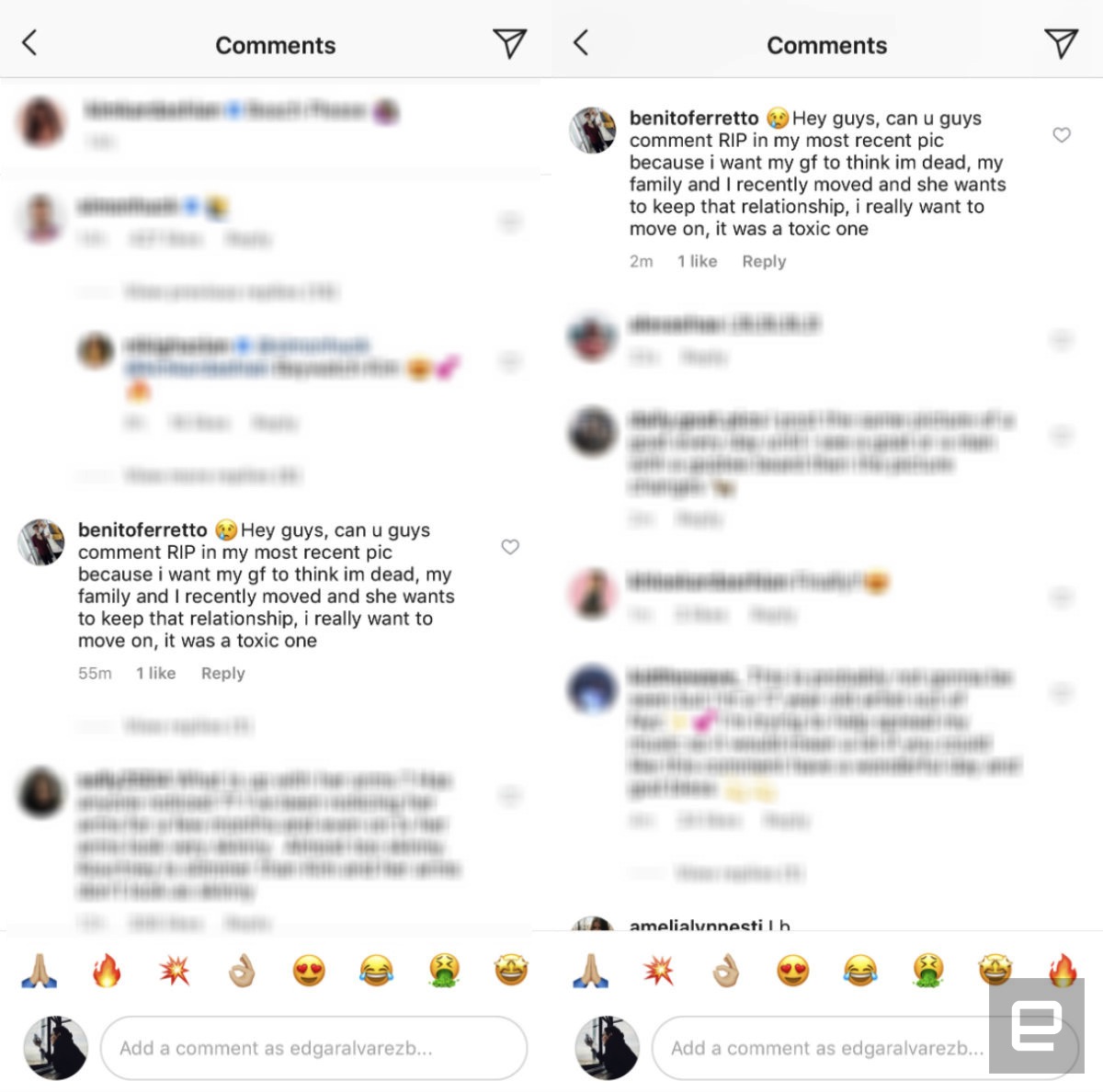 That's how internet challenges take on a life of their own, whether it's a viral dance of a Drake song or people dumping buckets of ice water on themselves to raise awareness for ALS. Simrin may think his prank is funny or innocent, but it's hard to imagine his friends or family feeling the same way. Imagine if he were your son or brother and, without any context, you went to his Instagram page and saw a bunch of people telling him to rest in peace. You would likely panic immediately.

"My parents and my little sister have no idea this even occurred," said Simrin. "However. my older sister thought it was pretty cool and creative."

Jeff Hancock, a professor of communication and founding director of the Stanford Social Media Lab, said that the motivation behind trends like this is just the "human psychological weirdness." He said there's no doubt these types of internet pranks are "a sick form of humor, but nonetheless, it's humor, and that's human." This behavior shouldn't be blamed on social-media apps, said Hancock, although Instagram, Snapchat and Twitter do make everything more visible, and that leads to more mimicry and copycats. "We know from old media studies if it bleeds, it leads," he said. "Negative emotion is much more attention-grabbing, and [making someone] think that somebody's died is about as negative as you can get."

"i want my gf to think i'm dead" LMFAOOOOOO instagram somethin else pic.twitter.com/FPfdyG02XX

Social media is fueled by likes, and that can drive people to inconsiderate extremes. This isn't anything new, of course, because there are endless examples of how toxic Facebook, Instagram and Twitter can be. "Because they're not in real life ... looking at people who might be sad, horrified or shocked, people play the [prank] without thinking about the fact that there are people who would be upset, hurt or psychologically affected by the news of their death," said Karen North, a clinical professor of communication at USC Annenberg, an expert on social-media and psychology. "Because that's not part of a game. The game is to get people to comment, and the other game is to get people to fall for the fake report of your death."

Simrin said he's stopped leaving comments asking for RIPs because "people were getting offended," though he said that was just envy on their part. "Most of those who talk smack over the internet are just jealous," he said. "They don't wanna see people succeed in life."

Update 9/20/18, 11:20AM ET: Instagram told Engadget the image it removed from Simrin's page, which was part of his original prank and had over 10,000 comments, was an "error" and it has now been restored. "We apologize for the inconvenience caused," the company said. "This type of activity does not violate our policies."

In this article: comments, entertainment, facebook, fake, fakenews, gear, hoax, instagram, internet, prank, pranks, rip, services, social, socialmedia, trend, trends, twitter, viral
All products recommended by Engadget are selected by our editorial team, independent of our parent company. Some of our stories include affiliate links. If you buy something through one of these links, we may earn an affiliate commission.