It's more like an all-in-one PC masquerading as a gaming notebook.

Last year, gaming laptops got thinner and lighter. This year, they're getting wild. Take the ROG Mothership, it's ostensibly a new 17-inch gaming laptop from ASUS -- but it's actually something much weirder. Hit a button, and a huge kickstand juts out from behind the screen. And once you fold down the keyboard, you can feel free to pull it away from the screen and use it wirelessly, as if it were a massive Surface Pro. Basically, ASUS made an all-in-one gaming PC in laptop form. It brings a new meaning to the term "desktop replacement."

The ROG Mothership is one of the first gaming laptops to use NVIDIA's RTX 20-series GPUs, including the most powerful model, the 2080. That promises plenty of raw power, as well as real-time ray tracing, a rendering technique that brings game lighting close to what we expect from CG Hollywood movies. That feature isn't widely supported yet by developers, but current titles using it include Shadow of the Tomb Raider and Battlefield V. NVIDIA's latest GPUs are also a big reason why ASUS was able to develop such a unique gaming laptop, since they're able to efficiently cram a ton of power into slim laptop cases. (It also helps that laptop makers are continually refining their cooling techniques.) 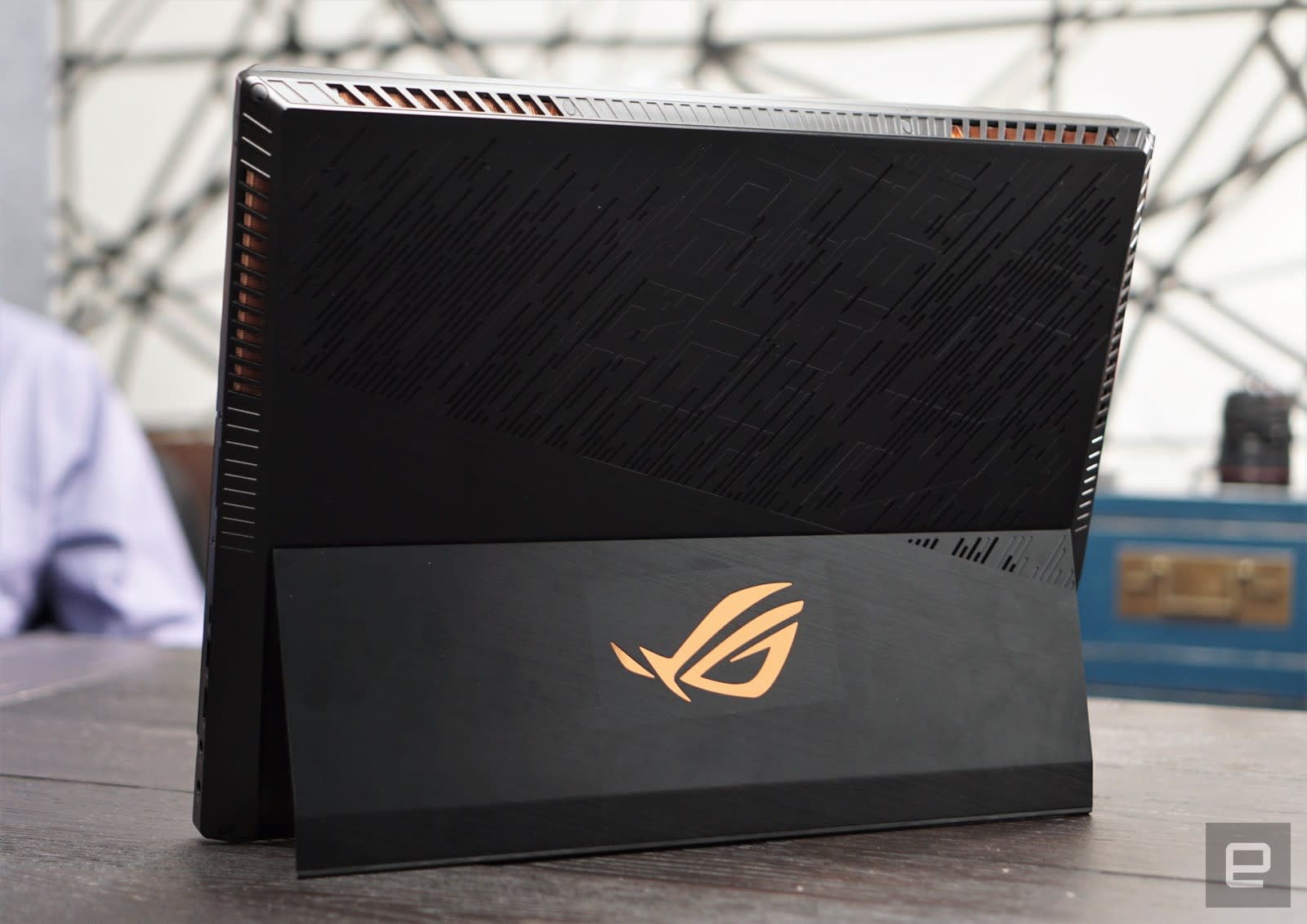 I didn't get to see the ROG Mothership in action, but simply seeing it in person is a wonder. I originally thought it was just another clunky 17-inch notebook -- then the kickstand popped out, and my mind was blown. Like an all-in-one PC, the motherboard and other hardware components are right behind the screen. As a 10.3-pound beast built out of two chunks of aluminum, it feels like a tank -- hence the need for a kickstand to prop things up. ASUS reps tell us they explored many different design concepts as they tried to imagine a next-generation laptop. At one point, they held up a laptop vertically and realized it was the perfect orientation to keep it cool. By doing so, they're able to exhaust heat more efficiently as it rises to the top, whereas on a horizontal plane all of the heat is on the same level.

You can use the ROG Mothership like a very large laptop by keeping the keyboard connected to the monitor. Once you remove it, though, a whole new world of possibilities opens up. It's basically no different than using a desktop with a 17-inch monitor. The keyboard feels great, with a solid amount of travel, and its 2.4 GHz wireless connection is pretty responsive. You can also fold it in half to give it a more ergonomic angle, as well as save some desk space. And of course, you could just remove the it entirely and replace it with your favorite mechanical gaming keyboard.

As you'd expect, ASUS is also aiming to deliver a solid gaming experience with the Mothership's 17.3-inch display. It's available in 1080p with a 144Hz refresh rate, 3ms response time and NVIDIA's G-SYNC. Given that it's such a large screen size, though, I'd expect a 4K version eventually too. Under the hood, it's powered by Intel's Core i9-8950HK CPU, which is overclocked out of the box to reach boost speeds up to 4.78 GHz. You can stuff in up to 64GB of RAM, and the very brave can run three 512GB NVMe SSDs in a Raid 0 array. If you don't need to game and just want to work on documents, you can also switch over to integrated graphics by hitting a button. That process requires a reboot, but it should net you a few extra hours of battery life. 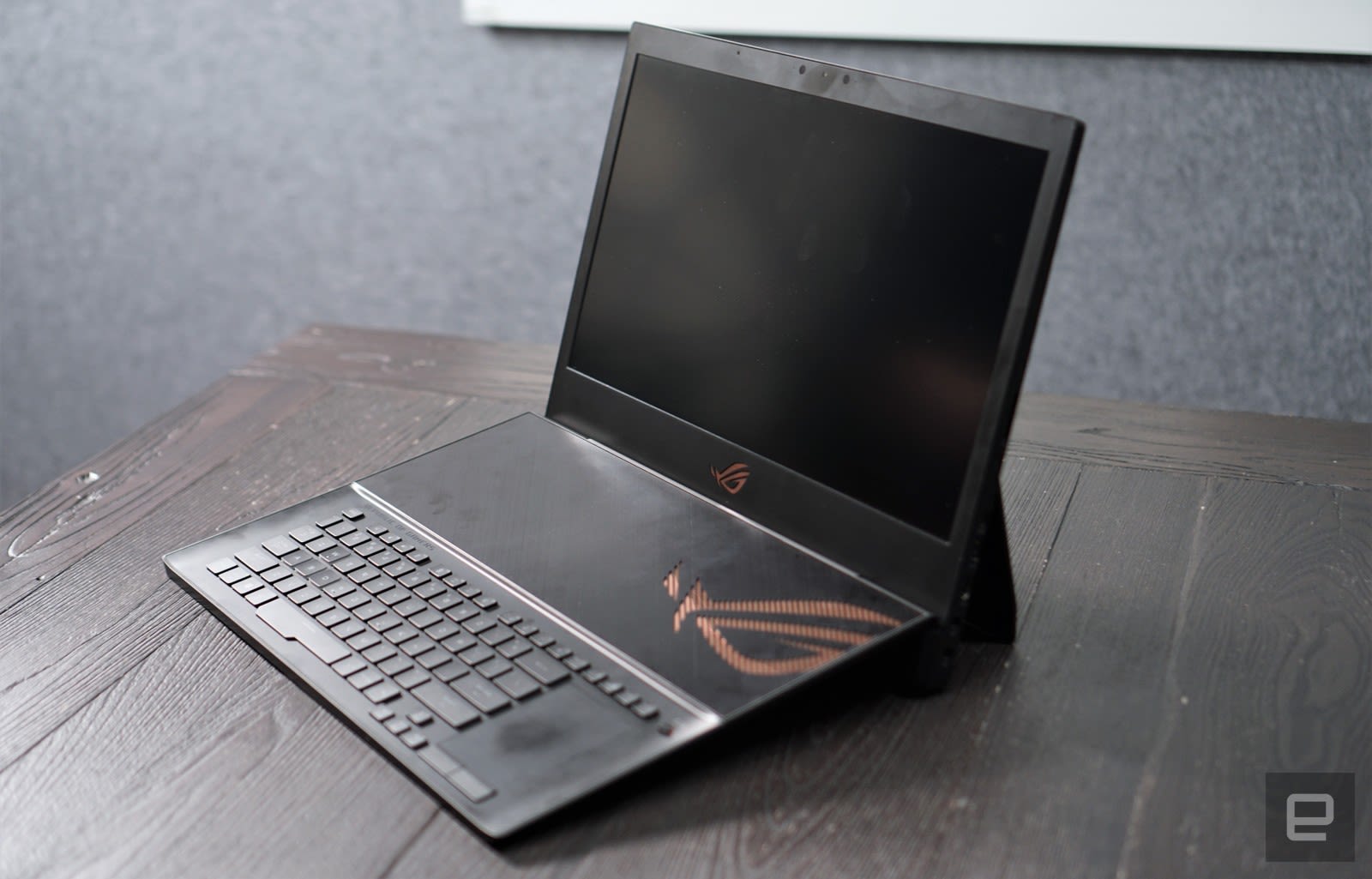 At this point, ASUS isn't talking about a price or availability date for the ROG Mothership, but you can expect it to cost much more than a typical gaming notebook. It's almost like a limited edition device -- the company isn't planning to put it on the shelves of Best Buy anytime soon. Building every unit also takes a while, since it involves plenty of hand crafted components. Even if its price and appeal is relatively limited, though, the ROG Mothership is a good sign for the notebook industry. While everyone else is focused on getting thinner and lighter, ASUS wants to rethink the way we use gaming laptops entirely.