Hupnos sleep mask gets to work the minute you start snoring

This may save many marriages.

I have a confession: I am a loud snorer, and that's bad news for my wife. As funny as this may sound, it's a real problem for many couples, to the point where they would end up sleeping in separate rooms. I'll need to start slimming down to tackle my snoring (and potentially sleep apnea) in the long run, but in terms of immediate solutions, there are breathing devices that I can wear while sleeping. I've been hesitant to try such products given the mixed feedback, but at CES, I came across the Hupnos smart sleep mask which seems like a good place to start.

In a nutshell, Hupnos -- similar to the Greek word for "sleep" -- is a lightweight microfiber sleep mask that comes with a silicone nose piece plus breathing valves. It's basically an EPAP (Expiratory Positive Airway Pressure) device but enhanced by various sensors. The idea came from founder and CEO Curt Ray, who decided to deal with his own snoring issue after his wife complained four years ago. Almost 60 design iterations later, Ray's team brought out the Hupnos, which was successfully funded on Indiegogo late last month and is currently serving over 500 users.

Hupnos works by detecting your sleeping position and whether you're snoring. If you're indeed sawing logs while lying flat, the mask will send vibrational cues to change your sleeping position, in the hopes of immediately stopping your snoring. Failing that, Hupnos will then close the expiratory valve -- by way of a motorized lever covering the hole -- to increase the exhalation pressure, thus clearing your airway to reduce snoring. Meanwhile, inhalation remains pretty much unaffected thanks to the two larger circular valves.

If all goes well, the user wouldn't even remember that the mask was in action the next day, as the EPAP feature only kicks in when the user is snoring. In contrast, the conventional EPAP devices don't have adjustable pressure, so they actually made sleeping more difficult and users ended up using their mouths to breathe instead, according to the Hupnos team's research. 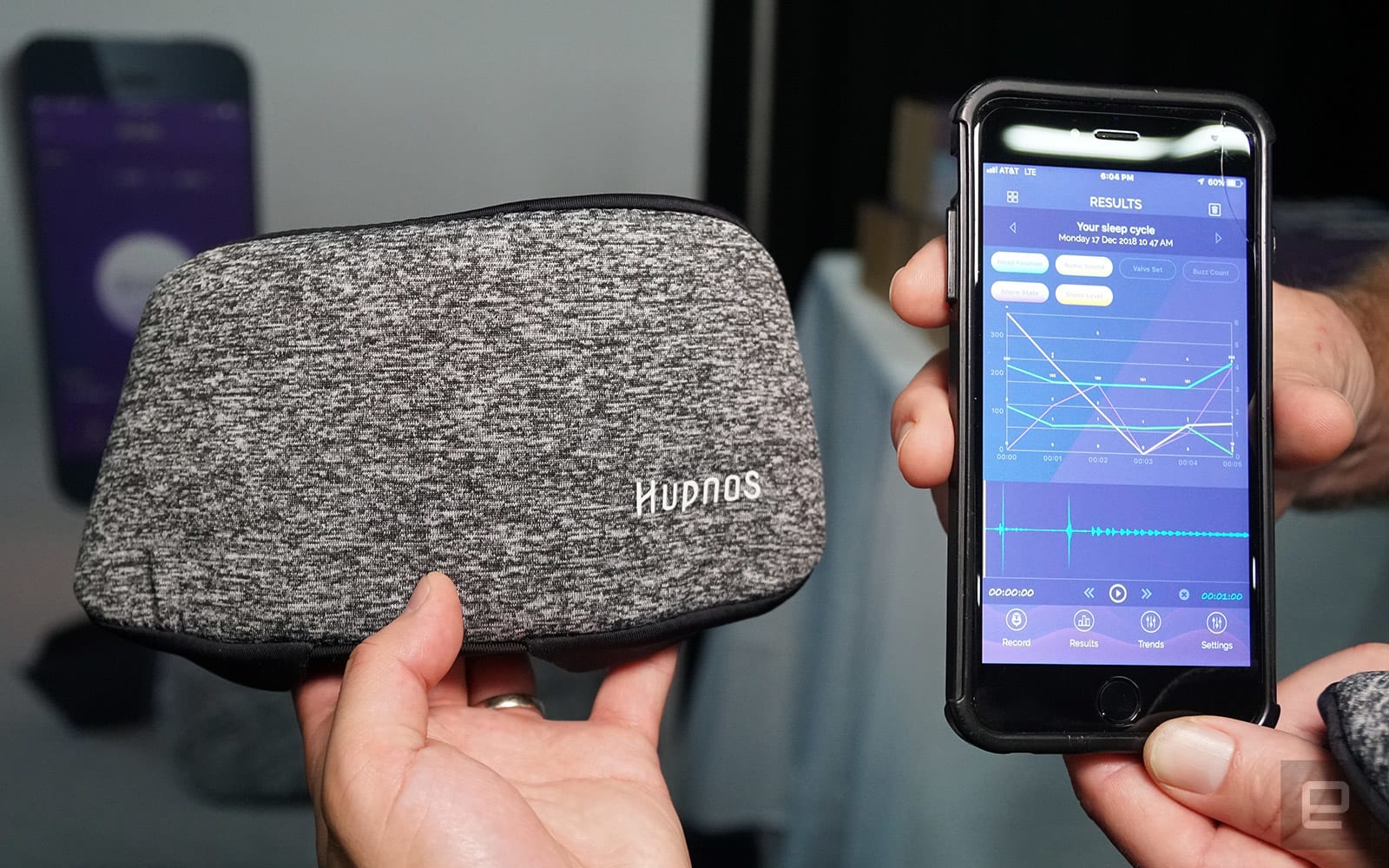 The smart part about Hupnos is that this is all controlled by the iOS or Android app via Bluetooth 4.0 LE, and likewise, the mask sends back sleep quality data as well as triggering audio recording for your snoring. Based on your sleep data, Hupnos can better determine when to send out vibrations or whether to increase the pressure. The app also lets you punch in factors like smoking, coffee or alcohol, so that you can observe how these may affect your sleep. On a full charge, Hupnos can monitor at least 20 hours of sleep, which should be good for about three nights for most people; just plug it into a micro-USB cable when charging is needed.

While I obviously couldn't test the Hupnos on the show floor, I did get to try one on and was impressed by how light and comfortable it was -- even if I were to sleep on my side, theoretically speaking. The head strap was easily adjustable via velcro on both sides, and due to the way it splits open in the middle, my head wouldn't be pressing against it while resting on the pillow. As for the nose piece, it didn't take long for me to get used to breathing through it, though I'd recommend taking it out for some cleaning every once in a while. Likewise, the face mask can be separated for machine washing.

The Hupnos seems like a neat idea on paper, but I'll obviously remain skeptical until I've tried it myself -- stay tuned for an upcoming review. That said, this is one of those products that may work for some people but not necessarily for others, so it's a $179 gamble either way. If you're willing to take the plunge (especially for the sake of your relationship), just head over to Indiegogo to place an order.