LG Gram 17 hands-on: A truly thin and light laptop for its size

You can definitely take this large-screened notebook on your next business trip.
C. Low|01.07.19
@cherlynnlow

We weren't too impressed by LG's lightweight Gram laptops when they first launched two years ago, but that didn't deter the company from making more of them. And I'm glad it did, because here at CES 2019, we're getting our first look at the 17-inch LG Gram and I'm kind of amazed at how thin and light it is.

LG already announced the new Gram 17 last month, but a press release can't fully convey the pleasure I felt lifting a 17-inch laptop with just one hand and barely feeling any strain on my arm at all. The 17-inch notebooks I'm used to seeing, and that are typical to the industry, are chunky, beefy machines. I certainly can't lift any of those beasts with one hand without feeling like I might pull a muscle.

The Gram 17 is nothing like that. Its razor-sharp profile is the first indication that it's a different beast from its gaming-centric cousins, and its 2.95-pound weight makes it quite travel-friendly. Of course, we haven't seen many people go on business trips with 17-inch laptops, but that's most likely due to their unwieldy size and heft.

With its larger screen and body, the Gram 17 is able to offer a full-size keyboard complete with a numpad as well as a roomy trackpad so you can zoom in plenty before running out of space. The 2,560 x 1,600 LCD display gets pretty bright, and while colors were vivid, I wouldn't mind deeper blacks and richer colors. 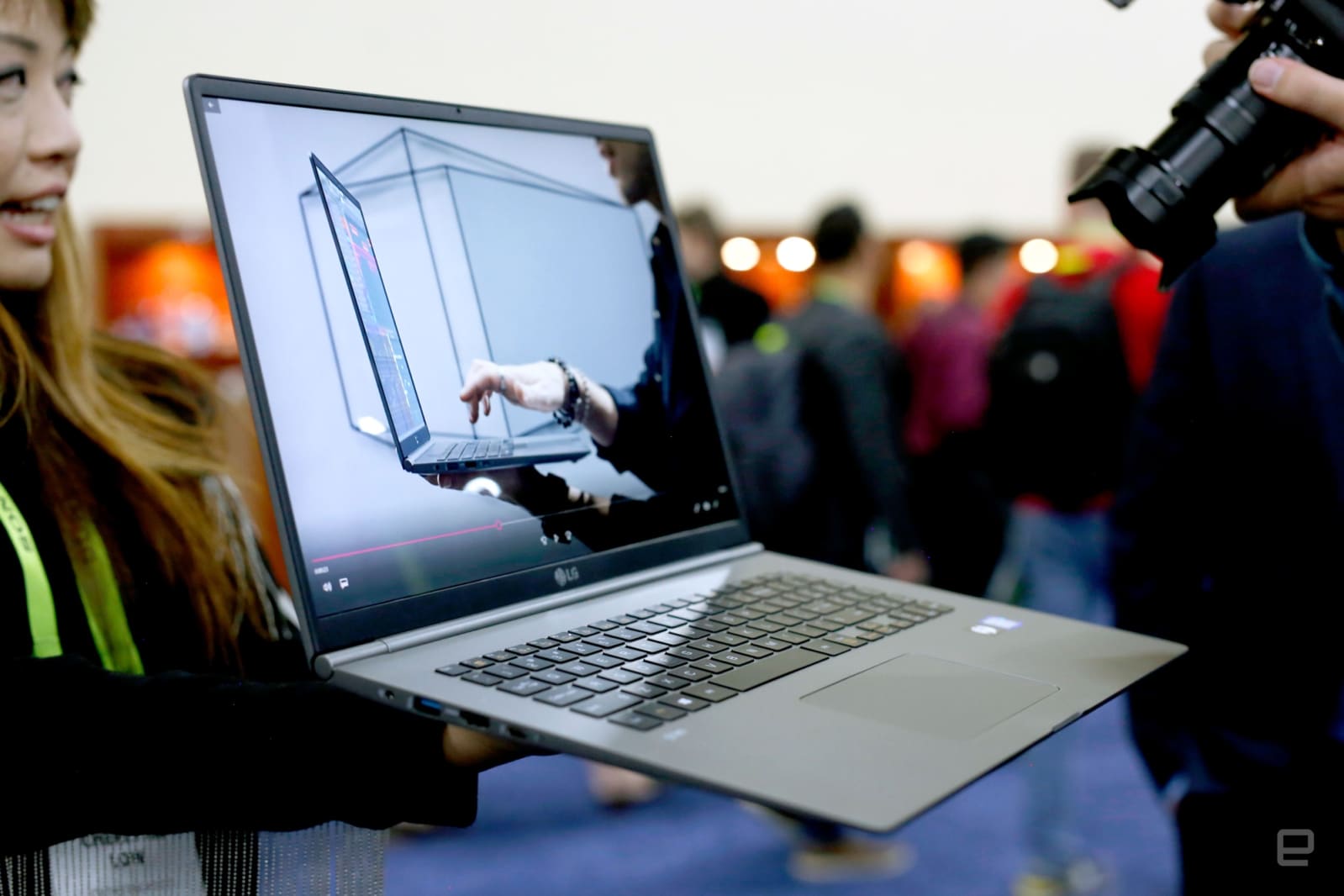 Also, because it has more room in the chassis, LG was able to squeeze in a 72Whr battery that it says will last up to 19.5 hours. That's impressive, especially given most 17-inchers don't last very long since they're expected to remain chained to a charger on your desktop.

Unlike most laptops of its size, though, the Gram 17 doesn't carry a discrete graphics card. It comes with an eighth-generation Intel Core i7 CPU with integrated HD 620 graphics as well as 16GB of DDR4 RAM and a 512GB SSD. That's enough for most common workflows, but those looking for a machine for gaming or design work might need something with a discrete GPU.

LG kitted out the edges of the Gram 17 with a generous array of ports too. You'll get three USB-A sockets, two USB-C, an HDMI, a microSD card reader and a headphone jack. For those who like plenty of connectivity options without having to carry around loose accessories or a dongle, this is a sweet setup. 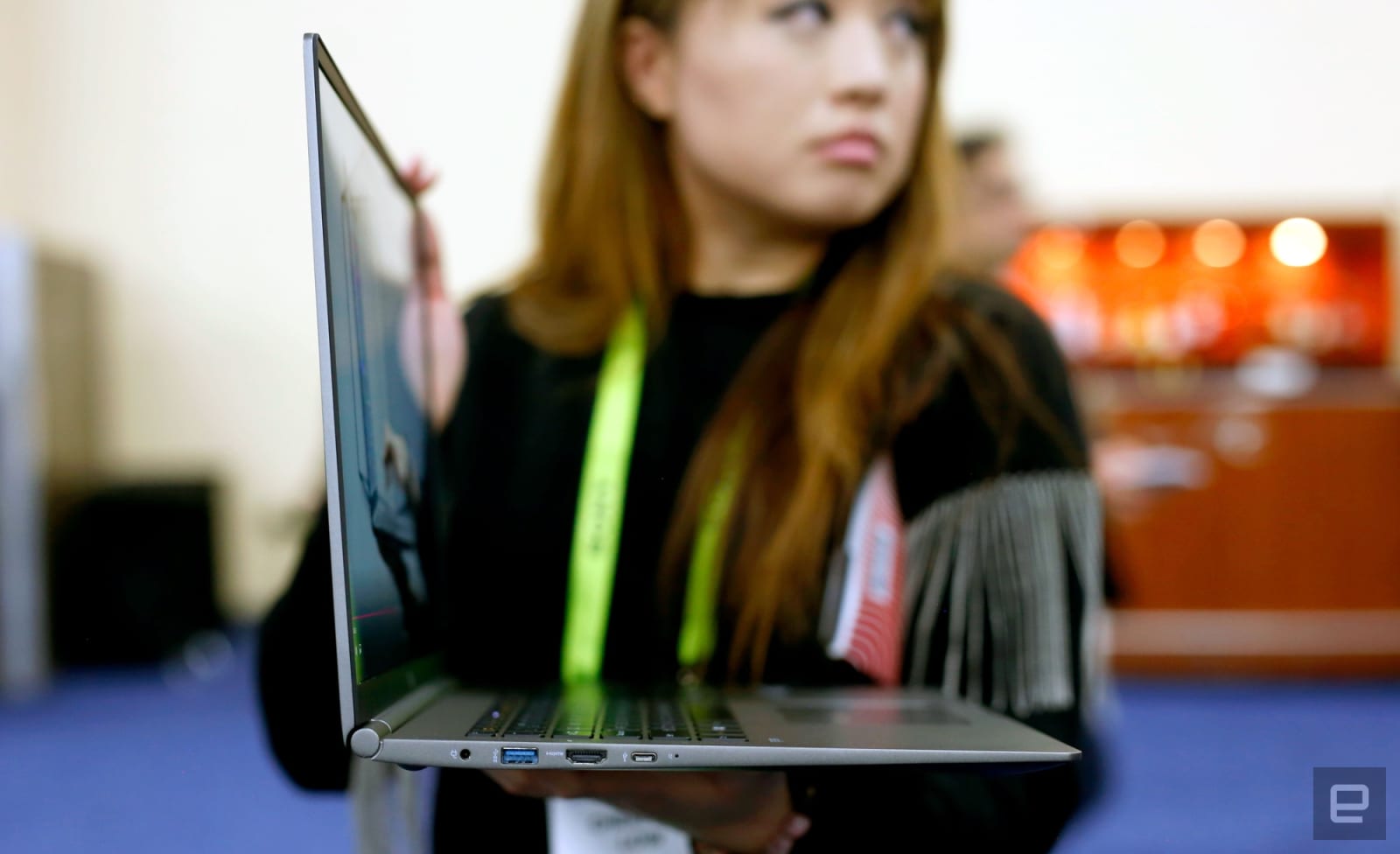 In addition to its thin profile, I also like the Gram 17's matte-silver case and classy logo on the lid. The laptop also comes in a white version, though we didn't get to see that here at the show. Despite being so thin and light, the Gram 17 is pretty rugged. It passed military-standard MIL-STD-810G testing for durability, which should provide some peace of mind, especially for something that feels almost flimsy.

Super thin laptops are becoming commonplace, and even the beastly gaming machines that pack graphics muscle are getting thinner each year. Things like NVIDIA's Max Q design are making it easier to find lightweight notebooks with powerful guts. The 17-inch still beats existing devices on its size, but LG might want to look into upgrading the Gram's performance if it wants to keep being competitive. Still, at $1,699, the Gram 17 is a compelling mix of portability and performance that might find an appreciative audience.