It's all about getting the biggest bang for the fewest bucks.
C. Velazco|01.08.19
@chrisvelazco

CES isn't really known for its surplus of smartphones, but a few notable new options do pop up from time to time. This year's set of affordable phones comes courtesy of Alcatel and TCL, which just announced its updated 1X and 1C models -- just be aware that only the 1X is coming to the US.

You might remember the 1X as one of the few Android Go edition phones to land in the United States, but Alcatel switched up its priorities this year. The updated 1X instead runs with a quad-core MediaTek chipset and 2GB of RAM, which means it comes loaded with a full-fledged build of Android 8.1 Oreo instead. Frankly, that's fine by us: considering how inexpensive Alcatel phones can be in the US anyway, it's really no surprise that the compromises that Android Go brings to the table might not make sense around here.

In any case, the 1X is actually pretty impressive considering it's meant to cost around $120 when it launches in early 2019. There's a 5.5-inch, 18:9 FullView LCD display here, and it's honestly one of the nicer screens I've seen on a cheap phone -- colors were bright and plenty vivid, and its ample viewing angles mean you get a solid sense of the action even when you're looking in from off-angle. Then again, TCL's whole thing lately is using its TV-making expertise to craft better smartphone displays, so maybe this shouldn't be a surprise.

The 13MP/2MP dual camera around back isn't bad either, though you'll definitely want to keep those expectations in check. The handful of portraits we shot were better than passable, but in general, our photo results were pretty middling. At the very least, though, there's enough horsepower here to let you change the level of bokeh in your portraits after you've already taken them. And that 5MP front-facing camera? Again, it takes some serviceable selfies, but don't hope for much more than that.

If you live in the right markets, you'll also find that your 1X has a rear-mounted fingerprint sensor, though you might not be using it that often thanks to the phone's Face Key unlock method. TCL says it's pretty secure since it tracks more than 100 data points on your face before letting you in, but let's be honest -- at this point, you can't expect face unlocking on devices this inexpensive to be absolutely hack-proof. Throw in 16GB of storage, a microSD slot that takes cards up to 128GB and a noticeable lack of bloatware and you're left with feels like a remarkably solid choice for smartphone shoppers on a budget. 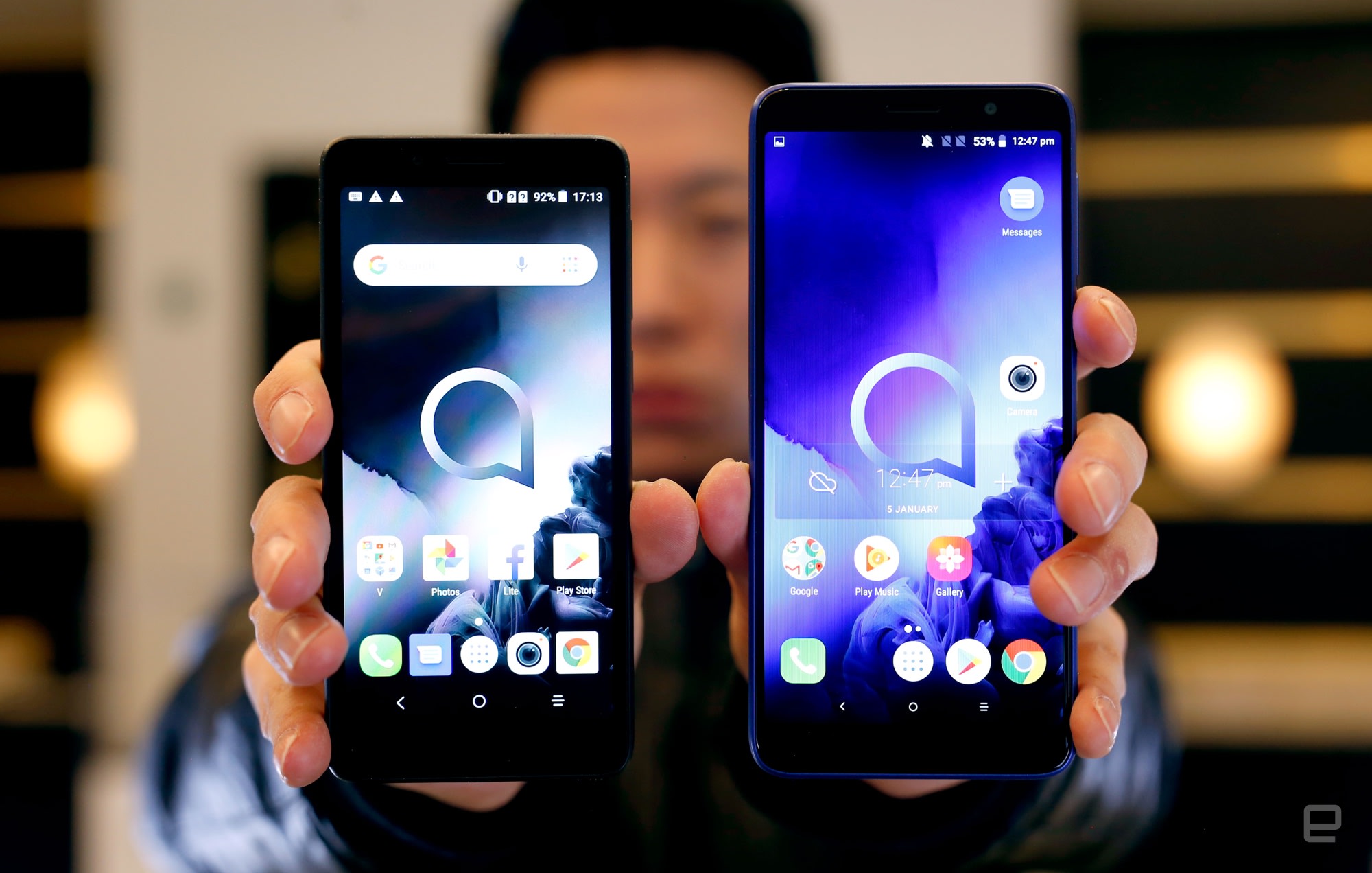 Then there's the Alcatel 1C, which replaces the 1X as the company's main Android Go edition phone. As you'd expect, that means we're working with very modest specs here: think a 5-inch screen running at 960 x 480, a quad-core Spreadtrum chipset (there's a name you don't see everyday), 1GB of RAM, 8GB of storage, a microSD slot that accepts an additional 32GB of storage at most, and a 5-megapixel main camera. If that sounds hard to get worked up over, well, that's sort of the point: it isn't meant to wow, it's meant to make modern Android features like Google Assistant available to just about everyone.

The company told us that its first Android Go edition phone did surprisingly well in markets like Latin America, Africa and Eastern Europe, so a sequel was inevitable. And more importantly, the actual experience of using this pared-down OS has improved since the early days, too - TCL worked with Google to sand down some of the system's rougher edges, and while the changes were ultimately minute, the 1C does feel a touch snappier than the original 1X. Prices for the 1C will vary by market, as will its launch dates, but you can count on one thing: this thing won't set you back very much.