Spryng is tech-laced compression wear for speeding up workout recovery

If you wanted to simplify, CES 2019 could be neatly divided into self-driving cars, giant TVs and health tech. A lot of what we've seen of the latter either tracks your movement or is hardware ingrained into workouts. Spryng is a little different, aimed at speeding up your recovery, reducing muscle soreness by stimulating blood circulation. While looking like an unassuming pair of chunky shinguards, these tech-laced wraps expand and contract around your calves, improving blood flow and feeling very nice in the process.

The startup showcased the portable muscle recovery tool at CES, and it's backed up by several scientific papers that elaborate on the medical applications of active compression. On the Spryng, there are three different intensity modes and patterns, but the focus is more on active compression, affecting your circulation in a positive way, rather than the wonderful massage feeling the Spryng conferred to my worn-out legs.

The jury is out on compression tights and tops (but if it makes you feel better— why not?), but compression therapy has more tangible benefits to blood circulation issues, like deep vein thrombosis, diabetes and more.

That was apparently the initial aim for this wearable, and the startup is looking to pick up FDA approval for a Class 2 device (it's currently Class 1) so that the Spryng can be used in a medical context. Interestingly, the degree of massage for medical usage is actually less than the settings used for recovery.

I may have over-zealously leapt into some fitness-based new year's resolutions the weekend before CES started. Too many squats or deadlifts means suffering was just one sleep away. With some very stiff hamstrings, I tried used the Spryng to aid my recovery. Depending on your choice of pants, while a little bulky, both wraps fit under looser trousers. They inflate only a little externally, but the internal force is surprisingly powerful. 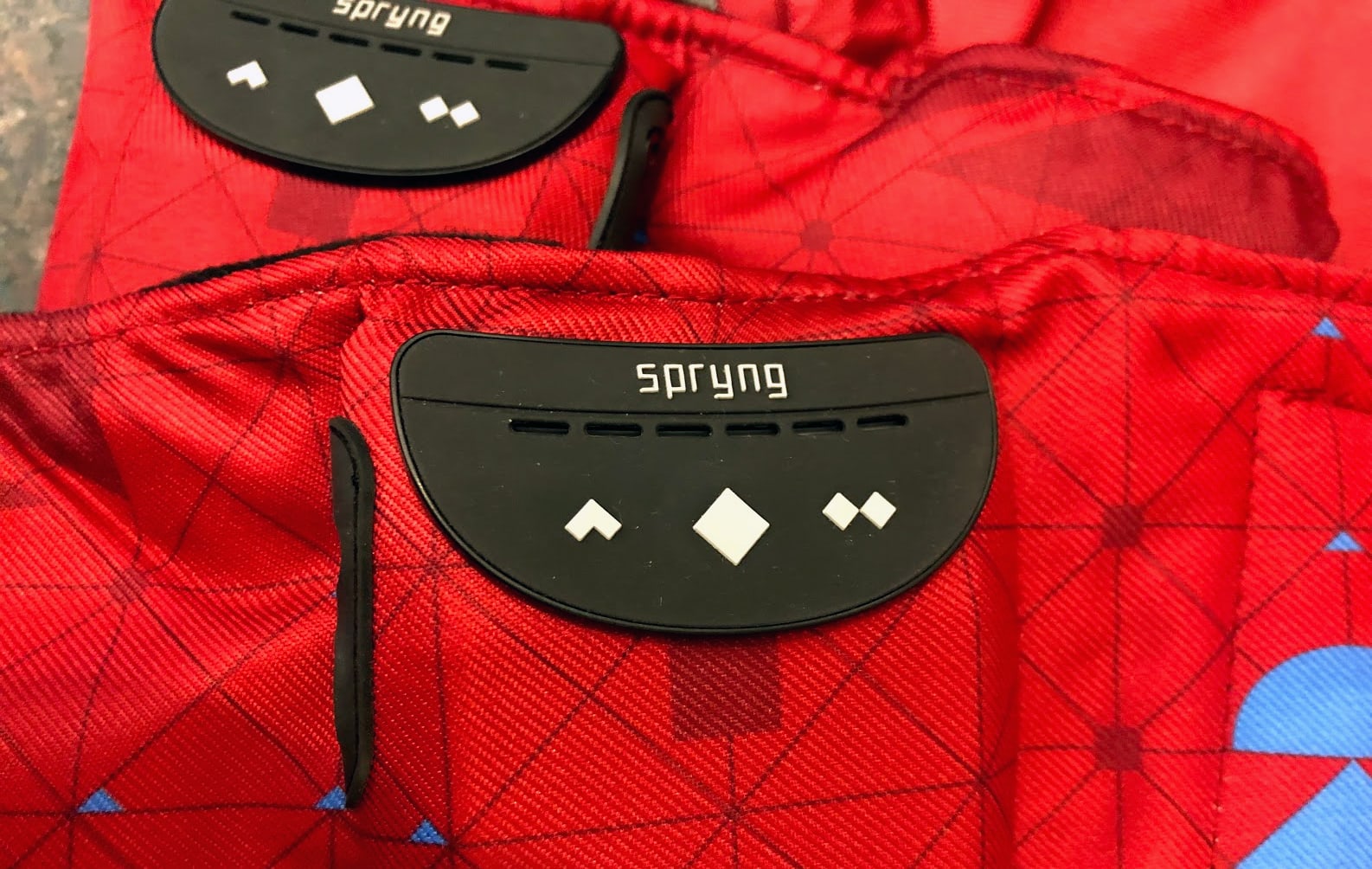 "It's pretty simple. It focuses on the lower limbs, as the calf muscles are responsible for pumping blood back up to the upper body and the heart," said Spryng's "Chief of Recovery", Heshika Deegahawathura.

He notes that existing compression solutions from medical manufacturers are bulky, and not all that accessible. According to the team, Spryng is for "day-to-day runners". The main theory is that by pinpointing the calves, the benefits transfer to your circulatory system as a whole. Deegahawathura adds: "[Runners] don't want to stay around to recover, they want to go out after they've finished their run. They want to go have a drink, do something else."

With an infrared emitter and receiver on the pair of wraps, they can be used synchronized or on their own, and you're free to walk around, sit, or stand while they're working. I think there's a lot of benefit to the therapeutic feel of the device -- it's not excessively aggressive, and felt like my calves were being massaged. There's a charging port and while there is a Bluetooth radio, the team isn't yet offering a companion app with remote controls.

Some of the studies done regarding active compression suggest it can improve performance up to 50%, but think of that as the best possible scenario. My aching legs did feel better, but there's limits to how much compression can aid recovery. Anything that helps is a good thing, however, and the Spryng came into its own after we'd spent an entire week marching around exhibition halls in Vegas.

Priced at $129, the wearable is on sale at Spryng's official site.