Tech and tariffs in Sin City

Last week, tens of thousands of people flowed through a congested walkway on their way to see the latest and greatest tech at the Consumer Electronics Show. In years past, this hallway, which connects the Central Hall at the Las Vegas Convention Center to the South Hall, was generally free of any displays, with just a few couches pushed up against the wall. This year, however, a giant phone sat near the middle, off to the side of the aisle, with an approximately five-by-three sign proclaiming "Tariffs are taxes."

It's Thursday afternoon, and Bronwyn Flores, a policy communications specialist for the Consumer Technology Association (CTA), has been manning the stand for almost two days. From 8AM to 6PM, she urges passersby to email their government representatives from the kiosk. Throughout the convention's other locations in Vegas, roaming staff carry iPads to member lounges to seek out participants. They were also out in full force at the member kick-off party on the first night of the show. The mission is straightforward: get people to send messages to their representatives about how tariffs hurt their livelihoods.

The CTA tried to make the process as easy as possible for attendees. Whether at the kiosk or via an iPad, all someone has to do is scan the QR code on the badge that hangs around their neck. The system, created by digital advocacy group Phone2Action, automatically pulls the attendee's particulars and displays a pre-populated form, complete with suggested message. Based on the individual's residence, Phone2Action addresses the letter to the relevant government representative. If you don't want to add the details of your own experience, you can just hit 'send.'

The small station at the South Hall corridor is fairly easy to miss, especially if you're rushing to a business meeting or an appointment. Still, Flores and her colleagues had helped send over 100 emails from the kiosk in under two days. 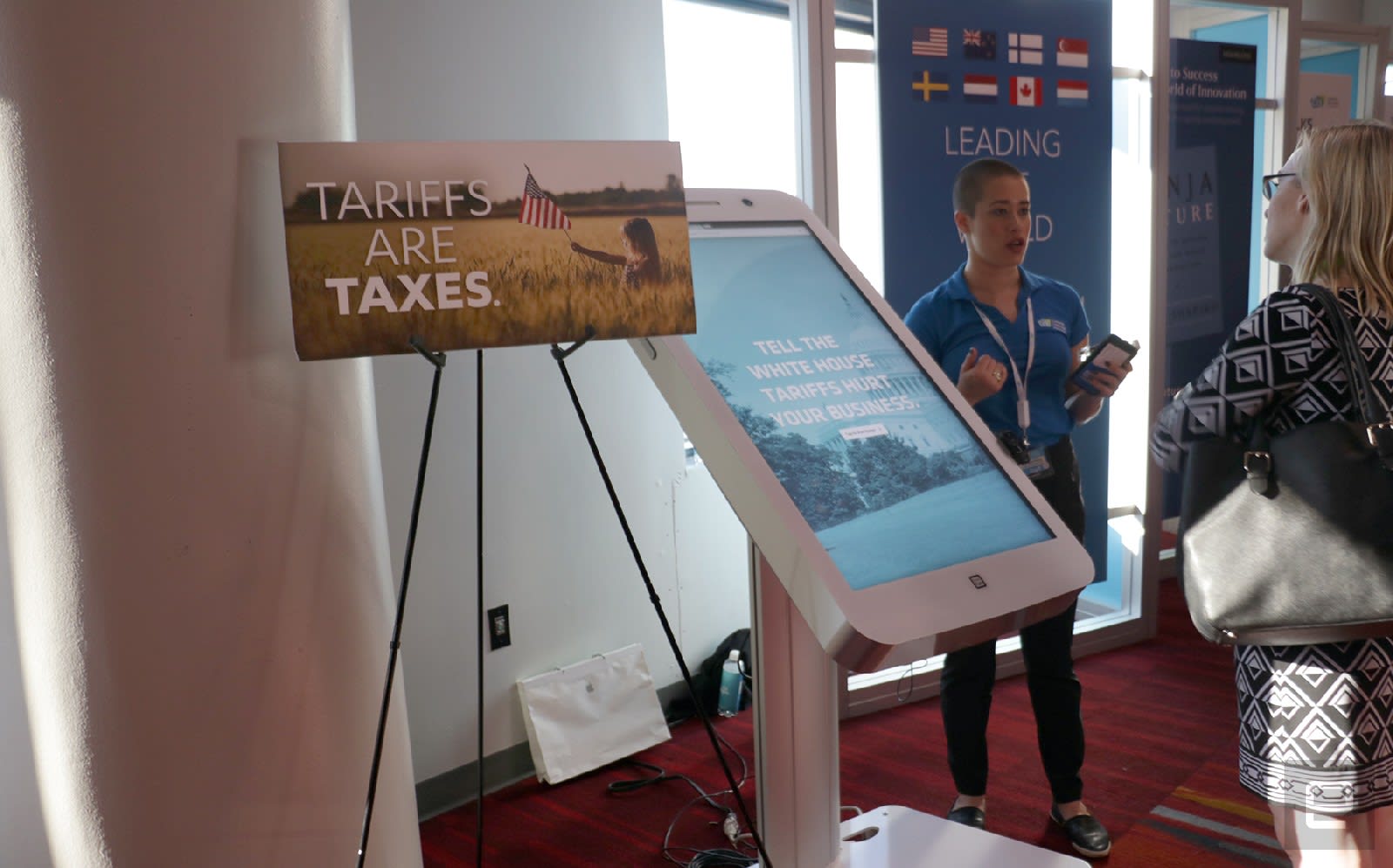 This was a different CES for Flores. Normally, policy work takes up most of her year, and CES is a break of sorts, where she mostly deals with media requests and helps facilitate interviews. This time, she spent the majority of the show reaching out to member companies to try to get them to talk to the press or share information that would help the CTA in its lobbying. "The CTA can talk, but we want them to tell their story," she told Engadget.

Matching its efforts on the ground, the CTA published a number of statistics to hammer home its point. US businesses have paid over $6 billion in tariffs since October last year, and the American technology industry is on track to pay $1 billion a month in tariffs moving forward. The officials deciding what to do with tariffs or which companies to exempt are well aware of these numbers. "What's really driving it home are those personal stories," Flores said.

Since the first list of tariffed goods was released, the CTA has been hard at work lobbying DC on behalf of member companies. "We went out. We got the input from our companies. We went and testified on the abbreviated version of what that report said," Chandler said. That got a few products off the list -- like TVs. A second list was drawn up to make up for the shortfall from removing the earlier products, while a third list arrived after China imposed its own tariffs in retaliation.

"We told that story so loud, they just got that exempted."

"For every single list, there's been a hearing and a submission," Chandler said. "I've testified at every hearing, arguing the companies' voice," she added. The CTA also encourages business owners to tell their own stories, and sometimes flies them to Washington DC for the hearings to testify. "It's almost when companies seem to be at wits' end, and there's nothing left to do, then they start getting loud," Chandler said. "And I think companies are starting to really get enough of this."

The CTA has had some small victories over the course of its efforts. For a CB radio-maker, Chandler said "We told that story so loud, they just got that exempted." Another member company that creates connected home devices was also able to get one of its products taken off the list.

There are still plenty of companies that are shy about speaking up. At CES, my colleagues and I trekked to the South Hall to speak with representatives of smaller companies that have been affected by the tariffs. We had little luck getting the people at the smallest booths to say much, with the general sentiment being they were concerned about facing reprisal from Beijing for speaking with journalists. But to our surprise, many companies with medium-sized booths from both China and the US were happy to go on the record. In fact, many of them were emphatic in their response.

"It's a tremendous headache," said Alex Camara, CEO of Seattle-based audio electronics company AudioControl. Camara and his team assemble in the US, but buy parts from China and saw an immediate increase in costs from the initial round of 10-percent tariffs. AudioControl sells its products to dealers who then sell to consumers, and any price increase Camara applies will be compounded by the middlemen, translating to a massive jump for consumers. Camara has been trying to avoid hiking prices, which means he has to find other ways to cut costs.

"We are spending a disproportionate amount of time on understanding issues with tariffs, from how to change our supply chain, to our own manufacturing in the United States, to working with lawyers on understanding potential paths that we can go down to try and help," Camara said.

Similarly, Vicki Mayo, owner and co-founder of Touchpoint Solutions, has been avoiding passing on the cost to her customers. TouchPoint Solutions makes a wearable intended to provide stress relief, and Mayo said it's hard to find a manufacturer stateside that has experience making and miniaturizing wearable medical device components. "The cost is an issue, but quality is a bigger issue," she said. She's continued to get her parts from her China source and is absorbing the tariff.

"I either have to eat it, split it or pass it on."

"I feel like I'm doing a disservice to people if I can't offer them an alternative to medicine at an affordable price," Mayo said. She will have to make major changes if a 25-percent tariff does go into effect. "Right now, we have enough inventory to be fine for some time," she said, "Come February, we have to plan whether to come back onshore or take the hit." If they increase their prices, companies will lose their competitive edge, especially against massive businesses better equipped to deal with the tariffs.

Eric Bodley, founder of fibre-optic-cable maker Future Ready Solutions, is at a loss. "If I get whacked with a 25 percent or 10 percent, I either have to eat it, split it or pass it on," he said. For his last order, which he said wasn't very big, "I paid $9,000 in pure money that I don't really know how I'm going to charge anybody for."

Passing the cost on to the consumer might mean losing customers. "It's like, 'this company is too expensive now, so I'm going to go over and buy everything [at a larger company]', and they don't come back," Bodley said.

Small businesses have also had to dedicate a significant amount of time to figure out how they'll be impacted and investigate possible solutions. Kyle Schaeffer, AudioControl's head of supply chain and operations, said "I feel like I cannot spend enough time on it to really find a really good solution."

Time is a wasted resource in this endeavor. "Nobody's paying me for all the time it takes to deal with this," Bodley said.

Another common sentiment is a crippling sense of uncertainty. It's prevented Camara and Mayo from feeling optimistic about being able to grow their companies at the rates projected before the tariffs happened. In fact, Camara thinks he might not be able to hire as many new people as he had intended this year. 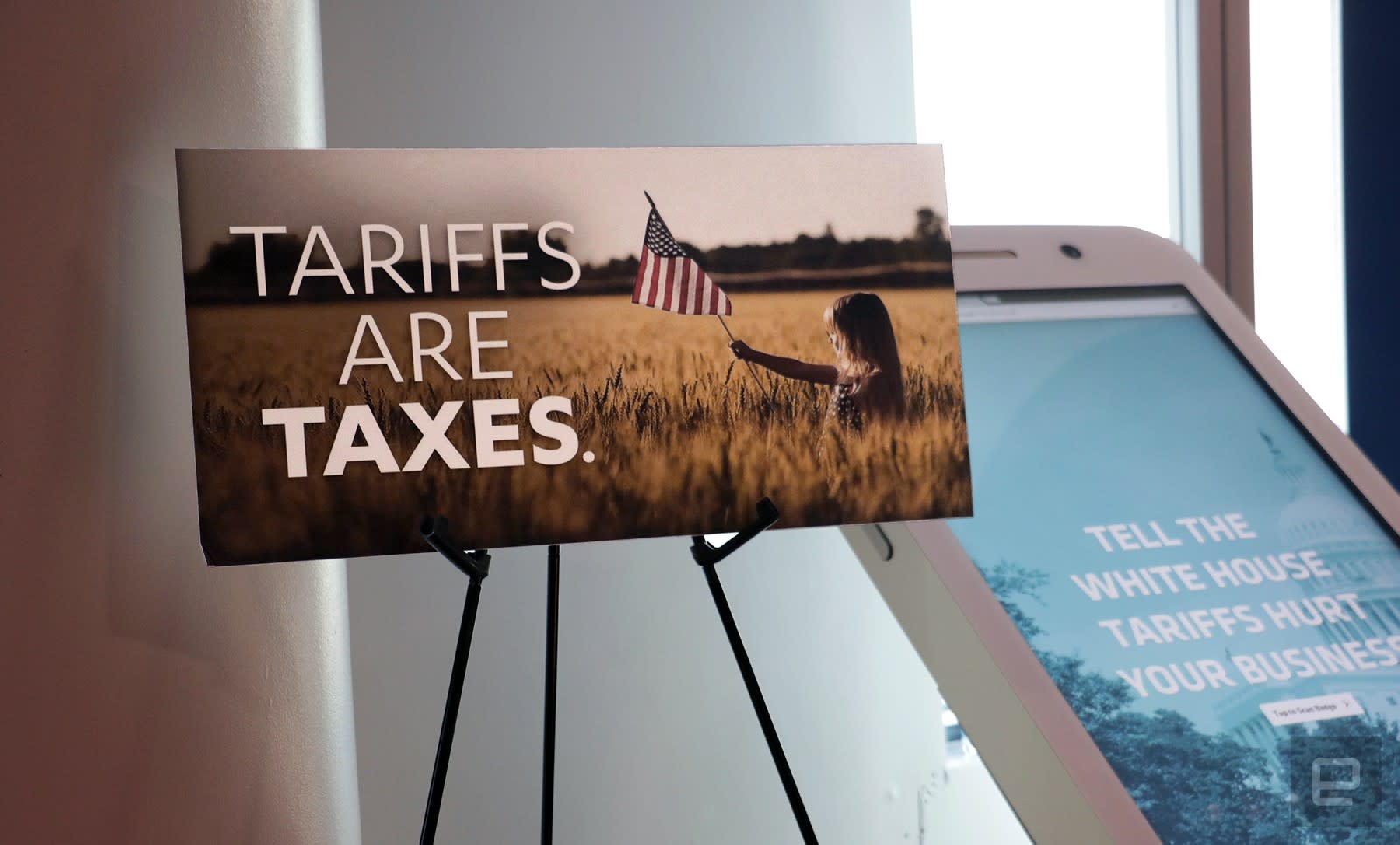 Despite the frustration, all the US companies I spoke with said they understood the desire to even out the imbalanced trade relationship with China. "I feel that for many years we have allowed China to be not as transparent or as fair," Mayo said.

"From the macro perspective I see that. It's important that every country treat every country with respect. I think that's what Trump and the administration is doing," she added.

Camara agrees, but questions the way events are unfolding. "We totally understand the reasons why the government is looking at how to create a better balance of trade," he said. "We just want to make sure that we're not knee-jerking into that situation."

"When elephants fight, the ground gets trampled."

For Bodley, it's important to consider the cost of the trade talks. "I understand a negotiation tactic is playing hardball, but I think there's going to be a lot more collateral damage," he said.

As Gary Shapiro, CEO of the CTA, told me on stage at the show: "When elephants fight, the ground gets trampled. And the ground are people in both China and the US."

It's unclear what can be achieved from the ongoing talks between the US and China. "I'm not convinced or know that President Trump even wants to deal with China," Shapiro said. The CTA's work is important, but it is up against a unique administration. "It is one where you only have to convince one person, and that person has a limited amount of information coming from a very limited number of sources," he explained.

In a situation like this, it's tough to gauge how successful lobbying efforts can be. "I know (the CTA) is advocating on behalf of the industry," Camara said. "My impression is that obviously there's only so much they can do." He noted that the CTA has been helpful in providing information about the tariffs.

Chinese companies, for their part, also seem to be trying to work with their government towards a meaningful resolution. Wenjuan Li, Marketing Director of Made In China, told Engadget she had been engaging the government and advocating for an end to the trade war. "We just want to do business," she said. Companies are also helping each other out where possible, according to Breswell Su, sales manager at a Shenzhen-based electronics conglomerate. 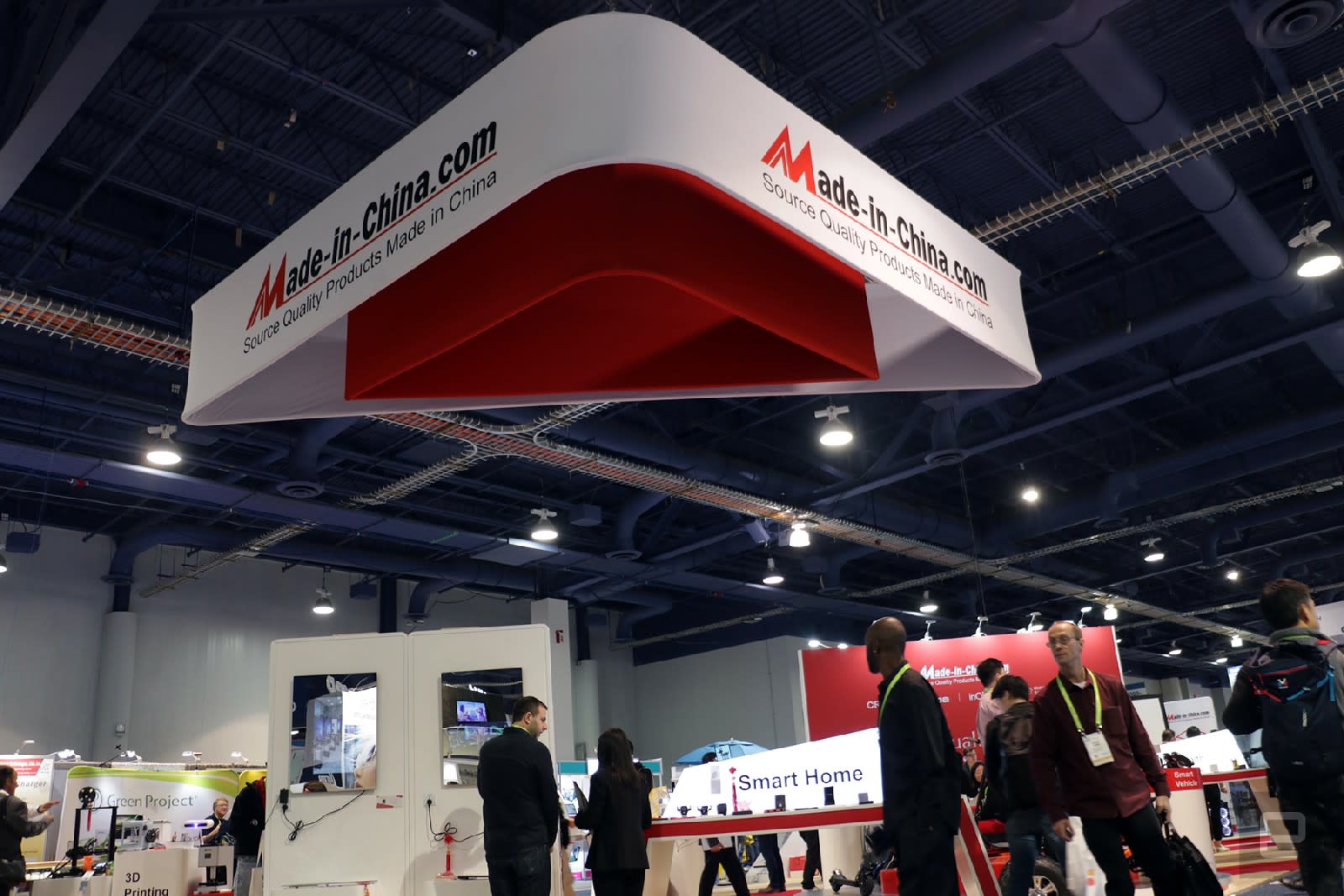 The small businesses in both countries aren't the only ones impacted by the trade war. "This is a global issue. And right now the global economy is clearly weakening a lot," Shapiro said.

CES is not only an electronics show, it's a manifestation of international trade. Despite the politics and uncertainty, the show must go on, and so must trade. Major Chinese companies like Huawei and ZTE have already signed up for CES 2020, according to Shapiro. When Flores returns next year, hopefully she will be going back to her usual break from policy work. In the meantime, the advocacy continues.