A guitar three years in the making.

I'll admit that when I opened the guitar case of the Acoustasonic Telecaster I immediately thought of the toy guitar my parents gave me when I was four years old. With a small hole in the center of the body, it looks unlike anything out there. Well, except that plastic toy that somehow snuck its way into the recesses of my memory. Then I picked it up and strummed and... no this is not a plaything. This is a seriously impressive instrument that will more than likely win over skeptics once they start playing.

The $2,000 Acoustasonic Telecaster is the first in a series of American Acoustasonic guitars that put the sounds of an acoustic guitar into the body of an electric guitar. It sounds simple enough, but in reality, there's a very specific sound that needs to be produced by an acoustic guitar and recreating that in the smaller body with far less volume than a traditional acoustic took time and lot of research.

It's something Fender's VP of acoustic and Squier divisions Billy Martinez has been thinking about for 15 years. But it wasn't until recently that its development got fully underway. "The journey started literally three years ago, it started two weeks after I started here at Fender. it was basically, how are we going to take the technology of an acoustic guitar forward into the future without losing the organic traditional vibe and feel to it," Martinez said.

One of the issues with acoustic guitars is amplification. Guitarists can either get a guitar with a plug and connect directly into the PA (or acoustic amp) or place a microphone in front of the instrument. Both have worked for decades, but if you have a certain sound you want that involves a pedal or overdrive, it's tough to get it right on stage and you always run the risk of feedback. 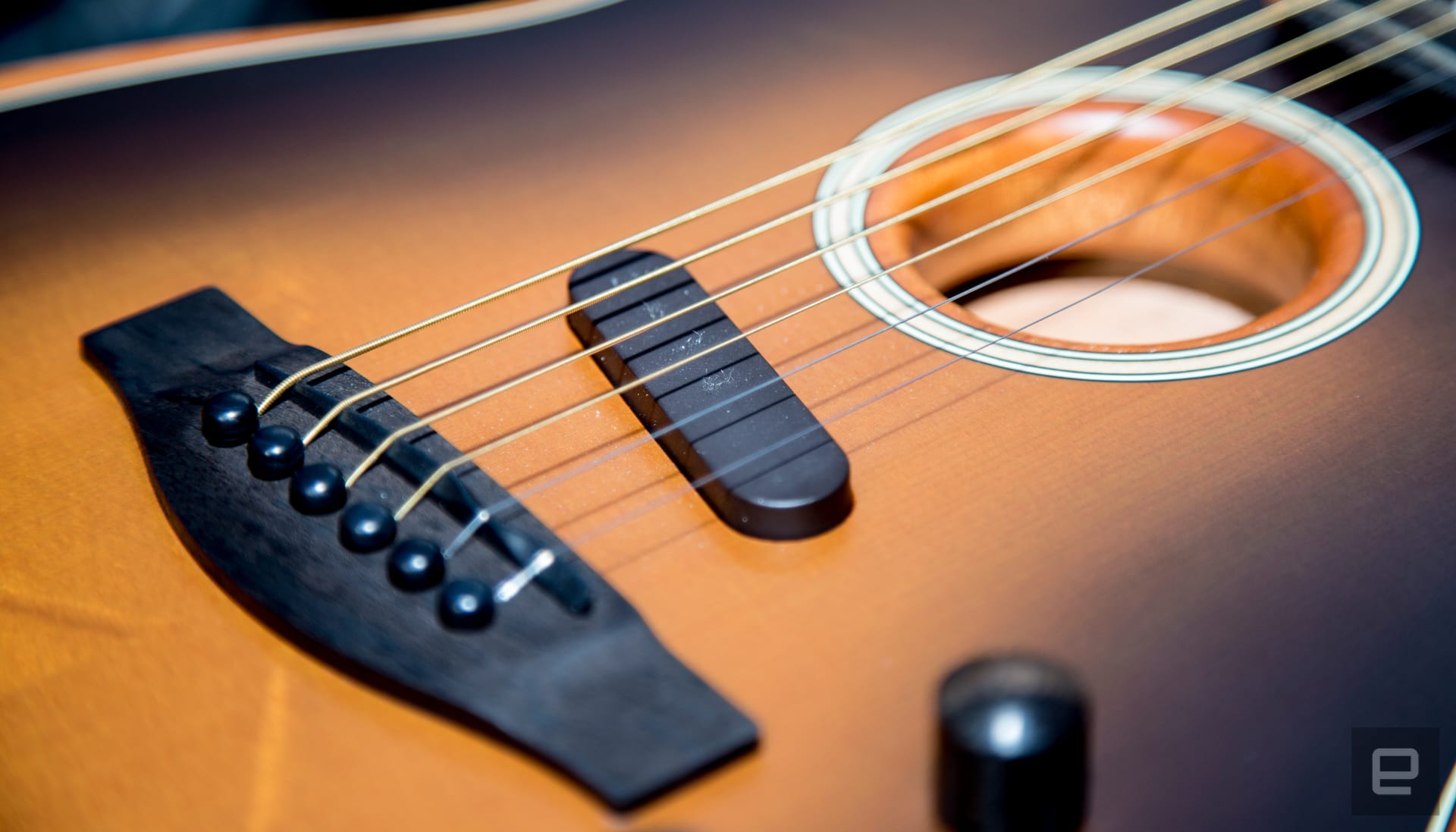 The Acoustasonic Telecaster eliminates those issues and I plugged into multiple amps (solid state and tube) and ran it through a series of random pedals without worrying about my band's practice space becoming a den of low-end humming feedback.

It sounds like someone has placed a mic up to a traditional acoustic guitar but you have the option to switch to electric whenever you want to kick out the jams.

Fender went through four different proof of concepts to get to where the guitar sounds like it should when not plugged in. They needed to work on bracing and adjust the depth of the sound port so that it projected the noise coming from the instrument. It sounds like you're playing an acoustic. That's not a small feat. But there was more work to be done.

The guitar as is does 55-65 percent of the work according to Martinez. To make it play well with all your amps, it needed some DSP (digital sound processor) help for the "Acoustic Engine." "First and foremost, we use the analog side of things first, which actually helps with not only the way the electronics work but also allows us to not have latency as you're switching between positions," Martinez said.

The result is a guitar that sounds like a traditional acoustic guitar with a variety of different mic and amp setups all available via the five-way switch. All that processing takes a lot of juice and the soundboard uses a rechargeable lithium-ion battery (like the one found in your smartphone) for power. It recharges via a USB port, which at first seems odd, but then makes sense because we all have that cable and most of us have a battery pack. A four-hour charge will give you about 20 hours of play time. But even if you forget to power it up, the Acoustasonic Telecaster quickly found its way into my rotation. 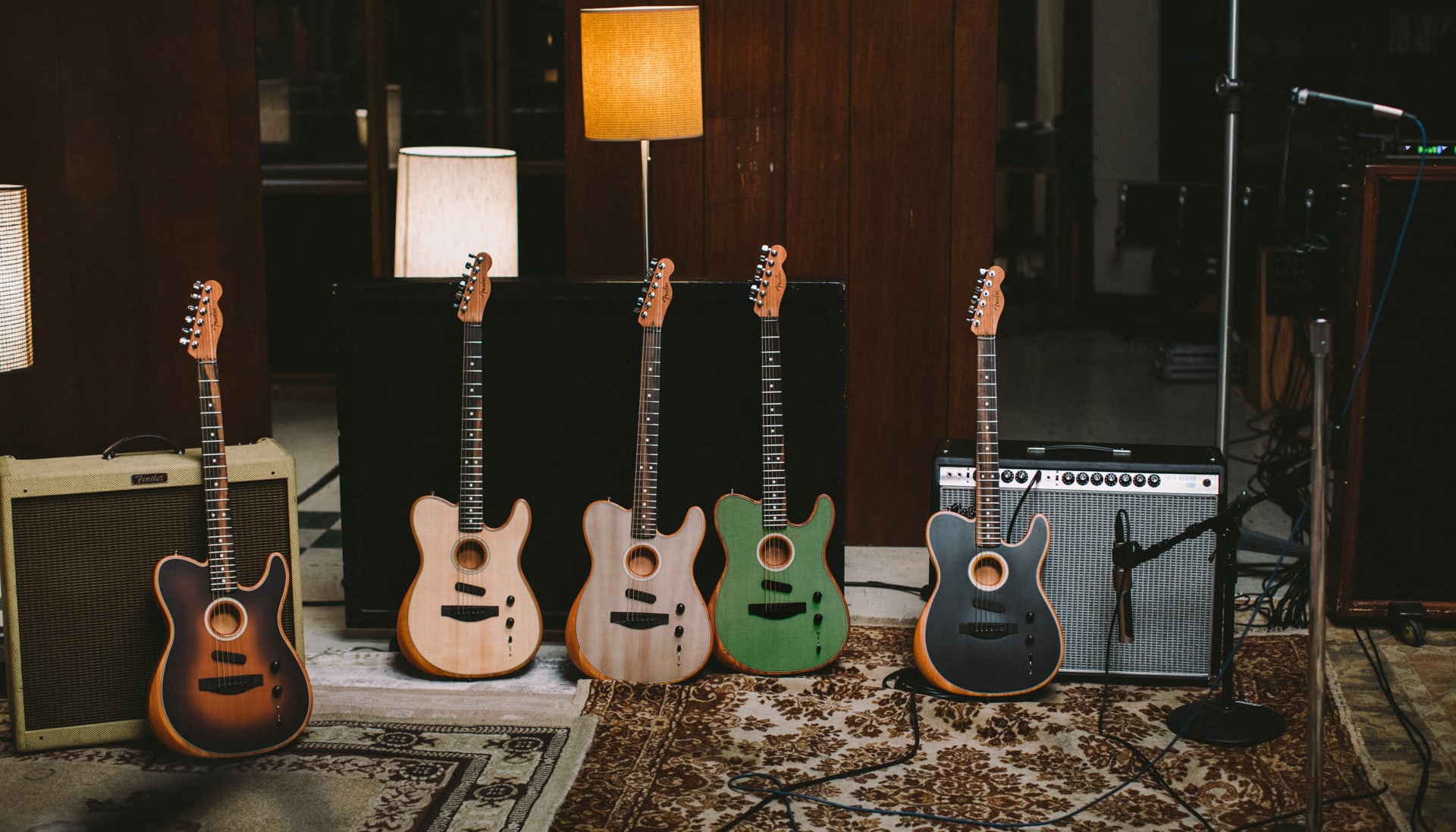 I also ended up using the guitar to practice on the couch. I live in an apartment building and plugging in an electric guitar is a one-way ticket to getting the stink eye from my neighbors and a call from the landlords. Typically I use an acoustic guitar, it's big and bulky and it works, but I don't use one on stage. The Acoustasonic Telecaster, on the other hand, was more comfortable to sit back, relax and practice with.

It's light, has the action you would expect from a Tele, sounds great and probably couldn't have been made 15 years ago when Martinez first started thinking about it. Manufacturing something like this requires a lot of technology and know how. "It took us minimally two years just to even get the cavity right. That speaks to the innovation that was needed in order to get this to the next level," Martinez said.

If I remember right I had a lot of fun with that toy guitar when I was four. Neither of my parents are musicians so there's a good chance it's what sparked my love of being on stage and playing music that I adore. Sure the Acoustasonic Telecaster resembles that childhood memory, but it's an impressive feat of technology that'll impress any guitarist that picks it up. It's the versatile guitar that you can play during the entire gig and sound great doing it. It's two (maybe three) guitars in one. More importantly, it's the guitar you'll want to play.