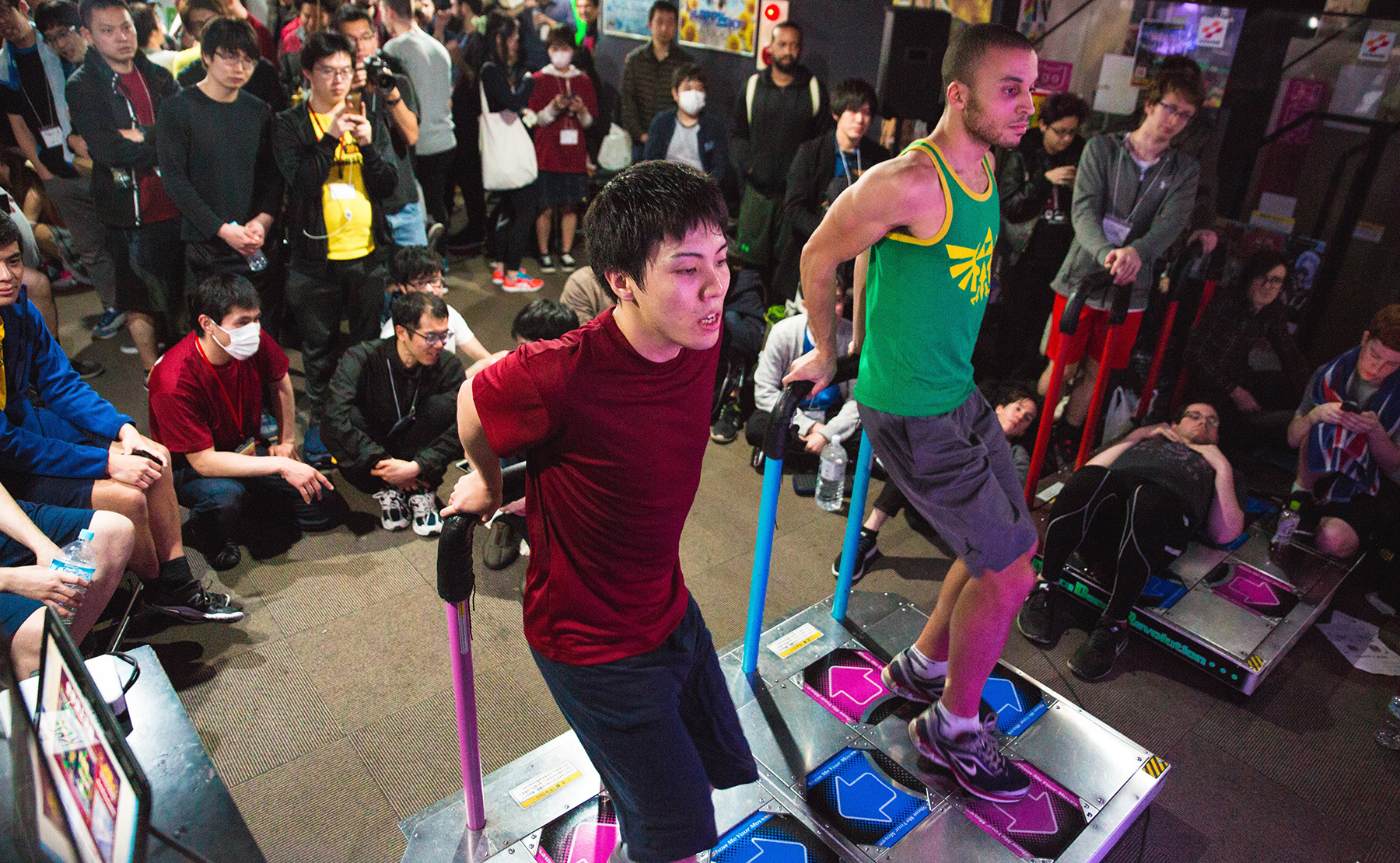 Even in a packed arcade, David Maiman stands out from the crowd. He's wearing a black T-shirt with multicolor DDR arrows darting across the front, his long, dark hair curling down to his shoulders. As he walks into his local arcade in suburban Long Island, he's almost like a celebrity, shaking hands with the manager, snapping selfies with fellow players and cheering on his friends as they set high scores.

"Rhythm games are social," says Maiman, traces of a New York accent in his voice. "That's what makes DDR, and our community, so special."

For a little over a year now, Maiman has served as a DanceDanceRevolution (DDR) pied piper of sorts. Under the collective name RhythmCore Gaming, he and a few friends have been hosting DDR tournaments, meetups and community outings at local arcades throughout the Northeast. His most recent tournament, held in Middletown, NY -- a sleepy town about two hours outside Manhattan -- drew a crowd of more than 80 attendees.

With the release of Dance Dance Revolution A in North America in late 2016 -- the States' first major DDR release in nearly a decade -- Maiman has noticed a renewed interest in the once-venerated arcade series.

"What I've learned, quite simply, is that anytime you say, 'Let's have a DDR meetup,' people will come," he says. "Just create a Facebook event and post about it on DDR sites, and boom: It's a chain reaction."

"It's sort of like we're in a secret society," says Damonte Salkey, one of Maiman's RhythmCore partners. Even fighting games, once a similarly niche, grassroots community, have gone corporate, now boasting major TV coverage and prize money.

"I sometimes look at tournaments like EVO and get a little bitter," Salkey continues, "because I feel like DDR should have that same experience. But that's what we're working towards." With zero support from Konami, the game's parent company, American DDR competitions are entirely passion projects: Maiman and other organizers sometimes spend hundreds of dollars out of their own pockets to host each event. But they are dedicated to growing their communities, and prominent coordinators across the country are tackling as many small towns and regions as possible.

There's David Seltzer in Texas, David Hua in California and Anthony Capobianco in the Midwest, just to name a few, all ensuring that tournaments are held from Fresno to Grapevine, Urbana to Columbus. Some organizers even host tournaments out of their own homes, spending thousands of dollars on arcade cabinets for the benefit of the community.

These private cabinets are typically well maintained and offer a nice change-of-pace from local arcade machines that are sometimes left in disrepair. For example, the DDR at Dave & Buster's in Times Square is notorious for its malfunctioning dance pad. "There's only one machine in Midtown Manhattan," one gamer lamented, "and it's the worst-conditioned thing on Earth!"

Steve Foster, another member of RhythmCore, recalls a home tournament he attended in New Jersey a few years ago.

"The competition was intense, but one benefit is that time management wasn't an issue," he explains. "Arcades can sometimes kick you out if your tournament doesn't finish promptly... but at a house tournament, you'll say, 'If we don't get this done by 3AM, how about we just go to sleep and finish this tomorrow?'"

Over the past year or so, local DDR tournaments, at either homes or arcade venues, have increased to the point where there's seemingly a new one every week. This steady stream is paying off, as tournaments continue to draw larger and larger crowds. For example, Raj of the Garage -- a major tournament in the Midwest -- started out in 2014 as a competition literally in someone's garage but has since expanded into a three-day extravaganza at the Hyatt Regency Columbus, featuring 90 DDR competitors and 800 total registrants playing a wide range of arcade games.

Seltzer's Big Deal tournament in Texas grew from 80 competitors in 2017, its inaugural year, to 200 in 2018. And the DDR Storm event in Florida made waves in 2016 when competitors brought their own personal arcade cabinets to help the tournament run as smoothly as possible.

"These are private arcade owners hauling in their cabs, at cost, just for the sake of the community," says Seltzer. "And they generally operate in the red. They're spending their own money, but it's out of passion." 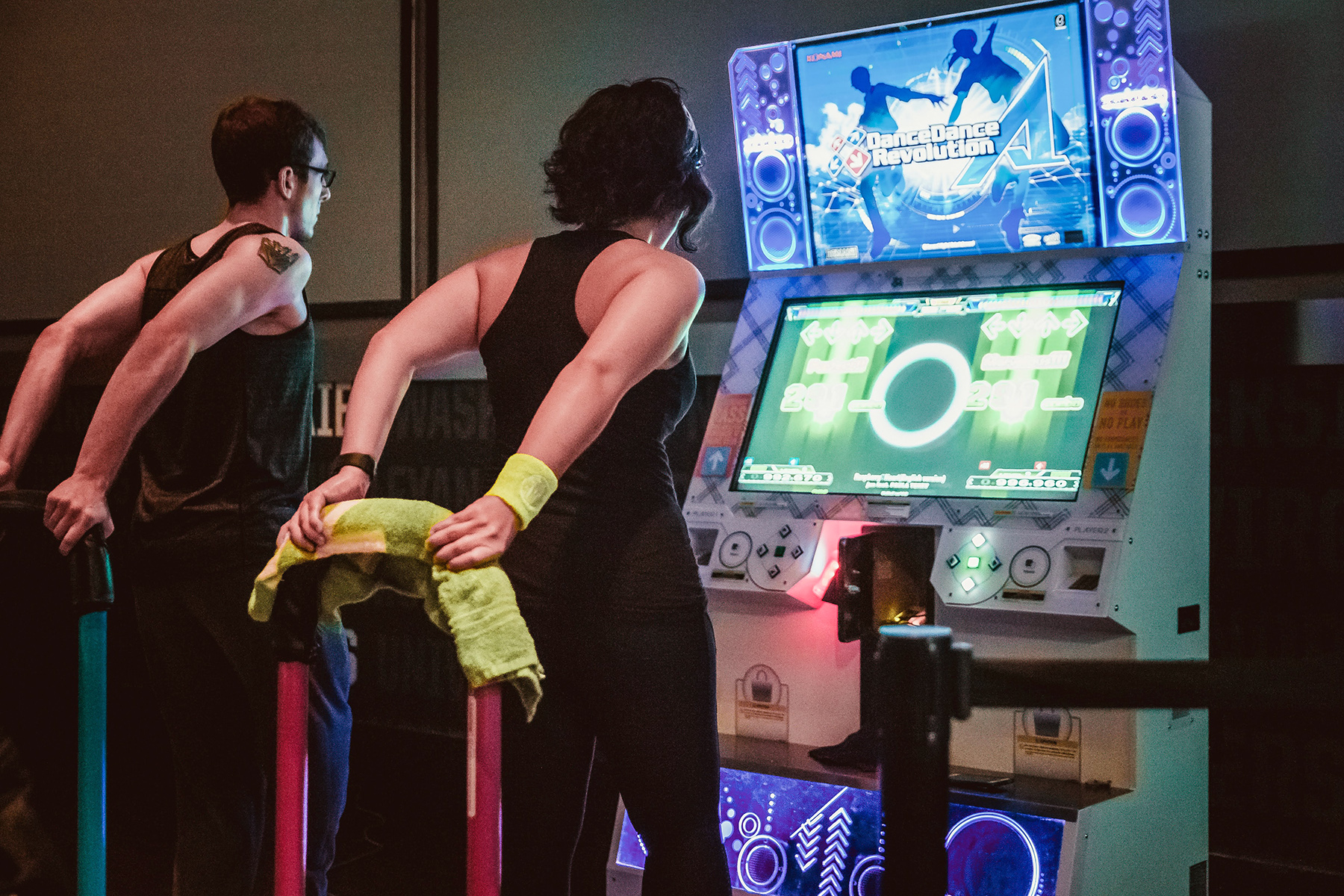 “They're spending their own money, but it's out of passion.”
David Seltzer

Most DDR organizers attribute the grassroots community's recent growth to two main factors: Konami's decision to release DanceDanceRevolution A in North America and the emergence of Round1, a Japanese arcade chain that has been aggressively opening locations throughout the USA. Round1 currently boasts 29 American locations in 21 states, with plans to open 50 stores by 2020.

Significantly, Konami also began allowing US competitors to participate in its annual Konami Arcade Championship (KAC) in 2017, opening up a whole new level of interest in the arcade classic. But although Konami uses the term "esport" in some of its KAC promotional materials, most DDR community members agree that it feels more like an exhibition than a true global championship.

"It not only feels like an exhibition -- it totally is an exhibition," says Hudson Felker, a longtime DDR competitor who was one of the first three Americans to compete at KAC. "It's a very small part of a much larger event, the Japan Amusement Expo," he explains. "You play two or three songs, it lasts an hour or two, and that's it. No double eliminations, no brackets -- nothing."

We've got all of the greatest players in the world already there ... why waste it on only an hour-long tournament with crappy rules?"

To remedy this, Felker tapped into his experience in the grassroots community to organize his own tournament: Extra Exclusive, which runs in Japan on the same weekend as KAC at an arcade down the block from the convention center. A group of more than 50 Americans will be traveling to Japan the last week of January to meet fellow competitors from across the globe, watch KAC and then compete or spectate at Felker's tournament.

"We've got all of the greatest players in the world already there for KAC," he says, "but why waste it on only an hour-long tournament with crappy rules? Last year's [Extra Exclusive] was probably the best tournament experience I've ever had, and seeing American players interacting with the best from Japan, Korea... it's just the coolest thing."

With the grassroots community growing in the USA, active players often debate where DDR should go from here. Some think Konami should step in and create a structured esports league; others think corporate sponsors, like Nike, should jump on board and support local efforts; and others think the game is simply too niche and the community should carry on as is, fueled entirely by players.

"Over the past few years, our community has doubled and tripled in size," says Felker. "So I certainly hope Konami gets more involved, because there's a lot of untapped potential here. With the community where it's at now, this is the time."

According to Felker, Capcom's professional eSports league serves as a perfect example of how this can be done well. But he remains skeptical of Konami and questions whether the company is truly invested in DDR.

"We've gone three or so years without a brand-new version," he says, "and although Americans are dominating the leaderboards, we often get the short end of the stick. To reach the next level, we'd need full and utter cooperation from Konami, and they've shown no interest."

Brittney Scott, an online organizer who hosts a number of women-only tournaments in the DDR community, suggests that corporate backing is not necessarily the best option.

"Having the tournaments run entirely by the players themselves is certainly an advantage," she says. "We understand better than anyone how the players want to compete."

But whatever the future has in store, organizers like Maiman will continue to focus on their local communities while occasionally taking a moment or two to dream big.

"Can you imagine the Barclays Center sold out to watch tons of competitors stomping around playing DDR?" Maiman asks, and he can't help but laugh at the idea.

Maiman's eyes light up as he takes out his cell phone to snap a photo of the hefty crowd gathered to watch his friends play DDR. At the end of the day, this sense of community is what matters most to organizers like him.

"I just want to have people here playing games with me," he says. "To see people enjoying themselves and spending time together, and knowing I played a part in bringing them together, is a special feeling."

In this article: av, dancedancerevolution, ddr, esports, gaming, gear, konami, longread
All products recommended by Engadget are selected by our editorial team, independent of our parent company. Some of our stories include affiliate links. If you buy something through one of these links, we may earn an affiliate commission.