The OM-D E-M1X has an updated image stabilizer, but not much other new tech.

Olympus has unveiled the OM-D E-M1X, a pro-level mirrorless camera with very rapid shooting speeds and an all-new image stabilizer that will help both video shooters and photographers. Teased earlier this month, it's essentially a larger version of OM-D E-M1 Mark II with some extra professional features, but not a lot of new technology (and a similarly awkward name). It packs the same 20.4-megapixel sensor and 18 fps shooting speeds (with AF and AE) as the OM-D E-M1 II, or an exceptional 60 fps with those settings locked.

Canon, Nikon and particularly Panasonic recently jumped onto the full-frame mirrorless train, but Olympus told Engadget it's not interested. "That's not the direction we want to go, that's not our core competency," said Olympus marketing director Nathan Lloyd. "Full frame doesn't answer everything. High speed, autofocus and performance is better on Micro Four Thirds. We also have a compact and lightweight solution."

The OM-D EM-1X's standout feature is a new 5-axis gyro sensor with the "world's highest image stabilization," offering up to 7.5 shutter speed steps of compensation. When married with a new electronic stabilization system, it also delivers much smoother video capture "without the need for stabilizing gear," Olympus said.

In another clear nod to pros, the OM-D E-M1X is heavily weather-proofed, thanks to "in-house splashproof tests that are far more rigorous than IPX1 water ingress testing," the company wrote. It's dust-, splash- and freeze-proof down to 14 degrees F (-10 C) even with the remote cable, microphone and headphone jacks attached. Dust removal via the "super sonic wave filter" is 10 percent more effective than before.

The large size of the OM-D E-M1X might be a turnoff for some, but not pro shooters who will appreciate the extra gripping area. The camera is also nearly identical to use whether you're holding it horizontally or vertically -- yes, there are duplicates of the joystick and other controls to give you the same experience either way. On top of that, it can handle two batteries, allowing you to take 870 shots and shoot around 170 minutes of video, easily besting most mirrorless cameras.

Even though the camera is large for Micro Four Thirds, it's still relatively lightweight compared to pro full-frame cameras like Nikon's D5 or the Canon 1DX Mark II. By way of illustration, Olympus also unveiled the M.Zuiko 150-400mm F4.5 TC1.25x IS Pro lens. With a built-in 1.25 teleconverter, it offers a focal range from 300 to 1000mm (35mm equivalent), but is a fraction the size of a full-frame equivalent lens. Olympus also unveiled a digital 2x teleconverter (the MC-20) that doubles the lens range to 2000 mm -- ideal for bird shooters -- albeit at a cost in a brightness. 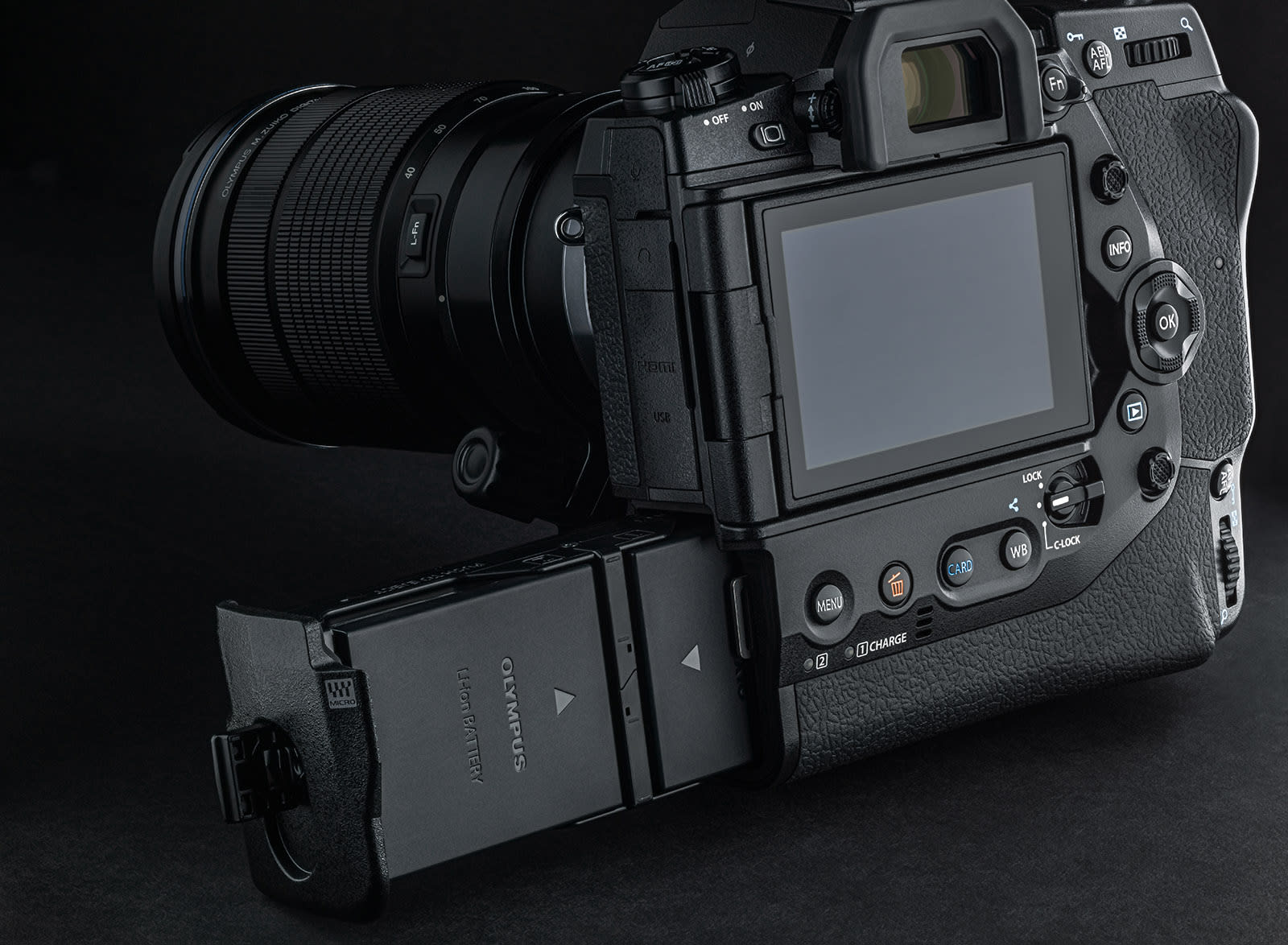 As with the O-MD E-M1 Mark II, the new model has 121 cross autofocus points, though Olympus has added group and custom targets for more shooting versatility. Speeds -- along with the 20.4-megapixel processor and dual TruePic VII processors -- are the same as before. The M1X can shoot up to cinema 4K (4,096 x 2,160) at 30 fps (1080p at 120 fps), but Olympus has brought in a log shooting mode (OM-Log400) for improved dynamic range.

There's no doubt that the OM-D EM-1 Mark III was well ahead of its time when it first arrived. The latest model has some nice upgrades, particularly the new image stabilizer, but it's largely leaning on the same tech as its predecessor, which came out in 2016. It's now competing in a tougher space that includes Panasonic's Micro Four Thirds rival GH5 and, particularly, Fujifilm's new X-T3, which can also handle C4K video, but do so at 60 fps and with a larger sensor.

However, if you're a Micro Four Thirds shooter that wants blazing speeds and a truly professional body, the OM-D EM-1X is one of the few cameras that measures up. It's still faster than just about any model, period, and can now handle even the ugliest shooting conditions. It'll start shipping in late February 2019 at a price of $3,000 for the body only.