Keytars, almost by definition, are charmingly goofy. How could they not be? They're wearable pianos that lend themselves well to pageantry. Racks of meticulously prepped synths come with a sort of gravitas that doesn't exist when keys are slung across a musician's body, making the person as much a part of a show as the music. It's all just a little more fun.

With the help of its new, $500 Sonogenic SHS-500 keytar, Yamaha is trying spread that fun around. For better or worse, the company is pitching it as a musical instrument for people who want to sound like serious musicians without actually having to practice for a few years first.

To be clear, the Sonogenic will do in a pinch for gigs or more-serious work: It's lightweight and comfortable to wear, and its 37 keys felt easy enough to work with. There's no shortage of controls here either. Its neck is laden with familiar controls for pitch bending and octave shifting, and a trio of dials and sliders to the right of the keyboard itself offer quick access to crucial effects.

You'll also find 30 piano and synth voices (plus a couple drum-kit options) to muck around with, and beyond that, the Sonogenic is meant to work just fine as a MIDI audio controller once it's hooked up to your DAW of choice. All told, it's a decently flexible little synth, even if it lacks the sort of flexibility and panache that other options might offer. 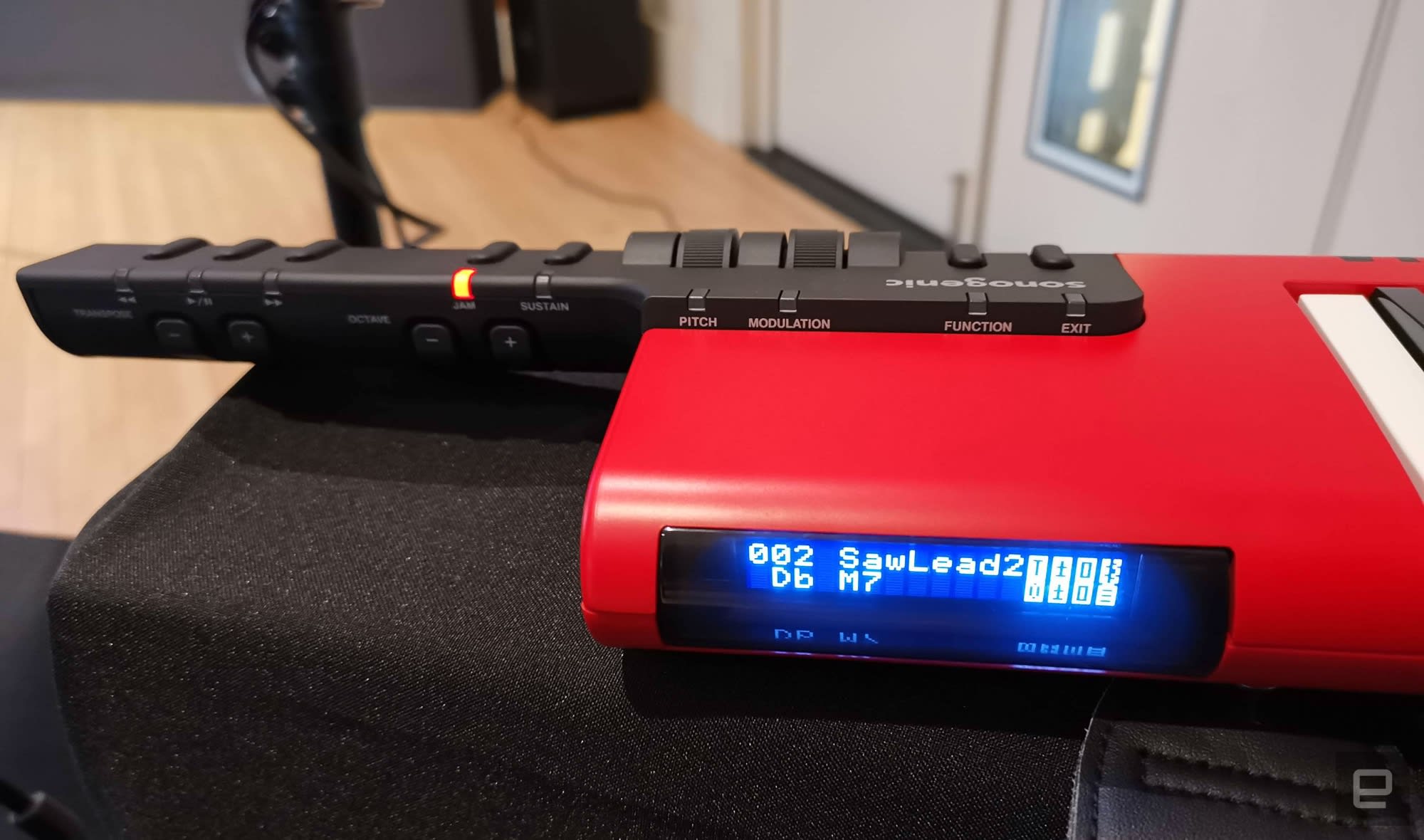 Of course, if you're the kind of player who gets a little tetchy about flexibility, this thing isn't really meant for you. Yamaha is pushing the Sonogenic as a party trick of sorts for teenagers and millennials to turn to when they want to just start playing.

All the heavy lifting is handled by Yamaha's clever companion app, which taps into your phone or tablet's existing music library and tries to scan your chosen tracks to generate the right chord progressions. Curiously, all of this happens on the fly: There's no Yamaha database to pull these chord progressions from once the app identifies the song, so it's possible (if unlikely) that the app doesn't get things exactly right. In any case, once the app figures out what you're trying to play, it sends that series of chords to the Sonogenic via Bluetooth and offers cues on the connected screen when it's time to jam.

Now, I'm not much of a musician, and I said as much to the Yamaha rep who gave me a Sonogenic to go hands-on with. My sense of rhythm, in particular, is garbage. Could this Jam mode help me feel like a professional musician? Well, yes and no.

Once your chosen song (in my case, Toto's "Africa") starts to play, there's essentially no way to screw up. While in Jam mode, the Sonogenic stops acting like a standard chromatic keyboard all together -- all you really need to do is mash on those keys in time with the rest of the song. It doesn't matter where on the keyboard you decide to noodle; as long as you're doing something, the Sonogenic makes sure it sounds like you know what you're doing. My "Africa" cover was, let's say, a little more avant-garde than I wanted, but at the end of it all, I still felt a mild twinge of success. I did it! I played an overrated '80s standard on a keytar! Even the cold I was battling at the time couldn't dampen that momentary buzz.

Would I have felt more accomplished had the Sonogenic and its app actually helped me learn to play the song normally? Absolutely. As it stands, the experience of "playing" a Sonogenic in Jam mode felt an awful lot like musical mimicry: It's neat for a bit, but I could see the kind of fun this keytar offers ringing hollow and unsatisfying after awhile. Somewhere in my parent's house, there's a VHS of me playing with a hideous toy guitar, gyrating on my chubby toddler legs, enthralled by the music I thought I was making. At the end of my time with the Sonogenic, I was left knowing that, musically, I hadn't progressed very far from that moment.

I am, however, overthinking all of this. I mean, just look at this promo video Yamaha made for the Sonogenic. The keytar might work fine as a more traditional synth, but it's also pretty clear that I am absolutely not the kind of unselfconscious young person Yamaha is targeting with the Sonogenic. You might not be either. There are good times to be had bouncing around with this keytar strapped to you, just as long as you abandon your hang-ups and embrace the pantomime.