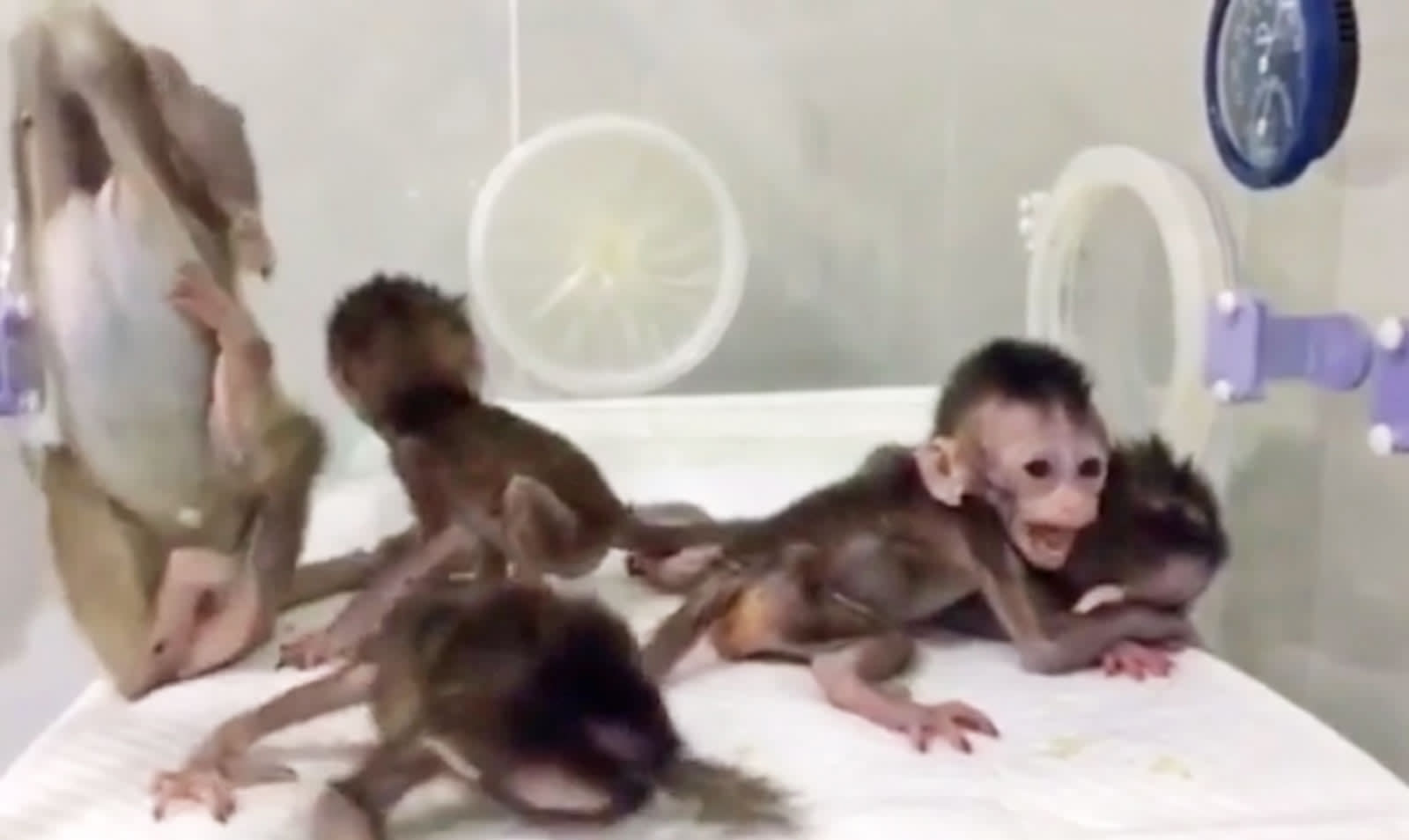 Scientists in China announced this week that they've successfully made five clones of a gene-edited monkey to aid in researching a number of conditions relating to circadian rhythms. The idea is that having a group of five genetically identical monkeys will help remove variables in research, but the whole experiment raises some rather murky ethical issues as well.

Researchers at the Institute of Neuroscience (ION) of Chinese Academy of Sciences (CAS) in Shanghai intially gene-edited a group of monkeys to make it more prone to disorders that stem from circadian rhythms. Because of this gene editing, the monkeys "exhibited a wide-range of circadian disorder phenotypes, including reduced sleep time, elevated night-time locomotive activities, dampened circadian cycling of blood hormones, increased anxiety and depression, as well as schizophrenia-like behaviors." The researchers then used fibroblasts (connective tissue cells) from one monkey in that groupto produce the five clones using the same technique that successfully produced the first primate clones in early 2018.

The teams behind the research appear to be forthcoming about what they hope to learn. In one paper, the researchers state that the reason they developed monkeys prone to these disorders is to learn more about how they can be treated in humans. "BMAL1 knockout monkeys are potentially useful for studying physiological consequences of circadian disturbance, and for developing therapies for circadian and psychiatric disorders," the paper's abstract says. Meanwhile, the cloning project "paves the way for developing macaque monkey disease models with uniform genetic background."

That said, some have raised ethical concerns -- both with the idea of gene-editing monkeys to make them more disposed to these serious disorders as well as with cloning an animal like that for research purposes. "If I were on an ethics review committee, I would be very hesitant to approve [this research] because of the incredible amount of harm to the animals," bioethicist Carolyn Neuhaus from The Hastings Center told Gizmodo.

China's Xinhua news agency (via Reuters) claims that the research was "in line with international ethical standards for animal research," but the ethical discussion around the experiment otherwise doesn't appear to be publicly available right now. Regardless, it seems reasonable for some to be questioning the value of this research compared to the apparent suffering of the subjects.

In this article: Circadian, clones, cloning, CRISPR, ethics, medicine, tomorrow
All products recommended by Engadget are selected by our editorial team, independent of our parent company. Some of our stories include affiliate links. If you buy something through one of these links, we may earn an affiliate commission.