Its new Glow lamp might lead to more restful slumber.

Casper is perhaps most well known as the company that popularized the direct-to-consumer mattress-in-a-box movement. Now, however, Casper is ready to move beyond mattresses with its latest innovation: the Casper Glow. Though it might look like a normal lamp, it's actually a smart light designed to dim and brighten in concert with your circadian rhythms, in the hopes of giving you a better night's rest.

The Glow is in the shape of a 5-inch tall, 3-inch wide rounded cylinder. It's portable, so it can be carried around with you. Or it can be set in a charging base, ideally on your bedside table. Encased in the lamp is a 2,700k high-efficiency LED that emits a "warm" hue, which Casper says is much gentler on your eyes than the blue light that typically comes from most reading lamps or your smartphone.

As mentioned, the Glow is designed to gradually dim at bedtime to help you drift off to sleep. By default, it does this over the span of 45 minutes, but you can customize it with a companion app. If you buy more than one Glow, you can sync them using said app so that they turn on and dim at the same time. Similarly, you can schedule a wakeup time so that the Glow will slowly brighten to ease you into the morning. This typically takes around 30 minutes, but you can adjust that via settings as well. The Glow also has an ambient light sensor, which helps it emit the right light for the environment.

The Glow turns on and off in a rather unique way; by flipping it over. You flip it over to turn it on, and then flip it over again to turn it off (There are charging pins on either end, so there's no wrong side up). There's a button on each side that share the same function; pressing it will pause the aforementioned dimming, and pressing it again will resume it. You can also twist the Glow to adjust its brightness. To turn the Glow off entirely, you can press and hold the button for around six seconds.

One of the reasons the Glow is portable is so you can also use it as a lantern of sorts. Say it's the middle of the night, and you want to use the bathroom. Instead of stumbling around in the dark, you can lift the Glow, give it a wiggle, and a soft light will come on. You can then bring the Glow around with you to illuminate and guide you through the dark hallway. 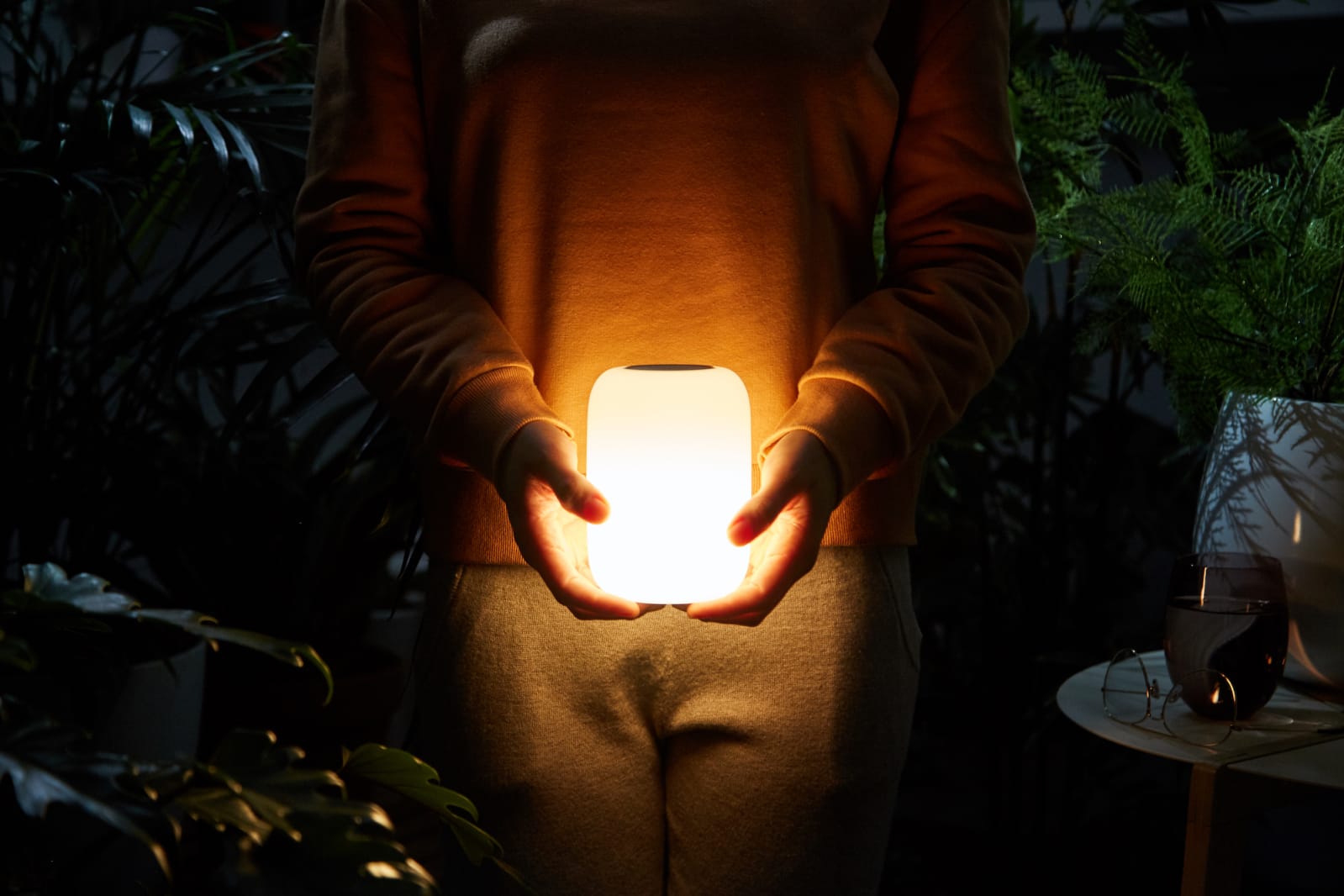 According to Casper, Glow's battery life varies depending on usage and brightness settings. Out of the charging base, the light can last several days worth of dimming and waking. If it's just continuously on when the Glow is paused, then the battery will last up to seven hours.

The Glow is certainly not the only light alarm on the market. Philips makes several different versions, and there are models from the likes of Mosche, Lumie and iHome as well. Additionally, while the other lamps have clocks, the Glow doesn't. Still, the Glow's flip-to-switch gesture is kind of cool, and the portable guide light feature is unique. The grouping together of multiple Glows is quite useful as well.

If that sounds like something up your alley, a single Glow will cost $89, while a two-pack is set to sell for $169.

All products recommended by Engadget are selected by our editorial team, independent of our parent company. Some of our stories include affiliate links. If you buy something through one of these links, we may earn an affiliate commission. All prices are correct at the time of publishing.
View All Comments
Casper has a smart sleep lamp to go with your mail-order mattress