With the upcoming release of Nike's $350 Adapt BB, self-lacing shoes are set to become more commonplace, and Puma isn't about to let its rival take all the credit. After all, the German company showed off its own self-lacing sneaker, the Autodisc, back in 2015 -- around the same time as Nike's iconic (and ultra rare) Mag before it evolved into the HyperAdapt. The only problem was the Autodisc just wasn't practical enough to enter retail -- it was too expensive, too heavy and could have been more comfortable. But that's about to change with Puma's latest creation, the Fi (pronounced as "F-I" aka "Fit Intelligence").

Puma spent the last three years working on this new self-lacing shoe. That's much longer than the ten-month development cycle for the Autodisc, mainly because for the Fi, Puma needed to find the sweet spot between intuitiveness, practicality and affordability. In the end, the Fi became a shoe made for training and everyday use, and a pair will cost $330 when it launches in Spring 2020. The all-black Fi looks stealthier than the bright yellow Autodisc, with the intent of getting people to focus on the motor feature and the overall experience. That said, the Fi does have blue LED lights that light up when the motor is operating or when the it's charging -- the lights indicate the battery level as well. Oh, and the motor is noisy, but in a cool way.

Unlike Nike's offerings so far, Puma's latest self-lacing sneaker still relies on a top-side custom cordless motor. The company's Global Director of Innovation, Charles Johnson, considers this to be a design advantage since there's less under foot, which he believes leads to better comfort and performance. He added that this also follows the legacy of Puma's disc lacing technology, which since 1991 has always been placed at the top of shoes. 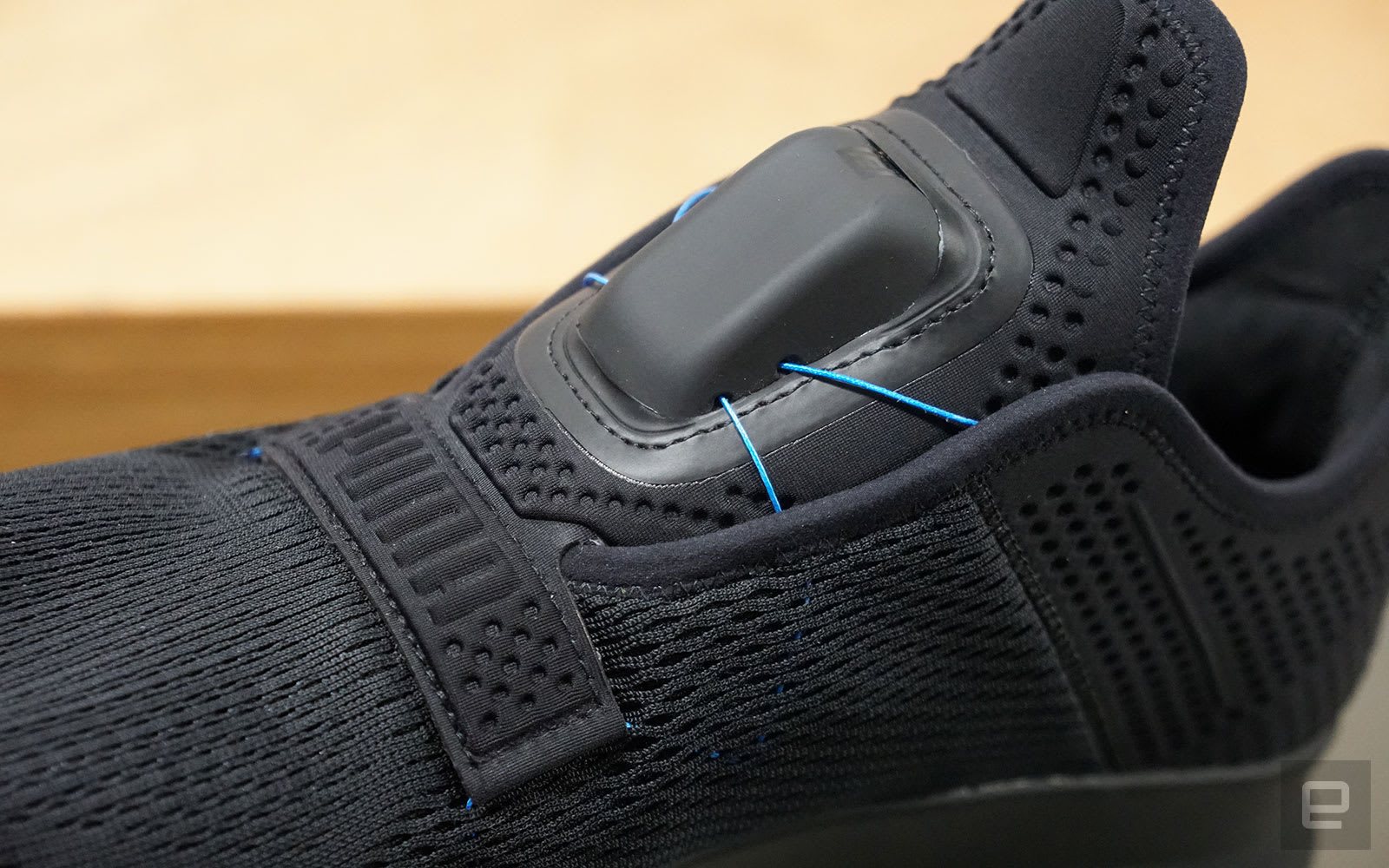 The motor is hooked up to a simple network of blue Dyneema strings -- the same tough material used in defense and commercial fishing industries -- shrouded around the middle of the shoe. There's a removable battery tucked inside a water-resistant (but not waterproof!) compartment in the midsole, and you can juice it up by placing the shoes' heels on the small Qi wireless, or take it out and put it in the dual battery charging case -- a thoughtful alternative to suit travel needs.

The Fi's motor is much smaller than the Autodisc's, but it's based on the same mechanical principles. Thanks to the addition of a tongue, the Fi looks and feels a lot more like an ordinary sneaker than its slip-on predecessor. I even let a few of my colleagues with similar shoe sizes as me try my pair on, and they all agreed that they're comfortable. It's also much easier to operate the Fi's motor now that Puma has implemented swipe input on the module, as opposed to using soft buttons which didn't feel great. 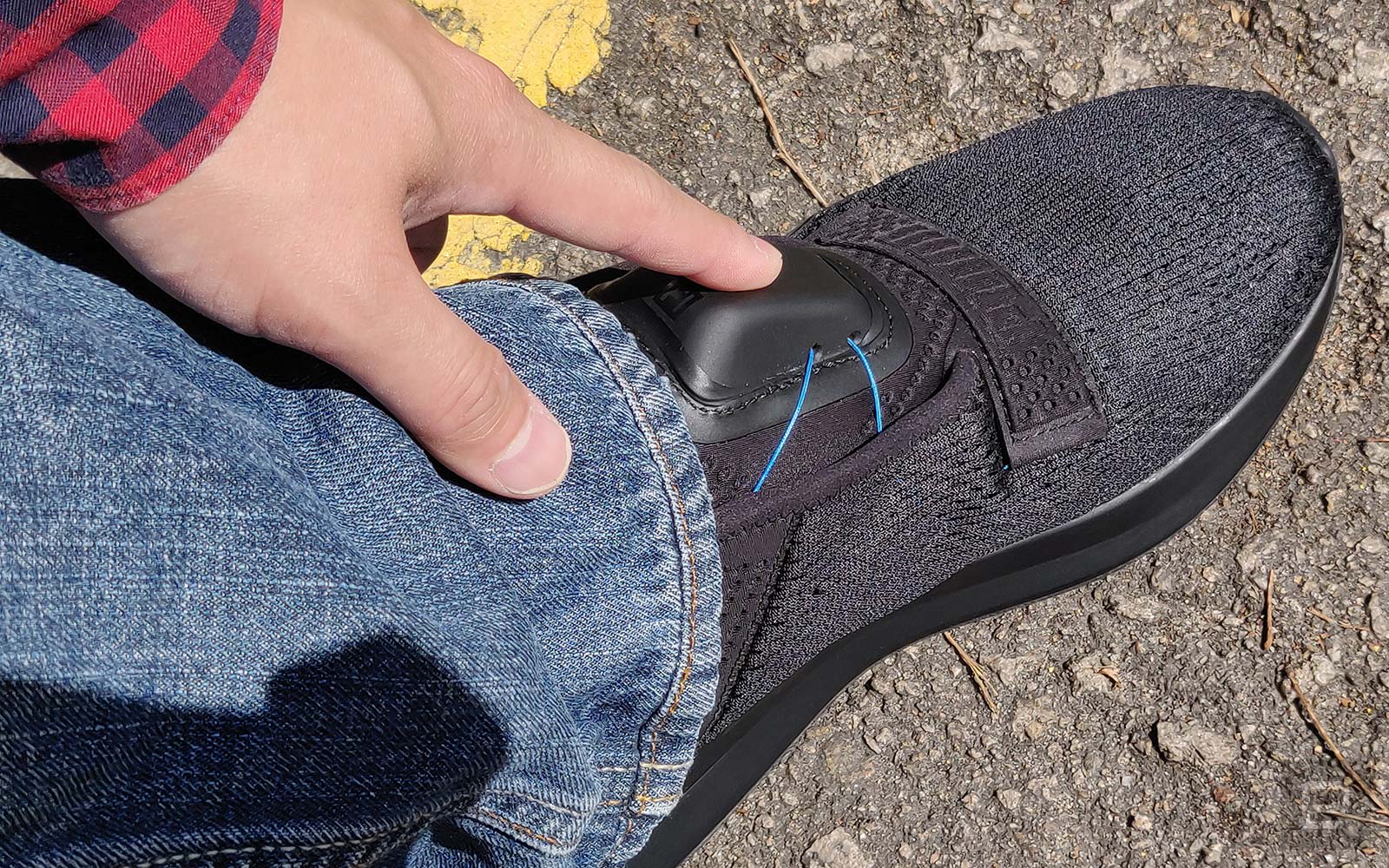 The controls are simple: To tighten, simply swipe from toe side to ankle side on the module's strip, and the motor will do its work until it feels the right amount of tension on the strings. Like before, there are three levels of tightness, and if needed, you can tighten further by pressing down on the top end of the strip, and vice versa on the bottom end; the motor will save your preferences and adjust the lower two settings accordingly. To release the shoe, just swipe from ankle side to toe side.

While I haven't tried Nike's new shoes myself, it seems that the Fi's touch input is more intuitive and easier to access than the physical buttons on the outer side of the Adapt BB's sole. That said, I do admire the fact that Nike's shoes automatically tighten as soon as you put your feet in, whereas the Fi requires at least one swipe.

Much like the Autodisc, the Fi can be operated via a smartphone -- just iPhone for now. While the Adapt BB already supports Android, the Fi makes up with Apple Watch support, which can be handy if you want to leave your iPhone at home or in the locker while working out. 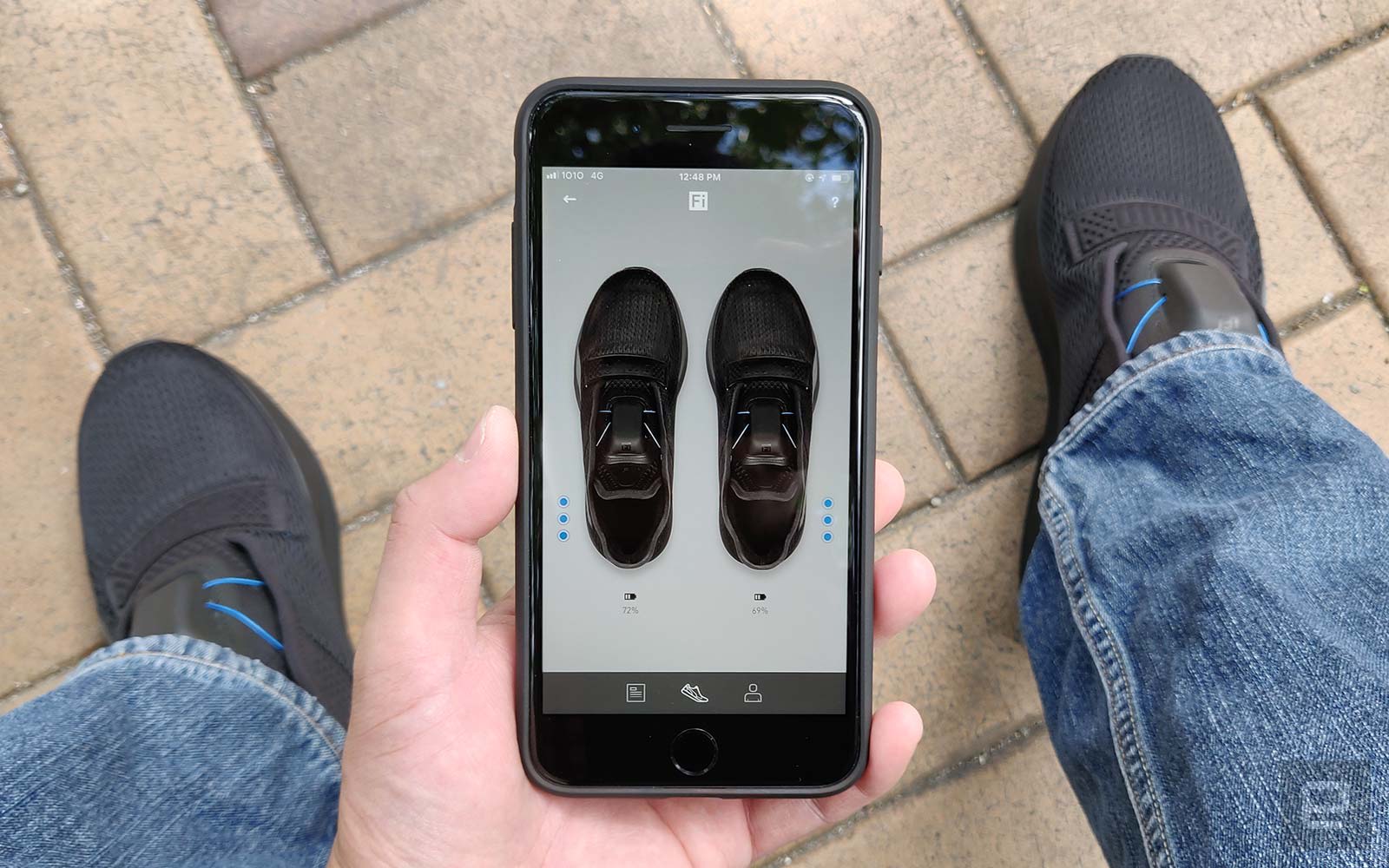 The same gesture controls are found in both the iPhone and Apple Watch apps: you tap on (or swipe to) your desired shoe and swipe away. The iPhone app also shows each shoe's battery level, and it lets you make micro adjustments: Just choose one of the shoes, then press and hold on either the top or bottom side until your fit is right. The shoes respond to your remote commands even when you're in motion, but you may want to keep your feet still if you want a perfect fit.

According to Puma, each Fi weighs 428 grams -- 45 of which come from the electronic and mechanical parts. That seemed a lot more on paper than, say, my 310 gram Adidas UltraBoost Parley, but the weight increase wasn't that noticeable once I put the shoes on, and they're lighter than some basketball shoes. I've been wearing a pair of Fi for almost two days, and despite the additional solid components, they don't feel much different than other ordinary sneakers. Bay McLaughlin, the COO of Hong Kong-based IoT accelerator Brinc, is the only other person who got to exclusively try the Fi, and his pair performed just as well even when he was dropping weights at the gym or walking up steep roads on Hong Kong Island. 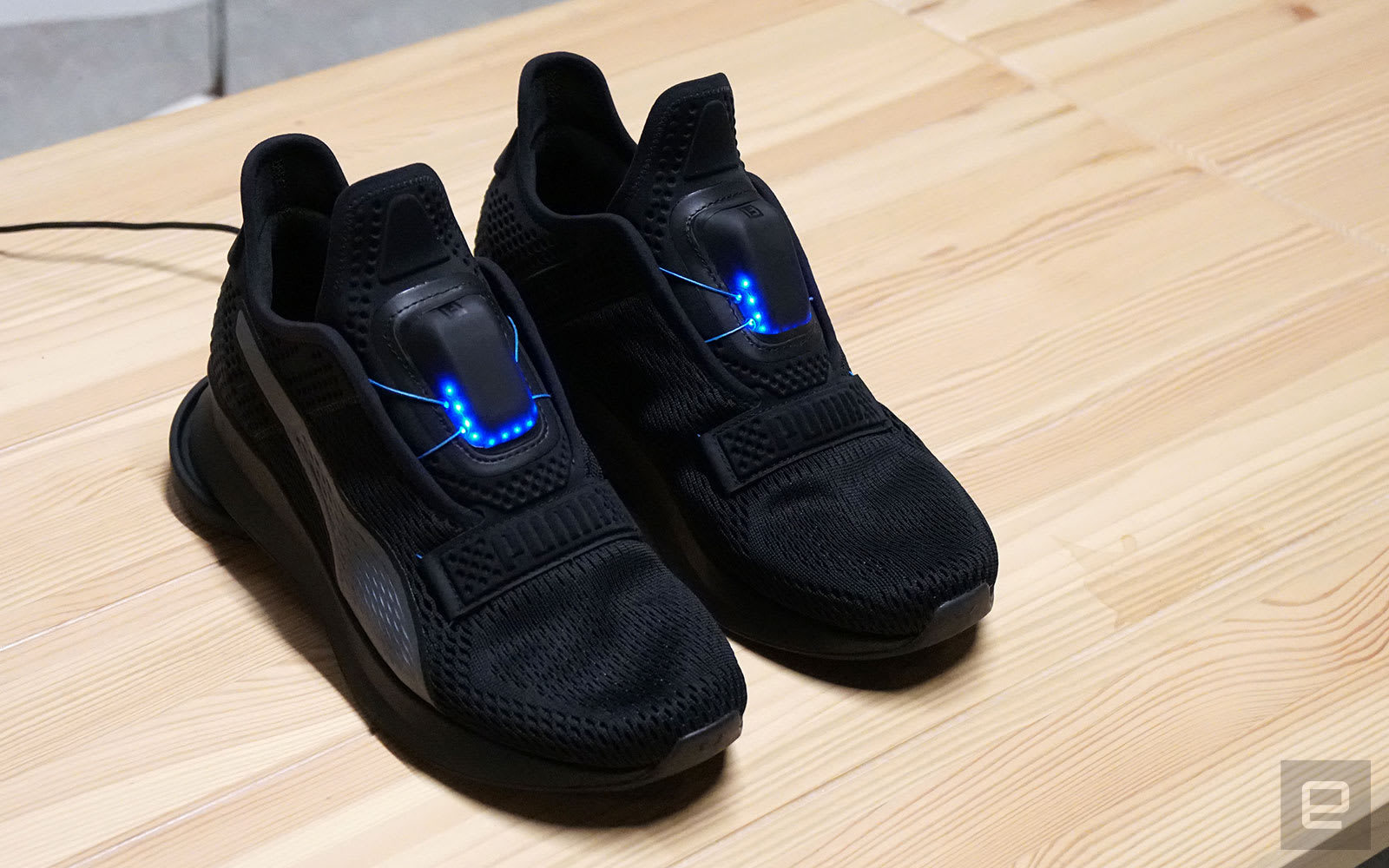 In terms of battery life, I've been told to expect around five to seven days, which seems reasonable and almost matches my experience so far -- or it would if I cut down on showing off. While that's nowhere near the Adapt BB's two-week rating, no one has verified Nike's battery life claim. When the Fi's batteries are all used up, it'll take somewhere between 90 to 120 minutes to charge them up again, but that shouldn't be an issue if you develop a habit of putting the shoes on the charging mat every time you get home.

The most interesting thing about my experience with the Fi over the last two days is that I ended up appreciating the self-loosening aspect more than self-tightening. As I didn't need to bend down to untie laces, I started to enjoy stealthily loosening my shoes whenever I sat down at my office desk or at a restaurant. Think of it as switching from sneakers to loafers with a simple swipe. And I wasn't alone: McLaughlin told me that he also developed this habit with his Fi. Having said that, this is only "stealthy" when I'm in a noisy environment; my colleagues around me are no longer amused by the motor's mechanical noise. Don't get me wrong, I do think it sounds cool, but perhaps only when served in small doses.

It would have been nice if the Fi also came with other smart features, especially activity and GPS tracking. On that, Johnson said that, while his team had come across such feature requests and pitches every now and then, the number of people who actually want those smart features are often the minority. Most people prefer using more mature solutions on their smartphones or smartwatches. 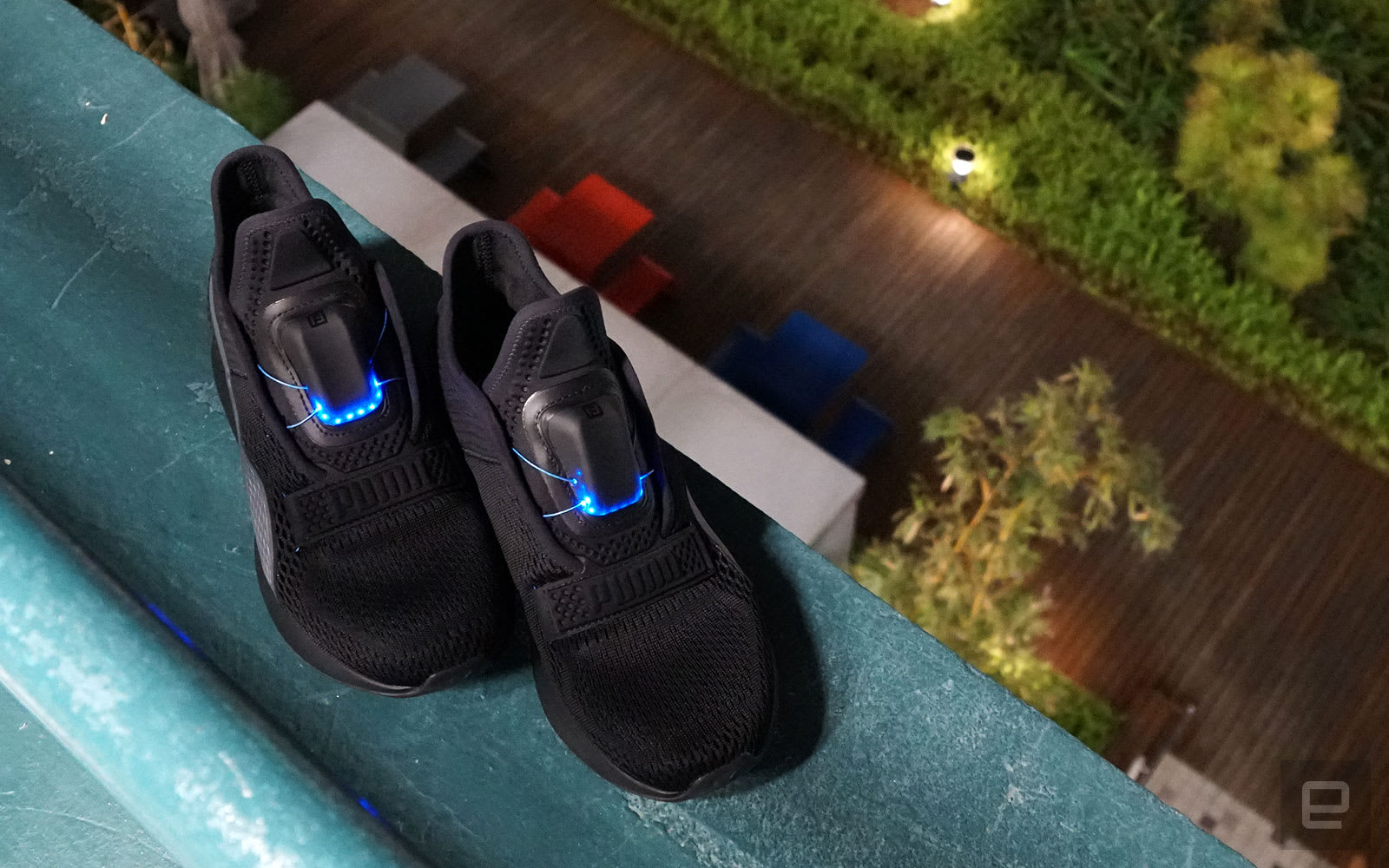 Obviously, this also has to do with cost and technical feasibility, but having just re-released the activity-tracking RS-Computer shoes (albeit in very limited quantity), I'd be surprised if Puma doesn't plan on merging activity tracking into a future version of Fi. In fact, Johnson did imply that we should expect an AI-enhanced Fi in the near future, which can adjust fit on the fly depending on the user's activity. What's more interesting is that Puma has also begun development of Fi apparel, but we'll have to wait and see what becomes of that.

Going back to shoes, while the Fi won't be available until Spring 2020, Puma is, for the very first time, launching an open beta program to let consumers try these upcoming sneakers in exchange for useful feedback and ideas. That's a surprising move for such a futuristic product, but then again, this may provide ample ammunition for Puma ahead of the next wave of sneaker war. For those who are interested in trying a pair of Fi well ahead of launch, stay tuned to Puma's PUMATRAC training app for further announcement on when and how to sign up. We'll obviously be keeping a close eye on the Fi's development as well.