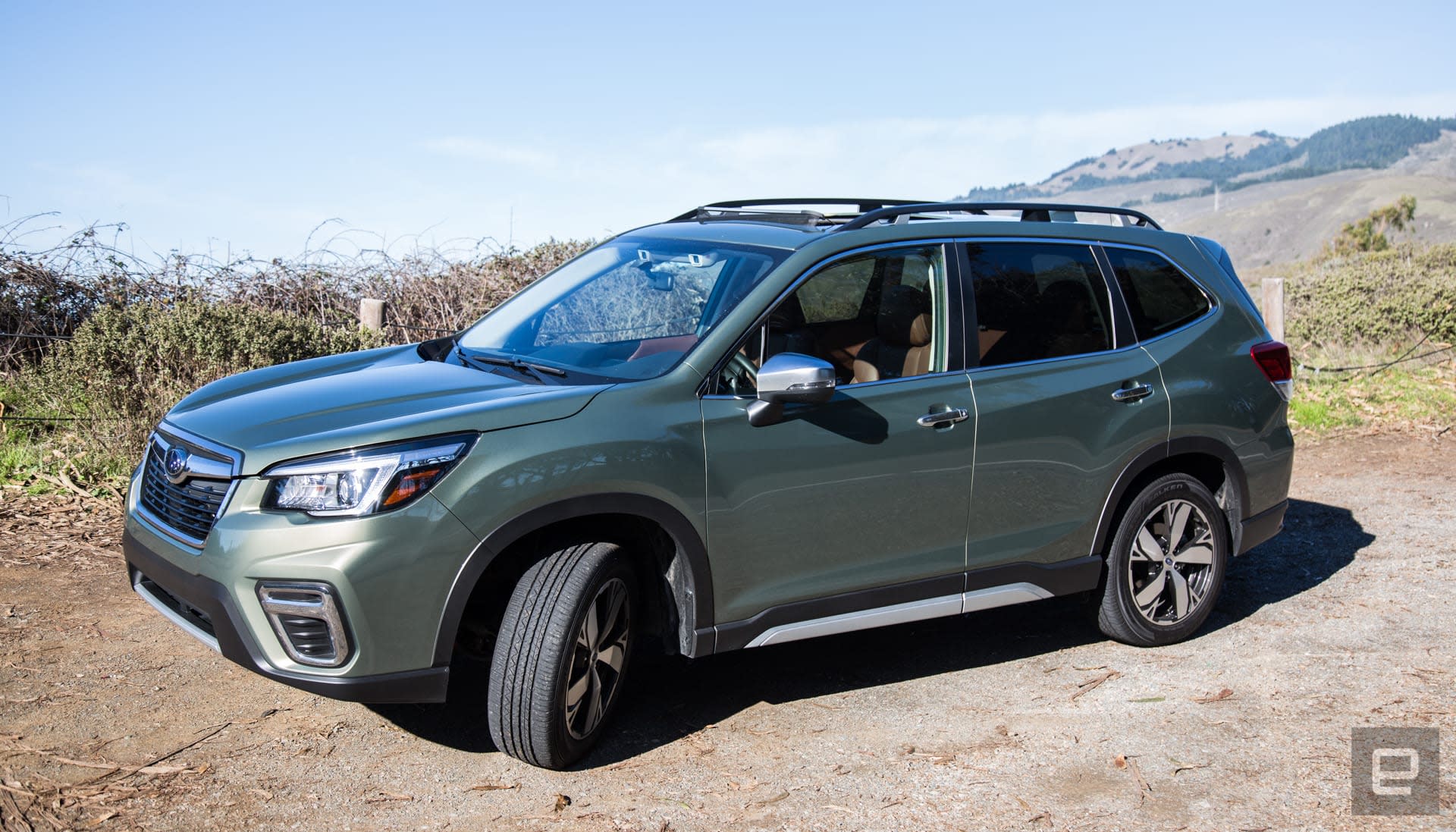 I really need a dog to drive this car

The boxy Subaru Forester (starting at $24,295) has grown over the years. From a station wagon beset with right angles to an SUV with a tall interior that's got enough room for even the largest Golden Retriever or Labrador. Reviewing this car without a friendly pooch seems very un-Subaru but I'll make do since I don't need a canine and the car keeping an eye on me while I drive.

While the Forester has grown in size, its appeal and utility have stayed the same. An all-wheel-drive vehicle that appeals to the people that enjoy the outdoors, have dogs (see above) and really don't see the need for a lot of frills. The Forester delivers on all that, but now it's a bit of a babysitter that'll yell at you when you're not paying attention to the road and considering how alluring our smartphones have become, that's probably a good thing.

Tech wise, the Forester is home to Subaru's new DriverFocus distraction mitigation system. Using in-car sensors, the vehicle watches you to make sure you're facing the road. The cameras are stationed on the dash and "look" at you while the car is in motion and alert you to pay attention. If you, for example, look down at your phone for too long, an alert sounds and the dash displays a warning to pay attention. Stare out the window instead of at the road, and it sounds an alert. Look at your passenger to chat and, well, you get the picture. 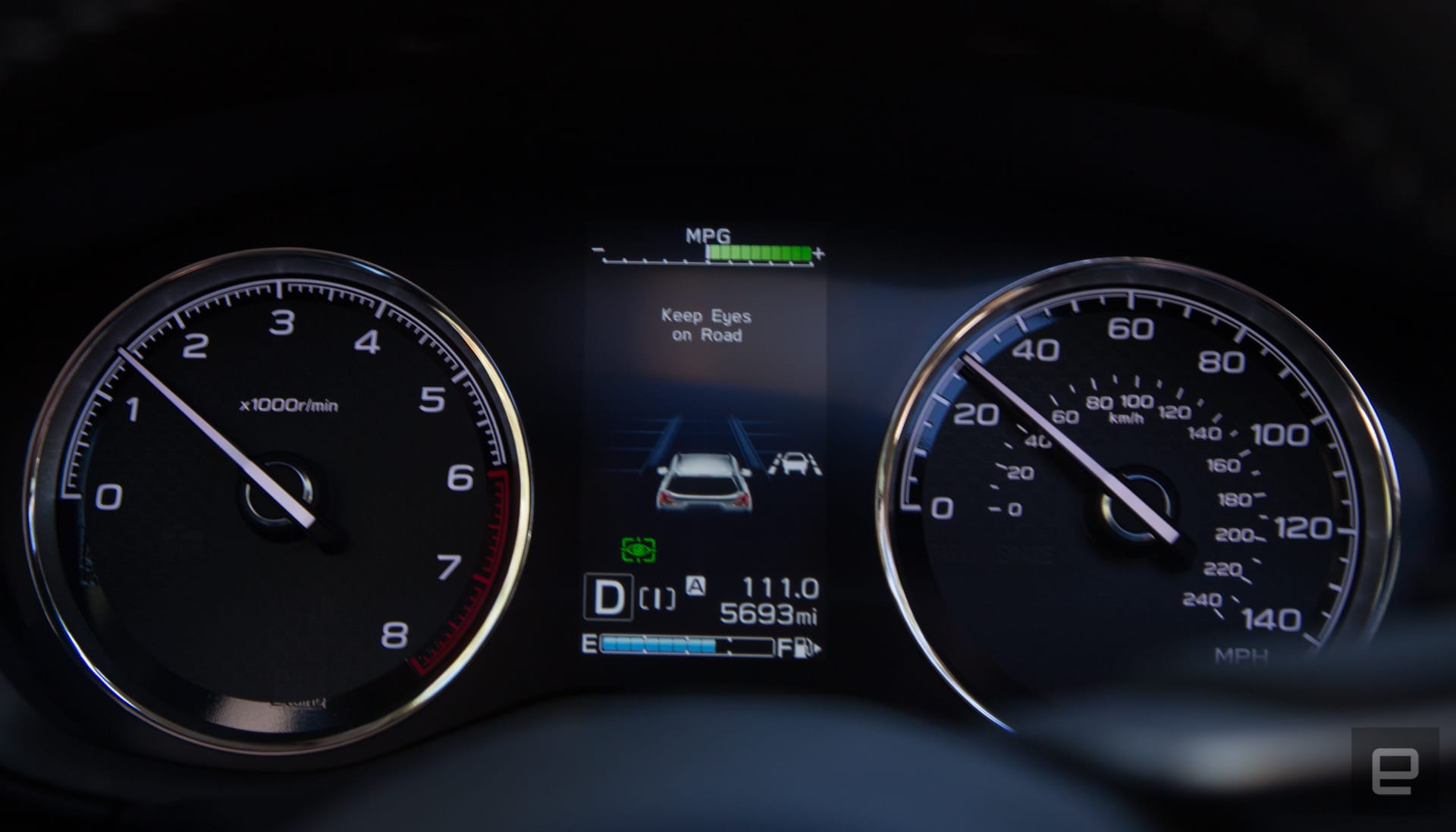 In a perfect world, this would seem a bit like overkill. A car yelling at you to do the one thing you're supposed to do while behind the wheel seems ludicrous. But we all fall prey to the lure of our smartphones eventually and those moments, while brief, are incredibly dangerous.

I like to think I'm an attentive driver. While testing the system, I'd turn my head but keep my eyes on the road. It's awkward, but it tricks the system into believing I'm looking elsewhere. I did the same thing with Cadillac's Super Cruise. But in the real world, the car yelled at me when I spent too much time looking at my wife while talking to her and sadly, while looking down to see what sort of Slack notification my boss had sent me. It's a great feature even if it can be annoying.

The in-car face-tracking system is also used to recognize different drivers and automatically adjust the vehicle to their predetermined specifications. It'll adjust the seat, the mirrors, etc. It did take a bit to get the system to recognize my face. I'm not sure if it had to do with the dark parking garage I was in or my face itself. It had less trouble in daylight, but it still took a few times to "see" who I was during set up.

The face-sensors aren't the only cameras in the car. Subaru's safety and driver's assistant features use the automaker's EyeSight cameras situated behind the windshield. I found the adaptive cruise control to be up to par with offerings from luxury brands -- but it's a bit more cautious than most anything else on the road. For example, the gap between the Forester and other vehicles was larger when in the closest following setting than most vehicles have in the second closest following setting. It takes a bit getting used to if you've used other vehicles. 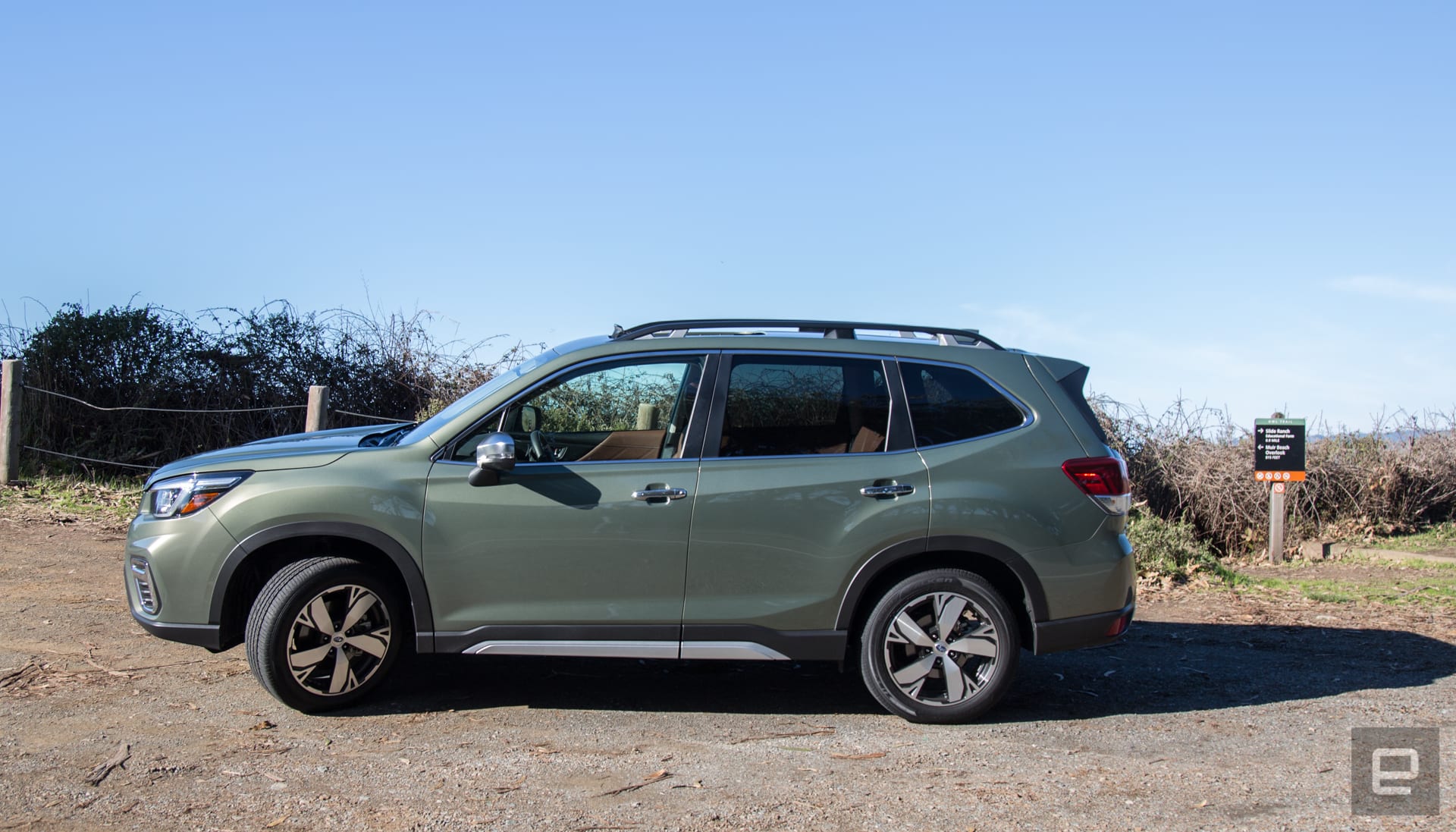 While the adaptive cruise control was good but very cautious, lane-keep assist still has a way to go to keep up with others in the industry. The car is tracking the lanes, but the system is really only good at staying in a lane while going straight or tackling only the widest of turns. Like distraction tracking, it will yell at you when you leave your lane. It just doesn't do much to help you stay in it.

Inside the car, Subaru opted for two screens in the dash. The main touchscreen houses the automaker's Starlink infotainment system and resembles a tablet shoved into a dashboard. It works well, but it's not breaking any new ground. The car supports CarPlay and Android Auto, so overall you won't be disappointed, but you won't be wowed either. Which frankly, when it comes to infotainment systems, is good news.

A second screen resides further up on the dash and it shares information about the Eyesight system, how power is distributed, the angle of the vehicle and other tidbits of information that is helpful at a glance and doesn't get in the way of the main Starlink display. It's a nice addition to the interior that's comforting and familiar. Mostly because the button and knob layout in Subaru vehicles hasn't changed all that much in years.

The interior of a Subaru is like a warm flannel jacket you've had forever. It's comfortable and you know what's in all the pockets. Are there other, possibly better jackets out there? Sure there are, but you like this one. In the Forester, all the knobs and buttons are exactly where you would expect them to be -- and the climate controls are still physical dials. Helpful if you live somewhere cold and get in the car with gloves and just want the heat on ASAP without fiddling with a touchscreen. The volume control is also still a real knob.

It's not fancy, but I'm a fan of the rather drab but useful layout.

The rest of the inside of the Forester is as welcoming and comfortable. It's also spacious, with a whopping 76.1 cubic feet of cargo space. That's more than a Ford Escape and Honda CRV. I did go to Costco in the car and bought far too many items (I'm set for toilet paper for at least three months) and the vehicle had plenty of room to spare.

On the road, I found the Forester to be more spirited off the line than the Impreza or Crosstrek. It's not going to do any record quarter-mile runs, but its 2.5 liter 4-cylinder Boxer engine can hold its own at the stop light and has no trouble on on-ramps. It has 182 horsepower and 176 foot-pounds of torque. Sadly there are no options for a turbo or manual transmission. Subaru speed enthusiasts will need to head over to the WRX for those niceties. 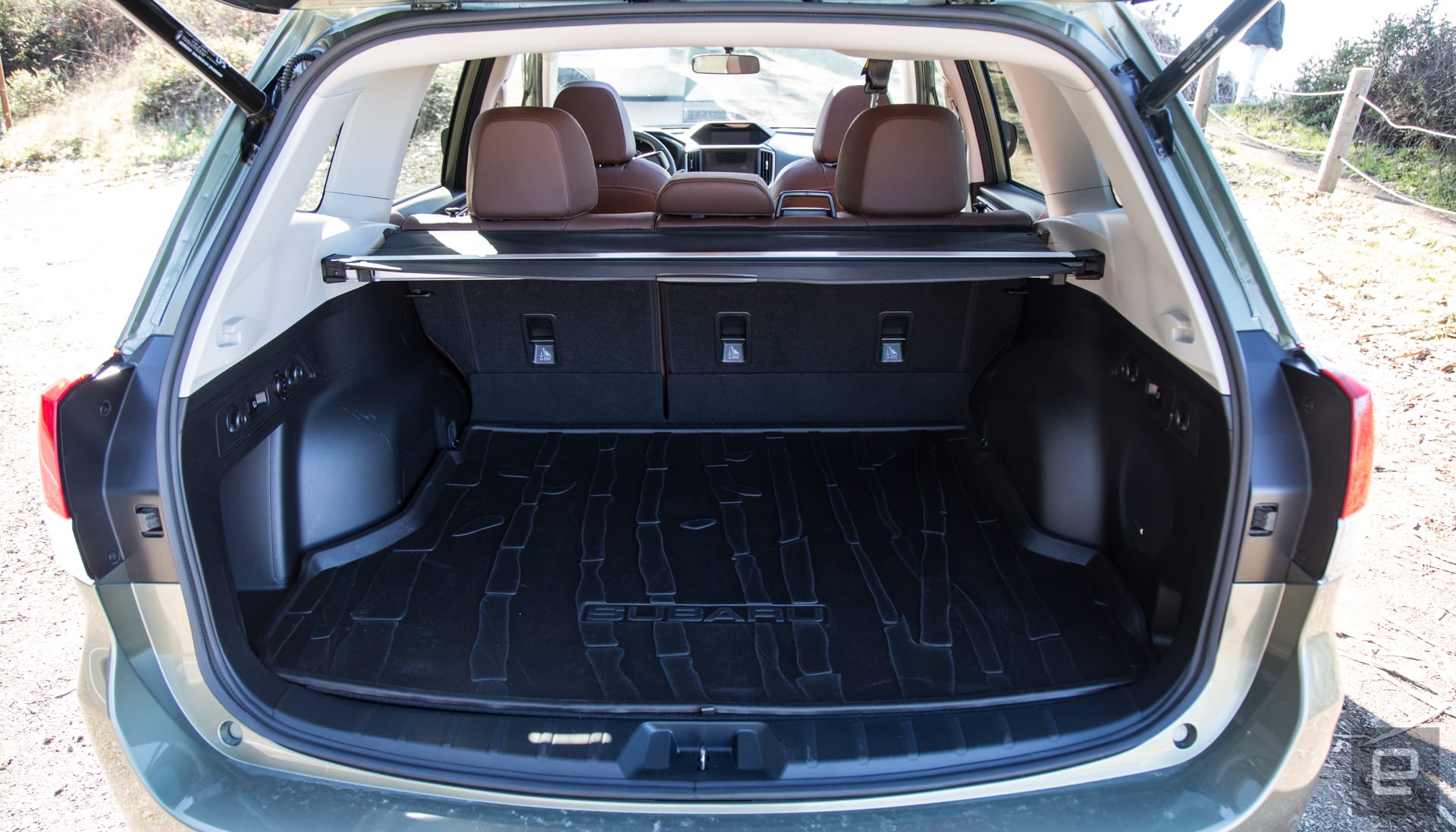 The Forester has outgrown the enthusiast market. It's a comforting ride that feels solid in all weather conditions thanks to the automaker's long lauded symmetrical all-wheel drive system. The Forester devoured rain-slick roads without any fuss. I do wish I had taken it to the snow for a proper test drive on the white stuff. If I had, I'm sure like a family dog or warm flannel it would have been a comfortable affair.

All products recommended by Engadget are selected by our editorial team, independent of our parent company. Some of our stories include affiliate links. If you buy something through one of these links, we may earn an affiliate commission. All prices are correct at the time of publishing.
View All Comments
Subaru’s Forester combines driver monitoring tech with outdoor style
2019forester
business
design
DriverFocus
eyesight
forester
gear
review
starlink
subaru
transportation