Pound those pigs into pudding on the Oculus Rift and Vive.

In the ten years since the game's original release in 2009, Angry Birds has become both a pop icon and marketing juggernaut, spawning countless sequels, spinoffs, merchandising tie-ins and even feature-length movies. Now, the feathered flock of pig-popping fliers is coming to the Vive and Oculus Rift in Angry Birds VR: Isle of Pigs.

Rovio, the company behind the Angry Birds IP, teamed with Resolution Games around May of last year to develop the VR title, which will be available starting today. "We felt that the IP itself lended extremely well to using your hands," Tommy Palm, CEO of Resolution Games, told Engadget during a recent press demo, "being able to intuitively know what to do and have this 3D version of an old classic." 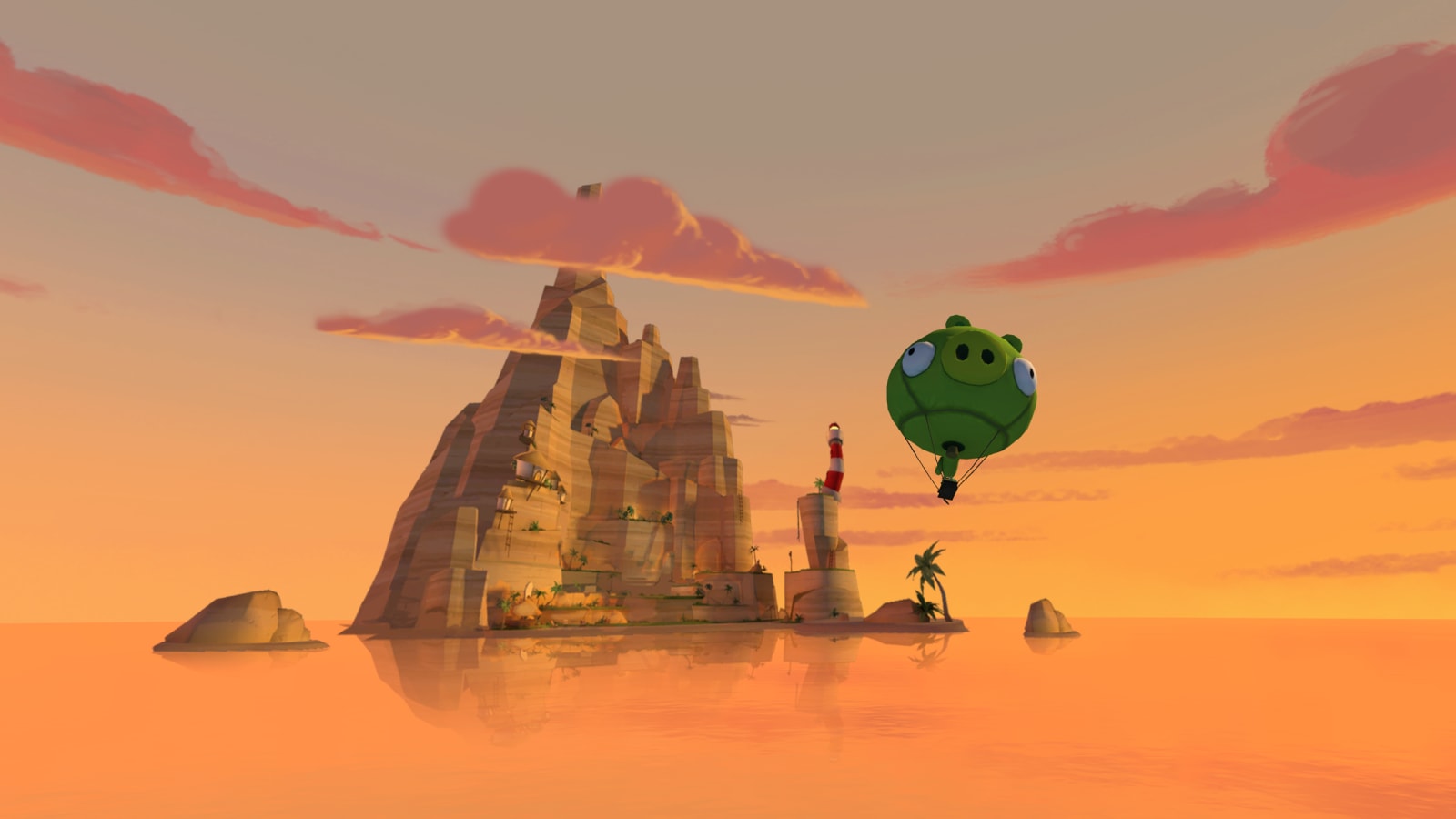 After donning a VR headset and controllers, players are greeted by the familiar Angry Birds homescreen where they can choose from more than 50 levels spread among four large worlds.

The original flock -- Red, Chuck, Bomb, and Blue -- are at your disposal as are their unique demolition skills. The rules of the game are the same as when you played it on your mobile device: launch a set of birds at a series of shoddily constructed towers protecting those porcene villains to bring the entire structure tumbling down like the Walls of Jericho.

But in VR, you're doing much more than swiping across a phone screen. Players "hold" the slingshot in their left hand, enabling them to roughly aim at their intended target. The player's right hand loads birds into the launcher and draws the rubber band taught. The amount of draw determines the arc of the shot and can easily be judged thanks to the trajectory dots that appear when you do. 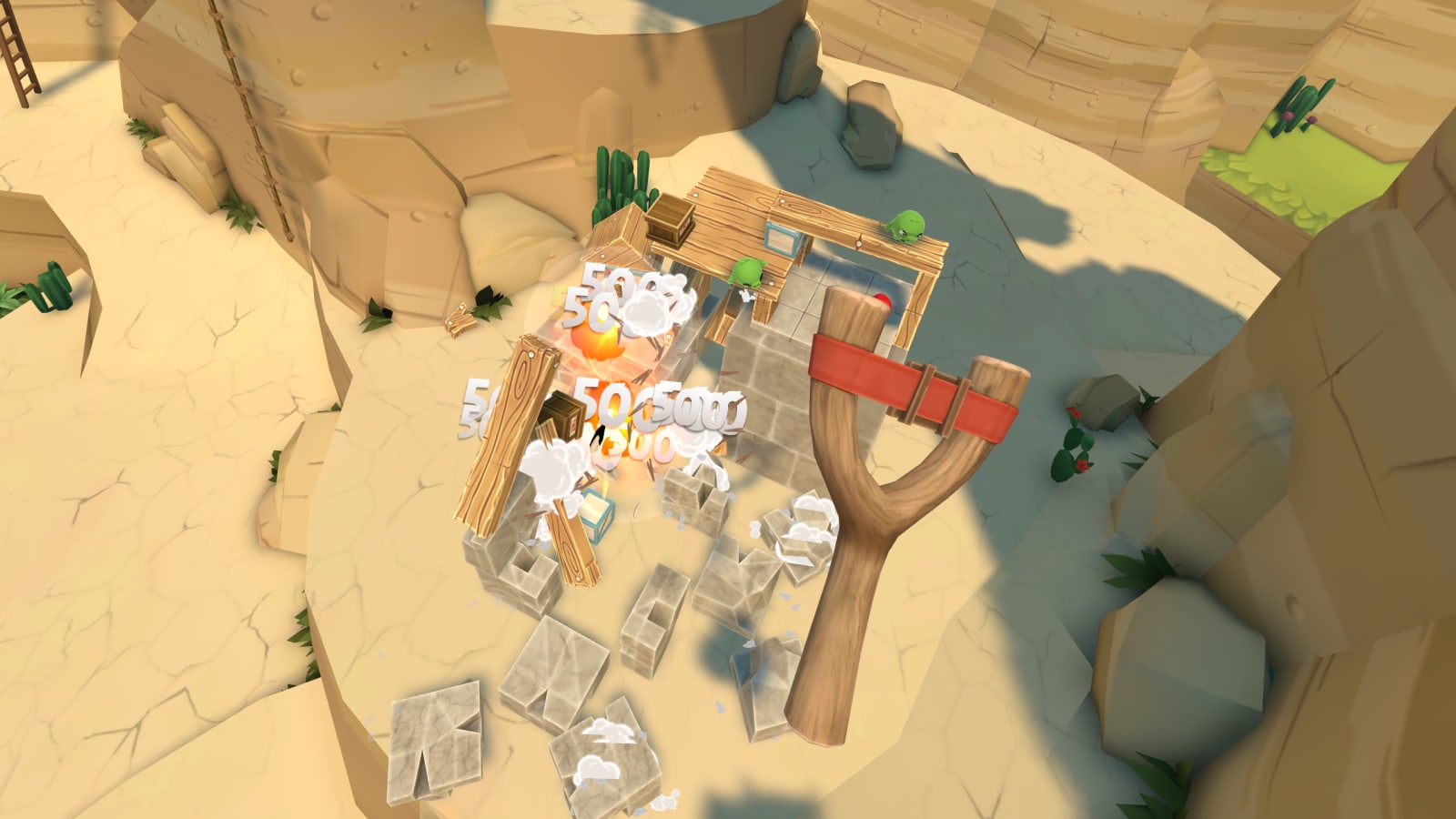 What's more, since players are firing upon a 3D structure in VR, they'll be able to transport around the buildings to specific vantage points, allowing them to take advantage of otherwise hidden weak points and inflict maximum damage with each shot. Unfortunately, you're rooted to each vantage point and can't walk around the structures at will. This adds an entirely new dimension of strategy to the game. It also allows for some cute easter eggs as well. For example, you can turn the slingshot around to face you and watch as the the facial expressions of the birds change the further back you draw the band.

I was afforded some time with the game during a demo on Monday and came away mildly entertained. The first person perspective adds a unique twist to the traditionally side-scrolling action and definitely increases the challenge of properly timing shots and the use of special abilities. At the same point, one of the draws of the original was that it was only as far away as your phone. It required virtually no prep work other than unlocking your homescreen, but with this, you've got to boot up a computer, put on the VR helmet, and go through that whole shebang. It's a lot of work to shoot avian missiles at porcene protections. Still, if you're enough of a fan of the franchise to have shelled out for the movie, this game could spawn a 3-star love affair. 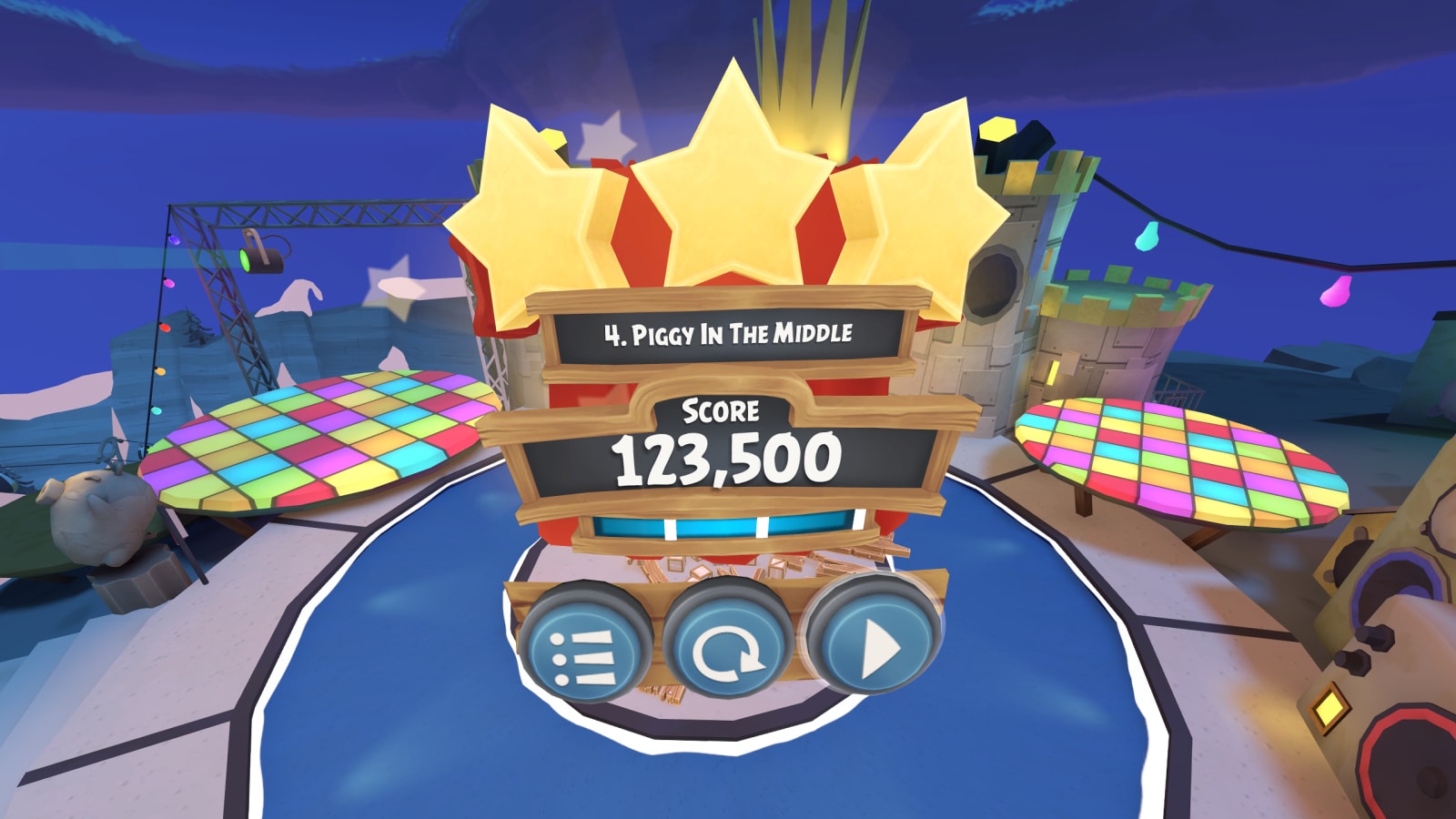 Overall, Isle of Pigs looks and feels just the way you remember the 2D version, down to the schmaltzy music and sound effects from the original. The difference here is that the VR edition is not free-to-play and will instead set you back $15 ($9 if you have a Viveport subscription). The app is currently available on the Oculus Store, Steam, and Viveport. The team is already planning to expand to other platforms, including PSVR, in the coming months.

All products recommended by Engadget are selected by our editorial team, independent of our parent company. Some of our stories include affiliate links. If you buy something through one of these links, we may earn an affiliate commission. All prices are correct at the time of publishing.
View All Comments
The first Angry Birds VR game puts the slingshot in your hand