A $200 portable synth that doesn’t disappoint.

The affordable-synth trend of the past few years has been outstanding for anyone wanting to dip their toe into soundscapes and dance music. IK Multimedia, known mostly for instrument accessories for iOS, seems to have noticed there's money to be made in the expanding market. Two things could have happened: The company could have done a money grab and released a low-cost digital synth that beeps, boops and whirs just enough to appease new musicians. Or it could have built a solid inexpensive analog synthesizer that's not only portable but also powerful. Lucky for us, it did the latter.

The $199 monophonic Uno is a strong hardware-synth entry from IK Multimedia. The two oscillators along with the 100 presets produce a wonderful array of sounds that made me wonder how something that looks the way the Uno does is creating audio like that.

A great-sounding analog synth could be good enough, but it also includes an easy-to-use step sequencer and arpeggiator. Getting a sequence into a synth is usually harder than it should be (or remarkably easy, after spending a few minutes with the instruction manual). I was building out strings of notes in about five minutes. Kudos to IK Multimedia for that.

Uno's ease of use has to do with most of the controls sitting directly on the face of the instrument. There's no digging into menus and submenus. Knobs of the most important features (volume, tempo, cutoff, and adjustments of the oscillators and filters) are up top. The two tuning knobs offer an impressive feat of making small adjustments to a sound, then once you hit a semitone, the continued turning of the knob now makes adjustments on an octave level. It takes a few minutes to get used to, but then I wondered how I ever lived without it. It does the work of two knobs.

The sounds coming out of the two independent oscillators of the Uno have a bit of a bite; think more Nine Inch Nails than Depeche Mode. It's not as gruff as the Arturia MicroBrute. It's closer to the ARP Odyssey. It may sound like an angry '90s synth band, but its design is straight out of the '80s.

The retro look is cool, but plastic hardware makes it feel cheaper than its $200 price tag. It actually feels more like a toy than an instrument. I was able to get used to the flat-touch keyboard and even used it to write a few songs. But going forward, if I'm doing any real work I'll hook it up to a MIDI keyboard with actual keys. 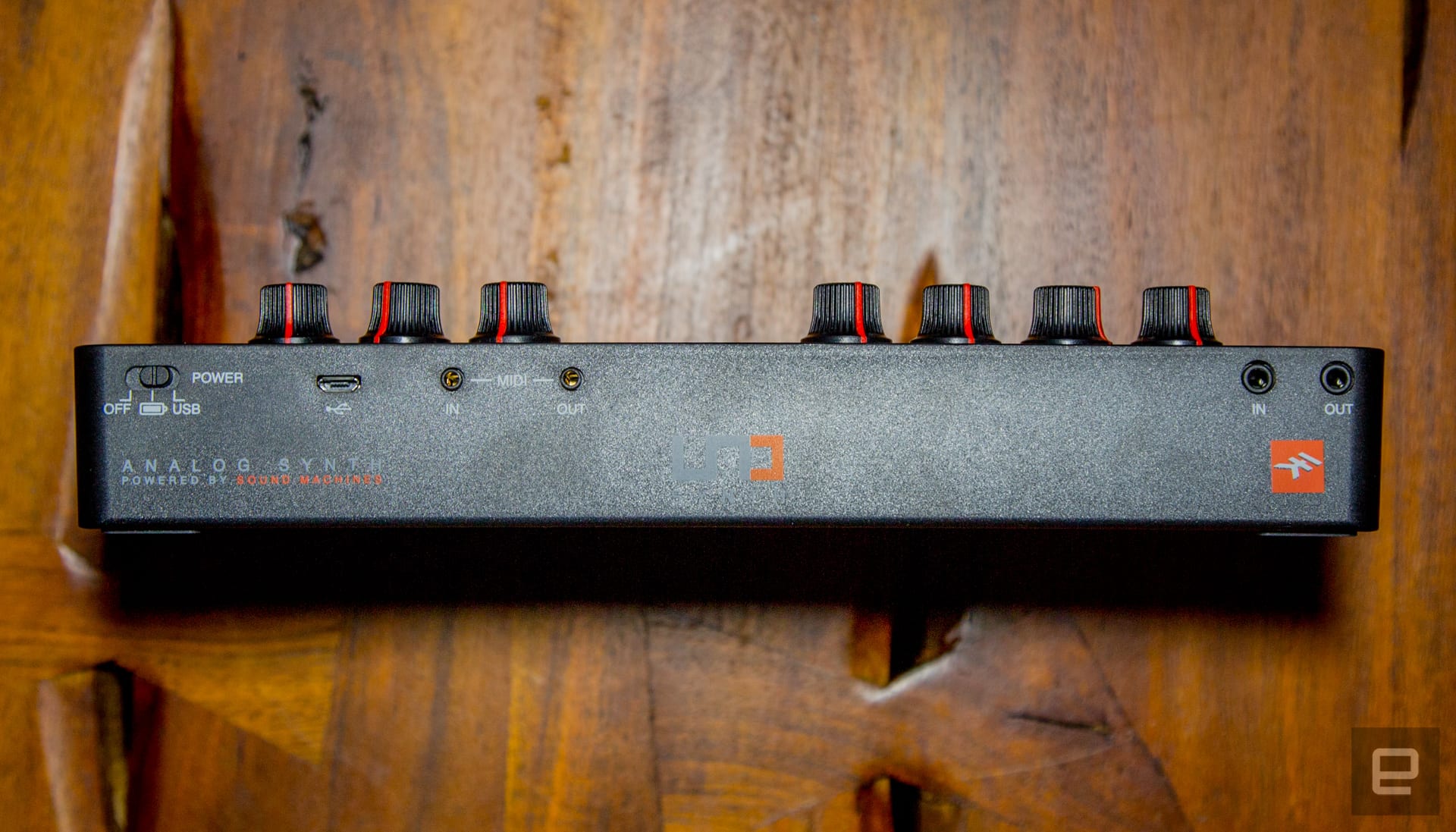 I'm also disappointed that the company opted for a mini-jack instead of proper quarter-inch audio out port. I know nearly every device in this segment is moving this way, but to me, it immediately screams, "This is not built for performances! Sit in your room with this!" Which is a bummer, because I think the Uno would be a great addition to a local band's rig.

The flipside to the cheapish case and flat keys is that the Uno is small, light and easy to toss into a bag without a lot of fuss. Because it's an IK Multimedia product it still connects to your computer and iOS device for access to deep functions. I'm not a fan of having to use a computer with an instrument, but here I'm OK with it mostly because the synth's light weight makes it perfect for the musician who travels but still needs to work on fine tuning a track or just putting down some quick ideas. Hooking up the Uno to an iPhone or computer and tapping out a few tunes is easy and doesn't require any more gear than you're already traveling with.

Overall, the IK Multimedia Uno synth is an outstanding value and an impressive first step into the synth-hardware world for the company. It sounds great, has a ton of features and is approachable for new musicians. I do wish it felt more solid in my hands. But it's so lightweight that it almost cancels that issue out. Almost.

All products recommended by Engadget are selected by our editorial team, independent of our parent company. Some of our stories include affiliate links. If you buy something through one of these links, we may earn an affiliate commission. All prices are correct at the time of publishing.
View All Comments
IK Multimedia’s Uno synth packs big sound on a small budget