Transforming your camera's RAW sensor data into a usable image is calculation-intensive and sometimes, your computer doesn't have the muscle to get it right. For the next version of Lightroom, Adobe has introduced a feature called "Enhance Details" that uses AI to tackle the process, called "demosaicing." The neural network works on Bayer images (Canon, Nikon, Sony, Olympus) as well as X-Trans (Fujifilm) to increase detail while reducing problems like moire and false colors.

Demoisaicing is particularly tricky in parts of an image with lots of texture, detail and colors. "Myriad mathematical calculations are required to perform the interpolation necessary to build an image," Adobe stated in a white paper. "This takes time, even on the most powerful computer hardware. As a result, software like Lightroom is constantly balancing the tradeoff between image fidelity and speed.

The problems that typically crop up are the loss of small details, false colors across sharp edges, moire, edge blurring (zippering) and more. Using Adobe's Sensei, Enhance Details was trained extensively in the cloud so that it can use the hardware on your PC or Mac. "We trained a neural network to demosaic RAW images using problematic examples, then [use] machine learning built into the latest Mac OS and Windows 10 operating systems to run this network," said Adobe. 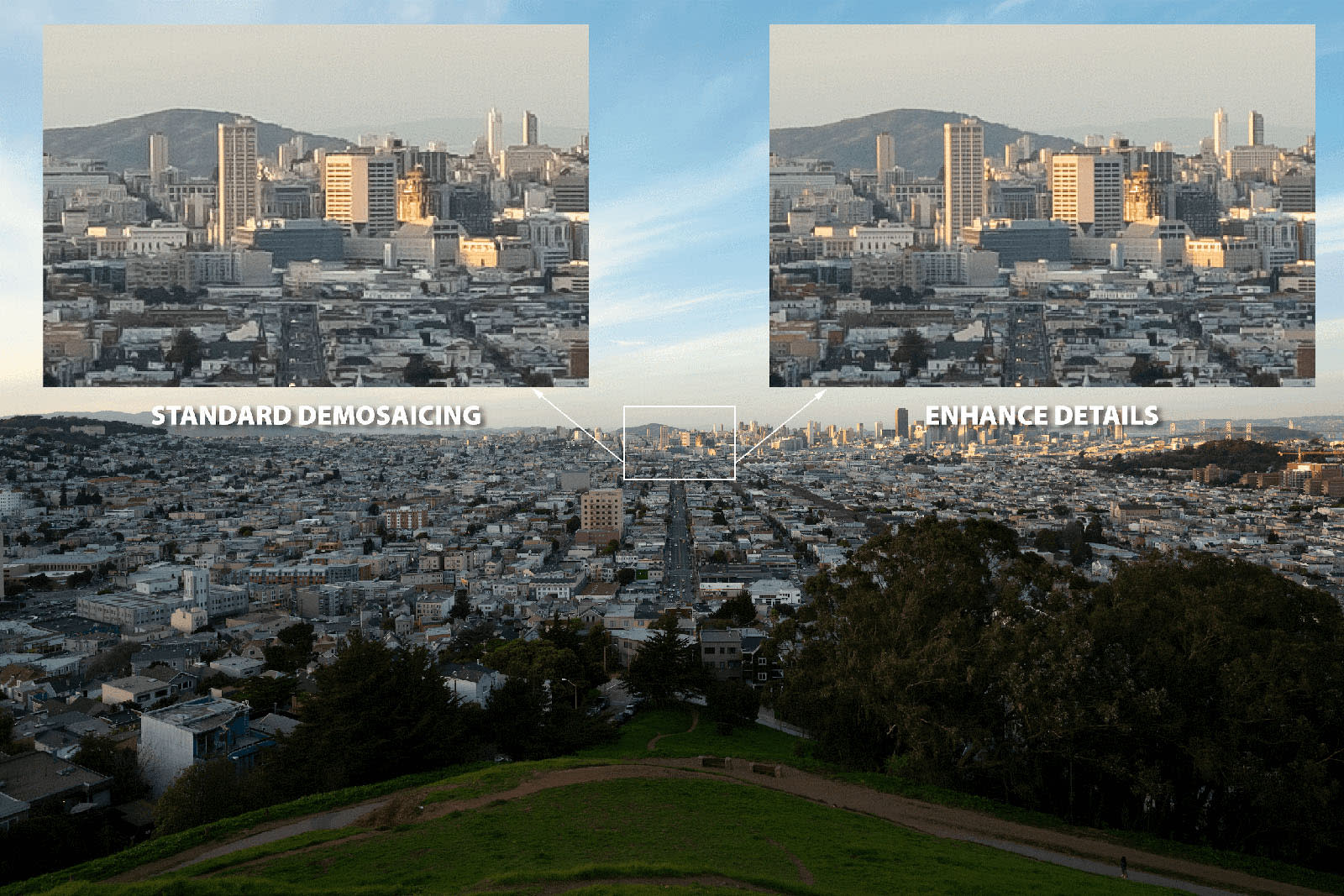 The result is a up to 30 percent more resolution in Bayer and X-Trans RAW files, and it comes organically from your camera's sensor, rather than being generated artificially. There are a few caveats: You need a relatively powerful computer, and the process is only useful for images meant to be printed at a large size, or those with lots of details or artifacts.

On top of the enhance feature, Adobe added HDR, Pano and HDR Pano merge tools, along with a targeted adjustment tool and histogram clipping indicators. The HDR and Pano functions make it easier to combine multiple images to create images with more dynamic range, either in regular or panoramic formats.

Lightroom CC now has a targeted adjustment tool that makes it easy to fine-tune specific parts of an image, like the sky. The histogram clipping indicators show areas that are too dark (in blue), or too light (red), helping you deal with under- and over-exposed areas of an image. Finally, Adobe has added photo sharing to its Lightroom iOS app, and fixed bugs in the Android and ChromeOS versions, "making way for new features coming soon." The release will start rolling out today to Creative Cloud users with access to Lightroom CC.