There's a lot to build and discover in this ghostly school.

As much as we like to shake our metaphorical canes at kids and lament how they're all about Minecraft and Fortnite these days, the truth is that they're still really big into physical play too. Children still love Lego, both the plastic bricks and the worlds they can create with them. However, the company is now going to try to unite all these different aspects -- building, video gaming and storytelling -- with its new AR-based line, Lego Hidden Side. Kids can construct sets and bring them to life using their phones, with a continuing narrative to keep them coming back for more.

Hidden Side isn't Lego's first foray into augmented reality. In the past it's experimented with letting you use AR to preview toys in the store, and last year the Lego Playgrounds app used ARKit2 to add animation and other flourishes to existing sets. Hidden is the first line designed around the tech, with a storyline that's only fully accessed through the app.

Lego Hidden revolves around two students, Parker and Jack, who end up investigating the supernatural in their small town of Newbury. The initial building sets include locations that would be instantly familiar to any kid with a penchant for urban fantasy: a high school and a graveyard. Once assembled, each kit has secrets that can be unveiled by pulling and pushing different parts, like the school will sprout evil eyes and claws when you turn the clock attached to the front of the building. But the real surprises come when kids point a phone camera at it and look through the app. Then the set will be infested with ghosts that they need to investigate and zap and then send data about them back to their professor, J.B. 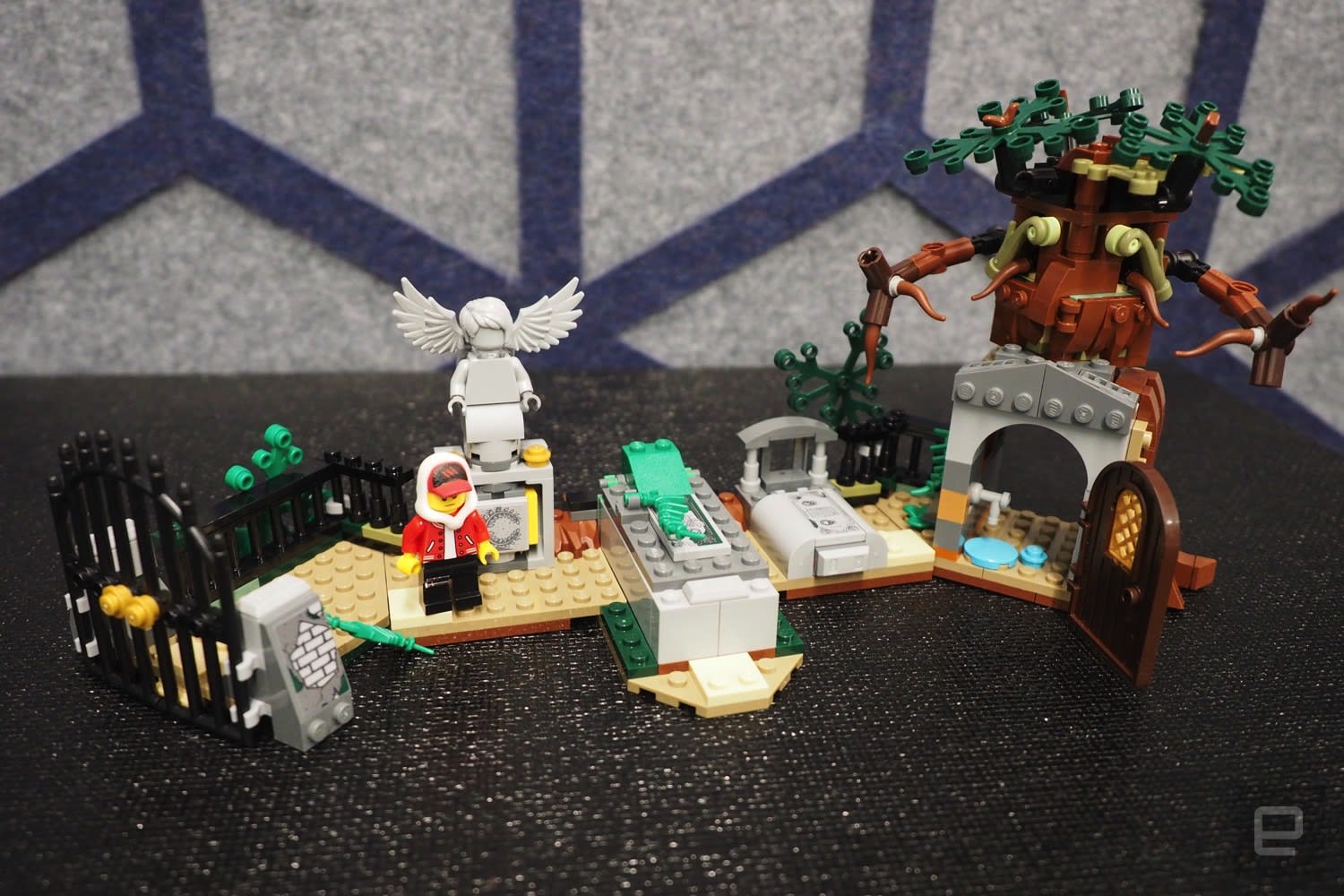 What's especially cool, though, is that the kids aren't done with the physical set just yet. Their investigation requires them to open doors, turn knobs and even open up graves. Just tapping on a screen isn't going to cut it. The actions can all be done one-handed for those playing solo, but children playing together might choose to delegate each task instead.

The app recognizes each set by its general shape; while it doesn't have to match exactly, the app looks for a unique profile so it knows what activities it needs to load. This means that kids can't go rearranging things willy-nilly like they would with other Lego sets, building the model on the box and then deconstructing it and creating something entirely new. In order to keep playing, they need to leave the sets in their standard configuration. This obviously seems limiting: In fact, a constant criticism of Lego's licensed sets is that they limit kids' imaginations by discouraging them from making free-form constructions, so this would be the pinnacle of that. 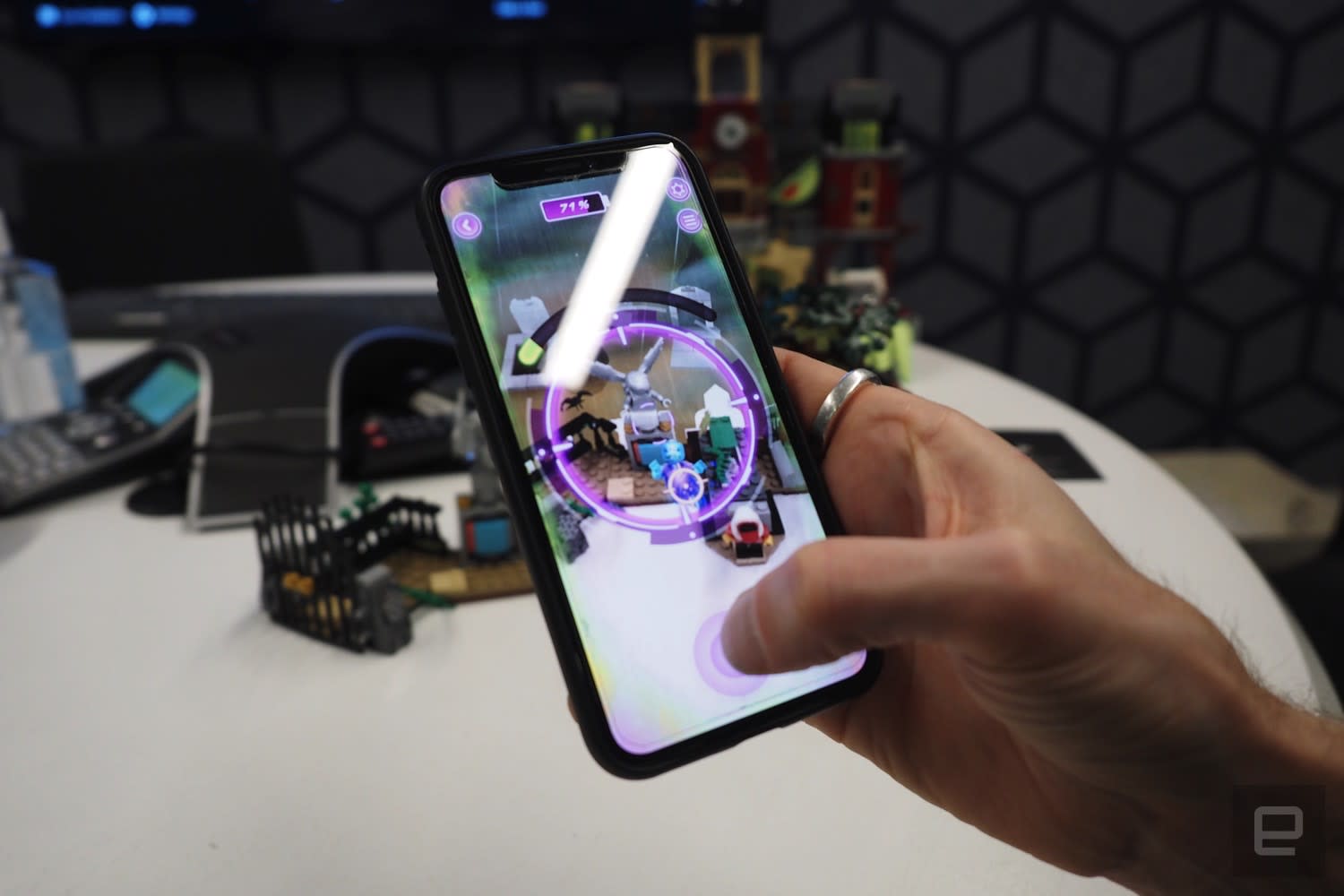 However, instead of limiting how kids can play with the sets, the app actually just replaces the standard types of play with something different. Lego wants Hidden Side to be a service rather than a standalone game, so it's going to be constantly updated with new missions for kids to take on. That way they can keep coming back to find something new to do. For now there aren't any push notifications, so Lego is relying on curiosity and word of mouth for youngsters to find out that there's new content to check out.

To keep the entire thing compliant with the Children's Online Privacy Protection Act (COPPA), the app doesn't save any information in an account: Everything stays on the device, which is a real bummer if kids have to switch phones or tablets. However, Lego hasn't ruled out the possibility of syncing Hidden Side up with the Lego Life app, which would allow some data to be maintained while still protecting kids' privacy.

Lego Hidden Side will launch this summer, with the cheapest set costing $20 while the school (complete with spooky claws) will run $130. The app will launch around the same time for Android and iOS at no cost -- not even in-app purchases. Lego knows it'll make more than enough money in building sets as parents struggle to keep up with their kids' new Lego addiction.

Update (2/17/18): Added video and new gallery of photos from Toy Fair, including images of some of the other six sets available at launch.