A promise of a faster, less-congested network.

Samsung's Galaxy S10 and S10+ have a lot going for them; their luscious OLED displays, the in-screen fingerprint reader, and they each have three rear-facing camera lenses. Another interesting feature on both these phones (as well as on the lower-end S10e), is the support for WiFi 6, the very latest in WiFi standards. In fact, Samsung claims that the S10 series of handsets will be the first-ever to adopt WiFi 6. I had a chance to test this out following the Galaxy Unpacked event earlier today, and though there are a few significant caveats, I did think it was a lot faster than I expected.

To recap, WiFi 6 is another way of saying 802.11ax, and will be the WiFi standard of the not-too-distant future. It promises over 10Gbps speeds under ideal conditions, but more importantly, it will supposedly allow double the amount of data streams, which will help limit congestion. That means more simultaneous 4K streams, gaming and file-downloading than ever before. It also promises something called Target Wakeup Time, which will apparently extend the battery life of devices like smart thermostats and locks by avoiding frequent device wake calls. In short, WiFi 6 is for the home of the future. 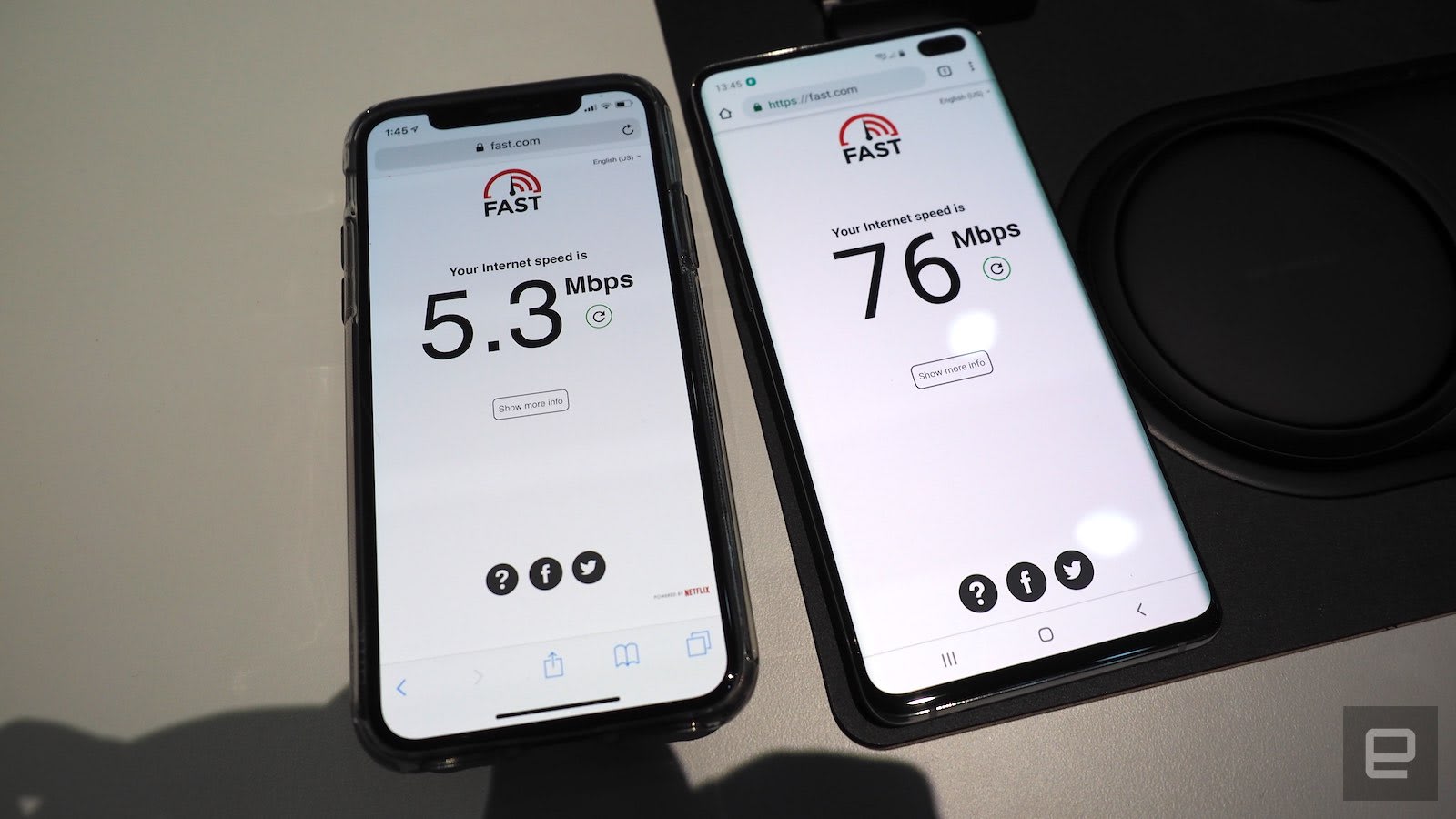 Following the Samsung Galaxy Unpacked event, I noticed that several S10s in the demo area were connected to a WiFi 6 network; there's a tiny number 6 on the top right of the WiFi symbol to indicate this. There were well over a hundred different S10s at the event, and I can't be certain that they were all hooked up to the same WiFi router, but a vast majority of them did have a WiFi 6 symbol. I ran a speed test on a handful of these phones (I used the browser and loaded fast.com), and found that most of them had speeds of 76Mbps. No, that's not really a blockbuster speed, but based on my experience, that's still a lot better than the WiFi speeds at most large-scale events.

I went ahead and changed the WiFi network on some of them to a separate WiFi SSID at the event (it was the SSID meant for press and attendees), and saw that the 6 symbol was no longer there, which tells me that this particular WiFi network did not support WiFi 6. Then I ran the speed test again, and it was much slower; around 6Mbps (I also ran the same speed test using my iPhone XS -- pictured above -- on the aforementioned event WiFi network, and it was around the same speeds). 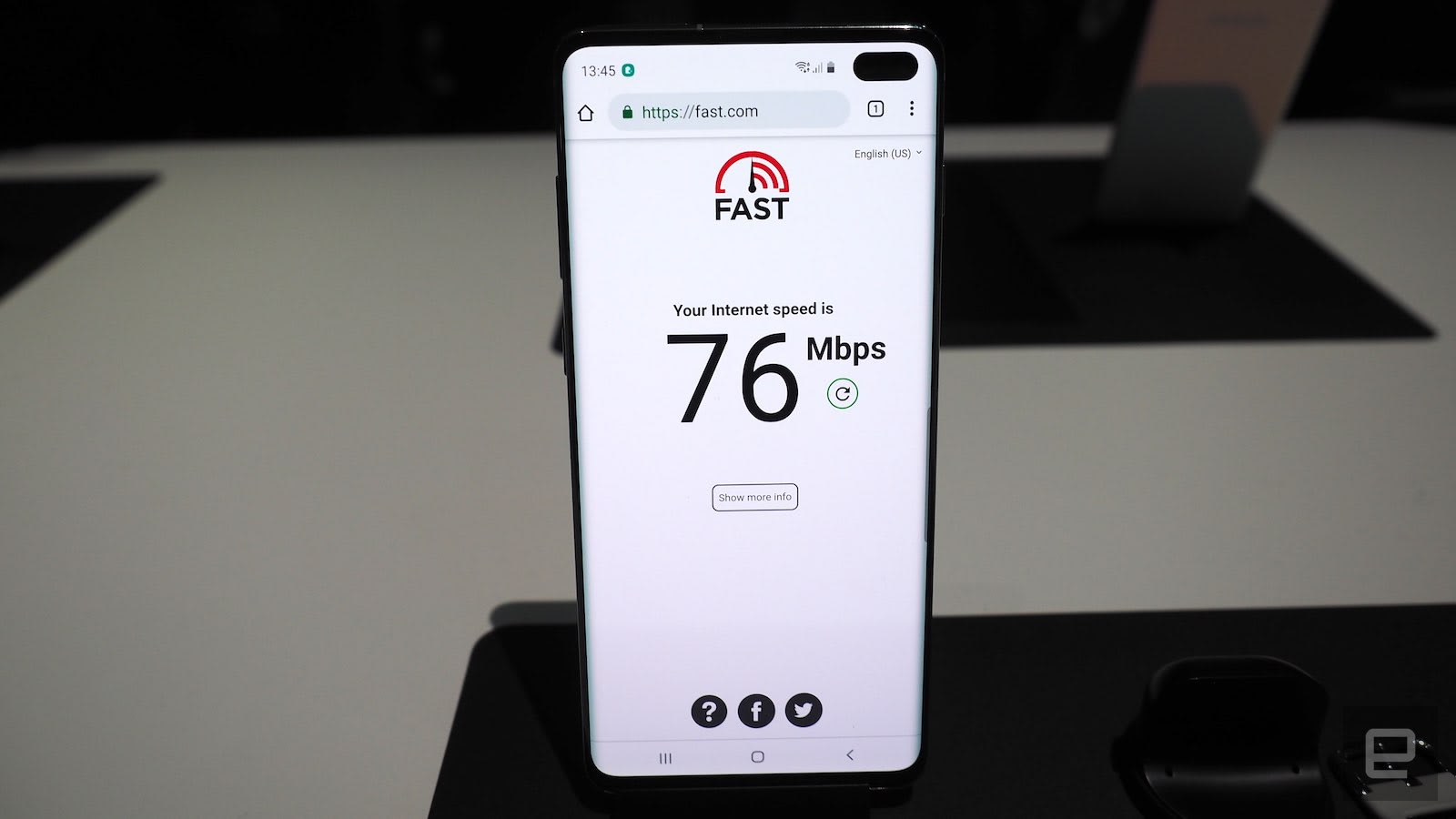 There are too many variables to really say one is definitively better than the other -- there's no telling how many devices were connected to each network, and I don't know if the routers were in the same room or what their settings were. Plus obviously this was in a relatively controlled environment, and Samsung probably made sure the WiFi speeds for the S10 demo phones were better than average. But considering that most event WiFi speeds are very dire -- certainly closer to the 6Mbps end of things -- I was still fairly impressed to see the WiFi 6 phones clock in at that aforementioned 76Mbps.

This doesn't mean you need to go out and get the S10 immediately if you want a WiFi 6 phone. For one thing, WiFi 6 isn't widely available right now; there aren't that many WiFi 6 routers on the market, and they're pretty pricey at around $300 or more each. Plus, there will most definitely be more WiFi 6 phones in the future; the S10 is just the first out the gate. But, if you're in the market for a new phone, and you want one that's pretty future-proof, then the S10 might not be a bad idea.

All products recommended by Engadget are selected by our editorial team, independent of our parent company. Some of our stories include affiliate links. If you buy something through one of these links, we may earn an affiliate commission. All prices are correct at the time of publishing.
View All Comments
Samsung's Galaxy S10 provides a sneak peek at WiFi's future