Samsung Galaxy S10e hands-on: High-end, but not too high

This year, Samsung’s most charming flagship is its cheapest.

Right around this time every year, Samsung releases a pair of glamorous, high-end Galaxy devices, meant in part to set the smartphone standard for months to come. For four years now, this has been about as concrete a smartphone tradition as you'd find. Of course, some traditions don't last forever. There's the whole change-of-scenery thing going on for this announcement, but this year, Samsung's Galaxy has grown a little bigger and a little smaller. Meet the Galaxy S10e.

At the risk of sounding a little reductive, it's the scaled-back, cheaper version of the flashy S10 all those rumors and leaks suggested we'd see. After a bit of hands-on time, though, it's clear the S10e offers more than its description suggests. Of the four smartphones that Samsung unpacked today, the S10e is one of the most important, even if the reasons that make it so aren't exactly unique. But first, we need to talk about what this phone brings to the table and what it left behind in favor of reaching more people.

While the Galaxy S10e is easily the most modest of Samsung's new phones, it never feels like it. Like its big brothers, the S10e leans on Qualcomm's Snapdragon 855 chipset, this time paired with either 6GB of RAM and 128GB of storage or 8GB of RAM and 256GB of storage. (Don't worry: Both versions have microSD slots in case that's still not enough room for you.) The phones in the Galaxy S10 series are the first Snapdragon 855 devices we've actually been able to pick up and use this year, and it shouldn't surprise you to hear that even the lower-end S10e runs wicked fast.

Whipping through apps, multitasking furiously and swiping though Samsung's improved One UI on Android Pie -- all of it felt instantaneous. Then again, of course it would; if nothing else, the 855 offers a level of performance headroom the 845 didn't, and we haven't been able to push the new chipset to its limits yet. And just so we're clear, Qualcomm isn't doing all the work here. Samsung says the S10e, like the others, is smart enough to preload certain apps and allocate memory when it thinks the time is right, then kill those apps when it suspects you're finished. But we'll have to see how well that actually works in the real world. The important thing to keep in mind is that despite being less expensive than the S10 and the S10+, the S10e is every bit as fast.

So yeah, the S10e shares a powerful foundation with the rest of the lineup. Look more closely, though, and the differences become much more apparent. Consider the display: This year, Samsung embraced a new kind of Dynamic AMOLED panel for its flagship phones, which means these screens are HDR10+ certified and feature improved brightness and color accuracy. That goes for the S10e, too, but at 5.8 inches, this 19:9 screen is the most compact of them all. It also runs at the lowest resolution of the three, but that's not much to get worked up over since it still runs at Full HD+. And beyond that, Samsung ditched the curved glass it tends to drape over its premium screens in favor of a flat plate, probably to keep costs down.

Taken individually, these factors all sound pretty minor. Together, though, they make for a screen that, while great to look at, doesn't feel particularly premium. I can't say I'm surprised though: High-spec screens are often the first thing to get the axe when a phone maker builds a budget device.

Even with all that said, this is far from your average smartphone screen. You can't not look at the phone's hole-punch display, which leaves a small space in the top-right corner to accommodate a 10-megapixel, front-facing camera. This isn't the first time we've seen one of these in real life -- we spent some time with the Honor View 20 not long ago -- and I'm happy to report that after a few minutes of playtime, your eyes will naturally start to gloss over the hole entirely.

While all three of the new S10 screens pack a camera hole, the S10e's is the only one that lacks a fingerprint sensor underneath it. Instead of relying on Qualcomm's novel (and pretty dang quick) ultrasound-sensing tech, Samsung went with a more traditional fingerprint sensor embedded high on the S10e's right side. (The company wouldn't elaborate on why it's here instead of, say, on the phone's back.) It sits right where my thumb does, so I'm perfectly pleased, but I could see this approach being a little less pleasant for lefties.

The last major difference between the S10e and its siblings is its cameras. It uses the same f/2.2, 16-megapixel ultra-wide camera and variable-aperture 12-megapixel main camera (with optical image stabilization!) as the bigger models, but it lacks a 12-megapixel telephoto camera. If I'm honest, this isn't much of a surprise either -- I'm just glad that the cameras the S10e does have are arguably the more useful ones. For me at least, taking a step in to get a tighter look at my subject is much less troublesome than taking a few steps back to get more in my frame. And since this ultra-wide camera was designed to capture a field of view as wide as what the human eye can perceive, it does a good job at making sure what we see is actually what we get.

Samsung worked in a number of clever software tricks here, from a shot-suggestion mode that nags when you're not lined up properly to a night mode that (hopefully) gets close to Pixel 3 quality in the dark. All told, though, the S10e mostly feels like a polished version of the camera we got last year. Granted, I didn't get to spend a ton of time with the phone, but the few photos I did take were up to Samsung's usually high standard -- they just didn't seem dramatically better than what you might be used to. At least there are some substantive improvements on the video side: The S10e's front and rear cameras can record in 4K HDR, in case you wanted to get your mobile-filmmaking career going.

My only real concern at this point is the S10e's battery: It uses a relatively small 3,100mAh cell that Samsung says can run for 24 hours straight off a single charge. I'd like very much for that to be the case, and the combination of a Full HD screen and Samsung's seemingly helpful software tweaks could get it there, but we'll have to see. The rest of the S10e package, from its lively finishes to its IP68 water resistance to its surprisingly comfortable design, is just what you'd expect from a Samsung phone.

Of course, we need to address the elephant in the room: This approach feels very, very familiar. Apple embarked on a similar road last year with its iPhone XR, a slightly dialed-down version of its flagships with eye-catching looks and absolutely phenomenal battery life. Everyone had their opinions about the device, but Apple has been clear about the impact the XR has had: It is currently the company's best-selling smartphone, and it has been since the day it launched.

Samsung's flagship phones always tend to sell well, but by embracing this mindset, the company is opening itself up to a new group of customers who want premium power and features but feel a little gun shy when it comes to dropping nearly $1,000. The bigger question in all of this is whether Samsung will find the same success here that Apple did with its XR. After all, if you love iOS, there are very few options. That's obviously not the case for Android fans, who can go and shell out between $500 and $600 for a smartphone with premium specs and hardware. That broad landscape of choices means the S10e will immediately face stiff competition, and Samsung is gambling that its reputation and its strong hardware will help it find ground in a crowded market. 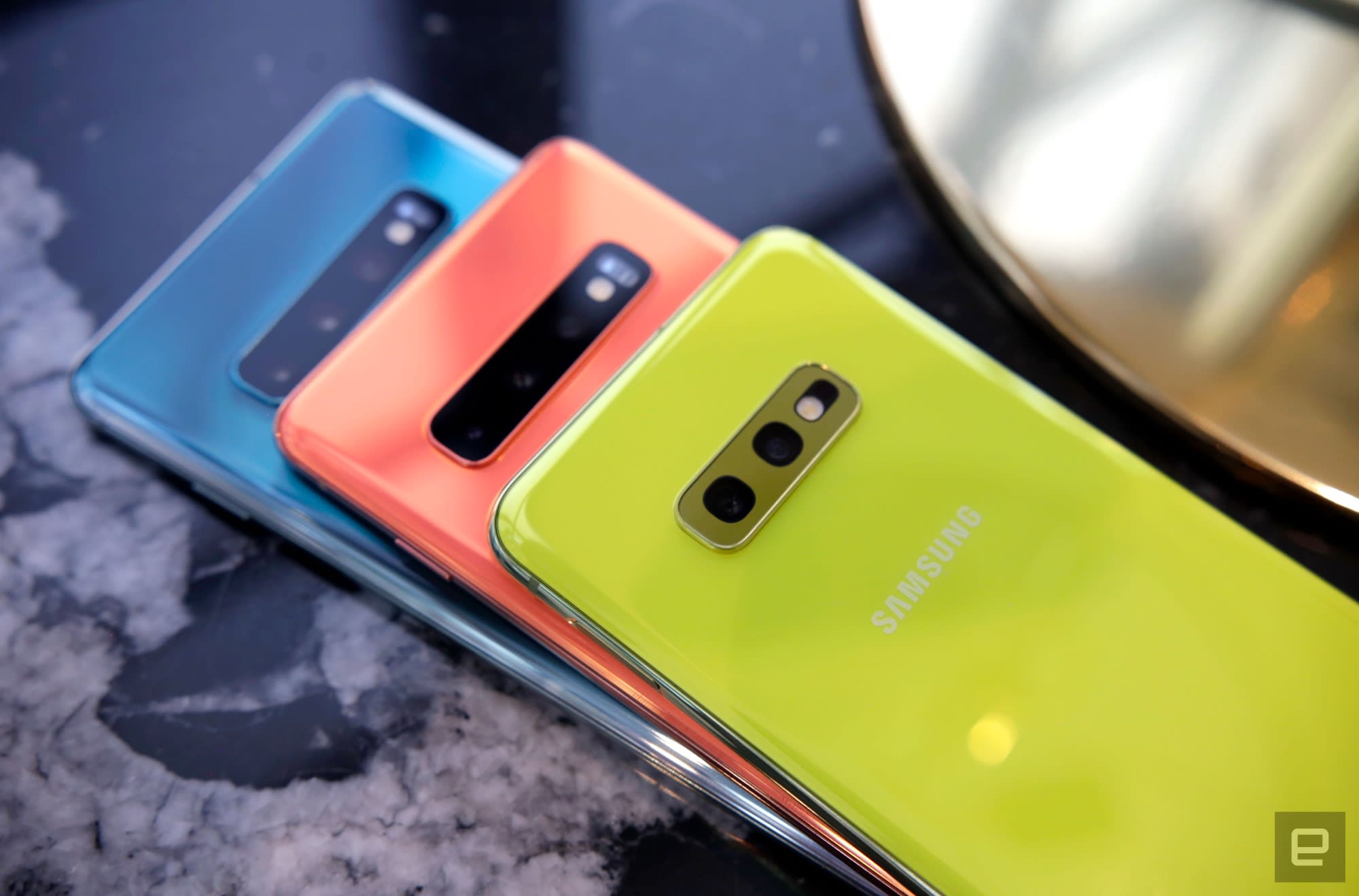 Whether this thing succeeds the way Samsung wants it to is almost less important than the fact that the company is trying. Giving more people access to powerful performance and premium Android features is a worthy result, even if the company is really just trying to sell more phones. Maybe Samsung will eventually compete with the OnePluses of the world by shipping a full-on flagship of a smartphone for even less money. It won't get there without experience, though, and the S10e is the company's first concrete step down that path.

And beyond all of that, the S10e feels charming in a way neither of its siblings can match. It's small! It's cute! It's also crazy powerful! We haven't spent much time together, but my gut says this is the version of the S10 I'd choose for myself. Samsung was clearly keen to break with some long-standing traditions this year, but based on my time with the S10e, a cheaper Samsung flagship is one new tradition that deserves to continue.