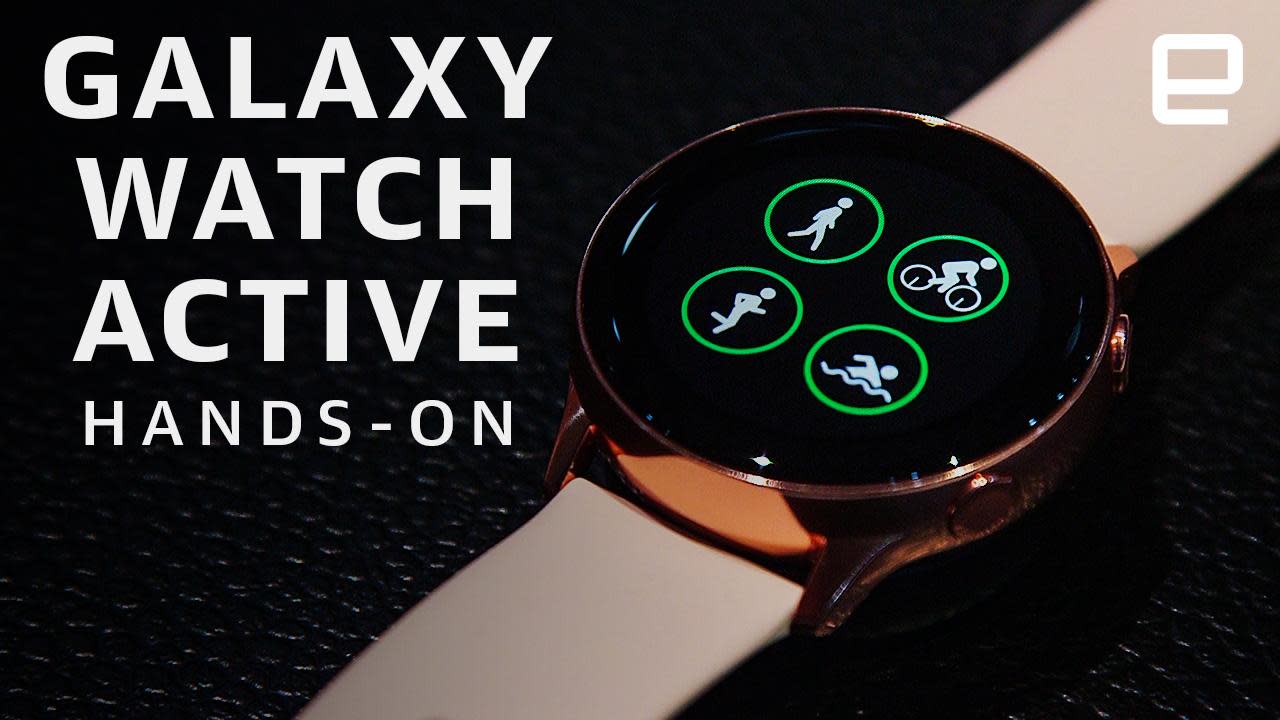 Samsung's updated watch is a stripped-down version of what came before it. Amid all the four (four?!) new phones Samsung paraded out at its Unpacked event, the Galaxy Watch Active is Samsung's newest smartwatch, with a design that feels less aggressive, not to mention less chunky.

For starters, the rotating bezel is gone. That's arguably the biggest aesthetic change here, and I think it's for the better. The Galaxy Watch Active isn't really trying to be an analog watch this time around; with one less control option, it relies heavily on an intuitive swiping interface. A mix of lateral and sideways swipes help you get from one function to another. (And maybe it's just me, but it feels like it runs faster than last year's Galaxy Watch.)

There are still two buttons, however. The upper one acts more like a home shortcut while the second helps for finer on-screen controls (think: numbers). It also serves as a shortcut for wireless payments through Samsung Pay. Both buttons only protrude slightly from the frame, adding to the sleek new design. The 1.1-inch screen is protected by Gorilla Glass 3 and the whole package is water resistant. Like the Apple Watch, you can long-press a button to put it into a water-resistant mode, at which point it'll be swim ready.

The watch itself will come in silver, black, rose gold or sea green finishes, depending on the country where you happen to be shopping. I got to handle the black and rose gold models and also got to try on the new, softer plastic wrist straps, which make the device feel well suited for its primary use case: exercise.

Feature-wise, the Galaxy Watch Active lives up to its name, with upgraded fitness tracking features that include the ability to monitor blood pressure and stress levels. That's in addition to the heart rate monitor that we've seen on older Galaxy smartwatches. The blood pressure monitoring system pairs with a mobile app to help you monitor your stress levels. When you're feeling the pressure, the device shows breathing exercises and other calming techniques. The stress of a Samsung event were apparently not enough to trigger it, at least not during my time with it.

For workouts, upgraded fitness tracking features will now detect several relatively straightforward exercises like running, biking and rowing. For other exertions, you can manually choose from 39 activities, according to Samsung. After some cursory browsing, it seems these these include push-ups, burpees and even bench presses. Simple icons mean you can swap in your four most frequent sports or exercises, too.

Sure, the Galaxy Watch Active might not be game-changing, but it is a refined attempt at a fitness smartwatch. (And as someone who uses an Apple Watch primarily for fitness tracking, this approach makes sense to me.) While the chunky bezel might have been Samsung's wearable USP, I'm not sure many were buying it. A sleeker, sporty makeover might stand a better chance.

In this article: entertainment, gadgetry, gadgets, galaxywatch, galaxywatchactive, gaming, gear, hands-on, s10, s10e, s10event, s10plus, samsung, samsunggalaxy, smartwatch, unpacked 2019, video, wearables
All products recommended by Engadget are selected by our editorial team, independent of our parent company. Some of our stories include affiliate links. If you buy something through one of these links, we may earn an affiliate commission.