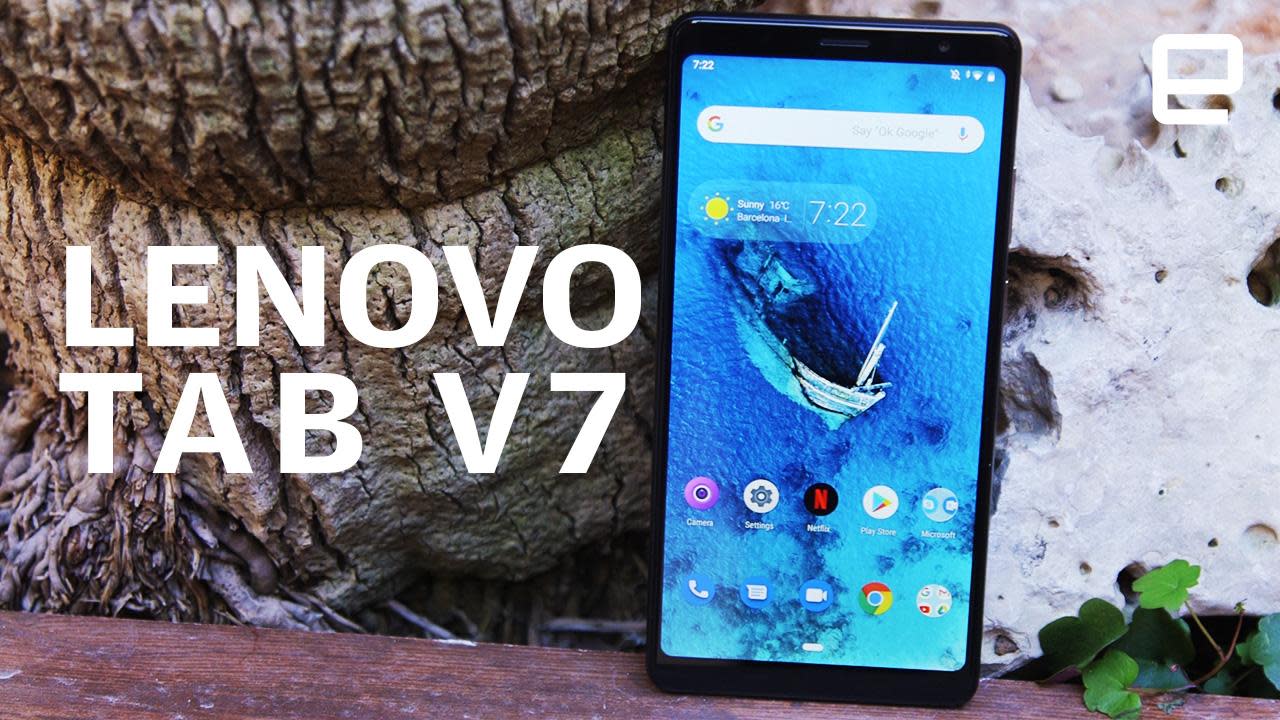 Bigger isn't always better, but sometimes it's exactly what you're looking for. That seems to be the line of reasoning behind Lenovo's new Tab V7, a device that — despite its name — is definitely more a smartphone. The V7 isn't the most powerful machine in the world, nor does it have the most impressive cameras or the most eye-catching design. For people in developing markets who face long bus or rail commutes, though, a phone with a screen big enough to lost in while watching videos just might fit the bill perfectly.

The Tab V7 packs a whopper of a 6.9-inch display running at 2160x1080, and I know what some of you are thinking — this thing must be a serious handful. Well, you'd be right: it's an 18:9 screen so it's a little more manageable than you might assume, but the Tab V7 is definitely better suited for people with big hands (or those who plan to just rest the phone in their laps most of the time). Still, it's more than pretty enough for plowing through some locally stored videos, and the two Dolby Audio-tuned speakers can get almost surprisingly loud when you really need to bring the noise. It does run surprisingly well, though, because of the octa-core Snapdragon 450 ticking away inside. Depending on the model you go for, you'll wind up with either 3 or 4GB of RAM and either 32 or 64GB of internal storage. Regardless of your decision, though, you'll still be able to whip through a few rounds of Brawl Stars without any complaints. (That's how I spent the 30 or so minutes after I shot the video you see above.) And beyond all that, the Tab V7 runs a surprisingly clean build of Android 9.0 Pie -- Lenovo has used some pretty overbearing interfaces in the past, so this is a pleasant change of pace.

The rest of the particulars here aren't all that thrilling -- the 13-megapixel camera takes decent enough photos but the few I took were ultimately nothing to write home about. The 5-megapixel camera up front was somehow even less exciting.

If anything, the real all-star here is the phone's massive battery: it's a 5,180mAh cell that puts to shame most of the others we've seen in smartphones this year. (Seriously: it's even more capacious than the dual battery system in Samsung's Galaxy Fold.) It's hard not to imagine this thing getting at least two days of life off a single charge, especially considering the power-sipping chipset, but it's not hard to imagine a person with a crippling Fortnite addiction just running this thing into the ground.

All told, what the Lenovo Tab V7 lacks in sheer thrill it makes it for with sheer spacious practicality. My only real gripe? That, despite its world tour through Latin America, Asia Pacific and parts of the Middle East, it's unlikely we'll ever get to use this thing in the United States.

In this article: gear, lenovo, lenovo tab v7, mobile, mwc2019, phablet, smartphone, tab v7
All products recommended by Engadget are selected by our editorial team, independent of our parent company. Some of our stories include affiliate links. If you buy something through one of these links, we may earn an affiliate commission.