Nokia 9 PureView hands-on: A taste of our photographic future

Unless you love cameras, this phone might not be for you.

We got by for years with one main camera on our smartphones. Then dual cameras became a thing, and now, the industry is steadily moving toward three as the norm. Surely that must be enough, right?

Normally, I'd say yes, but HMD Global — the company behind Nokia's smartphones — have made a pretty compelling argument for five cameras with the new Nokia 9 PureView. All of those sensors work in tandem, and after testing the phone in New York, it's clear that there's an underlying method to this photographic madness. It honestly still feels a bit like overkill, but it's focused overkill, and if nothing else, the Nokia 9 offers a glimpse of how the future of smartphone photography might work.

For now, though, you should know this: unless you really, really care about cameras, this probably isn't the smartphone for you. HMD has essentially said as much. It's going to launch this year as a limited edition device meant for camera nerds, and while the company hasn't confirmed how many it plans to make, there probably won't be more than a few thousand of these things floating around. I get HMD's rationale — the Nokia 9 PureView still feels highly experimental — but the combination of these crazy/clever cameras and modern specs make it a tantalizing option for around €599. 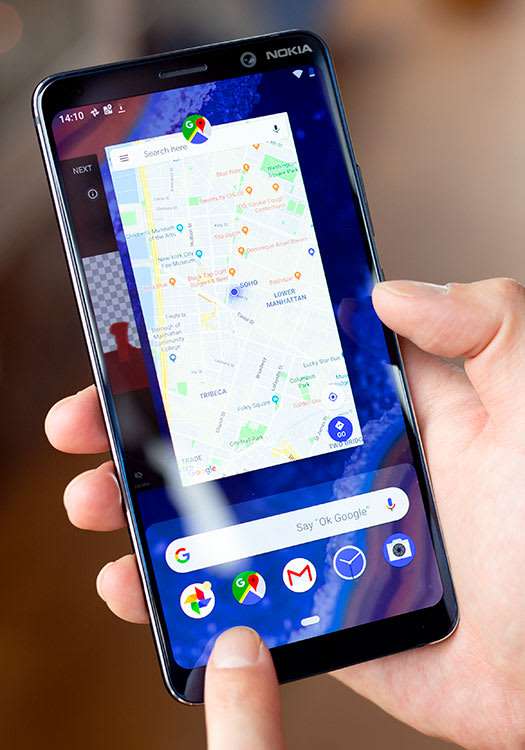 The phone packs a 5.99-inch P-OLED display running at 2K and (sigh) one of last year's Snapdragon 845 chipsets, along with 6GB of RAM and 128GB of storage. There's an optical fingerprint sensor nestled behind that screen too, though I honestly didn't get to try it out. And beyond all that, the Nokia 9 is kind of a beauty (as long as you're not weirded out by all those camera holes around back.) The model I played with was a subtle, luminescent blue coated in Gorilla Glass, and supports Qi wireless charging and gigabit LTE where available. You Android purists have reason to be pleased, too: like just about every other Nokia smartphone out there, the Nokia 9 runs a very clean, Android One-certified build of Android 9.0.

The thing is, these specs are among the least interesting things about the PureView — let's talk about those cameras. All five are 12-megapixel sensors, but only two of them shoot in color. Curiously, the other three are monochrome sensors meant to give your photos heightened contrast and detail. Most other multi-camera smartphone setups involve a mix of wide, ultra-wide and telephoto sensors for added flexibility, but not this one. You can't use just one of the cameras, either — unless you're shooting in monochrome, they're all working, all the time.

The way these cameras work together is, conceptually at least, a lot like traditional HDR modes. Instead of one camera stitching together multiple exposures, though, the Nokia 9 collects and combines image data from each of those five cameras to produce more nuanced photos. In case you're not so great at math, that's a lot of information to process at once — we're talking between 60 and 240 megapixels of data per photo, all of which gets churned into a single file. (Since this is a phone for people who really care about photography, you can naturally also save all your images as RAW files.) The other benefit of having all these cameras is that, together, they produce a much more sophisticated depth map of whatever's in your frame, so you're given options to very minutely tweak the level of bokeh in your photos once they've been captured.

I'll be honest: the conditions on the day I tested the Nokia 9 PureView were pretty lousy. Clouds were hanging low in the sky and rain threatened us for most of the morning, leading to lots of distinctly gray images. Even so, I was impressed with the clarity and nuance in most of my shots — they were detailed to the point where I kind of got tired of seeing my own pores. Aside from stitching that image data together, the Nokia 9 didn't seem to unnecessarily saturate my photos like other smartphones tend to, either. That's not to say you won't find bright colors here; it's just that they never feel out of touch with reality.

I never noticed much shutter lag either, because all the photos are processed in the background. That's a very good thing, because the process can take a quite a while — it about took 5 to 6 seconds to spit out a standard, Auto photo, but using the camera's sophisticated Depth mode adds a significant amount of processing time. Some photos took well over 10 seconds to process, though again, that process remains mostly invisible to the photographer.

In fairness to HMD, the software on the phone I was working with wasn't final yet, and the company says it'll eventually work much faster. We'll have to see about that. If nothing else, though, you'll have some serious tools in case you want to spruce up those photos even further -- a partnership with Lightroom means you'll have special, Nokia 9 specific lens profiles to help fine-tune those shots.

That extra software can't fix my biggest pet peeve so far: the camera app itself. It presents itself with a fairly straightforward interface, but it can be really difficult to find exactly the option or setting you're looking for. Then again, HMD has made it clear that the PureView is a photographer's phone, so maybe I shouldn't be surprised that it's not particularly intuitive. Ultimately, though, it's pretty clear that the version of the Nokia 9 I played with just wasn't ready for people yet.

The Nokia 9 PureView represents a fascinating step forward in the field of smartphone photography, and if all goes well with this phone, you can believe HMD Global wants its other phones to use it too. Who knows: we might be looking at the future of the smartphone camera experience right now. It just needs a bit of polish first.

All products recommended by Engadget are selected by our editorial team, independent of our parent company. Some of our stories include affiliate links. If you buy something through one of these links, we may earn an affiliate commission. All prices are correct at the time of publishing.
Nokia 9 PureView hands-on: A taste of our photographic future
camera
cameras
gear
hands-on
hmd global
light
mobile
mwc
mwc2019
nokia
nokia 9