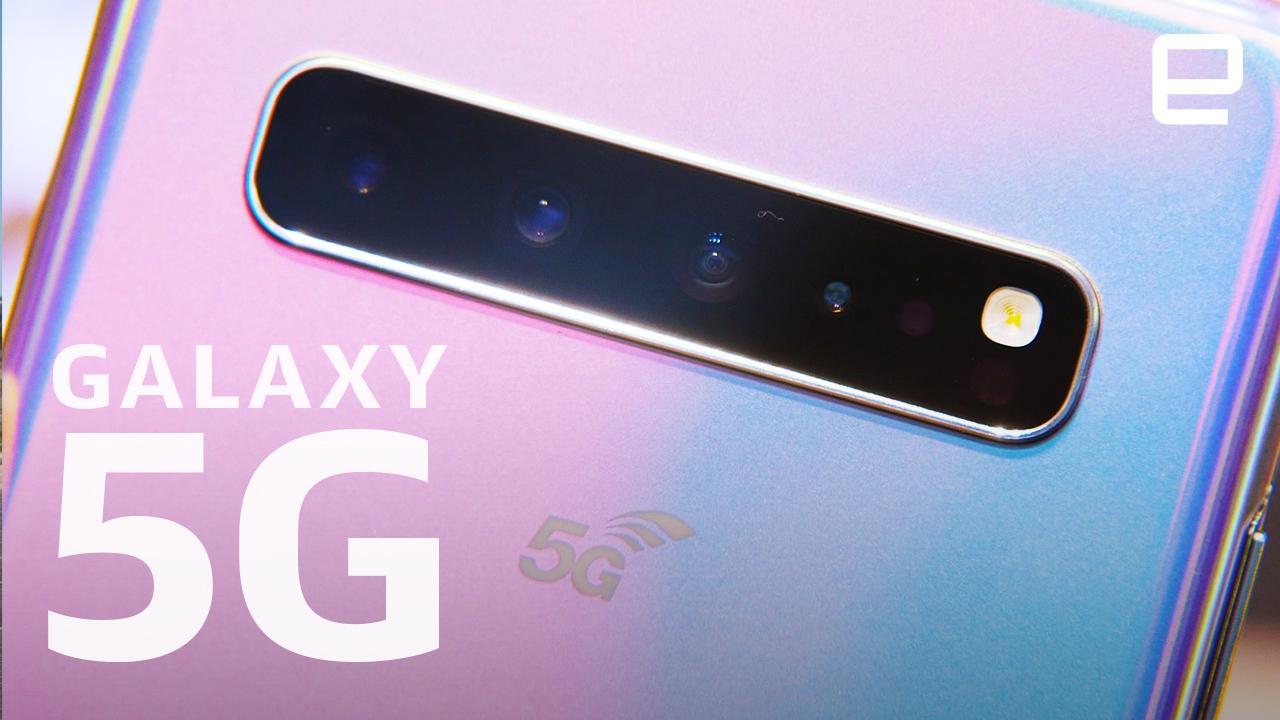 The first time we got to spend a little time with Samsung's new Galaxy S10 5G, it came with a serious caveat: We couldn't actually turn the thing on. (Annoying, right?) As a result, the company's first 5G phone became the S10 we had the least amount of first-hand experience with, and that simply wouldn't do. Thankfully, Samsung has a booth full of them here at Mobile World Congress, not to mention a small-scale 5G network for demo purposes. (More on that in a moment.)

First, the basics. The 5G S10 is roughly the same size and shape as last year's Galaxy Note 9, except that it's noticeably thinner -- it doesn't have to house an S Pen, after all. Really, we're only talking about a difference of one millimeter, but it goes a long way in making sure the S10 5G and its huge, 6.7-inch Dynamic AMOLED screen are comfortable to use for long periods. (In case you were wondering, this phone is also just as thick as the standard S10 and S10 Plus.)

As you might expect, we're mostly looking at a straight retread of the other Galaxy S10s. That is, until you get to the cameras — there are new, time-of-flight cameras baked into the S10 5G's front and back, and we were originally told that they're there to allow for the kinds of improved AR experiences that 5G networks can provide. Fair enough, I guess.

The most immediate use for these depth-sensing cameras, though, is shooting videos with background-blurring bokeh on the fly. It's not exactly the newest idea — similar features have popped up on both the Huawei Mate 20 Pro and LG's new G8 ThinQ — but Samsung's implementation feels like the best of them. Sure, the space around the person I wanted in focus tended to fluctuate, so people in the background I wanted to ignore would occasionally appear sharper than I would have liked. Even so, it seemed to keep a better lock on my intended subject than other phones I've tested. For now, at least, the feature seems to struggle when you're using trying to shoot live bokeh video through the selfie camera; my video producer Brian should've been out of focus when he craned his neck around my shoulder, but he appeared clearly. Well, we're not entirely sure. The thing with these demos is that they need to be taken with a grain of salt. All of the Galaxy S10 5G units Samsung had on display were running the same MLB demo app, which allows you to view streams from different positions around the field, and even rotate your view around players in key positions. (You can, for instance, swing around a batter right as he smashes one downfield.) I don't even like baseball, but if this represents the future of watching the sport, I'd happily give it a chance. MLB's test app doesn't attempt to replicate the experience of being at a baseball game; it wants to give you perspectives you'd never get by being there live in real time.

On most of those demo phones, the baseball video streams were stored locally. But one of them was plugged into a DeX dock and connected to an external monitor. This was the phone that was running on Samsung's homemade 5G network. There is, however, no way to definitively prove that. Samsung declined when asked if we could run a speed test or visit the company's 5G network setup on the other side of the convention hall.) It's a shame, though I understand Samsung's rationale: Trade shows are hardly ideal for wireless connectivity, and the speeds I probably would've gotten in a speed test wouldn't tell the full story. Fine. Ultimately, Samsung's demo was more about the kind of unique experiences 5G can provide on this version of the S10 than it was about proving that 5G networks work as fast as advertised. Consider me cautiously optimistic.

It's pretty clear that, despite all the talk going on here, we're not going to get a great sense of what these new networks are capable of at MWC. That's alright -- we'll get our chance soon. What's also clear is that this version of the Galaxy S10 is probably the most polished of any of the first-generation 5G phones we've seen so far at the show.

In this article: 5g, galaxys10, gear, hands-on, mobile, mwc2019, samsung
All products recommended by Engadget are selected by our editorial team, independent of our parent company. Some of our stories include affiliate links. If you buy something through one of these links, we may earn an affiliate commission.