HTC's blockchain phone can now be bought with real money

The secure wallet is now compatible with the Opera browser, too.

HTC is taking its blockchain phone a little more mainstream. Today, the company has announced that the Exodus 1 can be purchased for 750 US dollars. That's right, traditional money. The kind that can be used in any store across the United States. Until now, the beleaguered phone manufacturer has only accepted Bitcoin (BTC), Ether (ETH) and Litecoin (LTC) as tender. Presumably, that was a choice (and not just a lame marketing stunt) to ensure early adopters were open-minded crypto enthusiasts. In addition to USD, the company is adding the Ethereum-powered Binance Coin (BNB) as a way to acquire the niche handset.

From afar, the Exodus 1 looks like a normal mid-to-high-end smartphone with a transparent cover. It has a 6-inch, Quad HD+ display and is powered by a beefy Qualcomm Snapdragon 845 processor, 6GB of RAM and a 3,500 mAh battery. The phone also ships with 128GB of internal storage and four cameras -- a dual system on the back (12MP and 16MP) and two selfie snappers (8MP and 8MP) with "natural bokeh," according to HTC. 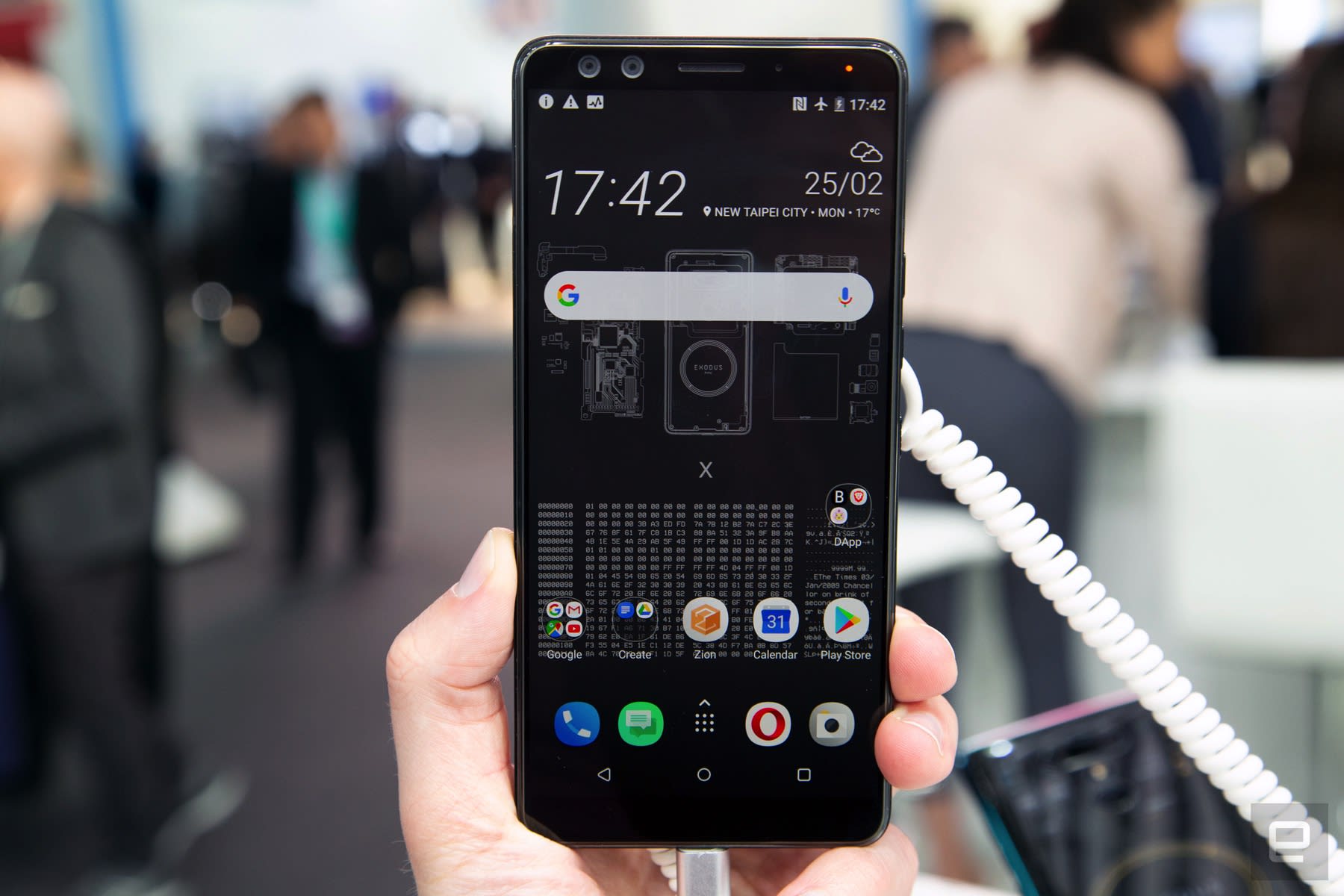 The headline feature, though, is a "secure enclave" that's kept separate from the processor and Android operating system. It can be used to store crypto keys that are normally stored in a software wallet like Mycelium or USB-style devices built by companies such as Ledger and Trezor. Some even write them down on pieces of paper and lock them away in old-fashioned vaults and faraday cages. With the Exodus, HTC is trying to strike a balance between security and convenience. The enclave means you always have the codes with you, however they're not connected to the operating system and are, therefore, harder for hackers to steal.

The enclave works with a HTC-developed wallet called Zion. The company says it can be used to store, send and request a number of cryptocurrencies including Bitcoin, Ether and Litecoin, as well as a number of Ethereum-based ERC-20 and ERC-721 tokens. Today, HTC has announced that Zion is now compatible with Opera's internet browser. The developer has been testing a built-in crypto wallet since last July that allows users to pay for goods and services in a similar manner to Google and Apple Pay. Now, Exodus owners can sync their accounts and use the Secure Enclave as a protective layer for their online shopping and crypto-transactions.

HTC believes the partnership will facilitate "Web 3.0," a decentralized internet where people have greater control over their finances and personal data. Phil Chen, Decentralized Chief Officer at HTC said: "​We are in a crisis of giving away our data and digital identity for likes and cheap endorphins, surrendering all of our power to the big data monolithic tech giants that mine that data for artificial intelligent agents, advertising revenue and even more nefarious means​." Charles Hamel, Project Lead at Opera Crypto added: "We are very proud to be the default browser on the Exodus and together define a new standard for usability and security of crypto."

The Exodus phone is a strange gamble for HTC. The company's phone sales are falling and revenue has been in decline for some time. A crypto-centric handset, while unique, feels like it has a limited audience. It probably doesn't help that the value of most cryptocurrencies has fallen since its dramatic peak in late 2017. Cryptocurrencies still have potential, but it's lost the public furore that could have made the Exodus a breakout hit.

All products recommended by Engadget are selected by our editorial team, independent of our parent company. Some of our stories include affiliate links. If you buy something through one of these links, we may earn an affiliate commission. All prices are correct at the time of publishing.
View All Comments
HTC's blockchain phone can now be bought with real money
Binance Coin
Bitcoin
Cryptocurrency
Ethereum
Exodus
gear
htc
Litecoin
mobile
mwc2019
Smartphone