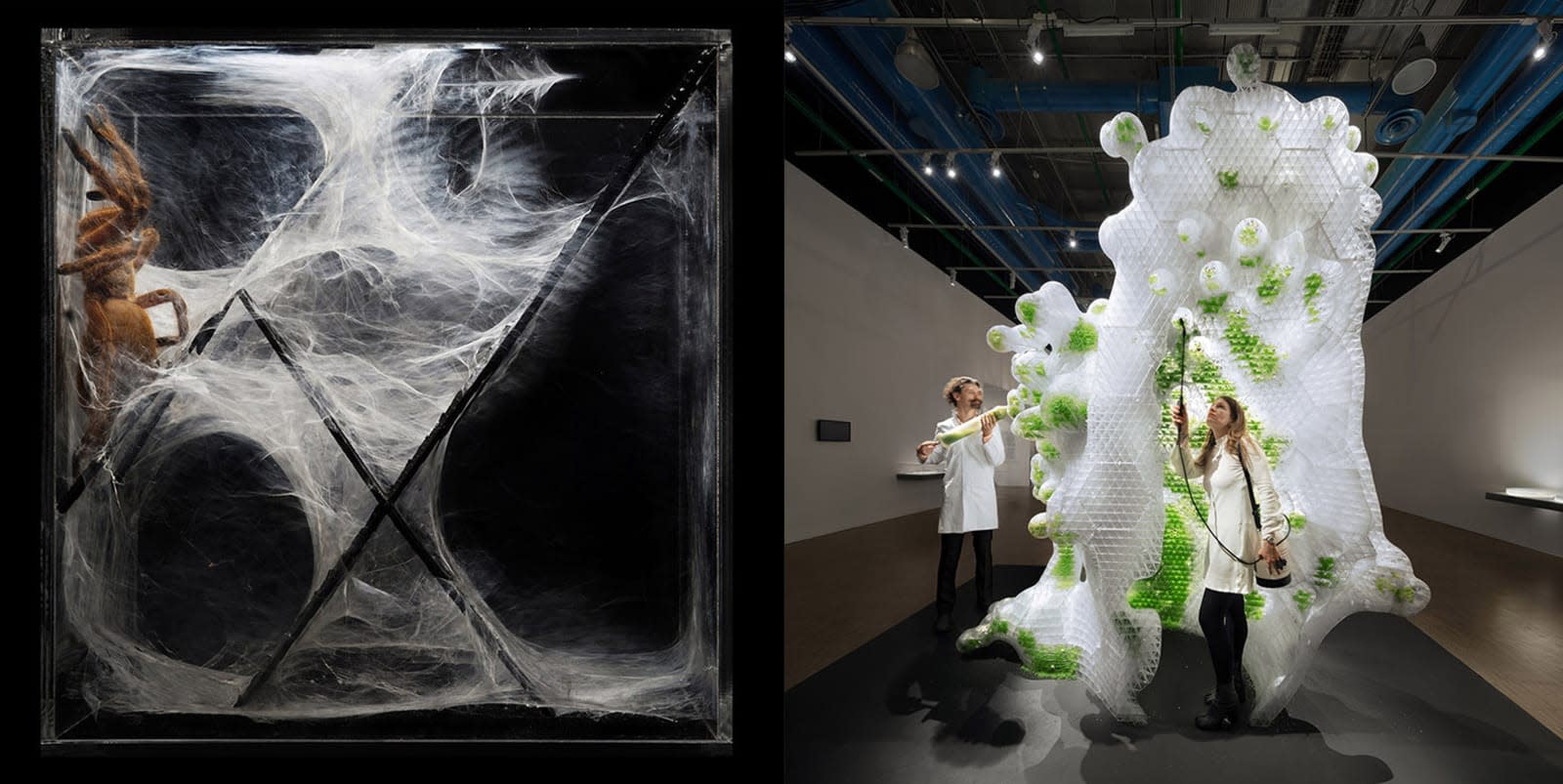 Two new works from the Factory of the Living exhibition at the Pompidou Center in Paris show how digital technology is influencing art and biology. Both pieces were developed in "collaboration" with living organisms:The first, H.O.R.T.U.S. XL astaxanthin.g, from ecoLogicStudio was built using cyanobacteria, and the second, Urban Morphogenesis Lab's XenoDerma, gets an assist from an asian fawn tarantula.

The idea behind XenoDerma is to see inside a spider's mind, or at least see how a spider perceives the world. Spiders weave webs not just to trap food but for protection, sleeping and living. They're highly attuned to the smallest changes and vibrations in their webs, which essentially become an extension of their own nervous systems.

The creators of the project, headed by Claudia Pasquero, wanted to gain a more "cosmological" idea of urban architecture and structures by enlisting a creature with its own idea of space. As such, they 3D printed transparent cubes with different lattice structures to see how the creatures would adjust.

The resulting webs give us a peak into a spiders mind, and could point the way to new forms of architecture. "Mobilizing the alien spatial intelligence of nonhuman entities like spiders will give us a new insight in the possible construction of a multiheaded city," the creators said. 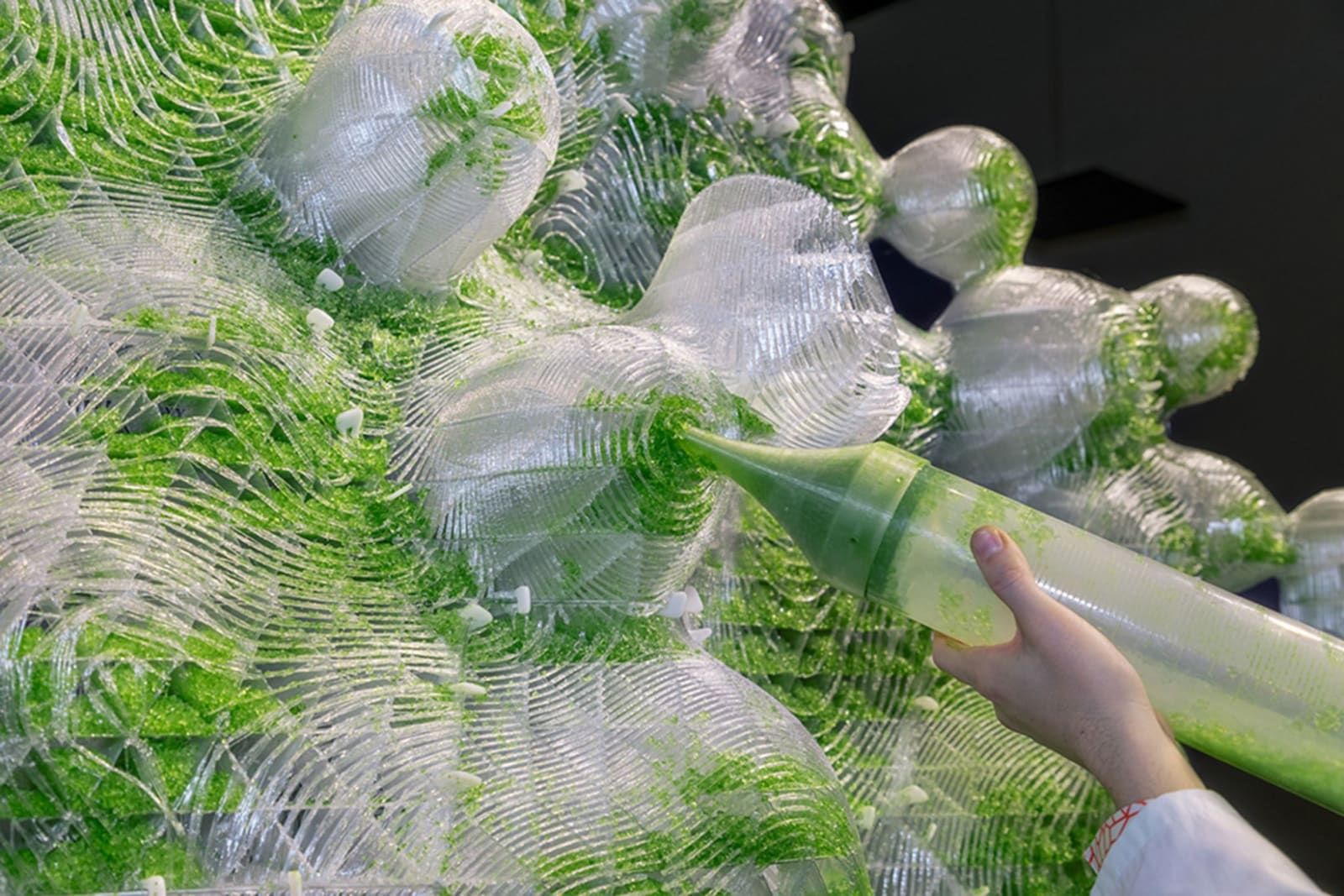 H.O.R.T.U.S. XL Astaxanthin.g, meanwhile, was inspired by the morphology of coral reefs. The team first 3D printed structures that could be injected with photosynthetic cyanobacteria. They're composed of 185 different components weighing 271 kilograms (600 pounds), printed for 1,780 hours on Delta WASP 3d printers. Everything was designed to optimize radiation exposure to maximize growth of the organisms.

"The visitors of the exhibition will move freely around and inside the installation, observing the bio-digital landscape made of protuberant 3D printed geometries and engaging in an exchange with the micro-algae," notes the ecoLogicStudio team, headed by Marco Poletto. "The micro-organisms will absorb the carbon dioxide produced by human breathing and transform it into oxygen in a process that also creates biomass, useful for the production of bioplastic material and energy."

Arty ideas of bio-intelligence aside, the Pompidou exhibition actually looks pretty cool and very interactive, judging by the video presentation (below). It's mainly asking what we should do with artificial life once we create it. As the exhibition's curators put it: "Biotechnologies are now a medium used by artists, designers and architects. If digital simulation tools allow us to recreate the living, we must ask ourselves the question: how do we program the living?"

Update 3/3/2019 5:00 PM ET: The article title was updated to better reflect the French meaning of La Fabrique du Vivant. It originally read The Fabric of the Living, but as commenter Robert pointed out, "fabrique" is a class faux ami (false friend) -- it means factory, not fabric. (Thanks Robert)

In this article: art, BioDigital, entertainment, Exhibition, FactoryOfTheLiving, LaFabriqueDuVivant, Pompidou, Sculpture, TheBigPicture, thenewbigpicture
All products recommended by Engadget are selected by our editorial team, independent of our parent company. Some of our stories include affiliate links. If you buy something through one of these links, we may earn an affiliate commission.