The pinnacle of high society is the Rolls-Royce. Only the richest TV and movie characters roll up in a Rolls. When they hop out of the back, you know that they're the heirs to a diamond mine or a diabolical supervillain with a huge bank account. So it's not surprising that the back of the first SUV from the automaker exudes an aura of exclusivity that transcends automobile segments. But they let me drive it all the same.

The $325,000 Cullinan is an exercise in combining the latest automotive tech with old-school money. It's named after the largest diamond ever discovered. That gem sits embedded in the Queen of England's Imperial State Crown. Sure, the name is a bit on the nose for a high-end British brand, but even with that in mind, it's tough to explain the feeling of driving the Cullinan.

It's like floating in a glassy swimming pool filled with Evian. Potholes, cracks in the asphalt, even the puddles that grow larger by the second (thanks to an uncharacteristic rainstorm in Palm Springs), were inconsequential to the luxury SUV. Sure the tires bounced up and down, but the suspension and Rolls-Royce's "Magic Carpet Ride" technology smooth literally everything out. 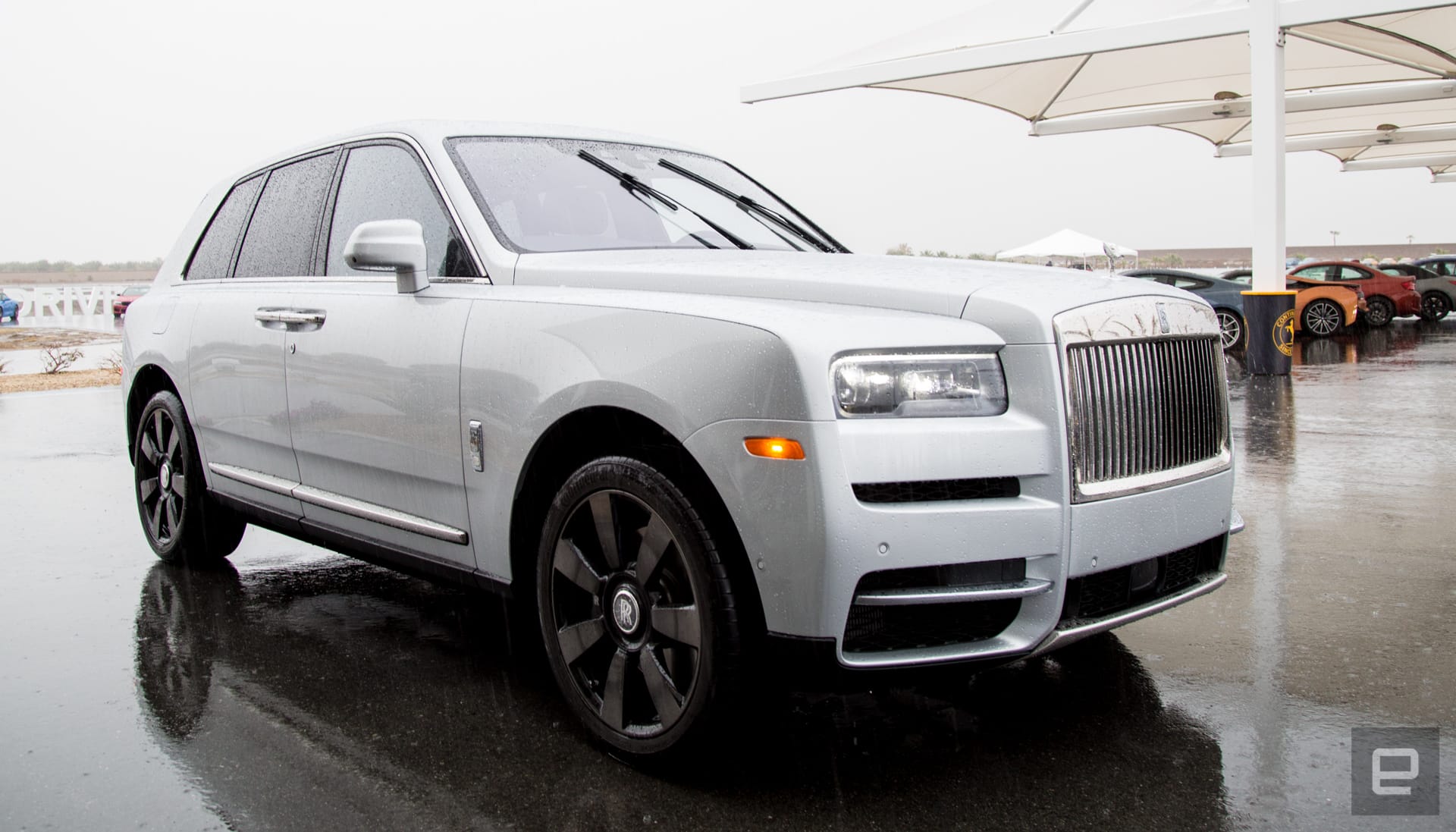 At one point, I was aiming for holes and small ponds to get the reaction I expected from driving a vehicle into a rough patch. Nope. The SUV made sure I was comfortable as possible while overlooking the bonnet of the car. Which brings me to the fact that while other automakers curve the hood of their vehicles so they disappear. Not Rolls-Royce. You see the entire great expanse that ends with the famous Spirit of Ecstasy hood ornament.

Under that hood is a 6.75-liter twin-turbo V12 engine that delivers 563 horsepower and 627 foot-pounds of torque. That gargantuan engine purrs lightly while cruising. It also helps that the vehicle has seven layers of soundproofing. But the powerplant can propel the luxury estate on wheels with an impressive amount of gusto.

So it can put the hammer down when needed, but that's the Rolls-Royce way. It's almost blasphemy to stomp the accelerator while sitting behind the wheel surrounded by stitched leather and a large dash that has enough wood to build a beautiful shed in your backyard. You don't "go fast" in a Rolls. Everyone waits for you while you leisurely make your way to your destination.

The infotainment system goes all-in on that feeling of upper-class decor. A minimalist affair that delivers what a modern oligarch would expect from their Rolls -- and it also supports CarPlay!

The Cullinan also ships with the requisite drivers' assist features. Unfortunately, I didn't have a chance to properly put it through its paces, but it's more than likely on par with what BMW (the parent company of Rolls-Royce) has on the road. 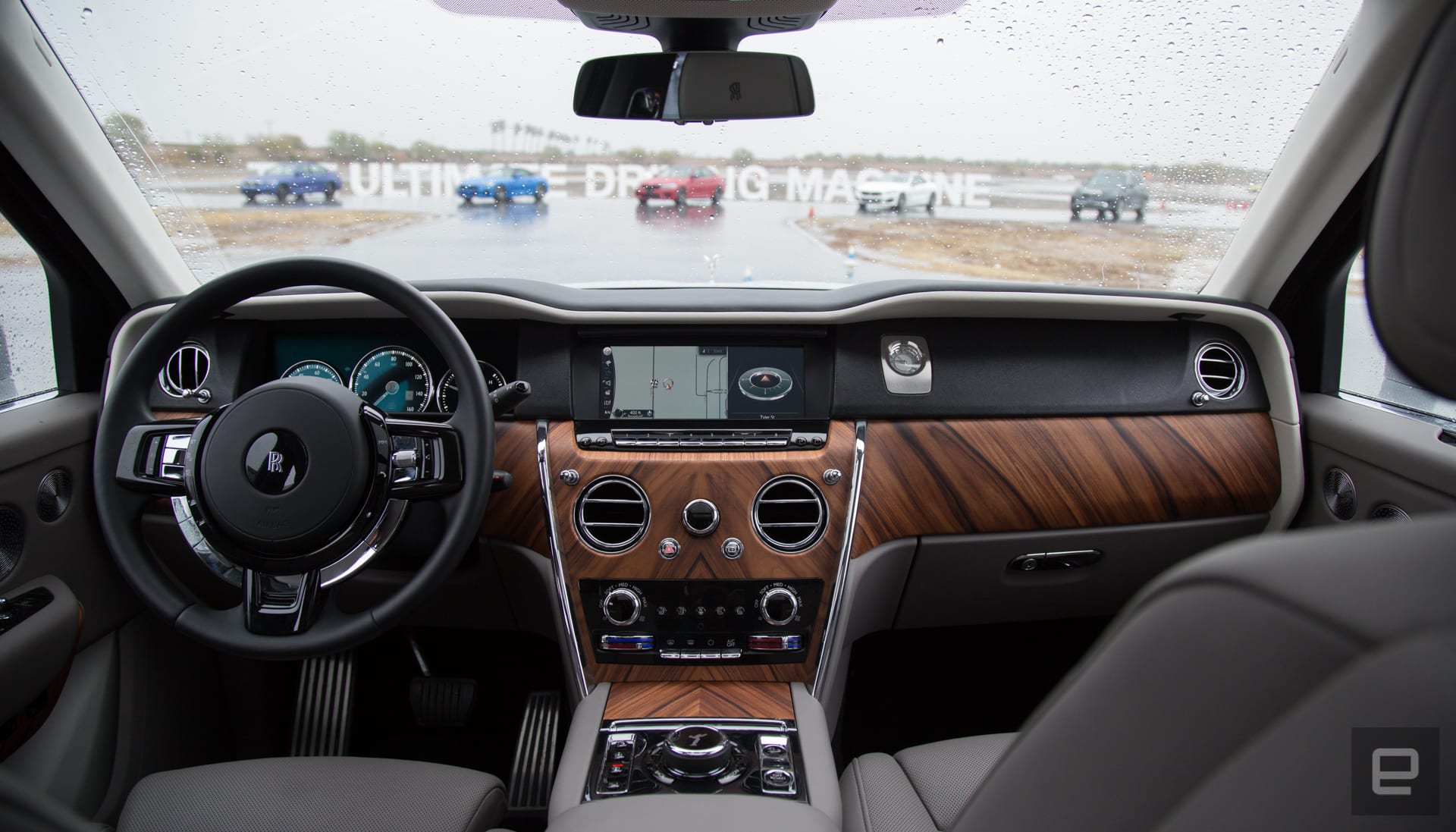 The exquisite-looking knobs and switches on the dash are just begging to be flipped and turned with the automaker opting for a more refined labeling system than pretty much every other car on the road. The climate control fan doesn't have a "low" feature. Instead, it's "soft." There's nothing "low" about a Rolls, apparently.

But the real moment where you realize you're riding in the pinnacle of automotive luxury is when you're in the backseat. A Rolls-Royce, after all, is meant to transport the rich and powerful. Sure they might drive themselves sometimes, but to make a real entrance, you emerge from the back seat of the Cullinan.

It's, of course, more comfortable than any car I've ever sat in. But more importantly, it's super-nerdy. Yes, it's classy and beautiful, but if the backseat of a car has a small desk table (imagine a very fancy seat-back table) and tablet that emerge with the push of a button, that's nerdy. With it, you can control the infotainment system of the vehicle, including the navigation. Instead of reading a paper copy of The Wall Street Journal, today's tech-savvy affluent passengers will be firing up the latest podcast or financial news from the comfort of their very own tablet which, like the front display, is a reskinned version of BMW's.

That should make potential owners sigh with relief. BMW has a great infotainment system UI, and it makes sense for Rolls-Royce to use that instead of trying to roll its own. Let the parent company do all the heavy lifting and the ultra-high-end brand can just adjust it for its customers. Whether you're in the back or front seat, the last thing you want is a system that's not mature ruining your experience.

My participation involved opening and closing the little workstation again and again. While the inside is an impressive collection of leather, shiny metal and wood brought together to resemble the library in a British manor, the exterior is more subdued.

Yes, the giant wheels, bonnet and front of the vehicle are pure Rolls, but overall it seems like the SUV needs something to truly convey the same styling of the automaker's other vehicles. In other words, it's a bit blocky. 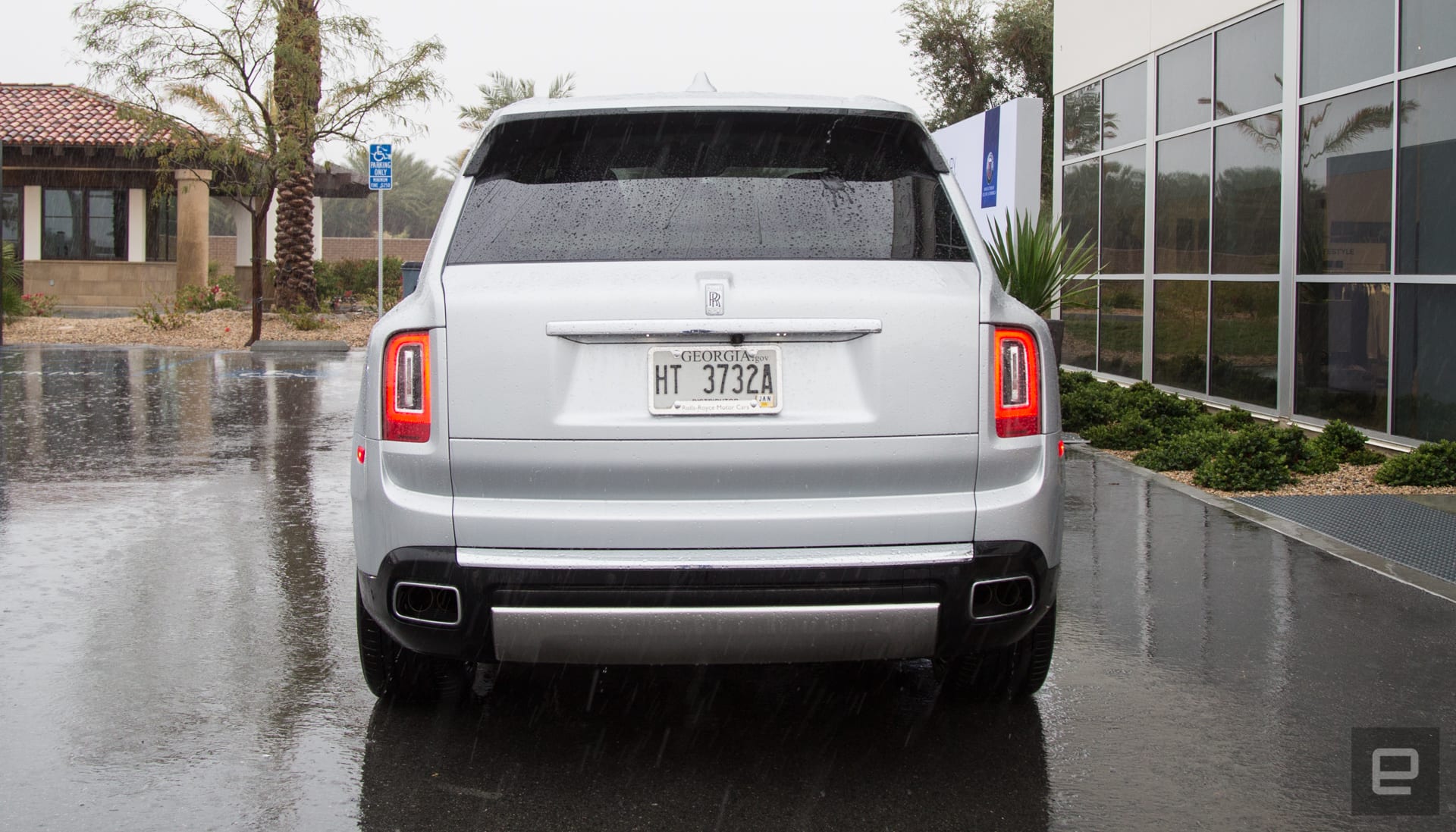 Overall, the Cullinan is a wonderful mix of old-country class fused with impressive technology. It's like an iPad wrapped in an oak and leather case that just happens to massage your hands and cost more than your first car. Which is exactly what the Rolls-Royce buyer wants. That, and a reduction in the estate tax.