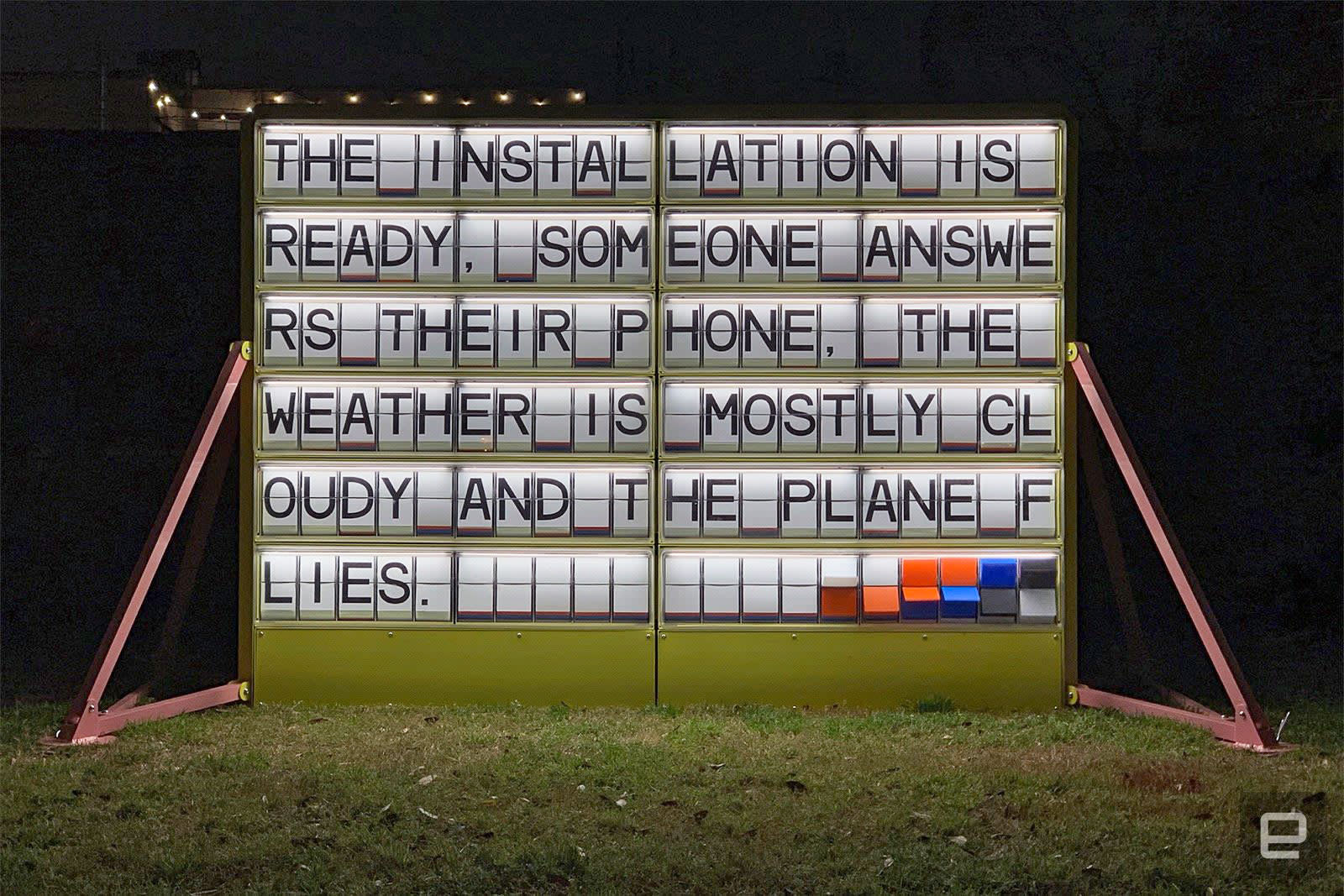 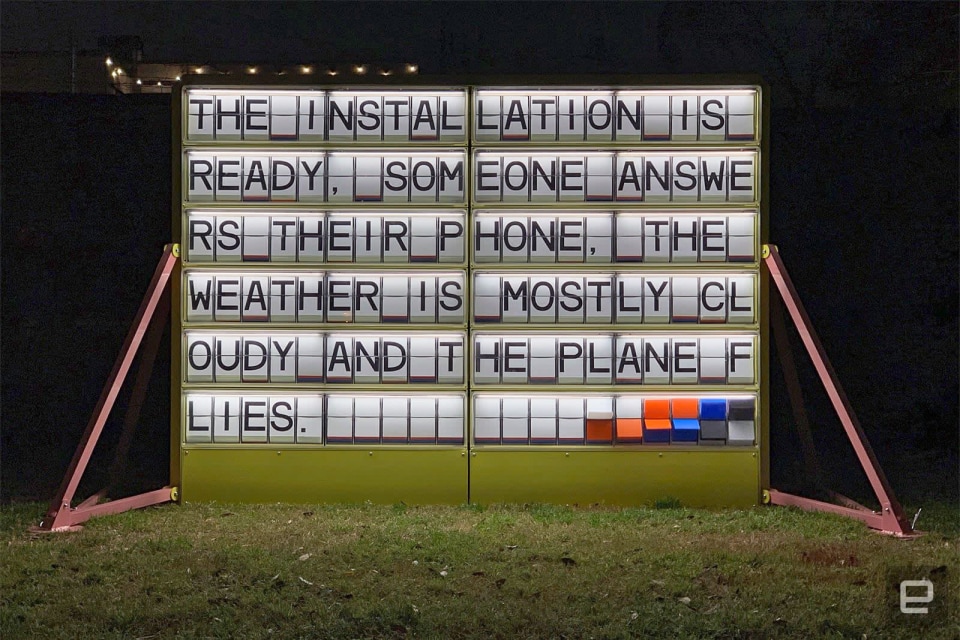 Just opposite the Austin Convention Center there's a mechanical split-flap display -- the kind you might see in a 20th century train station -- propped on a slim strip of grass, fluttering off terse verses like this one from 11:26 AM on Friday:

SOMEONE BUYS A TICKET,
THE JURY HAS MADE A DECISION,
THE ARTIST PREPARES
AND THE PRICE OF COTTON RISES.

It was an echo of some of the things happening in Austin at that moment, a kind of live poetic commentary on the commonplace. Every minute, the board refreshed; it continues to generate 1,440 poems each day.

The installation, called "EVERY THING EVERY TIME," is the work of Naho Matsuda, a German-Japanese artist and designer based in London, and produced by FutureEverything. The work is in Austin for South by Southwest, its third iteration, following showings in Newcastle and Manchester in the UK.

Matsuda has around 200 public data points that are turned into verses in real time, including the local humidity levels, price of gold and President Donald Trump's Twitter activity. There are also lines that don't connect to an API but come from schedules Matsuda manually inputted like the opening times of Franklin Barbeque, Austin's IBM office or a SXSW panel.

Then there are the creepier verses: "the woman reads," "no one confesses," "the baby is born."

Those come from "fluff data," Matsuda says, and form about a fifth of the lines. Some are extrapolated from official statistics (for example, how many babies are born each day in Austin); others are proxies for data sets that actually exist but she didn't have access to (a line about idling drivers refers to Uber and Lyft drivers). The goal is for the algorithmic poetry to encapsulate everything that the smart city could potentially see.

In sum the poems tell a story about the quotidian details that form the city of Austin -- the gay bars, boil water notices, bats, moonlight towers.

Stripping the data of its functionality, Matsuda says, makes it universal. An integer saying how many babies were born last month is a statistic; "the baby is born" is human, individual, emotional.

As the poems whirl into existence, you can slow down and realize what else is happening all around you, outside your head. The poetry is a conduit to the rest of the city at that very moment. You see how apparently neutral data points through one lens -- a car crash that just happened -- can be deeply personal, even life-altering, to the individual.

The playfully neon green and pastel pink mechanical board forces you to meet its pace with a sense of flurried anticipation around every letter. We expect instant gratification with digital technology but the physicality of this device roots it in the real world. (Matsuda said she wanted the speed to be "a bit annoying slow"). Yet when the poem finishes it hangs only for a second before disappearing -- the ephemerality forces your attention on it, too.

As in other artist commentaries on tech, the feelings of interconnectedness compete with an unavoidable critique of surveillance -- in this case, where data comes from, what little things it notices, how it encourages us to monitor each other. There's an uneasy cognizance that outside Matsuda's project there are smart city systems that process us as data points, and not usually just to craft poetry.

"My hope was to be on the edge of being playful but also uncanny or a bit creepy and triggering those questions," Matsuda said.

The resulting verses -- with what Matsuda calls their "weird juxtapositions" -- can be banal, touching, clinically dehuman. Which kind of sounds like an average day. Mundane life can be poetry, too. So much happens all the time.

In this article: art, data, gear, naho matsuda, privacy, surveillance, sxsw, SXSW2019
All products recommended by Engadget are selected by our editorial team, independent of our parent company. Some of our stories include affiliate links. If you buy something through one of these links, we may earn an affiliate commission.